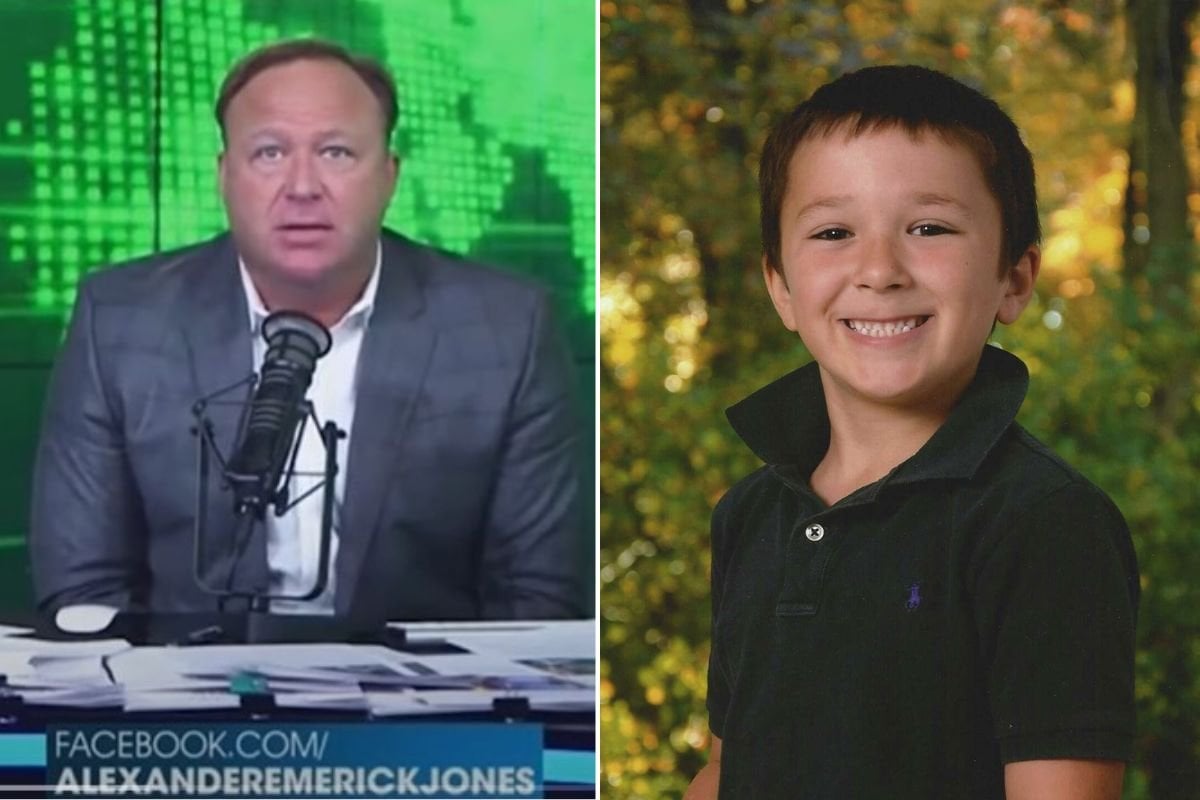 "Jesse was real. I am a real mum," Scarlett Lewis told a courtroom, as she stared into the eyes of a prominent conspiracy theorist.

"There are records of Jesse's birth. Of me. I have a history," she continued, her voice exasperated but firm.

Lewis found herself sitting in that witness box on Tuesday, because according to the man in front of her, she's a liar.

She belongs to the 'deep state.'

Six-year-old Jesse Lewis was one of 20 children aged six and seven murdered in the Sandy Hook Elementary School shooting alongside six teachers, on December 14, 2012, in Newtown Connecticut.

But Alex Jones, a conservative, alt-right radio show host and prominent conspiracy theorist thinks it was a hoax.

In fact, on the day of the shooting - as the world reeled from the tragedy before them - Jones spent 50 minutes on his show, InfoWars, telling listeners, "Why did Hitler blow up the Reichstag? To get control. Why do governments stage these things? To get our guns! Why can't people get that through their head?"

He didn't stop there. For years, he and his fans have harassed the grieving relatives of the Sandy Hook massacre claiming they are "crisis actors" in a government plot.

Jesse's parents, Lewis and Neil Heslin, have been fielding death threats since their son died, describing the ongoing trauma and harassment as a "living hell." 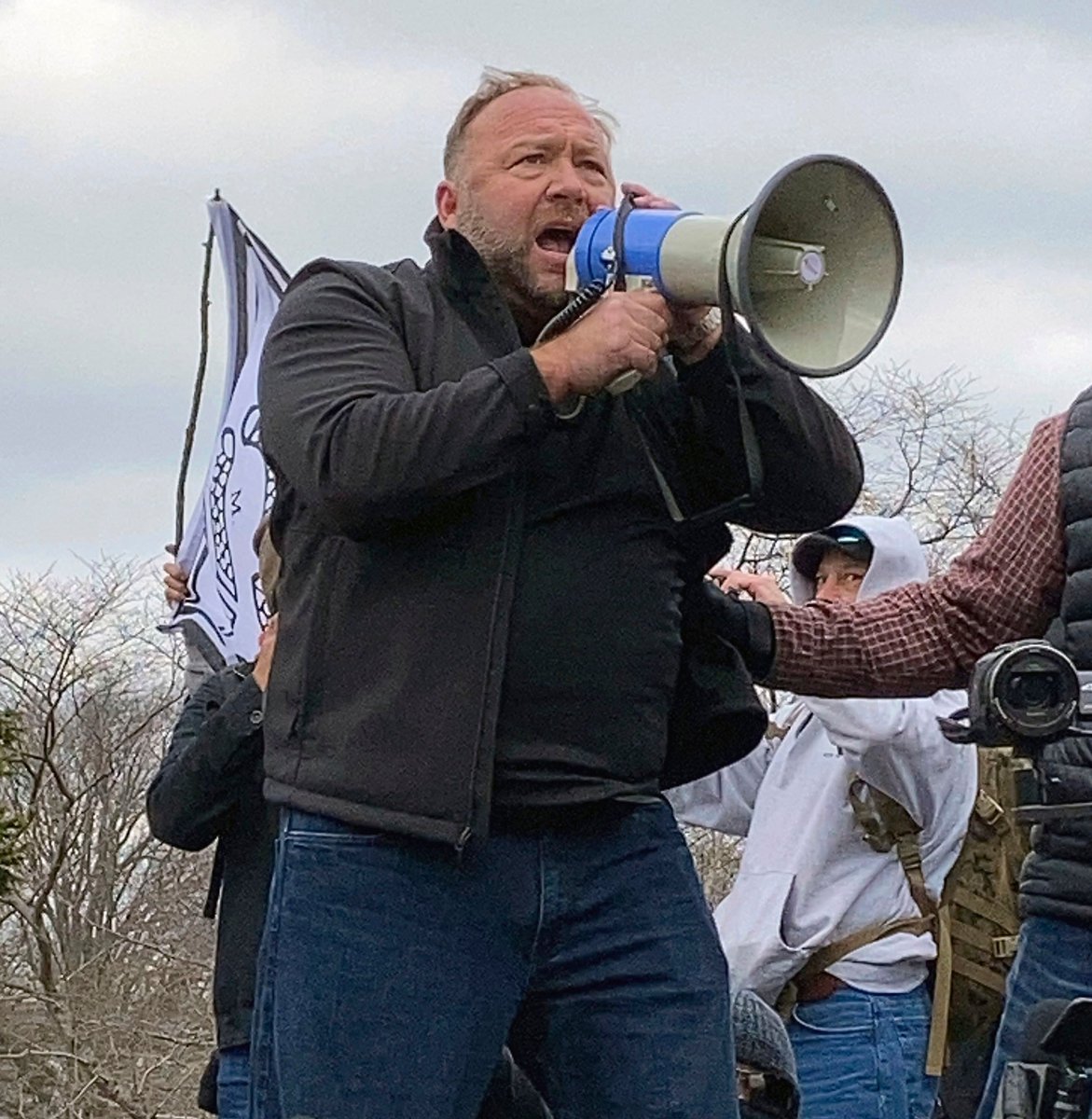 Jones has been spreading conspiracy theories about Sandy Hook since 2012. Image: AAP/STRMX.

"I can’t even describe the last nine and a half years, the living hell that I and others have had to endure because of the recklessness and negligence of Alex Jones," Heslin said.

While he's not sure if Jones was the original instigator of the conspiracy theories, he claims the radio shock jock "lit the match and started the fire."

Heslin told the court how he lay holding his son with a bullet hole through his head in a horrendous final moment with his little boy.

But according to Jones, and his show, Heslin never held Jesse. That was a lie.

In a 2017 broadcast, Jones demanded to know if Heslin actually held his son’s body and actually observed a bullet hole in his head. 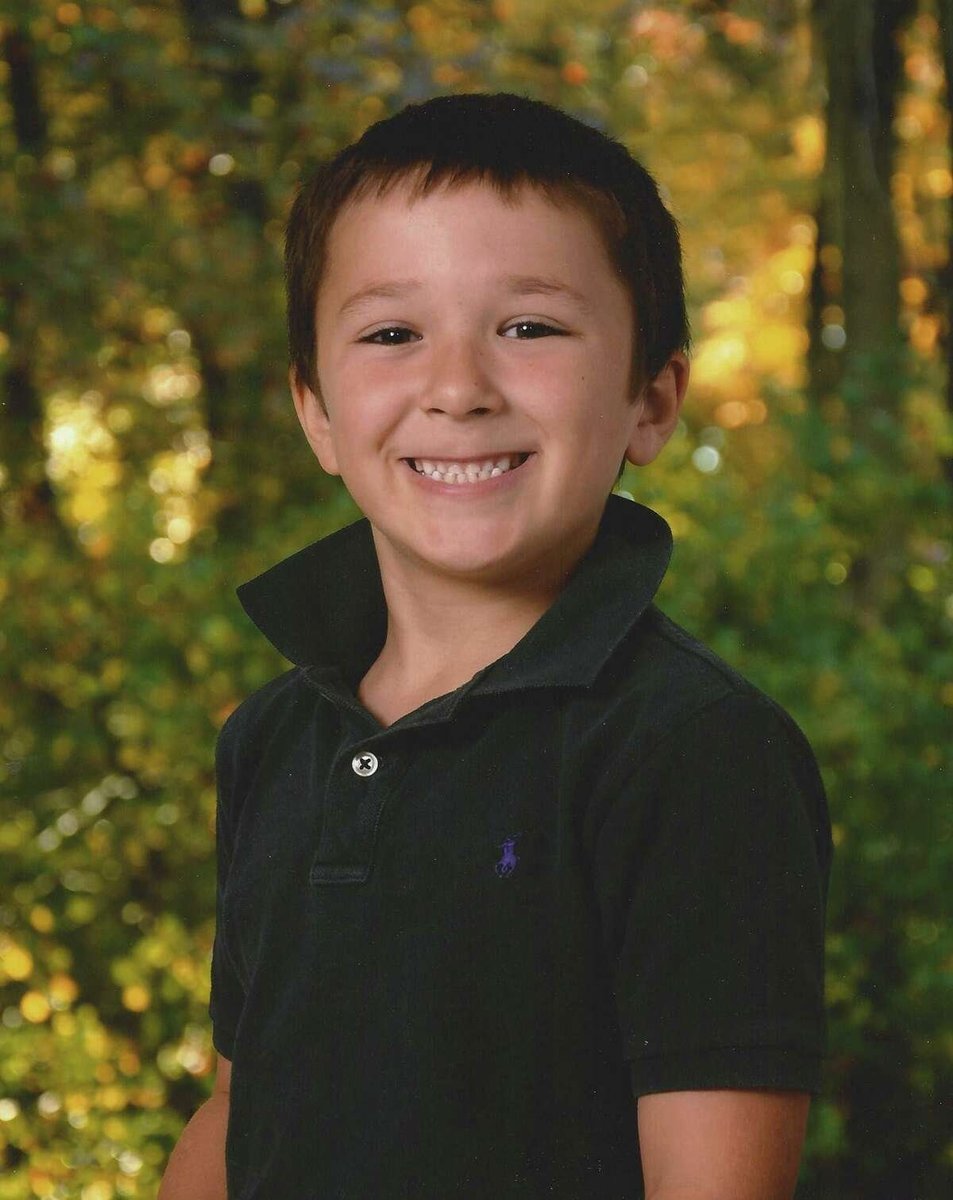 "I am a mother first and foremost, and I know you're a father. My son existed... Do you think I’m an actor?"

Heslin and Lewis are among several Sandy Hook families who have filed several lawsuits alleging that Sandy Hook hoax claims pushed by Jones have led to years of abuse.

On Thursday, a Texas jury ordered him to pay more than US $4 million (significantly less than the $150 million sought) to Jesse's parents alone, in compensatory damages.

And now the jury has told Jones to surrender another US $45.2 million to the grieving family.

"I hope that I did that incredible courage justice when I was able to confront Alex Jones, who is also a bully," Scarlett Lewis said after court Friday, according to the Associated Press.

"I hope that inspires other people to do the same."

However, it could be a while before the plaintiffs receive anything. Jones’ lead attorney, Andino Reynal, told the judge he will appeal.

Jones was also due to stand trial in a similar suit in September, but that case is now on hold after he filed for bankruptcy.

"I never intentionally tried to hurt you."

In 2019, with multiple lawsuits from families before him, Jones gave an explanation for his conspiracy theories.

"I, myself, have almost had like a form of psychosis back in the past where I basically thought everything was staged, even though I've now learned a lot of times things aren't staged," he said during a sworn deposition.

"So I think as a pundit, someone giving an opinion, that, you know, my opinions have been wrong, but they were never wrong consciously to hurt people."

He said it was the "trauma of the media and the corporations lying so much" that caused him to distrust everything.

Jones has also claimed other horrific attacks, like 9/11 and the Boston Marathon bombing, were nefarious government plots aimed at tightening control over Americans.

During his 2022 testimony, Jones apologised, telling the court Sandy Hook was "100 per cent real."

"I never intentionally tried to hurt you," Jones said, addressing Jesse's parents. "I never even said your name until this case came to court. I didn’t know who you were until this came up."

Again and again in court, his lies were undone before the jury.

BREAKING: Alex Jones’s lawyers accidentally sent full download of his phone to the Sandy Hook parents’ lawyers, failed to assert privilege or claw it back in any way.

The parents now have ALL of Jones’s texts — including ones about Sandy Hook he stated under oath he didn’t have.

Even as the trial was preparing to go ahead, Jones was telling his show that it was "rigged" against him, and that the jury pool were people who "didn't know what planet they're on."

He said the lawsuit was an attack on his First Amendment rights.

LAWYER: “You’ve been broadcasting a picture of our judge on fire, correct?”

*Shows pic of him broadcasting judge on fire* 🤦🏻‍♂️ pic.twitter.com/tIwKuwT4cN

These conspiracy theories, fuelled along by Jones, have snowballed over the years, leaving dozens of grieving families shattered.

They were gunned down by 20-year-old Adam Lanza, who used a rifle to carry out the massacre before killing himself. 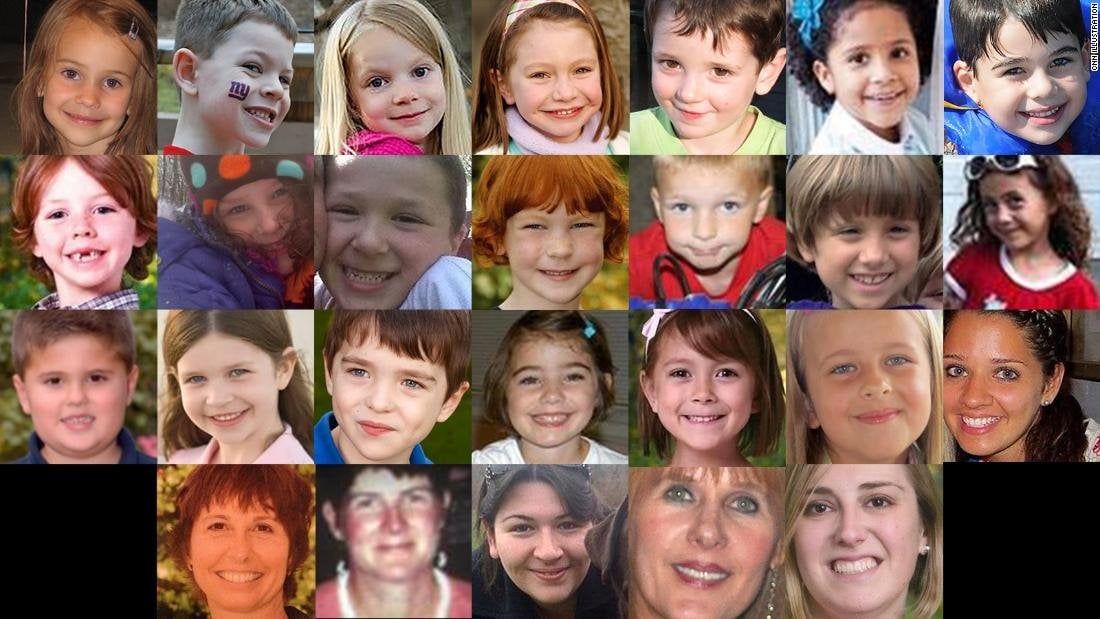 The victims of the 2012 Sandy Hook shooting. Image: CNN.

These parents should never have had to appear in a courtroom in the first place.

But this is what happens when conspiracy theories are left to fester and grow.

Grieving families are forced to prove the worst day of their lives, actually happened.

Reply
Upvote
2 upvotes
As if the initial incident was traumatic enough for people, then it takes nearly a decade of additional pain to the victims for a ruling to be made. Good end result but rather than just financial compensation that he may be able to dodge care of dodgy accountant, a full time prison sentence would have been more apt for both punishment for the offender and to stop people from doing something like this in the future. Unbelievably disgusting behaviour and despite the result and case does he actually admit personal responsibility or just avoid it by comments like I never intended to cause you any pain.
C
cat 7 days ago