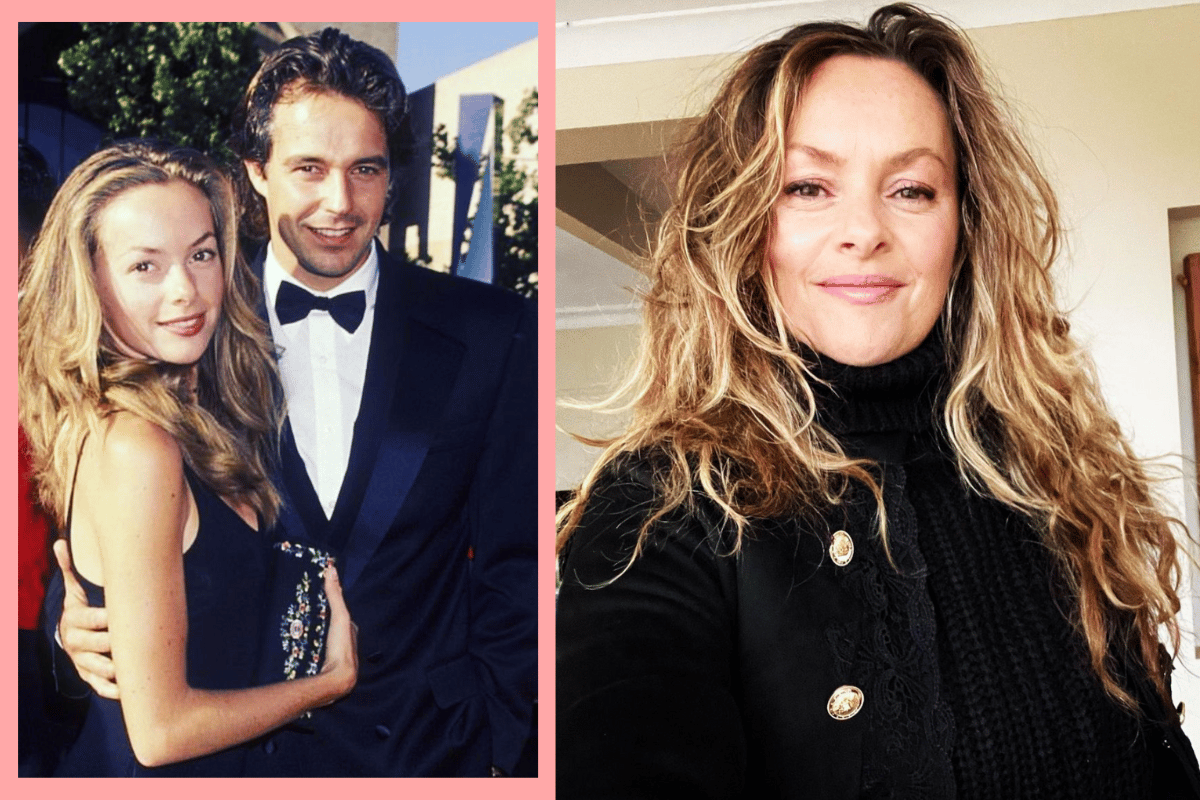 Alison 'Ali' Daddo has felt shame twice in her life. Once as a model, and also the moment she realised she was getting older.

Both stem from a feeling so many of us have. A perception that our value - particularly as women - is steeped in how we look. It's something that Ali still grapples with, she told Mia Freedman on this week's No Filter podcast.

For Ali, her modelling created "a veneer of what people like me for" - a beautiful young woman. So when she grew older, developed a sense of self and passions separate from her appearance, she felt as though no one would listen to her or take her seriously.

"I can still feel that place, the fear in me that no one is going to care what I have to say," she said.

Watch Ali and Cameron Daddo on Studio 10. Post continues below.

Ali entered the modelling world as "a very insecure" teenager. When she was 16, she burst onto the Australian modelling scene in the 1980s. She was the quintessential 'Aussie girl' for the time, her images plastered across the covers of the country's top fashion and women's magazines such as Cleo, Dolly and Cosmopolitan.

It was rare that she wasn't on the cover of one of these publications every month, making her one of Australia's best-known covergirls.

But behind the glossy magazines and the photo shoots, Ali struggled. Because, just like most girls have been conditioned to believe, Ali felt as though her entire self-worth was tied intrinsically to her looks. And working as a model, that fear became a reality.

As Ali wrote in her new book, Queen Menopause: "Some days I'm still recovering from being a model."

"It can be a really hard road to travel, modelling," she said on No Filter.

"It's a whole other layer. I'm just so grateful I'm not a model in today's age with social media. I think that would have added five extra layers of insecurity. Even if you go into modeling with great confidence, I think it still beats you down in so many ways. I know the Australian modelling industry was much kinder and gentler than the American industry - that was a nightmare, just awful," she said.

The Only Five Products You Need On Holiday

Looking back on the experience, Ali said she wouldn't recommend modelling as a job for young girls now, but rather as a hobby.

"Make sure she's got her self-worth in a good place before she even thinks about it. [As a mum], be there for the castings, talk to her about it and what she's going through emotionally. The rejection 'because you're not pretty enough [or skinnier enough]', that's the worst thing a teenage girl can hear."

When Ali and her husband Cameron Daddo moved to the US for Cameron's career, Ali let go of the modelling - and she never regretted it.

"The moment that I went to my modelling agency in LA for the last time - the freedom I felt was so amazing. I realised I don't have to look like anything other than myself. I would drive by Santa Monica and watch the modelling shoots on the beach and never did I miss it, never did I want to be down there. I just thought 'you poor girl'," Ali said.

When Ali turned away from modelling, fell pregnant and became a mum, that was the first time she felt 'the gaze' move away from her.

"At that stage it was a relief. I had a lot of lovely things happen, but again I had a deep insecurity in me when I would get gangs of girls following me down the street calling me names and saying 'you think you're hot sh*t, you're not that pretty'. That was destructive for me," she said.

For the next chapter of her life, Ali began a career teaching and looking after kids. It was the perfect pivot she needed - a job where her looks didn't matter and the kids didn't care what she looked like - as long as they were fed, taught and treated well.

"It was the antithesis of modelling. I'm just Ali - they don't care if I've been on the cover of a magazine or who I'm married to? Motherhood and teaching were great saviours for me."

Then came perimenopause. At 45, it hit like a tonne of bricks for Ali. She had just moved back to Australia with Cameron and her kids for work, and like many women, this phase of life was challenging.

Because it was at this moment that the male gaze moved from herself to her daughters.

"I did not feel jealous at all, I felt protective. Particularly when I saw 50-year-old men looking at her [one of my daughter's] when she was 16, and very openly too. I just wanted to wrap her in a blanket and put her under my arm. I didn't feel quite ready for it in a lot of ways. My daughters, they're gorgeous girls, and as a young girl that's hard to prepare yourself for the cat-calling and those looks," Ali reflected on No Filter.

During this time, Ali said some of those feelings of insecurity resurfaced.

It's something she didn't know how to address without conversations of pretty privilege being brought up, which is valid too. But it's something she knew would at least make some women feel less alone.

"I was worried. Is someone going to say 'what does she know about menopause? She's a model, she has all those privileges," she said. "The fact that at 52 I'm still seeing 24-year-old models promote ageing products and stuff for older women - I was that girl. Now I'm on the flip side of it, I'm shouting 'can we get the 50-year-old models modelling stuff for us and showing us the beauty of ageing!"

As she so perfectly put it: "It's not a disease to grow old, it's actually a f**king privilege."

Queen Menopause: Finding your Majesty in the Mayhem by Ali Daddo is published by Allen & Unwin and is available now.

Listen to the bonus episode of No Filter where Ali Daddo shares an extract from her new book. Exclusive to Mamamia subscribers, listen here.