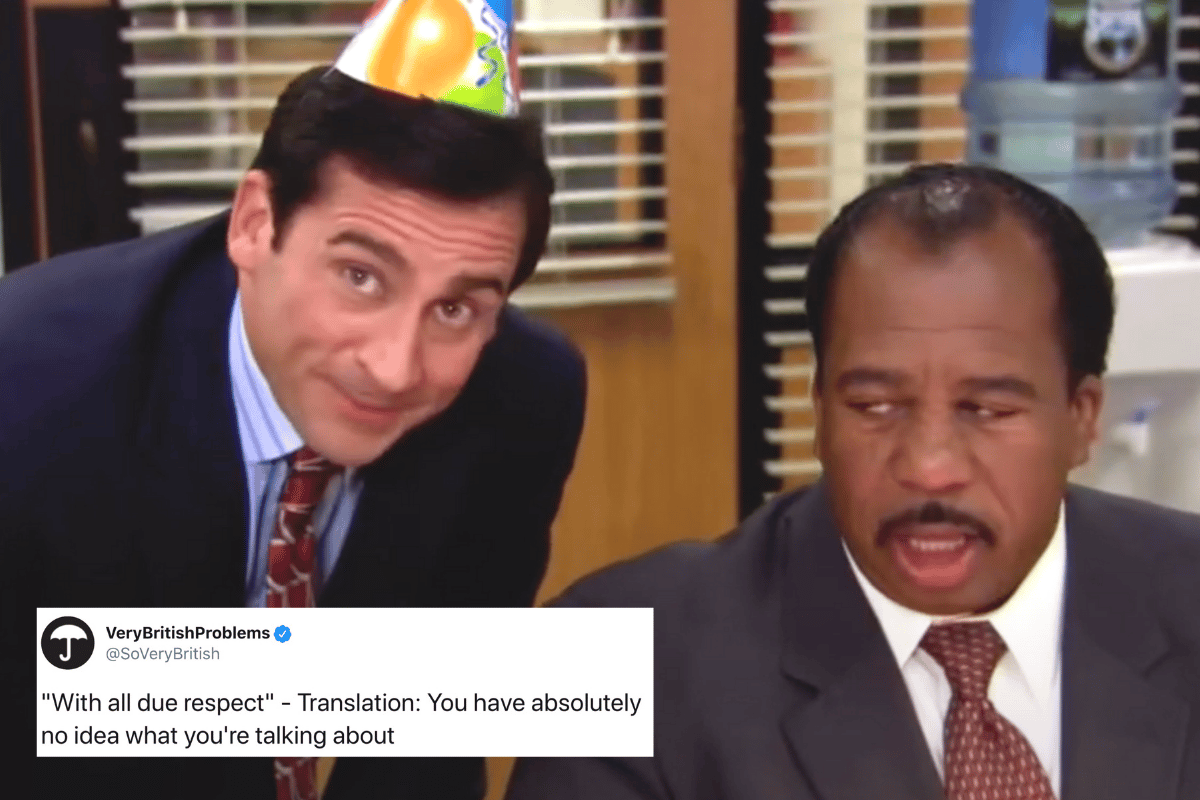 Now that we are back in the office after being in lockdown, many have completely forgotten how to have a conversation with colleagues or just generally behave like a stand-up human.

And we need some help. Big time.

To get back into the swing of things (i.e. what the hell is office etiquette?) we asked 32 women to share some of the most irritating and super passive-aggressive things people should stop saying at work.

Whether it’s serious, funny or completely f***ed: we have you covered.

“When colleagues comment on how many toilet breaks I take. Awkward…”

“When people say your name incorrectly or misspell it. Especially when emailing, as your name is clearly in the email handle so there’s no excuse.”

“Omg I hate it when people say or sign off their emails with ‘much appreciated.’ So passive-aggressive.”

“I love when people say: ‘you look so nice today!’ Like, as if I don’t look nice every day.”

“When people open with: ‘I’m confused’.”

“When people say: ‘let's flesh it out.’ Is there a more disgusting turn of phrase? I think not.”

“Can I leave this with you?”

“I’ve got a really annoying favour to ask.”

“Can I just grab you for two minutes? (And then a two-hour conversation follows)."

“You know what is so triggering: ‘can I see you in my office.’ I hate it.”

“A super annoying thing that most of the people in my office do, including me, is when we see each other we have a really high-pitched drawn-out: HIIIIIIIEEEEE.”

“I know you already know this, but…”

“It goes without saying, but…”

“I can’t stand the constant follow-up from people trying to sell me something. For example, ‘I haven’t heard back from my recent email…’ (which you literally just sent me one day ago).”

“I reaallly hate it when people tell me to ‘have a good one.’ A good what? Day? Afternoon? Meal? Just say that word, it’s one more word!”

“I feel like at work I’m always trying not to overstep with my unpopular opinions so I stick with, ‘bye, have a good one!’ as opposed to ‘bye, don’t forget that there is no ethical consumption under capitalism’."

“This example isn’t so much passive-aggressive, but downright sarcasm and rude to boot. I received an email via a buyer saying: ‘use your people skills to sell your product elsewhere’.”

On this episode of Mamamia Out Loud, Mia Freedman, Holly Wainwright and Jessie Stephens discuss how to fake being smart at work. Post continues after audio.

“When people look at their watch (or sometimes their wrist pretending there’s a watch there) as you come back from lunch.”

"My pet peeve is when people can’t get a simple ‘please and thank you’ right. Manners make me happy."

“When you’re in a meeting or a discussion with someone and they answer their phone. So bloody rude!”

“The stupid notes left in the kitchen area like: ‘unfortunately we don’t have a kitchen fairy.’ Blah, blah, blah…"

“I’m guilty of saying: ‘I have attached again for your ease of reference’, when what I really want to say is ‘here it is again you lazy MF’.”

“Years ago, I had a Team Leader who used to reply ‘it is what it is’ whenever someone in the team had a question or concern. She said it so much.”

Let us know in the comments what you think are the most annoying things people should stop saying at work.

Like a $50 gift voucher for your thoughts? Take our survey now.

Reply
Upvote
3 upvotes
The comment about not liking “we don’t have a kitchen fairy” notices….. obviously you’re one of the people that causes these notices in the first place
M
mamamia-user-405278599 8 months ago

Reply
Upvote
I'm confused as to why people should say 'I'm confused'.

Reply
Upvote
2 upvotes
@mamamia-user-405278599 It might, in this context, be a softer lead-in to saying I think that you're wrong, or I think that you f-ed up.
S
snorks 8 months ago