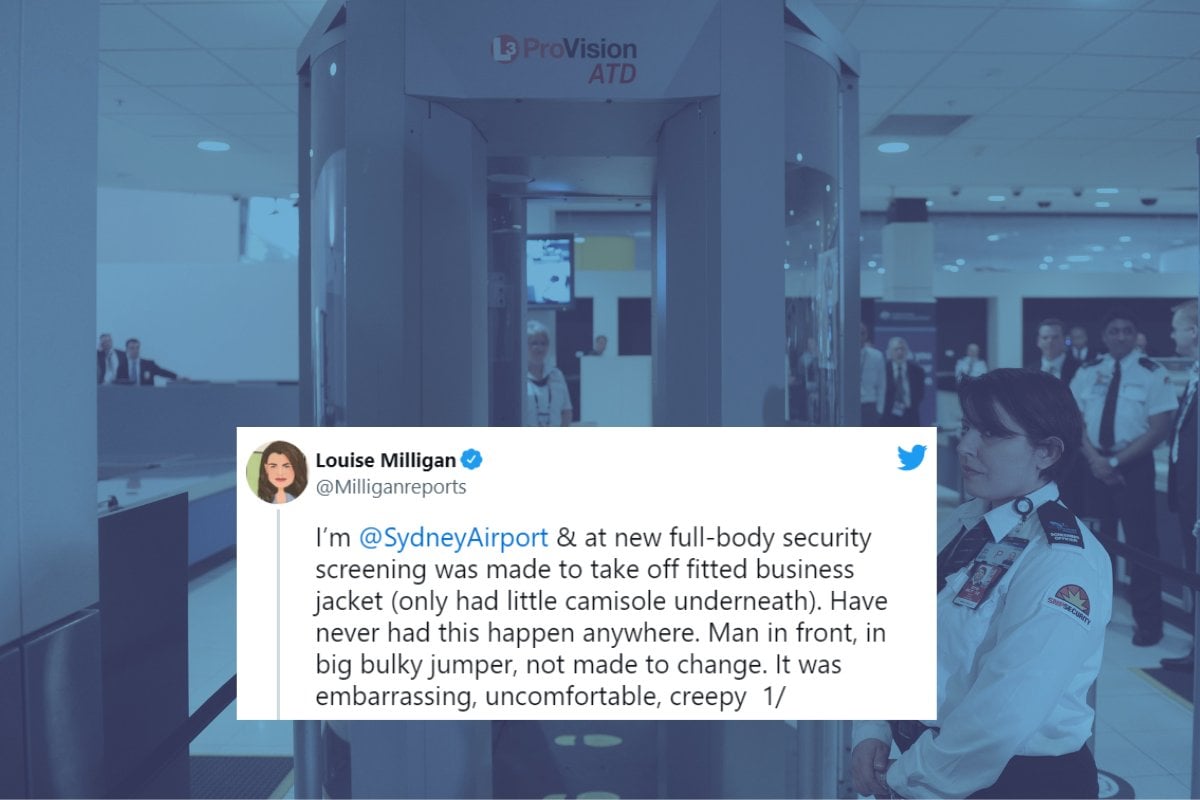 When journalist Louise Milligan travelled through security at Sydney's airport this month, she was left feeling "humiliated" and "uncomfortable".

She credits her discomfort to new and improved technology being used to screen passengers arriving for their flights.

It requires you to stand inside with your arms out to your sides for about 1.5 seconds. If it detects something, a security person will ask to pat you down.

Milligan was asked to remove her jacket despite only wearing a "little camisole underneath" while passing through one of the new full body scanners.

"Was made to take off fitted business jacket (only had little camisole underneath). Have never had this happen [sic]," she wrote on Twitter last week.

"Man in front, in big bulky jumper, not made to change. It was embarrassing, uncomfortable, creepy."

When Milligan questioned why only she had to remove her jacket and the man in front of her did not, the all-male security staff ignored her and simply "stared ahead like drones".

I’m @SydneyAirport & at new full-body security screening was made to take off fitted business jacket (only had little camisole underneath). Have never had this happen anywhere. Man in front, in big bulky jumper, not made to change. It was embarrassing, uncomfortable, creepy 1/

Milligan said she mentioned the incident to Qantas staff, who told her she's one of multiple women who have complained about the security measure.

"They were incensed and said they have had multiple women complaining of similar security heavy-handedness this week.

"They said a woman was crying after being forced to remove her t-shirt. They’ve complained to airport managers."

The new 3D scanners have only just been installed in Sydney Airport's Qantas domestic terminal this month, SBS reports. But they've been used at the international terminal in Sydney for many years, with plans for the technology to be rolled out across all Australian airports in the future.

Sydney Airport later apologised to Milligan, saying they would follow up her claims.

Louise, we are really sorry this happened and are urgently following it up with our security contractor. Thank you for bringing it to our attention. If you have further details, please send us a DM.

In a post on Twitter, Wilkinson said she was travelling through Brisbane and Adelaide airports, when a scan was triggered by the under wire in her bra and zip in her jeans.

"I had to have a full pat-down in both areas. Embarrassing, uncomfortable, inappropriate and should be fixed."

These new full-body scan machines are a real issue @Milliganreports. At @BrisbaneAirport & @AdelaideAirport the scan showed up the underwire in my bra & zip on my jeans & I had to have a full pat-down in both areas. Embarrassing, uncomfortable, inappropriate & should be fixed. https://t.co/sw1niYp5ud

Wilkinson and Milligan aren't the only women who have shined a light on the "humiliating" full body scans in recent weeks.

In a post on Twitter, transgender woman Jade Darko shared she had to be "patted down" after the body scanner at Melbourne's Tullamarine Airport picked up her "downstairs as an anomaly".

There’s a body scanner at Tullamarine

I was asked if I’d want to walk through flagged as male; to need a different pat down

This is so humiliating

All for security theatre that doesn’t even protect anyone

Darko said she was then asked to walk through the body scanner again, this time "flagged as male; to need a different pat down".

"This is so humiliating," she said.

"All for security theatre that doesn’t even protect anyone".

Have you had an uncomfortable experience with the full-body scanners? Let us know in the comments below.

Reply
Upvote
I have had a mastectomy, every time I go through one of these scanners I am pat down. Explaining mastectomy to staff makes no difference.  Horrible, embarrassing, triggering.
H
hopey 5 days ago

Reply
Upvote
2 upvotes
I was wearing jeans that buttoned up with three buttons and it triggered an alarm at my waist. I showed them the buttons on my jeans and then they asked me to unbutton them! I told them no, and it was unnecessary for me to unbutton my clothing in front of them and all the other travellers. I moved forward, collected my items coming out of the X-ray and left. No one stopped me.
News
General
Opinion
True Crime
Politics
Sport
Explainer
Entertainment
Celebrity
Reality TV
Movies
TV
Books
Rogue
Royal
Lifestyle
Beauty
Fashion
Weddings
Home
Wellness
Health
Fitness
Travel
Food
Family
Before The Bump
Pregnancy
Baby
Kids
Teens
School
Parent Opinion
Work & Money
Money
Finance
Career
Lady Startup
Relationships
Sex
Dating
Separation
Friendship
Family
Real Life
Couples