Driver who killed four children in Sydney has sentence cut.

A drunk and drugged driver who killed four children walking along a Sydney footpath to buy ice-creams has had his jail term cut by eight years.

Samuel William Davidson was speeding when his ute mounted a kerb at Oatlands in Sydney's northwest, and struck Veronique Sakr, 11, and her cousins, Sienna Abdallah, eight, and her siblings Angelina, 12, and Antony, 13, on February 1, 2020.

But today, in a majority decision, the NSW Court of Criminal Appeal concluded the term was manifestly excessive. 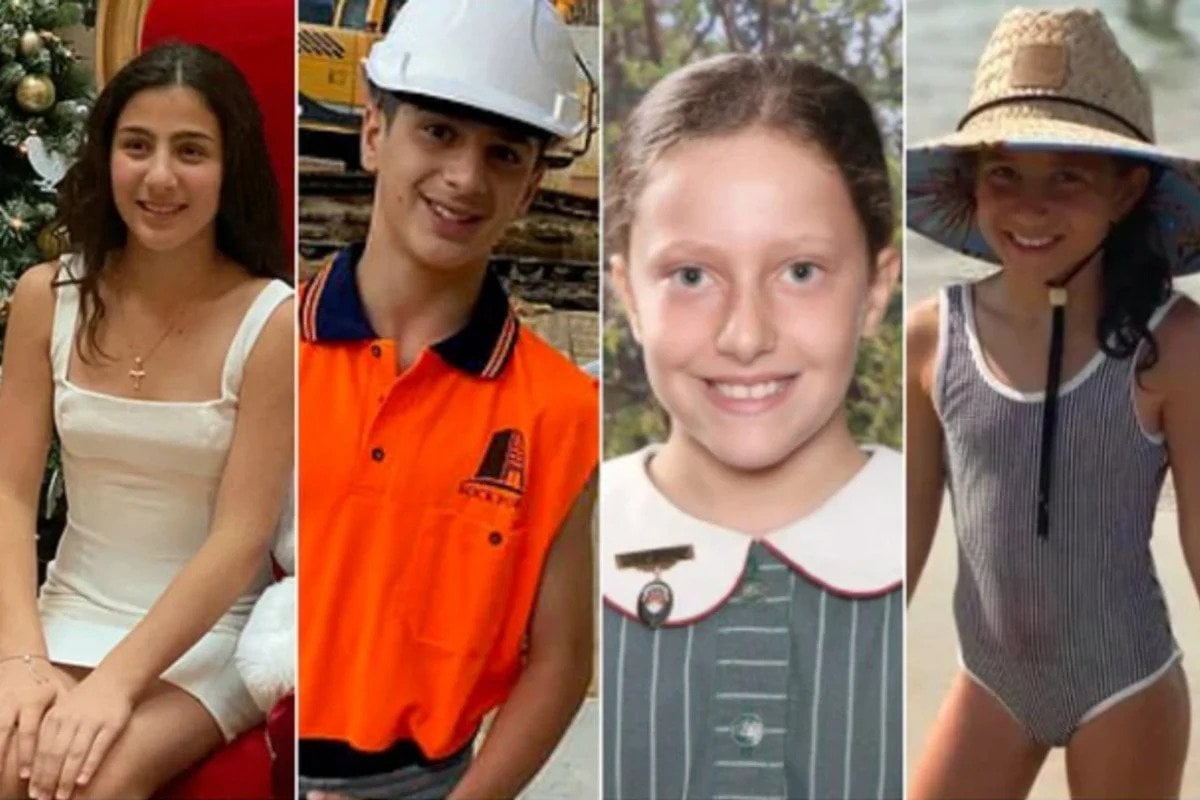 Image: Facebook.Davidson was re-sentenced to a term of 20 years with a non-parole period of 15 years.

The professional truck driver pleaded guilty to four counts of manslaughter and to charges related to the injuries caused to three other children.

The sentencing judge said Davidson's menacing, dangerous and aggressive driving showed all responsibility to the road safety of others was abandoned.

Justice Christine Adamson dissented from the conclusion of Justices Paul Brereton and Natalie Adams who found the "aggregate" term - which is imposed instead of separate terms for each offence - was manifestly excessive.

"The sentencing judge was faced with a difficult task in sentencing the applicant for the highest number of manslaughter charges arising from the one act of criminal negligence in NSW to date," Justice Adams said.

"The real question raised by this appeal is how the fact of the multiple deaths is to be punished in circumstances where the same act in driving caused four deaths," she said.

"His one act of criminally negligent driving had catastrophic consequences."

In presentencing, she said Davidson was a man of prior good character, had genuine remorse, little risk of re-offending and had suffered the long-term impact of ADHD.

Danny Abdullah, father of three of the children who were killed, wrote a letter saying no sentence imposed would ever be enough for the loss the families have suffered.

"But this Court is required to reconcile their grief with the application of the relevant sentencing principles and, by way of instinctive synthesis, arrive at the appropriate aggregate sentence to punish the applicant," the judge said.

Abdallah and his wife Leila Abdallah have previously said they had forgiven the driver.

PM and leaders meet over COVID-19, and all the news you need to know this morning.

You may have heard people talking about Netflix's disturbing true-crime documentary Girl In The Picture.

Yesterday my colleague, Isabella Ross, shared the horrific story behind the documentary, which you can read here.

These are the top news stories you need to know today, Friday July 15.

Prime Minister Anthony Albanese will meet with state and territory leaders in response to rising COVID-19 cases across the country.

The emergency national cabinet meeting is expected to be held on Monday following pressure from state and territory leaders for a briefing on the latest medical advice.

Leaders could also challenge the prime minister on a decision to end pandemic leave payments and the concessional free rapid test program in the midst of the case surge.

The Prime Minister has called an emergency national cabinet meeting, as #COVID19 causes chaos in our health system. @ChristineAhern #9News

Yesterday, Queensland Premier Annastacia Palaszczuk said she was keen to discuss the pressure on the health care system from rising cases and hospitalisations with her counterparts.

She also said leaders need to discuss how people taking time off work while sick with new virus sub-variants could be supported.

"We are seeing some people being hit harder, so that means that they are off work for longer than the seven days (of isolation)," Palaszczuk told Seven yesterday. "I do think we need to look at those particular examples."

Australia recorded more than 47,000 cases and 78 deaths yesterday, with 4512 people in hospital.

"I am very saddened to inform all of those that loved her, of which there are many, that Ivana Trump has passed away at her home in New York City," Donald Trump said in a post on the social medial platform Truth Social.

The couple married in 1977 and divorced in 1992. They share three children together: Donald Jr, Ivanka and Eric.

"Ivana Trump was a survivor. She fled from communism and embraced this country. She taught her children about grit and toughness, compassion and determination," the Trump family said in a statement quoted by ABC News.

She grew up under Communist rule in the former Czechoslovakia.

Neither the Trump family statement nor the post from the former president mentioned the cause of her death.

Actor Kevin Spacey has pleaded not guilty to charges of sexually assaulting three men a decade or more ago, and was told he would face trial next year.

The 62-year-old replied "not guilty" to each of the five charges during a hearing at London's Central Criminal Court, commonly known as the Old Bailey.

Judge Mark Wall set a date of June 6, 2023, for the trial to start and said it would last three to four weeks. It is likely to be at the Old Bailey, the venue for Britain's highest-profile criminal trials.

Kevin Spacey pleaded not guilty to charges of sexual assault on Thursday in a London courthouse. The Oscar-winning actor is set to face trial in Britain in 2023. https://t.co/p01q52g6vl

The former House of Cards star, who ran London's Old Vic theatre between 2004 and 2015, denied four counts of sexual assault and one count of causing a person to engage in penetrative sexual activity without consent.

The incidents allegedly took place in London between March 2005 and August 2008, and one in western England in April 2013. The victims are now in their 30s and 40s. Spacey's lawyer previously said the actor "strenuously denies" the allegations.

Spacey, who faces a separate civil sex-assault lawsuit in the US federal court, was granted bail and allowed to return to the United States after a preliminary hearing last month. The judge continued the actor's unconditional bail on Thursday, and said another pretrial hearing would be held early in 2023.

Australia and more than 40 other countries have agreed to coordinate investigations into suspected war crimes in Ukraine, shortly after Ukraine claimed a Russian missile strike killed civilians far from front lines.

Ukrainian President Volodymyr Zelenskiy told the international conference that Russian missiles had struck two community centres in the west of Ukraine, killing 20 people, including three children, and wounding many more.

Russia has repeatedly denied involvement in war crimes and deliberately targeting civilians since it invaded Ukraine in February.

Yesterday, 45 countries at the conference in The Hague - headquarters of the International Criminal Court (ICC) - signed a political declaration to work together on investigations into war crimes in Ukraine. Those countries included European Union members as well as the United Kingdom, the United States.

Steps they will take include creating an umbrella group to avoid duplicating investigations, training Ukrainian prosecutors and expanding the number of forensic teams operating in Ukraine. They also pledged 20 million euros ($A30 million) to assist the ICC as well as the prosecutor general's office in Ukraine and United Nations support efforts.

The unemployment rate plummeted to 3.5 per cent in June, the lowest rate in 48 years, as Australia's great jobs boom continued.

The drop, from 3.9 per cent in May, was much better than economists were expecting, and Deutsche Bank economist Phil O'Donaghoe said it was one of the best labour market reports in Australian history.

"You can never get too carried away with any number, whether it's positive or negative, but really it is just an extraordinary strong print, really adding to a very, very robust demand story here in Australia," he told ausbiz television.

#Breaking Australia's unemployment rate has dropped to 3.5% for June, the lowest rate in 48 years.

According to the Australian Bureau of Statistics, figures have not been this low since August 1974, when the rate sat at 2.7%. #auspol #ausbiz pic.twitter.com/f7cZ3HevqF

Australian Bureau of Statistics head of labour data Bjorn Jarvis said the June figure was the lowest unemployment rate since August 1974, when the rate was 2.7 per cent and the survey was quarterly.

CommSec senior economist Ryan Felsman called the figure a "staggering low" and a sign of an incredibly tight labour market.

Economists said the low unemployment rate would increase pressure on the Reserve Bank to aggressively hike interest rates given the RBA didn't anticipate unemployment falling to about 3.5 per cent until June 2023.

You're all up to speed.

How to save money on your power bill.

On top of rising fuel costs, and increased cost-of-living, power bills are also on the rise.

But what can you do? Are there really ways to combat the price hike in your own home?

The Quicky speaks to an energy saving expert, and a savvy homeowner to discuss some practical tips that you can implement today to save you money.