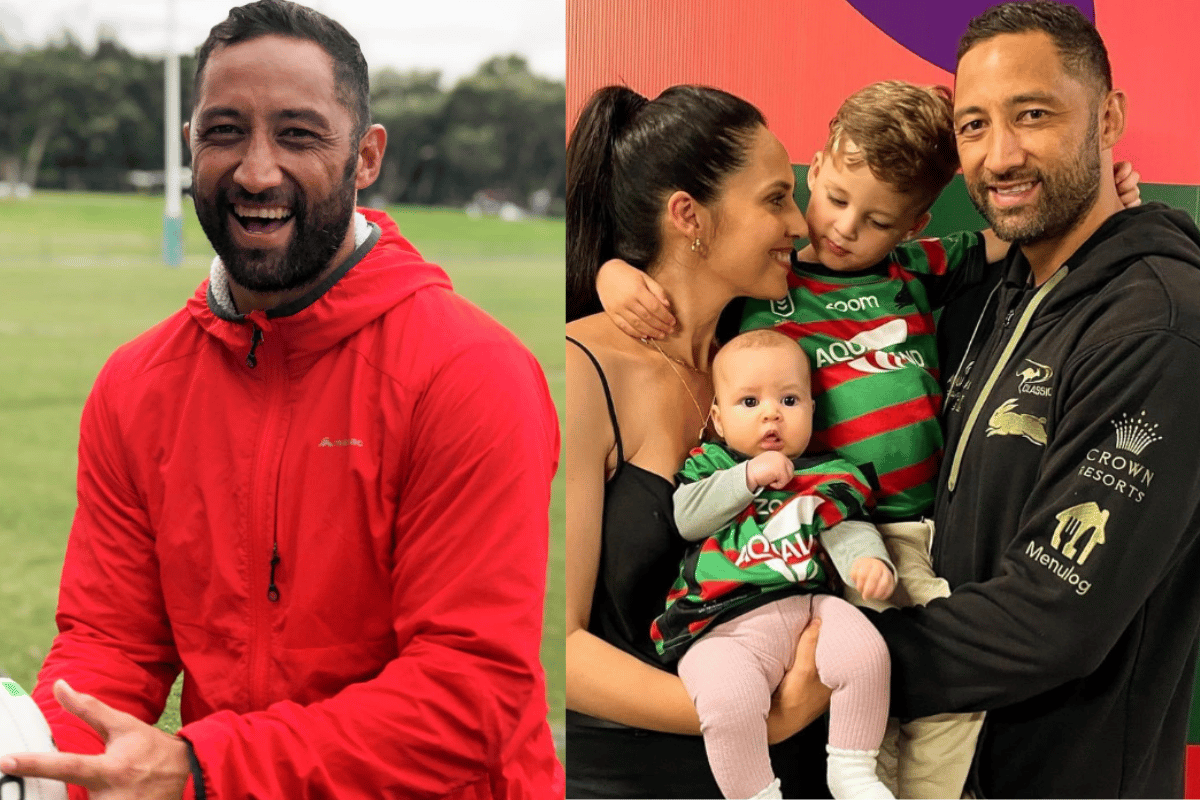 Benji Marshall is considered a great in the eyes of many rugby league fans. And for good reason.

Given the sheer amount of headlines we see on a semi-daily basis of footy players behaving badly, it's refreshing to have giants in the game who break the mould.

But it was the semi-final episode where Benji won over even more fans - and it was all to do with his decision to open up and share his personal story.

In the second-last challenge, the celebrities were tasked with coming up with a tv or movie idea and pitching it to Stan execs. And Benji pitched the story 'Who is Benji Marshall?'

In a piece to camera just for presenting his idea, he said: "I've got to go stand on a stage and present. It's pretty daunting. When it comes to my personal life, I don't really share a lot of information. But I've done a lot of things in my life that I would never do because of the word 'charity'. That's what it's about."

It's a story he rarely tells publicly, and one he was nervous to share.

"I've never talked about it, because it meant so much to me," he said. "The Benji Marshall everyone sees the Benji Marshall they think they know: 300 games in the NRL, all these big moves, flick passes you name it. But that's not the real me. You know how I know that? Because I don't even know the real me."

Benji went on to say that the reason he has struggled with his identity is because he doesn't know who is dad is. That half of him is "missing".

Benji grew up in a small town in New Zealand called Whakatane. His mum gave birth to him when she was 15. They weren't a rich family by any means, and like many of the kids from the area from humble beginnings, there weren't a lot of opportunities and pathways available to Benji.

The Sex Scene Conversation We Shouldn't Be Having

Listen to No Filter: When Andrew met Anne - a son's story. Post continues after audio.

Growing up and going to school, Benji said he experienced bullying and taunts from some of the kids around him. They would chant things like 'haaa you don't know your dad'. And he would sit in the playground crying.

The eldest of three brothers, Benji was offered a scholarship to play footy at a Queensland high school when he was a teenager. He made his first-grade debut in 2003 whilst studying for his school finals.

The halfback player shot to fame at the Wests Tigers club in Sydney. In 2005, he made a flick pass to Pat Richards which became known as one of the most famous grand final moments. During his lengthy career, Benji played for 19 seasons and played a total of 346 games. On the October 6, 2021, he officially announced his retirement from professional rugby league, finishing his career with the South Sydney Rabbitohs.

And throughout all the triumphs and football success, Benji sometimes felt like something was missing.

"The thing that stood out to me the most though was when I asked my mum who my dad was - I'll never forget the look on her face," he shared on Celebrity Apprentice. "It was the look of fear, worry, scared. It actually made me scared. And I never ever asked her again," he said, choking up. "I still don't know to this day."

Speaking to Nova's Fitzy and Wippa this week, Benji said that one of the only other times he had spoken about not knowing his biological dad was in 2002.

“After I made my debut [at the age of 17], I did this documentary thing in New Zealand and said I'd never met my dad. I had ten emails from people saying they were my dad," he shared.

He also confirmed on radio that he isn't keen on knowing who his biological dad is after all these years without him.

"I don't want to know my dad. I'm one of those people, though that like if there's like toxic people in my life, I can just cut them off and that's it. I'm not really dealing with you again. But I do have this want to know like, what am I? Am I like, English? Am I, I don't know. Like what half-nationality wise."

But as Benji said, he's created a village around him for support. In 2013 he married his wife Zoe Marshall, a media personality and podcaster.

In 2017 they welcomed their first child, son Fox Marshall. In 2021, they had daughter, Ever J Marshall.

At the end of last year, Zoe and Benji had completely different schedules because of their kids sleeping schedules. As Zoe said to Mamamia, connecting and spending quality time together as a couple was key.

"I think it was only two days ago, we sat on a couch together for the first time in about six weeks. And I was like, 'It's so nice to hang out with you. How are you doing?' Rather than like schedule, schedule, schedule. There's so much logistical s**t that goes on in marriage, that it's just nice to see each other, look at each other, be touched on the back or touched on the leg," she said.

"It seems so simple but I think when you're in this season of motherhood, those things really mean a lot."

Nowadays, Benji has finished up his NRL career. And he said that going on Celebrity Apprentice was the perfect timing for him, as it gave him a sense of purpose. It's an experience of rediscovering their identity that so many athletes go through.

As Zoe wrote on Instagram at the time of Benji's retirement, football has been his entire world for so long.

"I see the mood shift before the game. I've learnt that there are certain days that he can't handle heavy discussions or problems. I get to hear the elation after a great game. I also hear the disappointment in mistakes that were made.
I get to see how grown men stare at him. How they idolise this man that I get to see in very mundane situations every day. They see a superstar. A hero," she noted.

"I get to see him limping home with bags of ice - staying up for hours treating injuries in the middle of the night. Or rushing to an urgent scan the day after a game anxiously awaiting the results. I get to sit with him while he has no club, no offers, no options in sight. I hold his hand, his head, his hurt. He loves this game."

Overall on Celebrity Apprentice, Benji raised a whopping $487,105 for his chosen charity South Cares, which supports disadvantaged and marginalised youth and their families.

"I didn't expect that. I honestly didn't think I'd last that long because I don't really have a lot of experience in business," Benji said to 9Entertainment.

"I think it's opened up my eyes to if I want to do something involving business, then I can do it. I've got enough tools to be able to do it and enough people like Janine [Allis] and Nick [Bell] from the show to lean on if I need advice."

Reflecting on sharing his personal story, Benji wrote on Instagram: "I am super proud to be able to stand on the stage and share my story and pitch to everyone. I shared things I have never spoken about before and I am proud to share my emotions and true feelings publicly. Vulnerability is a strength."