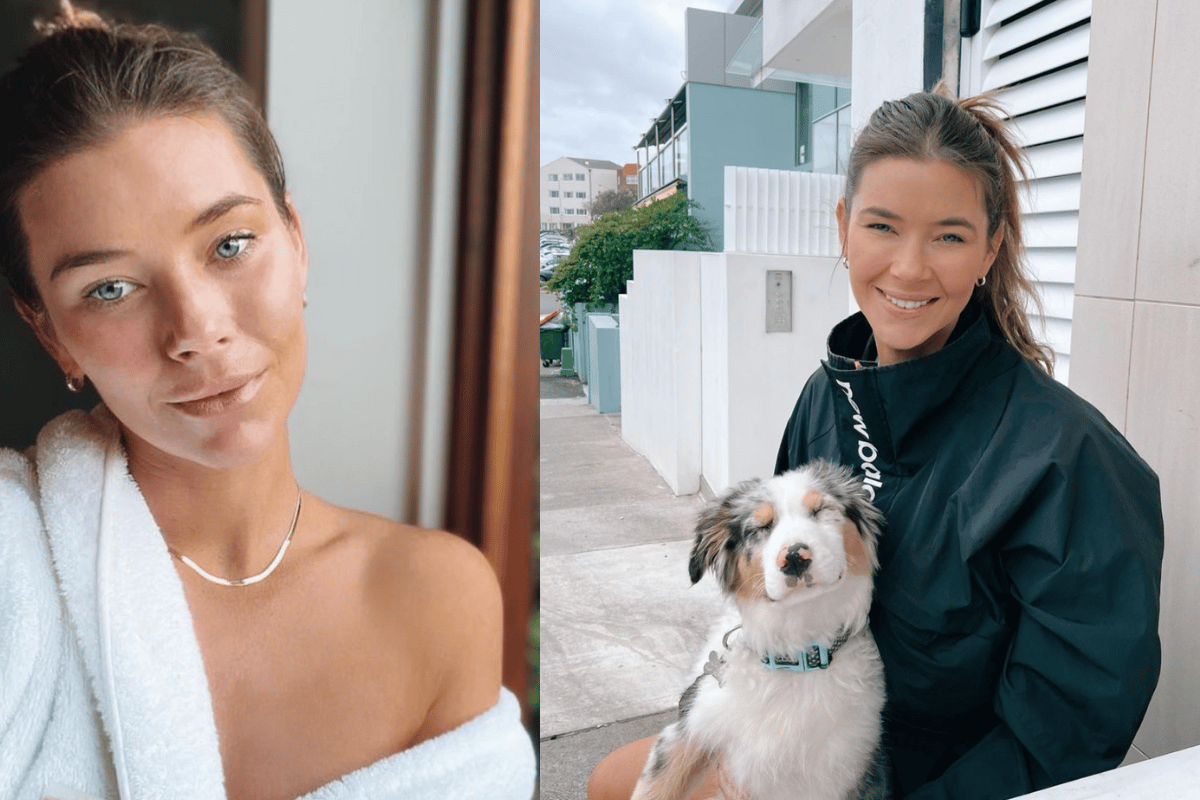 Former reality TV star and podcast host Brittany Hockley has often used her platform to talk about issues that are close to her.

She has been open and honest about her love life. The public first got to know her on Nick Cummins' season of The Bachelor, where Cummins decided he did not wish to pursue a relationship with either of the two women at the end.

She and Life Uncut co-host Laura Byrne have since spoken avidly about dating and their respective love lives.

This week, Hockley and Byrne spoke with Will and Woody on their radio show's #ShareMyFood segment.

In it, Hockley opened up about what she has been feeling vulnerable about, in the hopes to make others feel less alone. And that's exactly what she did.

"If I had to pinpoint what I've been having the most trouble with, it would probably be that I feel very unloveable. I can already feel myself getting upset. I feel like something must be wrong with me and that I'm the common denominator, because I've had ten years of horrific things happening to me, some very public and some very private," she shared.

"I'm a bit like - when's my turn? What's wrong with me? Why is everyone else getting their happy ending?"

For two years, Hockley was unknowingly dating a 'sociopath', who not only had another girlfriend and hid a whole other life from her, but slept with 13 other women during their time together.

"He love bombed me," Hockley explained to Mamamia back in 2019.

The pair met at work, and within three and a half weeks, he was telling her he loved her. It was an intense relationship from the get-go, with 70 to 80 messages flying between them a day, all by different mediums.

But amongst the big romantic gestures were the downsides, negatives that Hockley would let slide.

"The age old saying 'love is blind' really did ring true to me. You believe what you want to believe and ignore the rest. I had so many signs that alone weren't red flags but when you put them all together it's like shoving a big loud alarm on their forehead," she told Mamamia.

"But he was convincing, charming, manipulative, intelligent and handsome all rolled into one. A formidable combination indeed."

After two years with the man she thought she would marry, Hockley found out casually over dinner with a mutual friend that he wasn't who she thought he was.

The other girlfriend also had no idea of how manipulative her shared partner was, and when Hockley and the woman connected, they realised how conniving he had been to both of them. They had shared plans to call their kids the same names, looking to buy the same house, and both women wore the same perfume.

Healing from that experience took time. Hockley said she started to suffer from insomnia and anxiety and was dealing with feelings of embarrassment and anger after she uncovered the truth.

"Going through something like that made me the person I am today, led me to all the experiences I've had and I know it is putting me on the trajectory I am supposed to be on," she said.

After years of dating on and off and travelling the world, Hockley then decided to give The Bachelor a go – the season premiering in 2018.

Nick Cummins "The Honey Badger" was regarded as one of the most contentious of Bachelors, becoming the first Bachelor in Australia's history to not choose a winner. He left audiences rattled and confused when he flew his final two – Brittany Hockley and Sophie Tieman – over to New Caledonia, before dumping them both.

"Right now, I can't give 100 per cent to you. My head is very clouded. Right now, I'm a little bit lost," he told Brittany at the floral altar, soon delivering a similar message to Sophie.

Hockley said it was an experience that brought up a lot of those emotions from the 'double-life partner' ordeal.

"He [Cummins] wasn't the greatest to me afterwards. I think he blamed me a lot for the hate he got from Australia. I don’t think he was expecting Australia to hate him so much," she said on the Happy Hour podcast.

"When it happened, the production went into meltdown," she explained. "You could see it on people's faces. The way they were acting, it was very obvious that most of them were shocked at what just happened. There's a huge chance he went in there knowing he was just gonna f**k around with 30 girls, get half a mil."

As for life after The Bachelor, Hockley went on to appear on Bachelor In Paradise 2020, coupling up with sweetheart-turned-problematic contestant Timm Hanly. However, things between the pair soon wrapped up after filming.

Then in late 2020 to late 2021, Hockley went on to have a relationship with Australian tennis player boyfriend Jordan Thompson.

Unfortunately the relationship came to an end, with Hockley elaborating on her Life Uncut podcast.

Reflecting on her dating life with Will and Woody, Hockley said it's been a tough year for her but that she's got a lot of support from loved ones.

"I feel like I can't find love or feel loved. I constantly feel like 'oh here it is again I'm not enough again, I'm heartbroken again'. I had what I thought was probably the one, love," she said.

"There's this idea that okay this much time has gone past now, and everything should be okay, you should be back on track... healing isn't linear and sometimes it takes longer for other people, and you have to work through other things."

Hockley said her self-confidence and mental health has been affected by these experiences, saying: "I feel like no one wants to know me".

As Will and Woody said, the immediate reaction someone listening to Hockley's feelings is to say 'you're amazing' or 'you're perfect, you'll find someone'. And although there's nothing wrong with that response, it doesn't make the person's feelings go away. That takes time.

"You can have amazing things in your life and amazing people, and that doesn't take away from the fact you're still feeling those things. Even though I wanted to find that and have that relationship, I am proud of myself that I won't just settle with somebody for the sake of it. I'm still willing to wait for the right time and the right person."

Reply
Upvote
Yeah… 37 here, I’ve been single basically my whole adult life. I couldn’t find the “right guy”, then realised at the grand old age of 27 that I was not attracted to them, just forcing something that wasn’t there. That certainly narrowed the pool 😅
I feel like I’ll be forever single, but I haven’t let it stop me from doing what I want in life. Including the baby! Onwards and upwards ladies ♥️
N
nat77 16 days ago