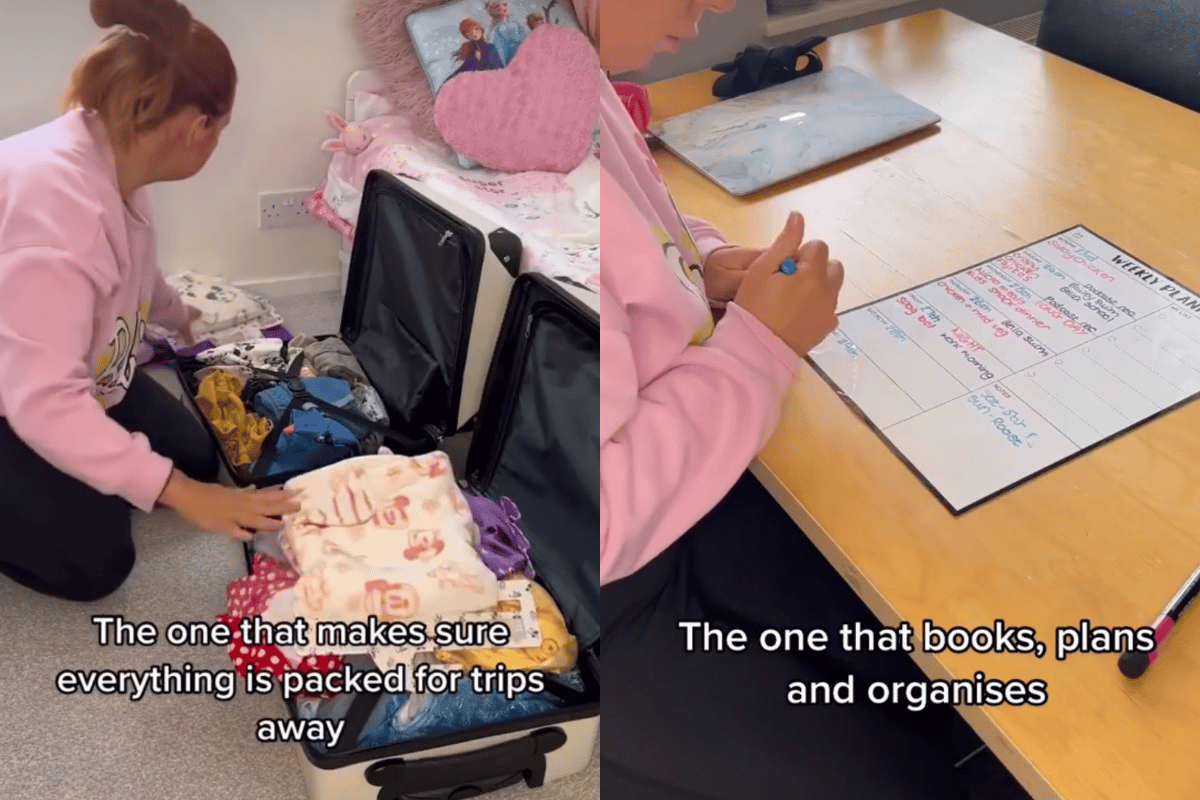 If these sound like parenting tasks on your never-ending to-do list, then you are 'the default parent'.

A recent viral post shared by Mamamia about the demands of being the default parent made many women, like Suzanna*, a mum-of-two from Sydney, feel seen.

Suzanna works part-time 30 hours per week across five days, while her kids are at school.

"My husband is the main breadwinner, so he usually leaves the house by 7.30am and doesn't get home until 7pm," she tells Mamamia.

"He often works weekends too, so I am the 'default' parent and always have been."

On top of her paid job, Suzanna gets the kids up and where they need to be at the start and end of each day.

"My day starts by getting the kids up and ready for school, emptying the dishwasher, putting on a load of washing, making their breakfast, packing their lunches and driving them to school while my husband gets himself ready and leaves the house.

"Then I do it all again in the afternoon. I pick them up from school, feed them afternoon tea, drive them to after-school activities, fix them dinner, help with homework and get them ready for bed.

"My husband will often do the food shopping - which I appreciate as I hate doing it - but inevitably I have to go back the next day and get the stuff he forgot or didn't buy!"

On top of the regular weekly domestic chores, Suzanna also has the administration to get through.

"I'm the one who organises school holiday activities for the kids so that I can still do my paid work while they are on holidays. I don't even think my husband knows when the holidays are because he never has to worry about what the kids are doing because I do it all."

"I make all the kids' appointments and keep the calendar up to date with their many activities," she tells Mamamia.

"I organise the household finances, buy all the gifts for their friends' birthday parties, ensure they have socks for crazy sock day, appropriately coloured sunglasses for sports carnivals, etc. It makes me feel exhausted just thinking of all the things that need to be done."

Nicole says that while her husband does all the gardening and does wants to help more with the kids, it's the fact he has to ask how he can help that makes the role of being the default parent so challenging.

"He's a great dad and happy to help me with anything, but he still needs direction, which adds to my load."

Suzanna says that being the default parent is frustrating and exhausting, especially because they did not discuss how their roles would work when they had kids.

"It's exhausting carrying the domestic load and constantly being 'on'. No wonder I'm knackered when I fall into bed and to think my husband asks why I'm always tired?

"It's hard to complain when we can live a comfortable life thanks to his job and how hard he works, but it is frustrating when he doesn't realise that the reason he can work those long hours, is that I'm there to pick up the parenting and domestic slack.

"We never really spoke about who would carry the parenting load before we had kids, because he has always earned more than I ever could, so it made sense for him to keep doing that while I stayed at home with the kids."

Looking back, Suzanna feels she should have spoken more with husband about how to divide parenting duties more fairly.

Listen: Kelly McCarren on the realities of parenting. Post continues below.

"If I had my time again, I would probably have a discussion about how it would work once I went back to work and that it would be a huge help if he could be more involved in the day-to-day parenting.

"Not just for me, but for the kids and his relationship with them. Even if it’s picking them up from school one afternoon a week, it would make a huge difference."

Nicole feels similarly about wanting to share the role as default parent, as well as having more time for herself.

"I would absolutely be happy to share the load a bit more, but perhaps I just need to make more time for myself to balance it all out. I know if I'm organised and happy, I feel more at ease."

Ultimately, Suzanna says she wouldn't want to swap roles with her husband and that it's more about feeling recognised and respected for all the work she does.

"I would like him to be more aware of all the little things I do every day and offer to help more. But given he's at work until 7pm most days, most of the jobs are done by the time he gets home!

"It is what it is, and I’ve made peace with it. It is frustrating sometimes but I think, in the long run, I get the better end of the deal - I get to spend my time with the kids rather than slaving away in the office 12 hours a day."

For default parents who want to better balance the mental load and domestic responsibilities in their household, visit the Relationships Australia NSW website for advice about how you can start a conversation with your partner.

*While these women are known to Mamamia, names have been changed for privacy reasons.

Do you buy the groceries in your household? Take this short survey now to go in the running to win a $50 gift voucher!

Reply
Upvote
I was the main breadwinner and the default parent, which is one of the reasons I left my now ex. He was in the arts, was home most of the day, brought in no income and did the bare minimum. I did it all, now he’s gone I still do it all, but I don’t have a dead weight that I’m dragging around either. Men (many of them) need to step up and realise that running a household needs to be on the shoulders of more than their partner.
T
trudi 2 months ago