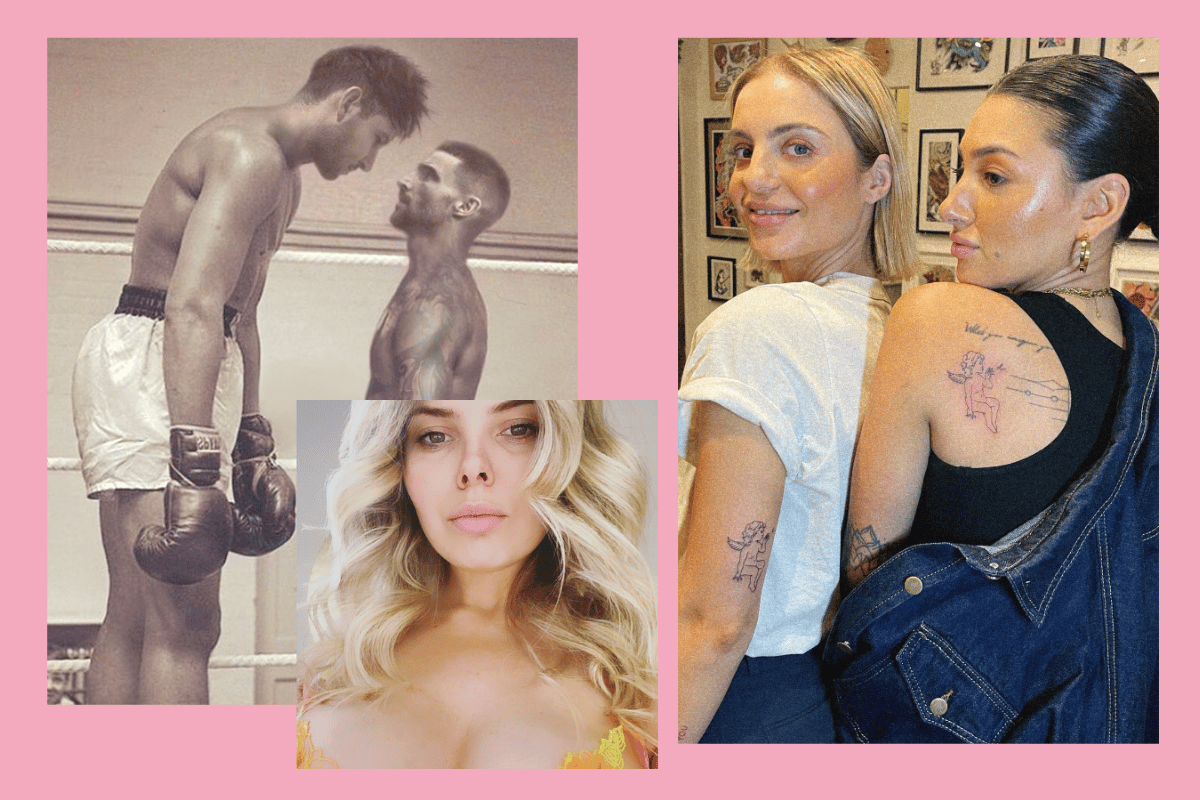 It truly feels like a lifetime since Married at First Sight aired.

There was drama, smashed wine glasses, 'leaked' OnlyFans photos, gaslighting, manipulation, couples falling in love, couples hating one another - it was a lot.

Two months on from the finale and plenty of gossip since, the lives of this year's cast look a hell of a lot different. Some are social media influencers. Others are gearing up for celebrity boxing matches. A few have turned to OnlyFans. And two have started their own podcast.

So, to get you up to speed on it all, here's everything that's happened since the finale aired.

Watch: An extended look back on the drama of Married At First Sight 2022. Post continues below.

Brent Vitiello and Daniel Holmes will be fighting it out in the boxing ring.

Who could forget the fabulous 'cheating scandal' between Daniel Holmes, Carolina Santos and Dion Giannarelli? The aftermath of it meant Daniel and Carolina were chastised by the majority of their fellow brides and grooms.

And one of the cast members who certainly isn't a fan of Daniel, is Brent Vitiello.

"I can't stand him for the person he is, top to bottom, inside and out," Brent said on the Good B*tch podcast after the show had aired.

So it's not surprising that the two men have decided to go down the reality TV redemption route and do a charity boxing match, with Daniel writing on Instagram (alongside a heavily photoshopped image) "October 15".

In an Instagram live, Brent said: "I'm going to fight Daniel. The one who was on the season with us, the one with the Bali teeth. I've heard all the stuff he's saying about me, I couldn't care less. Ask this guy how many times a day I train anyway, so I'm ready."

Two weeks ago, the tabloid press went into overdrive when it was discovered that Jackson Lonie had kissed a woman that wasn't his MAFS bride.

Jackson had been out at a venue - which by day is a senior citizens facility - in the outer suburbs of Melbourne when he was filmed getting it on with another woman.

Jackson and Olivia have since confirmed they are planning on staying together despite the scandal.

In an Instagram video, they addressed the situation with Jackson saying: "Just taking a second to jump on here to address what happened last weekend. It's s**t, I f**ked up. All the negativity we'd been getting, the way I'd kind of been dealing with it is to get blackout drunk - which don't get me wrong, isn't an excuse. It's not acceptable, It's not the person I want to be. It's not who I am. It has been s**t, but I'm lucky to have Liv by my side and she has been nothing but an angel throughout it all."

Listen to The Spill unpack this saga. Post continues after audio.

Olivia said: "We're staying together. We've got a lot of healing to do, but ultimately, we love each other and it's not worth throwing it away."

Just before they released the video, Olivia had said she was on her way the international airport, hoping to hop on a plane and escape the drama.

But as she wrote on Instagram: "I tried but tested positive for COVID at the airport. The universe said 'No girl. Go home and deal with this'."

There were suggestions that the kissing saga had been orchestrated by the pair for publicity, including a Tweet from Domenica Calarco saying: "Kris Jenner works hard, but Max Markson [Jackson and Olivia's celebrity PR agent] works harder."

The pair have denied this, with many highlighting that the saga doesn't exactly benefit their status or reputation. But perhaps using a s**tty scenario to their advantage, both Jackson and Olivia have announced a new venture...

Olivia and Jackson have started their own OnlyFans pages.

Just days before the footage of Jackson kissing the other woman went viral, Olivia joined OnlyFans.

Using Instagram to promote her new account, she posted a picture of herself in some lingerie with the caption 'Yeah, I did it'. And indeed she did, with news outlets reporting she made $10,000 in the first 12 hours of her new account.

Of course, many were a little surprised to see Olivia join OnlyFans, considering what went down between her and Domenica.

And to really create a full circle moment, Jackson himself has decided to join OnlyFans too! He promoted his new account with a couple of suggestive posts. One was a video of him dancing provocatively and wearing no shirt to the acappella tune of Rod Stewart's 'Da Ya Think I'm Sexy'.

Another was a simple post of him shirtless with a towel covering his downstairs area with his hand along with the caption, 'Link in bio' with a kissy face.

Domenica said she is experiencing PTSD as a result of her time on MAFS.

Domenica was a major part of the storyline in MAFS 2022 - her relationship with Jack, Olivia's treatment of Domenica, the wine glass smashing incident and the OnlyFans leaked images without consent scenario. Simply put, there was a lot going on for Domenica.

This week, she's opened up about the impact all of that had on her wellbeing.

She said that coming straight off the show, she would feel panicked any time she sat down with a group of people at a dinner table - reminiscent of the dinner party scenes in MAFS, fearing confrontation would occur.

And boy, were there some fiery dinner parties.

Listen to the latest episode of Mamamia's entertainment podcast, The Spill. Post continues after audio.

"Legitimately, for a while there after MAFS, sitting at any table that was like a dinner table or a table where I had to have a conversation, I'd legitimately freak out, cause I'd be like 'Who's going to start s**t, who's going to say something'," she said on her podcast Sit With Us.

She also said her therapist told her she was going through the trauma response as a result of the experience.

"I fully had PTSD. My therapist fully says I'm going through PTSD, so it's real."

And in reference to Olivia, Domenica said: "I actually get scared when I see a photo of her… It brings back PTSD of her sitting across from me."

On her Instagram stories, Domenica continued: "If Olivia had actually not blocked me and was able to actually see what I talk about on my platform, and how I use my social media, she'd be able to see that the people perpetuating these lies in her Q&As are actually wrong and just trying to keep on this hatred and keep talking s**t. It's pure bulls**t and it just needs to stop. Olivia, this goes out directly to you. If you have something to say, unblock me, come and talk to me. Come and say it to my face!'"