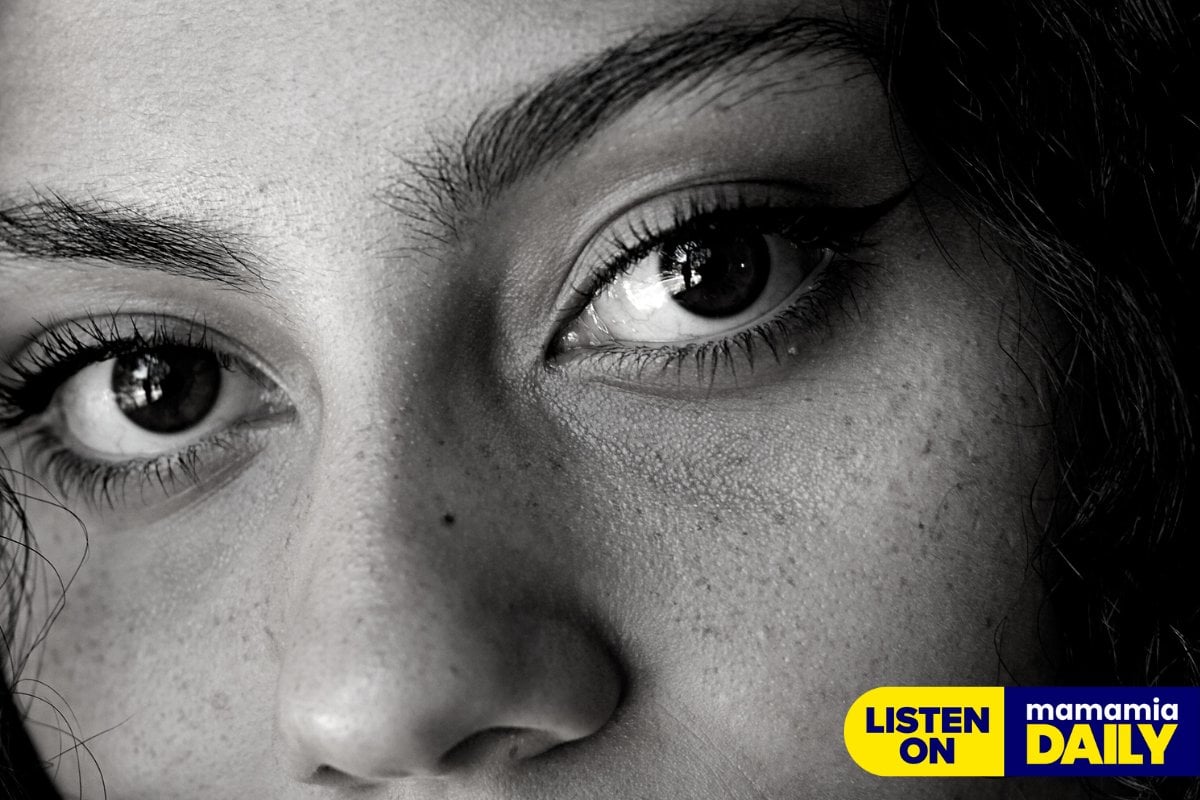 Listen to this story being read by Rebecca Davis, here.

Warning: Aboriginal and Torres Strait Islander readers are advised that this article contains the names of people who have passed. The feature image used is a stock image from Getty.

This post also deals with extreme domestic and sexual abuse and might be triggering for some readers.

We don’t know her name yet. Or the name of her little baby.

For now, they are known as the 40-year-old woman and infant child whose bodies were found at an outstation north of Alice Springs on Sunday.

With them, was also the body of a 41-year-old man. A firearm was located at the scene and the police are treating the “horrific” incident as domestic violence.

But perhaps you didn’t hear about it?

"Our hearts are hurting. Sometimes it feels like they don't have a chance to heal. But our voices say enough, the violence must stop," a statement from @TWFSG1 read, crafted in response to the loss of another woman and child from their community.https://t.co/NGPzMAKsiA

And maybe you also didn't hear about Kwementyaye Murphy?

She was 36 when she was beaten to death by her husband, Stanley Scrutton in Alice Springs, 2014. The autopsy reported she had cuts and bruises covering her body, brain bleeding, bruised lungs, a bruised bowel, and fractured ribs.

Police had been called to 45 domestic violence incidents between Murphy and Scrutton from 2003 until her death. The details released in the inquest are chilling, and include incidents where Scrutton had used a bottle to hit her in the face breaking a tooth, dragged her by the hair, and stomped on her head.

Did you ever hear about Kwementyaye McCormack?

She was also from Alice Springs. Police recorded 32 episodes of domestic violence over 12 years between her and husband Nathan Swan. Over that time, Swan had chased her with an axe and smashed the windows of her car, yelling “Get out of my house, I’m gonna half kill you”. He often choked her too.

In March 2015, her body was found in her home, in a pool of three litres of her blood. She had a fatal stab wound in her leg. Swan called the ambulance at 4.17am, but his account of the final moments of her life varied; he even attempted to pedal the story that she stabbed herself. Judge Greg Cavanagh found there “not one scintilla of reliable evidence” to suggest this was true.

Women And Violence: The Hidden Numbers. Article continues after video.

You may not have heard of these names, but I am sure you know of these women –

And you should. You should know their names, and about the women they were - beyond the horrendous acts of violence that stole their lives.

And we should also know the stories of Indigenous domestic violence victims too.

And we should be disturbed enough to ensure the systems offer them better protection and support.

But that begins with acknowledging their plight.

Because where are the headlining news items, and front-page stories of mourning and outrage and marches and demands for change?

The cases of the unnamed mother and her baby on the weekend, and Kwementyaye Murphy and Kwementyaye McCormack are not exceptions. Rather, they are indicative of the domestic violence crisis that ravages the Northern Territory.

Not only does the NT have the highest rates of domestic and family violence in the country, but the victimisation rates for Aboriginal people are 18 times higher than for non-Aboriginal people - significantly higher than other states, according to the NT Domestic, Family and Sexual Violence Reduction Framework, 2018-2028.

And devastatingly, 91 per cent of sexual assault victims are Aboriginal women and girls - half of whom are under the age of 19.

Kate Worden is NT Police Minister - and despite the magnitude of the crisis - she only became the territory’s first ever Prevention of Domestic, Family and Sexual Violence minister as of April this year.

Following the tragic incident earlier this week, she said she was “heartbroken” by the lack of national media coverage, and said it “should be all over the news,” ABC News reported.

Worden reflected on the disparity in the way the nation grieves Indigenous women as opposed to others.

Journalist and femicide researcher Sherele Moody echoed Worden’s sentiments, tweeting, “When’s Australia going to get angry about the cold blooded killing of a 40-year-old Indigenous mother and her tiny baby by a male domestic violence perpetrator?”

It's really quite distressing that so few people are talking about the three killed domestic violence victims in the NT over the past few days. We can't ignore these two women & the baby just because they were black and because they were from remote communities. Not good enough!

It is a sentiment echoed by Ashlee Donohue. She is a proud Dunghutti woman - and educator, and domestic violence advocate.

“The level of disregard for Aboriginal women in Australia shines bright like a diamond,” she told Mamamia.

She cites the recent report, The Choice - Violence of Poverty by academic Anne Summers, which explores domestic violence and its consequences in Australia today. Yet, it does not include data in relation to Aboriginal and Torres Strait Islander women.

“Is there any wonder there’s no coverage in the media?” Donohue poses.

1/2 A 40 year old Indigenous woman & her child were murdered in the Northern Territory on Sunday the perpetrator then ended his own life. Again silence, no outrage, front page news no nothing! Like @ShereleMoody said, if this was a white woman who lived in Sydney,Melbourne, con’t

“Domestic violence does not discriminate. It doesn’t matter if you are black, white or brindle; how much money you have; where you live; or what god you worship. But what does discriminate in Australia are the systems that are set up to protect women, particularly Aboriginal women. The fact that we were left out of the report proves that point.”

When Summers was recently challenged by Gunai/Kunai woman Veronica Gorrie on the omission of data pertaining to Indigenous women on ABC’s Q&A program, Summers said that due to a “sampling problem”, no data was captured by the federal government survey upon which she drew.

“The systems, the programs, so many of the initiatives that are developed around the anti-violence message is seen through a middle-class white lens, and unfortunately the lens does not see Aboriginal women in this country.”

NT Supreme Court Judge Judith Kelly gave a recent interview with The Australian; a rare occurrence for a sitting judge.

She felt compelled to speak out after the publication ran a three-part series on Ruby, a 21-year-old Indigenous woman who endured years of horrific sexual abuse and beatings at the hands of her father.

“When I read that, I was shocked by how shocked I wasn’t,” she said. “Because it’s a horrendous story, but we see that every day.”

Referring to the fatal shooting of Aboriginal men by NT police, Kumanjayi Walker in 2019 and another man in Wadeye in 2002, Justice Kelly said that in that same period, 52 Aboriginal women were victims of homicide - mostly by their partners.

“I’m not saying that the two shootings don’t matter. But that level of violence against women, in a non-Aboriginal community in like Sydney or Melbourne, there would be a huge outcry.”

Justice Kelly said the domestic violence "epidemic” was so severe that often women who tried to flee their circumstances had been effectively kidnapped and dragged to tiny outstations to face beatings and rape.

“These are not self-destructive women; these are women who can’t escape from a terrible situation,” she said. “These are not people who are complicit in their own victimhood. These people are doing their best to protect themselves, and they can’t.”

And one reason for that is deficient federal government funding.

Despite the disproportionately high rates of domestic violence in the NT, decisions on the current funding levels are made based on population size rather than demand.

Worden has renewed a push to change that protocol.

Further, services need to cater to the sparsely located and linguistically diverse populations of the territory.

It’s a call that has been echoed more broadly by Wiradjuri woman, Professor Lisa Jackson Pulver. She is an epidemiologist and researcher in Aboriginal health - and Deputy Vice-Chancellor of Indigenous Strategy and Services at the University of Sydney.

“For the greatest change to happen, we need to let the community dictate what it needs,” Professor Jackson Pulver told Mamamia in regards to the dire need for improved Indigenous health outcomes.

Donohue concurs and puts it plainly: “We need programs on the ground. There should be an Aboriginal Women’s Centre in every single town in this country.

“Listen to Aboriginal women. We’re telling you what we need. But those in power aren’t listening.”

And first, we need an outcry.

Mamamia recognises that Aboriginal and Torres Strait Islander women are the unheard victims of domestic violence and wants to break the silence. In 2022, we’re making a commitment to tell more of their stories, amplify their voices, raise awareness of the issue, and be united in our conversations about how we end violence against women for good.

If this post brings up any issues for you, or if you just feel like you need to speak to someone, please call 1800 RESPECT (1800 737 732) – the national sexual assault, domestic and family violence counselling service.

Reply
Upvote
1 upvotes
This is a great article because msm does not really cover DV in most cases.. However three inner city women were murdered by strangers, not DV. These types of deaths typically result in a lot more media coverage.
N
niki.horin 20 days ago