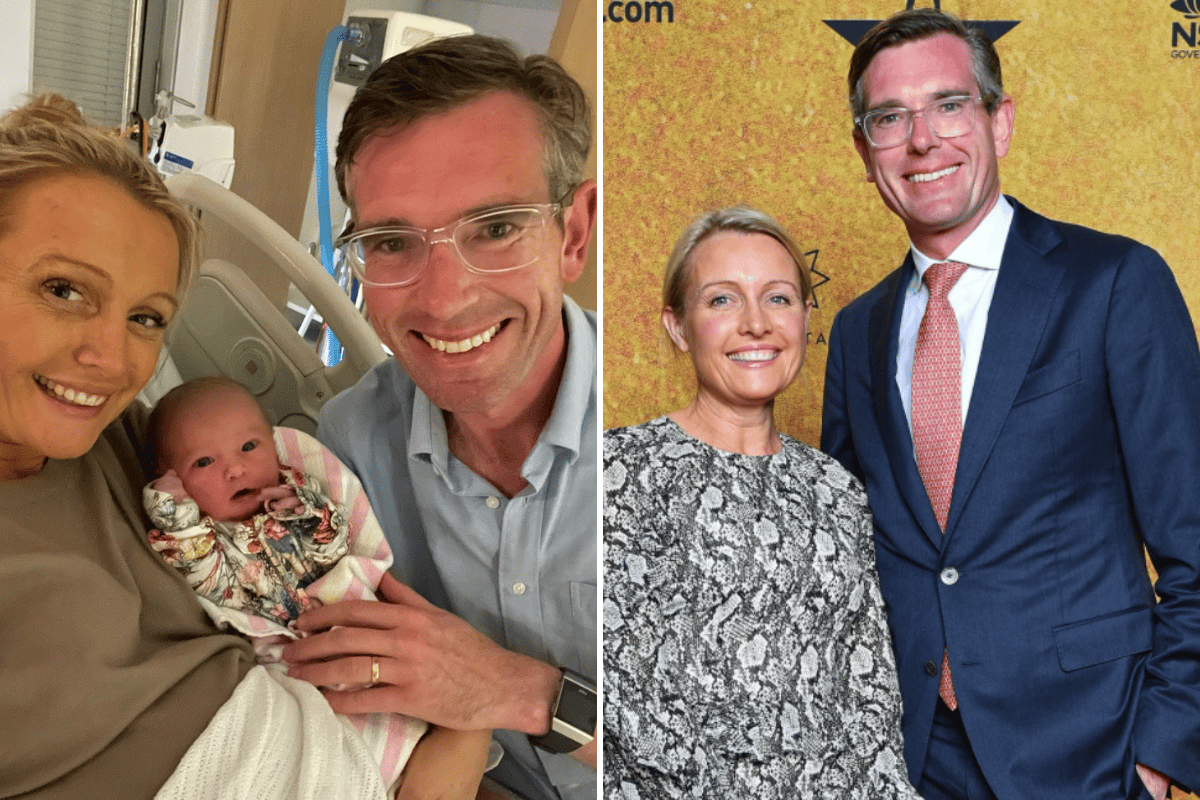 He's the man who stepped in to fill Gladys Berejiklian's shoes last year.

Now, Dominic Perrottet has been the NSW premier for five months - and he's the youngest one at that.

Outside of his career, the 39-year-old is a brother to 11, a husband and now, a father of seven.

"Here she is! Helen and I are absolutely thrilled to welcome our beautiful baby girl, Celeste Grace Perrottet, born last night. Both Mum and baby are doing well," he wrote alongside a photo of his wife and baby in hospital.

"She's looking forward to being kissed and cuddled, fought over and cherished by her big brother and sisters."

1/2 Here she is! Helen and I are absolutely thrilled to welcome our beautiful baby girl, Celeste Grace Perrottet, born last night.

Both Mum and baby are doing well. pic.twitter.com/En4LjGL5uf

Perrottet first announced that he and Helen were expecting their seventh child together in October.

"Exciting family news," he wrote on Facebook at the time.

"Our family photo wall is going to need another frame! Helen and I are thrilled to announce we have a little girl due next year."

"With five sisters already, William is looking on the bright side - more bench depth on the family basketball team."

In light of the news, here's everything we know about NSW Premier Dominic Perrottet's family life.

Watch: Dominic Perrottet is asked how he plans to manage being the NSW Premier and father of then six children. Post continues below.

Growing up as one of 12 children.

Before he delved into the world of politics, Perrottet grew up in a big religious family of 12 children in Sydney's North Shore. Sadly, a thirteenth child died at birth.

Perrottet previously spoke about his upbringing during his maiden speech when he first entered parliament in 2011.

"I had the privilege of growing up in a large family. I am the third of 12 children. As you may imagine, my mother ran a very tight ship," he said at the time.

"But with so many of us around, she realised very quickly she could not get everything done by herself. I polished 12 pairs of shoes in summer. I packed 12 lunches in autumn. I changed 1200 nappies in winter and then changed them again in spring."

For school, Perrottet attended Redfield College and Oakhill College in Sydney. He later studied economics and law at university before working as a commercial lawyer. He was also the President of the NSW Young Liberals in 2005.

His beginnings in politics and religious beliefs.

Perrottet was elected to the state parliament at the ripe age of 29, after winning the Liberal seat of Castle Hill in 2011. Before that, he previously served on the Liberal Party's NSW State Executive.

After Castle Hill, he moved to the seat of Hawkesbury, before landing the seat of Epping in 2019. During that time, he was appointed Minister for Finance and Services in 2014, before becoming the Minister for Industrial Relations, the Treasurer and the Deputy Leader of the NSW Liberals in 2017.

Throughout his political career, Perrottet has remained a proud conservative and devout catholic.

"I think having a Christian faith is part of who I am and inspires me to make a difference wherever I go," he said last year.

In 2019, Perrottet voted against decriminalising abortion in NSW, saying anyone who believes women should have a right to an abortion are on the "wrong side of history". He has also spoken out against same-sex marriage.

Three years earlier in 2016, he shared a now-viral Facebook post praising Donald Trump's election as the US president as a "victory for people who have been taken for granted by the elites".

"If you want a plebiscite on same sex marriage, you are not a homophobe. If you love your country, you are not an extremist. These are mainstream values that people should be free to articulate without fear of ridicule or persecution by the Left."

His family life with seven kids.

On his first day of the job, the premier was famously asked how he planned to juggle being a father to then six children while also serving as the leader of the state - a question historically asked of women.

"You said you were going to be the first Premier for families. If you were a female leader, you would be asked how you can manage being Premier and also the parent of six children, so I think it is fair to ask you that today," the reporter said.

While Perrottet acknowledged it would be "demanding", he said finding the balance between work and family life is a challenge for every person across NSW.

"I think what I might lose in time, I gain in perspective. Everyone has their strengths and weaknesses, and I am no different to that, but one thing I do know is that I have a very strong team around me," he replied.

"I have a strong family and I have a strong ministerial team who will ensure that our focus is on the people of NSW. Yes, I have family commitments, but that should not disqualify one from the job."

As for Perrottet's wife, she's worn many hats.

She was previously an Australian Federal Police officer, worked in public relations for the Australian Defence Force and currently works as a solicitor. 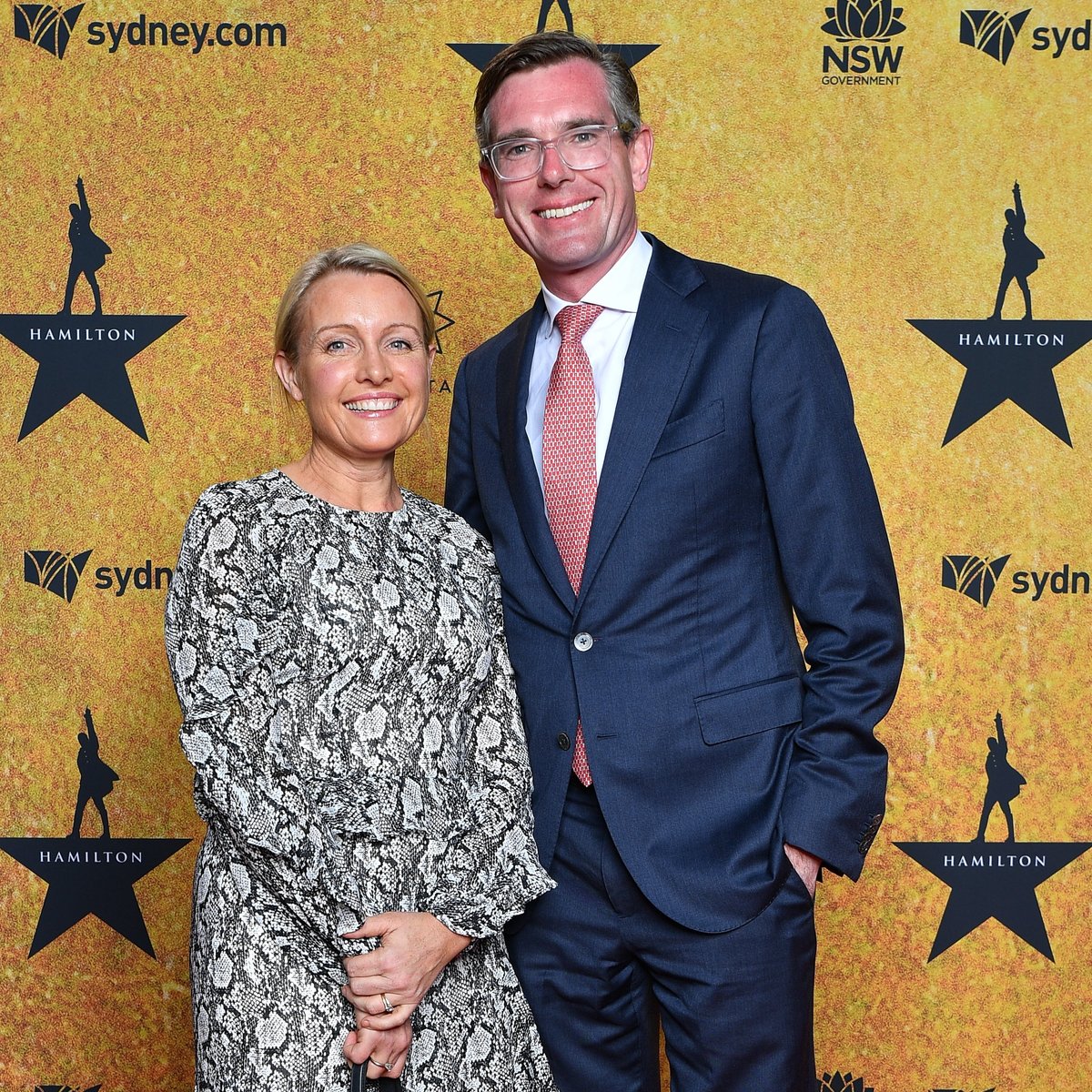 Dominic Perrottet and his wife Helen. Image: Getty. Perrottet praised his wife during his maiden speech to Parliament, pointing out how "immensely proud" he is of her.

"My amazing wife, Helen, knows the demands of work and family that we as Australians face in the twenty-first century," he said at the time.

"For many years while working full time in numerous jobs, including the Australian Federal Police and the Australian Defence Force, Helen also worked late into the night completing a law degree at night school."

"Late into the night she applied herself to her studies and cared for her family. I am immensely proud of her as a talented professional, as a soul-mate, and above all as a mother who continues to give everything she has to her children."

Parents, we want to hear from you! Complete this survey to go in the running to win a $50 gift voucher.

Reply
Upvote
1 upvotes
Can't help but feel Perrotet has been going softly, softly, since he knows that he replaced an elected moderate, but the gloves will come off should he win the election.
Australia can't afford another leader, state or federal, who is spruiking a disbelief in climate change and worse, enacting policies underpinned by such. Nor, can Perrotet claim that such a position is mainstream, it's not and hasn't been for some time, but somehow the LNP has managed to keep those embers burning, despite lacking a mandate.
A
anonymous 8 months ago