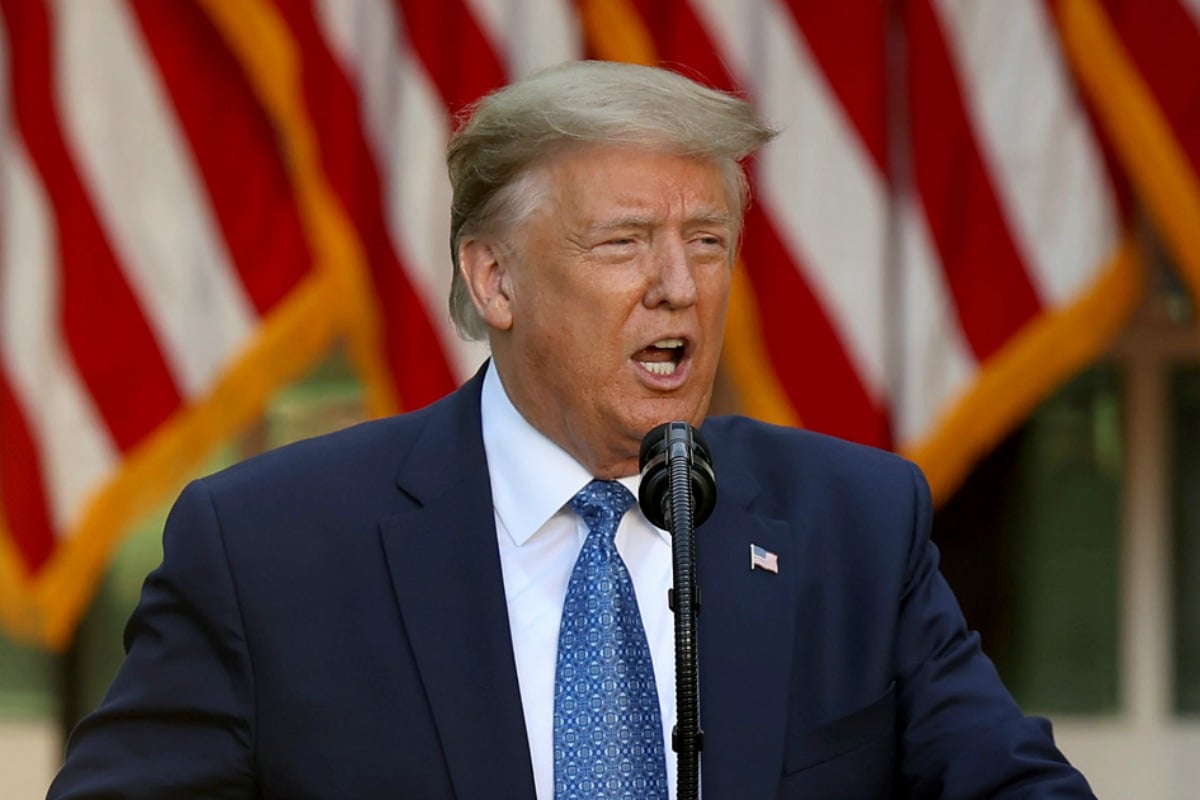 It has been six days since George Floyd, an unarmed black man, was killed by a white police officer in Minnesota. Protests have spread across the country, with hundreds of cities staging their own demonstrations. Tensions have escalated between protesters and police, with more than 4400 people arrested and several dead. The National Guard has been deployed in 23 states, and curfews have been implemented in dozens of cities across the US. This level of civil unrest is something unseen in the US since the 1968 assassination of civil rights activist Martin Luther King Jr.

Trump’s live broadcast began with an assurance that for George Floyd and his family, justice will be served.

Watch some of Donald Trump’s address regarding the nationwide protests. Post continues below.

“He will not have died in vain, but we cannot allow the righteous cries and peaceful protesters to be drown out by an angry mob,” he said, before announcing that he was deploying the military on his own people.

He said he has, “strongly recommended to every governor to deploy the National Guard in sufficient numbers, that we dominate the streets, mayors and governors must establish an overwhelming law enforcement presence until the violence has been quelled.

“If a city or state refuses to take the actions are are necessary to defend the life and property of their residents, then I will deploy the United States military and quickly solve the problem for them.

“As we speak, I am dispatching thousands and thousands of heavily armed soldiers, military personnel, and law enforcement officers to stop the rioting, looting, vandalism, assaults, and the wanton destruction of property… We will end it now.”

Trump referred to himself as an “ally of peaceful protesters”, and as he made his way to St. John’s Church for photographs, it’s reported that hundreds of peaceful demonstrators were targeted by police who used tear gas.

In a leaked call obtained by The New York Times, Trump told governors: “You have to dominate… If you don’t dominate, you’re wasting your time – they’re going to run over you, you’re going to look like a bunch of jerks.”

Trump’s response comes after tensions rose over the weekend in Washington DC. On Sunday night, the White House was surrounded by barricades, police officers dressed in riot gear, deliberately lit fires, and swarms of demonstrators. According to The Washington Post, water bottles were thrown at police, and they responded with tear gas, making it difficult for protesters to breathe.

A fire broke out in the basement of St. John’s, a historic 19th-century episcopal church. The fire department eventually put it out, reportedly before there was significant damage.

Office buildings had their windows smashed, with stores like Nordstrom Rack looted by civilians.

As the 11pm curfew approached, the lights in the White House were switched off.

It has been reported that on Friday night, President Trump and his family were rushed to the White House bunker by the Secret Service, as crowds gathered at the gates. They stayed there for less than an hour.

Reply
Upvote
I bet the Mayors and Governors of those cities which have been trashed and where anarchy reigns, will be very grateful (although they will publicly condemn Trump) for the military intervention, if it stops the chaos.
A
anonymous 2 years ago

Reply
Upvote
4 upvotes
@nell  What do you mean by stop the chaos? Black people going quietly back to being killed by police? The Mayors and Governors seem to be just as ashamed as anyone that this has continued to happen and prefer to allow the protests to happen safely and peacefully. It's the mentally-challenged one in the Oval Office who has escalated it to the point it is at. He is just ridiculous.
N
nell 2 years ago

Reply
Upvote
@anonymous are you seriously suggesting that the destruction of cities, looting, throwing Molotov cocktails, trashing businesses, shooting cops isn’t chaos?   The mayors and governors of those cities are too frightened to condemn the protestors and were quite happy for the protestors to torch police buildings.   In the beginning that is.  Now they don’t know how to stop what their inaction started.   Trump’s tweeting and seeming indifference has been shocking but he is not responsible for what is happening in each of those cities
A
anonymous 2 years ago

Reply
Upvote
@nell Oh but he is. Since he became President, he has frequently inflamed the divides, all to aid the perception of him as a President for the Conservatives (or haters as I refer to them.) The police forces throughout the US are full of hating types, as we saw in footage today of cowardly cops spitting on a handcuffed protester. Every time President Chump does nothing about another black death or incites violence, he is responsible. The Conservatives of the US are a particularly hateful, backward bunch and Trump is saying loudly he is their leader. God help America if that kind of redneck thinking gets another term.
N
nell 2 years ago

Reply
Upvote
1 upvotes
@anonymous out of curiosity, have you ever met a Republican?  As for the police forces in America, the President has no oversight over them.  They are under the control of their city's mayor and in the case of the cop who asphyxiated George Floyd, he should have neen kicked off the force years ago.   Whoever allowed him another free pass is the one who should be held responsible.    Spitting in a protestor is revolting, but not as revolting as protestors throwing bricks, molotov cocktails and even shooting them which is what happened to 4 St Louis cops yesterday.
A
anonymous 2 years ago

Reply
Upvote
3 upvotes
The US is in free-fall because they have no leader. If the majority of Americans overlook Trump's narcissistic personality to re-elect him in November, the diminishment of the office of President will be final and irrecoverable. The great US of A will be over. He is a very dangerous, troubled man.
S
snorks 2 years ago

Reply
Upvote
3 upvotes
@anonymous While I agree he's a bad leader, riots such as this are common amongst the last few presidents reigns.
C
cat 2 years ago

Reply
Upvote
2 upvotes
@snorks The difference is that all other presidents have de-escalated them, rather than inciting further hatred and violence.
S
snorks 2 years ago

Reply
Upvote
@cat So the previous presidents were just ineffective then, rather than inciting? Given the outcomes not sure it makes much difference.
S
salemsaberhagen 2 years ago

Reply
Upvote
2 upvotes
@snorks No one is suggesting Trump created these riots, but it is the way a leader responds to a crisis, that defines the leader and nation.  For e.g we've always had bushfires during the last several PMs, that's not the point. The point is, how a leader leads his (or her) people.  Some PMs have handled previous bushfires better than Morrison, for example.  A good leader - President or Prime Minister, will console, unite, calm their people. They will lead in conciliatory tones, and attempt to put out the (metaphorical) fires. Not fan the flames as Trump is.  I think you are missing the point completely and entirely.
Resources
Very Peri
News
General
Opinion
True Crime
Politics
Sport
Explainer
Entertainment
Celebrity
Reality TV
Movies
TV
Books
Rogue
Royal
Lifestyle
Beauty
Fashion
Weddings
Home
Wellness
Health
Fitness
Travel
Food
Family
Before The Bump
Pregnancy
Baby
Kids
Teens
School
Parent Opinion
Work & Money
Money
Finance
Career
Lady Startup