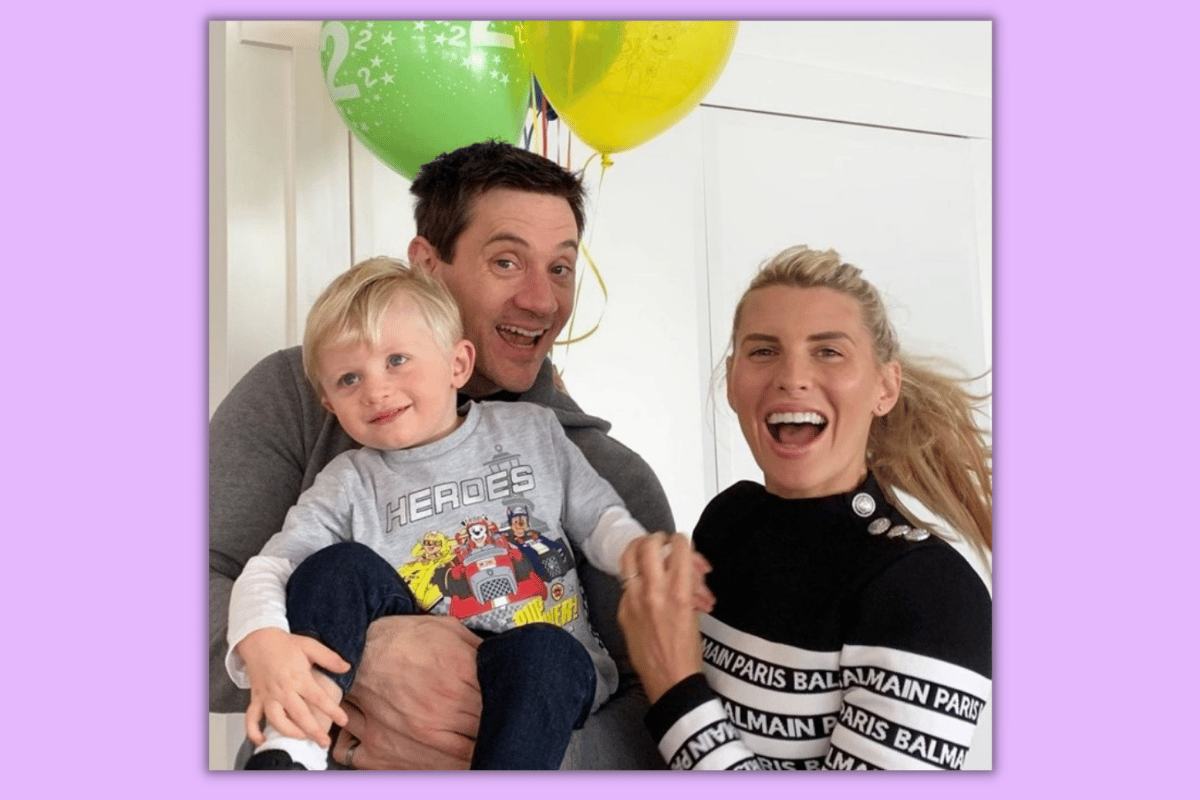 Tiffiny Hall and Ed Kavalee have announced the birth of their daughter Vada, by sharing a beautiful black-and-white image of the newborn's hand to Instagram. Mum Tiffiny wrote: "Arnold’s little sister has arrived. Welcome Vada Kavalee. 30.5.2022."

Fans and famous friends of the couple offered their congratulations and plenty of love heart emojis for baby Vada in the comments.

While Tiffiny and Ed enjoy getting to know and falling in love with baby Vada, their love for each other was instant. According to Ed, they probably should have wed immediately.

"We should’ve got married after our first date, in hindsight," Ed told 9Honey in 2018.

"We should’ve had kids after our second date – because once you start looking back, you realise everything was there."

The loved-up couple met when comedian Ed kept inviting Tiffiny onto his radio show in 2008. Tiff was then working on the Channel 7 show Gladiators as a competitor named 'Angel' and didn't notice Ed's early advances.

"You were very charming and very funny," Tiff said in the 9Honey interview with Ed. "And I liked you, very tall and handsome and there we go: The rest is history."

"How Can I Be Sure My Kids Won't Experience Racism In The Playground?"

It took three radio interviews and some gentle persuasion from Tiff before Ed took the hint and asked her on a date.

"I kept having to get up really early to go and do these interviews," Tiff recalls. "On the third interview I said, 'Ed, just ask me out for dinner'."

Ed rang Tiff to set up their first date from a bookshop at Sydney airport. The rest, as Tiff said, is history.

"From the day we met, we were inseparable," she says.

"He made me feel good, and he also made me feel like the best version of me, I guess. And I thought he’s fun, I’d like to do life with you."

Ed planned to propose to Tiff at an exclusive restaurant, but fans wanting to say hello scuppered his romantic plans. Instead, he waited until they got home and were both in their pyjamas.

"Both of us were in tears," Tiff recalls.

The couple wed in Melbourne in October 2014, choosing an intimate ceremony with just close friends and family in attendance.

“Ed cried all day,” Tiff said in an interview with New Idea magazine. “During the ceremony, during the speeches, during the dance – he was very emotional. But I didn’t cry once. There was so much organisation in the lead-up that I was like, ‘I’m going to enjoy this!’ and I was just euphoric.”

The health-focused pair then spent a few years on their respective work projects.

Comedian and breakfast radio host Ed began working on the hit Channel 10 show Have You Been Paying Attention? While former Biggest Loser trainer Tiff left her successful television career behind to focus on growing her own fitness business, TXO by Tiffiny Hall.

She told Mamamia in an interview in 2021 that she has no regrets about her career shift.

"I didn't like the narrative of reality TV and I didn't agree with The Biggest Loser's ideals and values at the time," she admitted. "I was really happy to let that go and I don't think I'll ever return to television."

While Tiff was well known for her fitness routines and ripped abdominals, she has been incredibly candid about how experiencing a difficult pregnancy and becoming a mum to baby Arnold in 2017 has changed her.

"I put on 30kg, I was sick the whole time – right up until my last contraction and all I wanted was sausage rolls," she told news.com.au.

Arnold's birth was incredibly fast and stressful, as Tiff described in an interview with Kidspot in 2017.

"I didn't have any time to enjoy the epidural. They pretty much flung me back, my legs went up in the stirrups and I had to start pushing," she said.

"[Ed] saw the heart rate of the baby drop and everyone came rushing in.

"He saw the cord wrapped around the baby's neck as he came out and he saw the obstetrician just reach it around his head to relieve him. It was pretty full-on for Ed."

A few days after Arnold's birth, Tiff posted a photo of her cradling her beautiful newborn son in a cute knitted outfit. The comments that rolled in really surprised her.

“All the comments were about my tummy and not my gorgeous baby,” she told Stellar in 2017.

“I was wearing a singlet, and I still looked very pregnant with fat arms, yet all these women were thanking me for being honest in showing my body. It made me realise that women really do feel pressure to bounce back — even five days after having a baby. I thought, ‘That’s it — I’m going to keep putting out images of my body’.”

Ed was incredulous at the way Tiff and new mums generally get treated just days after they give birth, as he told Stellar for the same feature.

"What other surgery do people expect you to be completely rid of five days after you’ve had it? If I had a liver transplant, no one would expect me to be on Instagram five days later with the hashtag #noliver. No one expects you to break your arm and be #javelin.”

In April 2021 and just after launching her new activewear line TXO Flex, Tiff shared on Instagram that she was suffering with chronic fatigue syndrome (CFS), also known as myalgic encephalomyelitis (ME), and postural orthostatic tachycardia syndrome (POTS).

She told her over 220,000 followers that she needed a break from social media to get well.

Tiff wrote in a heartfelt post: "While I’m staying positive, recovery is tough and will mean taking a break for a little while to get well again. This is one of the hardest decisions, but I have to practise what I teach. For now, I’m prioritising recovery and family, and hopefully will be back in no time."

In an interview with Mamamia in August 2021, she explained how she experienced fatigue back in her teens and twenties.

"I was 14, and I had this fatigue – I couldn't concentrate, I had brain fog, nausea, heaviness in my bones and achiness in my body. And no matter how much sleep I got, it never made a difference," Tiff told Mamamia.

"So I went to every doctor, and no one knew [what it was]. I ended up having one year off school in year nine, I lost contact with friends and had a horrible, isolating experience.

"But then throughout my 20s, uni and my career, I kept having these crashes, where I would go full on – do TV, fitness – and then I would have these weeks where I couldn't get out of bed; where I felt like I had the flu and couldn't concentrate.

While she managed to stay well for many years, her symptoms came back with a vengeance after Arnold's birth, leading to her eventual diagnosis of CFS in 2021.

"I was running a business, had a baby, and then I had a crash. I never had a crash as a mother before," she said.

"I'm pretty much at a stage now where I have to accept it. And it gets to me.

"[But] now it's just a new normal, where I have to manage looking after my business, my family and myself," she said.

Happy news followed when, in December 2021, Tiff announced to Instagram she was pregnant with baby number two.

Both Ed and Tiffiny appeared as the cover stars for the corresponding Men and Women's Health magazines in May 2022.

Tiffiny was the first pregnant woman to be featured on the cover of Women's Health Australia at 26 weeks pregnant. She wrote about her experience and how proud she is of her growing pregnant body.

"Over my 20 years of experience in the health and fitness industry, I have seen it evolve into a landscape that now embraces the beauty of pregnancy as well as postpartum bodies. It was once taboo to show your bump in tight clothing – let alone a naked bump – or even as I have… exercising and staying active whilst pregnant.

"I’m proud of my strong pregnant body and believe the bump and a woman's ever-changing body should be celebrated in all its glory at every shape, size and stage of life."

Of Ed's cover image for Men's Health Australia, Tiffiny wrote on Instagram that she could not be more proud of him. She joked, "it's amazing what a spray tan can do", regarding Ed's incredibly ripped physique.

The couple acknowledge a generous dose of fun helps to make their long-term relationship a success.

"Any moment you can take to have a little bit of fun together is worth it," Ed said. "Everything is cumulative."

“For me, it’s that Ed keeps things light,” said Tiffiny in New Idea.

"Obviously, he’s funny – being a professional comedian – but I’ve always enjoyed his sense of humour and his lightness. And he’s raising Arnold with such a sense of fun."

And Ed's couldn't be happier to be raising his children with Tiffiny.

"It's beautiful watching her gorgeous nature and sunny outlook on life coming through in the next generation – I'm the luckiest man in the world."