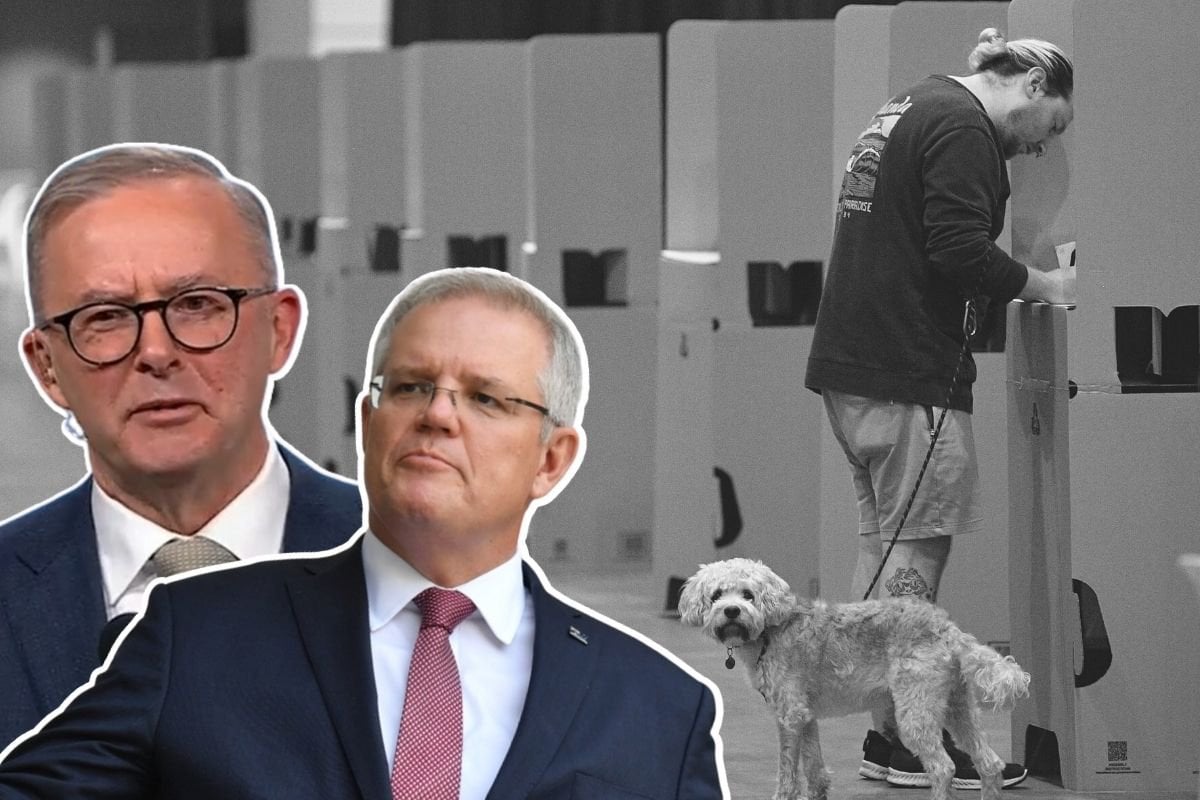 As a journalist, my days are book-ended in the same way. With news.

I read it first thing in the morning. I watch it before I go to bed.

And each day, I bear witness to The Latest Adventures of ScoMo and Albo: On the Campaign Trail.

Every day they pledge and scare; all while handshaking, high-fiving and holding babies across the country.

They awkwardly banter with us regular folk in an attempt to feign relatability and an image of a "trusted bloke who'll get the job done”.

One promises, "A better future”; the other, ”A strong economy”… and "A stronger future”. One isn’t sure of the national rate of unemployment; the other, doesn’t know the weekly JobSeeker rate.

Can I look away yet?

Because when it comes to representing the very real issues that affect voters, there has to be more than daily gaffes, patting dogs, and weaponising curries and Jimmy Barnes performances.

Indeed, on May 21 we will cast our vote - and a sincere hope - for a “better” or “stronger” future. From the bushfires and floods that have ravaged our country, to a pandemic of “unprecedented” proportions, the supply limbo in which we are suspended as the result of the war in Ukraine, and the upwards pressure on the cost of living… It’s fair to say the last few years have left us rather battered, bruised and still gasping to get our breath.

These are uncertain times. And we want - need - someone to lead. To uplift.

Someone with equal spades of strength, conviction, and compassion. Who is not afraid to roll up their sleeves and do.

Someone who commands respect.

And I'm going to admit something to you: I've never been less inspired by what's on offer. And I don't just mean the men that represent their parties, but the in-bickering and rogue MPs who stand behind them, on each side of the aisle.

Perhaps I sound a little cynical. Maybe I am.

But when I look at Morrison and Albanese, nothing really resonates. I don’t feel represented, and I’m sure not filled with confidence that either will deliver on the "better" or "stronger" future they purport to offer.

And I also don’t believe they can truly relate to me or the (politically diverse) people in my circle.

Like, the friend who is re-thinking having children because she is worried about the climate catastrophe and the future of the world and the environment.

The mum who is being forced to choose between work and childcare.

The friend who despite saving money feverishly, is still a few years away from being able to afford a mortgage… for an apartment.

The family friend who had their menial aged pension cut for choosing to continue to work a few hours each week.

The friend who is as a member of a minority group and fears for their safety.

The friend who has to choose between a full tank of petrol and using their heater.

And my many girlfriends who lament the unequal treatment they receive as a result of nothing more than their gender: less pay, reduced access to opportunity, and the need for better support and protections against domestic and family violence.

What I see are two men that talk a lot… but appear to be a bit… out of touch?

It feels all too familiar. The same old political-speak. And these are the best candidates that the two major parties can put forward?

Or perhaps this is part of a bigger phenomenon of largely underwhelming politicians and world leaders? Because, I can’t think of a head of state who invokes the great awe and admiration of yesteryear. A Winston Churchill or Abraham Lincoln. A Mahatma Gandhi or a Golda Meir.

Well, except one, of course: Ukrainian President, Volodymyr Zelensky.

In fact, a recent Pew Research Centre survey found Americans have more confidence in Zelensky as a world leader (72 per cent), than their own president Joe Biden (48 per cent).

Zelensky’s appeal? Up until three years ago, he was a comedian and actor, with no experience in politics. Now, he is a fearless president, who has stood resolute in the face of the Russian war machine.

His strong words have inspired his people and the Western world.

His presence has too: unshaven with heavy bags under eyes, he effortlessly pivots from addressing media and worldwide parliaments in his khakis, to being alongside his troops in the trenches.

Because, he feels… authentic.

And isn’t that what we want to see and gravitate towards, rather than perfectly rehearsed talking points, and carefully coordinated photo opportunities?

So, here is me being real with you: As someone long engaged with politics, I feel apathy towards the power of my vote, and pessimism on the promise of meaningful progress.

And I wonder, in this age where we increasingly choose to spend our money more mindfully, with brands that align with our values or champion social-consciousness, does the gloss of electioneering feel intolerably transparent. Have we evolved beyond the theatrics of the campaign paradigm?

Last month, Mamamia surveyed 5000 readers about what matters to them in this election. When asked what names they wished were on the ballot, the answers were: Penny Wong, Jacinda Ardern and Tanya Plibersek, followed closely by a woman who is not a career politician at all… Grace Tame.

Irrespective of where your political leaning falls, it is clear that many of us are ready for a shake up, a watershed moment.

Reply
Upvote
2 upvotes
I am horrified to see an article like this published here. This election is so so important for our future. Its not about personality. Its about policies. Its crucial that we act on climate change and there are so many opportunities for Australia in renewable energy! If you are unhappy with the major parties that is understandable, but there are smart successful independent women running in many electorates (Nicolette Boele, Zali Steggall, Jane Caro in the Senate.) People are working hard to create  change - you just need to look a little further than the front page to find them.
L
laura__palmer 21 days ago

Reply
Upvote
3 upvotes
Australia will not survive if we get another term of the LNP. The corruption, the mismanagement of the budget, the lying, the sheer disregard for workers, the widening gap between rich and poor, the housing crisis, the health crisis, the public education crisis, the dog-whistling, the ineptitude. There is a clear choice, imo. It's to make sure this absolute joke of a government does not get in again. And, hopefully, Labor can deliver for the people, the workers,  like they have in the past.
G
gypsy 18 days ago

Reply
Upvote
2 upvotes
@laura__palmer   Everything you said is absolutely correct. We have to rid ourselves of this dreadful government. When you said  Australia won’t survive, you are right in more ways than you mentioned. He is dangerous with the China relationship, extremely concerning.
D
daijobou 17 days ago

Reply
Upvote
3 upvotes
@laura__palmer I am furious at the Morrison government. After 2 years of the fed liberals belittling and criticising our States pandemic response, to the point of supporting private citizens in litigation against WA, they are now handing out pamphlets in my electorate gloating about how great is is that THEY managed the COVID response.
L
laura__palmer 17 days ago

Reply
Upvote
@gypsy So concerning! I don't know what I will do if they get in again, surely the people of Australia can see through this terrible government and realise that they are dangerous, inept and corrupt,
L
laura__palmer 17 days ago