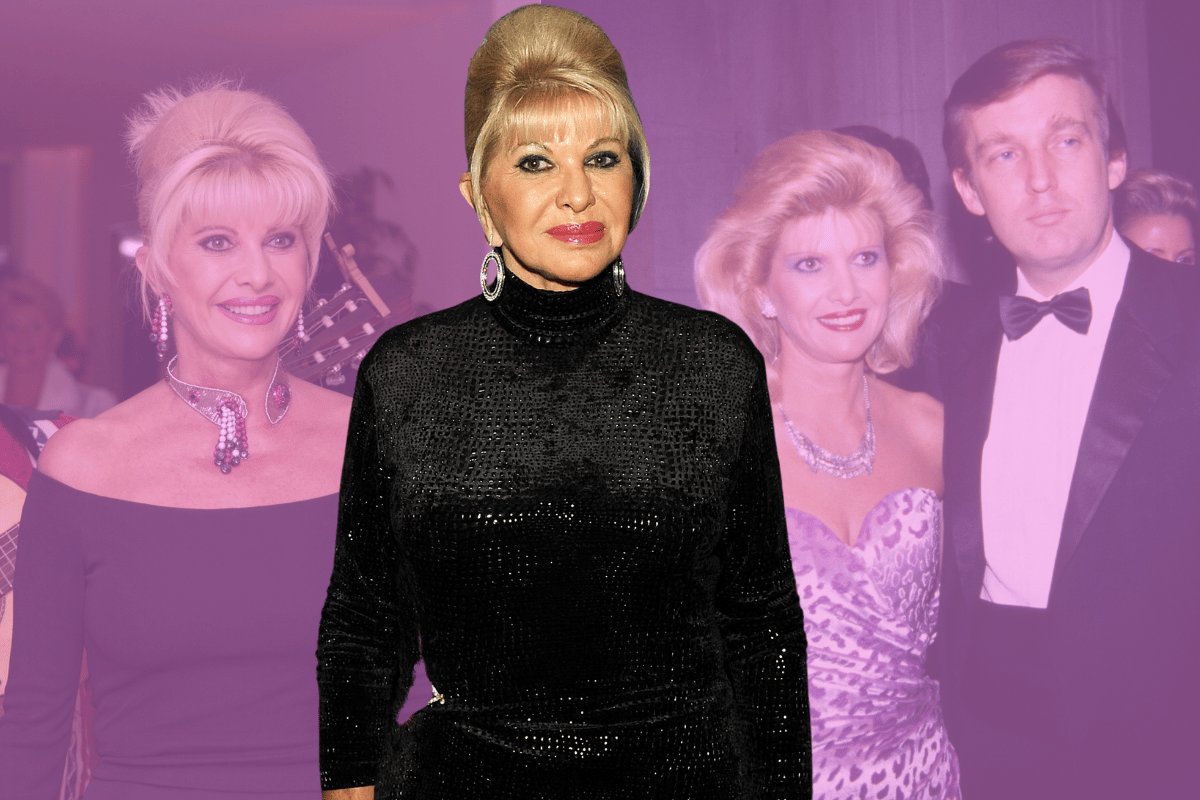 "Ladies, you have to be strong and independent. And remember - don't get mad, get everything!"

It was the iconic quote that made countless headlines, and won Ivana Trump a legion of fans at the time.

She had just made a cameo appearance in the hit 1996 movie The First Wives Club.

As the first wife of the infamous Donald Trump, Ivana was in the process of a high-stakes divorce with Donald - a divorce that appeared on the front pages of the New York tabloid newspapers for 11 days in a row.

She ended up walking away from their marriage with around $US25 million ($36.7 million) as per their prenuptial agreement.

One of the conditions of the agreement was that she wouldn't speak publicly about Trump or their marriage. But it was a rule she decided to bend every now and then - as she did in The First Wives Club.

The movie, starring Goldie Hawn, Diane Keaton and Bette Midler, followed a trio of scorned first wives who decide to exact revenge on their estranged husbands in the best way they know how - by using their ex-husband's money for good.

It was a sentiment Ivana must have connected with.

Ivana was born Ivana Marie Zelníčková in Zlin, a factory town in then-Czechoslovakia.

After graduating from a university in Prague with a master's in physical education, she married Austrian ski instructor Alfred Winklmayr. It was what she would later term a "Cold War marriage".

It was an arrangement between friends - a way for Ivana to secure an Austrian passport and be able to move to Canada without formally "defecting" from her then-communist home country.

The marriage ended soon after.

Settling in Montreal Canada, Ivana went on to work as a ski instructor, took English courses and also worked as a model. It was her modelling work that led her to meet Donald Trump.

While on a shoot in New York City in 1976, the pair met and hit it off. They were married less than a year later, and welcomed three kids together: Donald Jr., Ivanka and Eric. Ivana then became a "naturalised United States citizen" in 1988.

For the next decade and a bit, the Trumps were an 'it couple' in New York society - spotted at charity galas, Broadway openings, photographed on red carpets and their pictures often in the tabloid press.

Ivana spent her time working for Trump on multiple business projects, often related to interior design and decorating. A former Trump Organisation executive, Barbara Res, said Ivana had "a tremendous work ethic", but did it all "to impress Donald, to win his approval". 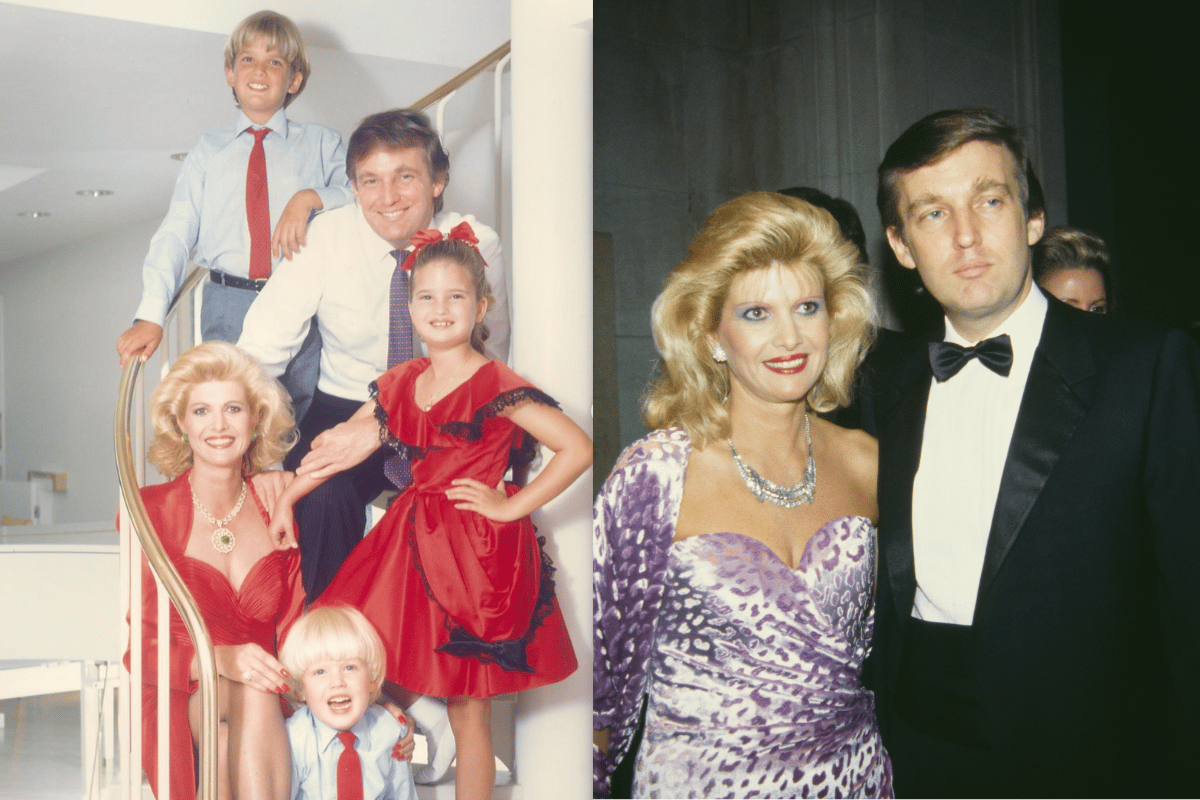 Image: Instagram/Getty. Given Donald Trump loves a bit of nepotism, you can imagine that Ivana had some particularly key roles in his business dealings too.

While she and Donald were married, Ivana ran Trump's Castle in Atlantic City as CEO. She also was named president of the Plaza Hotel in Manhattan - the first woman to hold that title - in 1988, and designed the interiors of the Grand Hyatt Hotel and Trump Tower.

In her book, Ivana wrote that she knew her marriage was doomed after a 1989 run-in with Marla Maples. She was having an affair with Donald.

Listen to Mamamia Out Loud. Post continues after audio.

"This young blonde woman approached me out of the blue and said 'I'm Marla and I love your husband. Do you?'" Ivana wrote. "I said 'Get lost. I love my husband.' It was unladylike but I was in shock."

The encounter happened outside of Bonnie's restaurant on Aspen Mountain in front of onlookers, according to a report in The Aspen Times.

Maples would go on to marry Donald in 1993 and together they had daughter Tiffany Trump. They divorced in 1999.

Ivana had signed a prenuptial agreement that put a US$25 million limit on what she could take in a divorce settlement. The agreement also granted her custody of the couple's children, a Connecticut mansion, spousal and child support, plus time at Mar-a-Lago - Trump's Florida hideaway.

Though an attorney representing Ivana called the document "unconscionable and fraudulent," hoping she could fight for more in the settlement because of her contributions in building the Trump empire.

As the couple fought over the divorce in 1990, Donald reportedly locked her out of her office at the hotel to spite her. Around the time, media referred to the divorce as a "billion dollar blowup".

Reflecting on the ordeal, Ivana said in her book: "I can only shake my head at how insane it was. I couldn't turn on the television without hearing my name." 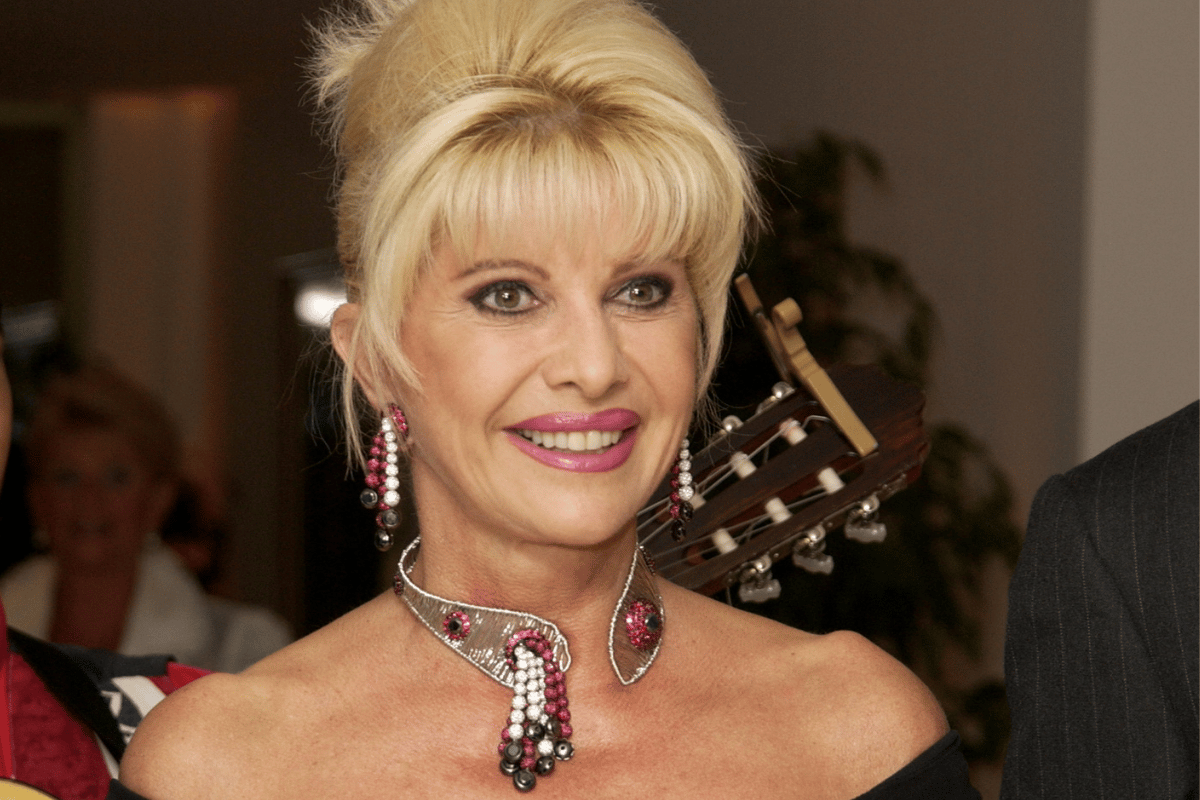 Image: Getty. In 1993, Ivana began dating Riccardo Mazzucchelli - a rich Italian businessman. They were married for two years, and Mazzucchelli was asked to sign a prenup which he did.

At the time of their divorce, Mazzucchelli told PEOPLE: "I loved Ivana a lot, and I think I did my very best. I did for her more than Donald ever did."

Later that year, Ivana sued Mazzucchelli for $15 million for allegedly violating the confidentiality clause of their prenuptial agreement. He then filed a libel lawsuit against Ivana and Donald in the United Kingdom. Both settled outside of court.

Over the next few years, Ivana focused on her writing. She penned numerous books, including Raising Trump, Free to Love, and The Best Is Yet to Come: Coping with Divorce and Enjoying Life Again.

She was also quite the fashion icon, with her House of Ivana products sold on QVC London and the Home Shopping Network. Ivana later said she made her "tens of millions," from selling the products.

And throughout all of this, she continued to have main custody of her three children.

In one of her books, Ivana said: "It wasn't easy to raise three kids as a full-time working mother, even with nannies. No matter how busy I was, I had breakfast with my children every day. I sat with them at dinner every night and helped them with their homework (I loved algebra) before going out in a Versace gown to a charity event. The kids and I celebrated, travelled, and grieved together. Our bond was, and is, our most valuable possession."

Reflecting on the impact of the public divorce on her kids, Ivana said to PEOPLE that it was a learning curve for the whole family.

"If you're a child growing up in school and your parents are on the cover of the newspaper every day for months with their divorce, it's a tough thing. But even with that, children are really strong, and I learned that through that whole process."

In 2008, Ivana married for the fourth and last time. She had been dating Italian actor Rossano Rubicondi for six years prior to their wedding in Florida, with a 23-year age gap between them. Ahead of the wedding, Rubicondi told the press that he was excited to finally make things official with Ivana.

"It does not bother me that she is older. She is an amazing woman, the whole package for me. She is an athlete, smart, sexy, funny and an astute businesswoman. We have a great time together."

But the relationship was tumultuous, the couple divorcing less than a year later. Multiple media outlets reported that Ivana's three adult children did not get on with Rubicondi. Though the marriage didn't last, the pair continued to date on and off until 2019.

Rubicondi died in late 2021 at age 49, from complications related to melanoma. While Rubicondi was ill for the last year of his life, it was Ivana who looked after him. His parents later said they gave Ivana half of Rubicondi's ashes when he passed.

She died as a result of an accident after suffering blunt trauma injuries to her torso, the New York City Office of the Chief Medical Examiner said.

Ivana was found lying at the bottom of the stairs inside her apartment. She was unconscious after police received an emergency call at 12:40 pm, and was pronounced dead at the scene. 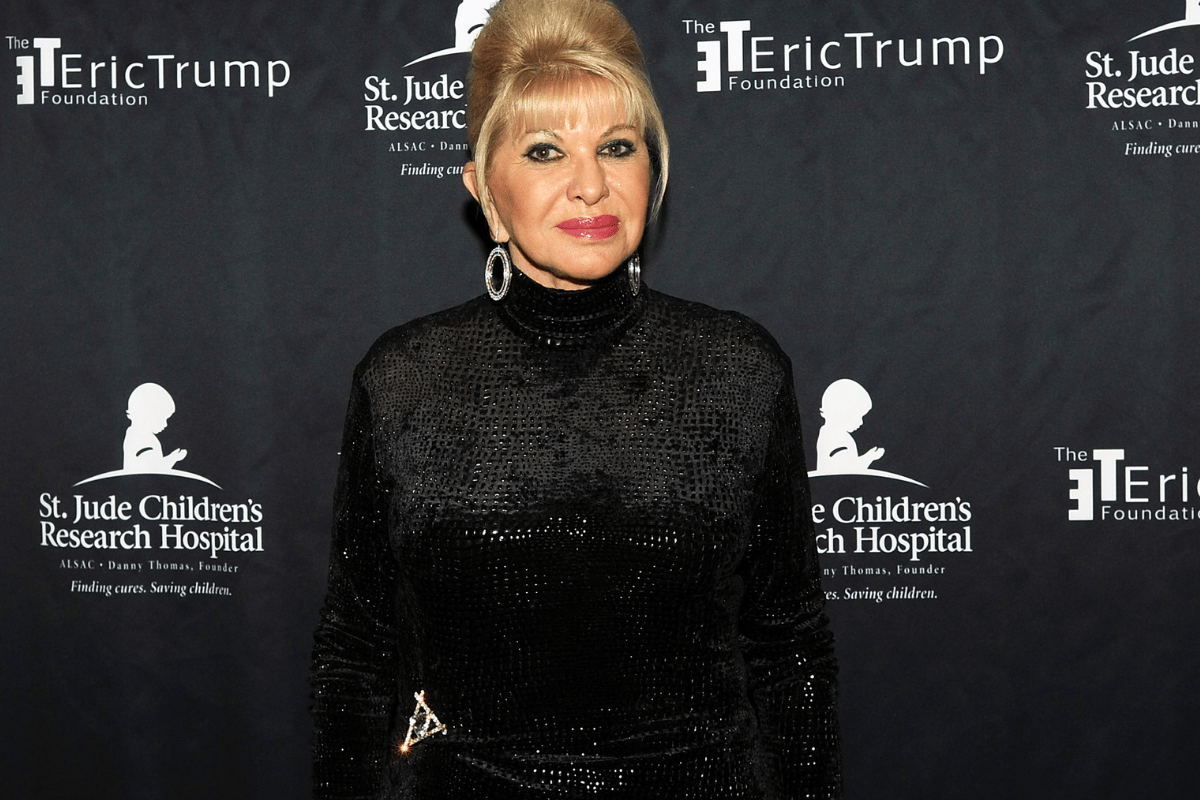 Two of her children, Donald Jr and Ivanka, as well as Donald Trump, were due to appear in the coming days for questioning in the New York Attorney-General's civil investigation into the family's business practices.

But the Attorney-General's office agreed to postpone the depositions in the wake of Ivana's death.

"Ivana was a wonderful, beautiful, and amazing woman, who led a great inspirational life," Donald said in a statement. "Her pride and joy were her three children. She was so proud of them, as we were all so proud of her. Rest in Peace, Ivana!"

"Heartbroken by the passing of my mother," daughter Ivanka wrote. "Mum was brilliant, charming, passionate and wickedly funny. She modelled strength, tenacity and determination in her every action. She lived life to the fullest - never forgoing an opportunity to laugh and dance."