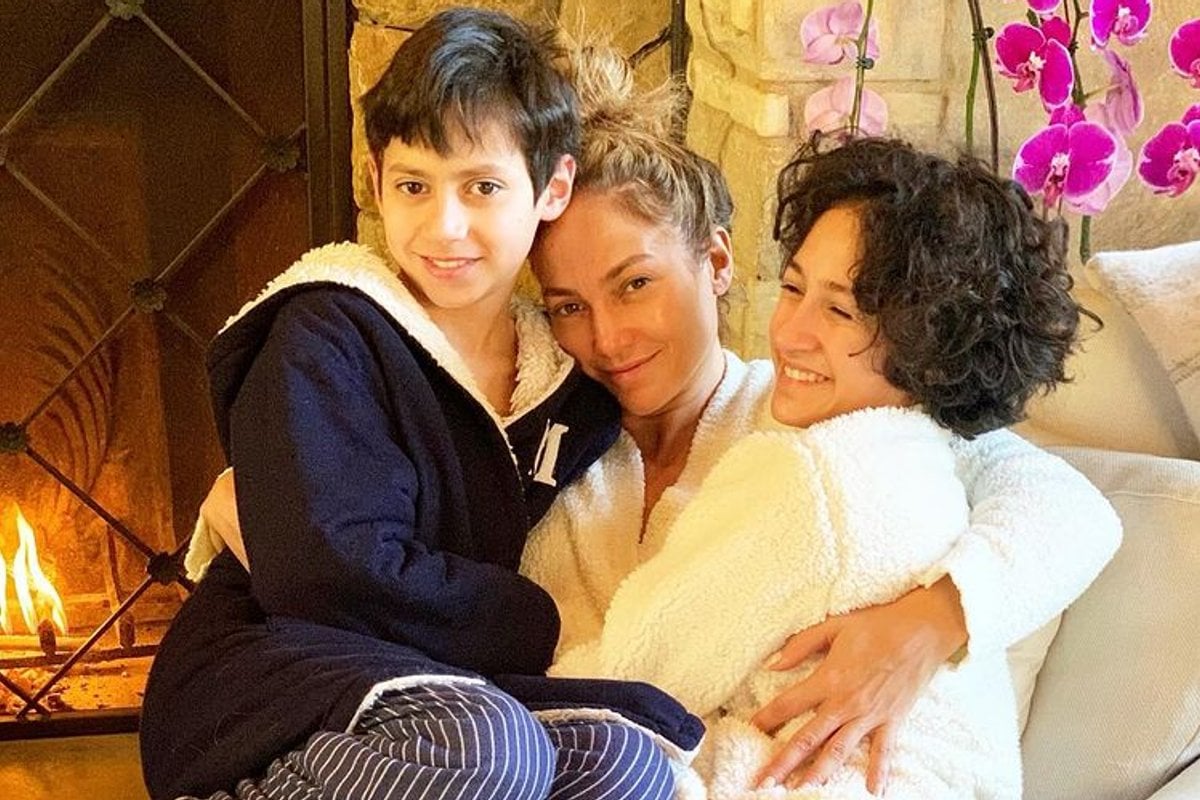 At a gala for the LA Dodgers Foundation this week, Jennifer Lopez introduced her 14-year-old twin, Emme Muniz, with gender neutral pronouns for the very first time.

Lopez referred to Emme as her 'favourite duet partner' and joked about how difficult it is to get the teen to perform with her.

"The last time we performed together was in a big stadium like this and I ask them to sing with me all the time, and they won’t," the superstar told the huge crowd.

"So this is a very special occasion. They are very, very busy. Booked. And pricey. They cost me when they come out. But they’re worth every single penny because they’re my favourite duet partner of all time. So if you will indulge me."

Lopez shared some photos of the duet to Twitter, showing Emme in a bright pink matching short set.

They performed a cover of Christina Perri's 'A Thousand Years' as well as a section of 'Let's Get Loud' and Bruce Springsteen's 'Born in the USA'.

The pair performed together previously at the Super Bowl in 2020.

While twin brother Maximiian Muniz or Max has not duetted with his mum on stage yet, Lopez shared a 'proud mama' moment in early 2020, when Max played a munchkin in his school production of The Wizard of Oz.

When the twins turned 14 on February 2, 2022, Lopez also shared a home video of them at various ages and stages, dedicated to the two 'lights of her life'.

"My babies, my sunshine, my loves. Happiest of birthdays to my two coconuts #MaxAndLulu," she wrote on Instagram.

"You have taught me the true meaning of life and have changed me forever in the most amazing way... I am so grateful to you both! Max and Lulu, I will love you forever and ever and ever."

Born in 2008, Lopez co-parents Max and Emme with her former husband and fellow recording artist Marc Anthony, who she married in 2004 and divorced 10 years later.

In a 2008 interview for Elle Magazine when the twins were just six months old, Lopez explained how she didn't panic when she didn't fall pregnant right away.

"We knew nothing was wrong with either one of us – I had been checked, and he had kids already," she told Elle.

"I knew [that] something's not ready here, in my head or in my life, and when it is, I know it's going to happen."

She had a suspicion she was pregnant after feeling a strange physical sensation that hinted at early symptoms.

"I was sitting down doing hair and makeup and I felt a flutter. The weirdest little... flourish. My makeup artist said, 'What's the matter?' I didn't say anything, but in my head, I was like, 'I have life inside me!'"

While pregnant, Lopez told Elle Magazine she really just wanted to enjoy every minute and enjoy being 'a little bit selfish'.

"I don't know if I’m going to have kids again, so I want it to be a beautiful experience. I don’t want to have any drama. I want to just be smiling every day."

Over the years, she has shown what a close connection she has with her kids, even letting them interview her for her YouTube channel in 2019.

"I wanted to jump out of the window so many different times because when one of you cried, the other one cried, and I was like, 'Argh, what do I do? You can't cry when he cries!'"

Apart from the challenges of parenting, she tells them about the true love she feels for them both.

"You cannot imagine what it's like to be a mum until you are a mum," she told Max, after he asked her about motherhood.

"You realise that the love you have for your kids is so deep that all the normal rules for other people don't apply."

In 2020, and after a few months into pandemic life, Lopez gave an interview to WSJ Magazine, sharing how she enjoyed being home and having dinner with the kids every night.

"The kids kind of expressed to me the parts that they were fine with about our lives and the parts they weren't fine with," she said.

"You thought you were doing okay, but you're rushing around and you're working and they're going to school and we're all on our devices."

She said the time at home made her realise that her twins still need her.

"We have to slow down and we have to connect more. And, you know, I don't want to miss things."

During an appearance on Live with Kelly and Ryan earlier this year, Lopez told the duo that her now 14-year-old teens are 'little adults'.

"They have their own lives. They have all their own ideas about the world already and they love to kind of show you that they know things. I feel like I learn so much from them.

"They keep me so abreast with the world and what's happening now and how kids are thinking. It's a whole different thing. It's a different world and there's a lot going on with them."

While the divorce with Marc Anthony was finalised in 2014, the pair appear to have a good co-parenting relationship.

Over the years, Lopez has been in a number of high-profile relationships.

In 2002, she began dating actor Ben Affleck before getting engaged. The couple were due to get married in September 2003, but postponed the wedding because of intense media scrutiny.

They officially split up in January 2004 with rumours that pressure from the media caused friction in the relationship.

After her 2011 separation from Marc Anthony, Lopez began an on-again, off-again relationship with dancer Casper Smart before falling for former New York Yankees baseball legend Alex Rodriguez in 2017. The power couple were engaged in 2019 but parted ways   in April 2021 after posting that they were 'working through some things'.

In mid-2021 rumours began swirling about her friendship with previous fiancee Affleck. News of their rekindled love began shortly after he praised Lopez for her tireless work ethic and talent in May 2021 for InStyle Magazine. They went Instagram official in July 2021.

Now engaged to Affleck for the second time, Lopez includes his three children with Jennifer Garner - Seraphina, Samuel and Violet - as part of her family.

Lopez spoke to People in February 2022 about being back together with Affleck.

"I feel so lucky and happy and proud to be with him. It's a beautiful love story that we got a second chance."

With their wedding expected later this year, she recently shared a tribute to him in her newsletter for Father's Day, sharing that they are as dedicated to their families and to each other as possible.

"Nothing is more fulfilling to me than being able to build a family with someone who I love deeply," she wrote.