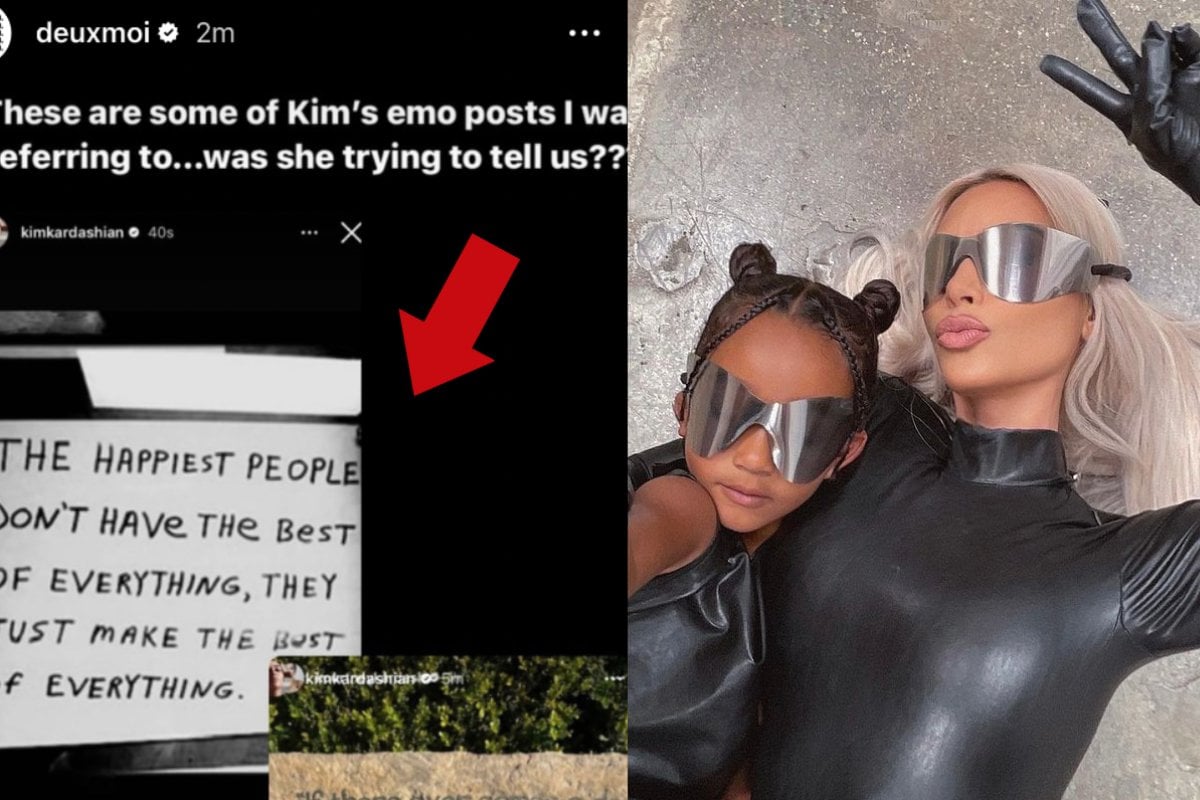 Kim Kardashian and Pete Davidson are over.

The reality TV star, 41, and comedian, 28, broke up and decided they're better off as friends, a source close to the couple told E! News.

According to the source, Kardashian and Davidson have "a lot of love and respect for each other," but they found that the long distance and their demanding schedules "made it really difficult to maintain a relationship".

Davidson is currently in Cairns, Australia, working on the movie Wizards! with Orlando Bloom, while Kardashian is in LA - working and raising her four kids - North, Psalm, Chicago and Saint, with her ex, Kanye West.

"The divorce is moving ahead with Kanye," another source told the publication. "They are happily co-parenting."

As for Davidson and Kardashian, there was a bit of surprise surrounding the news of their breakup - but according to insiders, there had been plenty of signs along the way.

But first, here's a quick bit of background on their relationship.

Davidson and Kardashian were first romantically linked in October 2021.

They were seen out together at a Californian theme park, holding hands on a rollercoaster with Kourtney Kardashian and her then-fiancé Travis Barker.

At the time a source 'close to the family' said to PEOPLE: "They hang in the same circles so they will be together from time to time. It's just friends hanging out."

However, just a short time before, Kardashian and Davidson had performed together during her SNL hosting debut, sharing a kiss during one of her sketches.

By late November, the couple confirmed their relationship, and in April, they made things Instagram official.

In May 2022, the couple attended the White House Correspondents Dinner and Met Gala together. Speaking to Ellen, Kardashian said they had taken things to the next level, with Davidson deciding to get a branding of his new girlfriend's name on his chest. Along with that, he got a tattoo which says, "My girl is a lawyer".

She also told ABC: "I am a relationship kind of girl, for sure, and I wouldn't be with someone if I didn't plan on spending a lot of my time with them. Obviously, I want to take my time, but I'm very happy and very content. And it's such a good feeling just to be at peace."

As of yet, neither Davidson nor Kardashian's rep have commented on the split. But in the days since the news broke, there have definitely been some new developments.

According to famed gossip Instagram page Deuxmoi, Kardashian's recent Instagram activity provided a few hints things weren't great in her life recently. Not to mention the fact that Kardashian posted a series of photos with her and North West wearing the new Yeezy collection this week. And when you take into account the public drama between Davidson and Kanye, it's an interesting move.

"These are some of Kim's emo posts I was referring to… was she trying to tell us?" Deuxmoi wrote on their Instagram stories. The quotes that Kardashian re-shared on her socials included:

'If there ever comes a day when we can't be together, keep me in your heart. I'll stay there forever.'

Take from that what you will...

The next piece of information includes additional reports from Deuxmoi which are yet to be verified - so keep that in mind. Someone reached out to Deuxmoi saying they had connections with the producers of The Kardashians, sharing insider gossip.

"She shared that Kardashian producers are scrambling to keep the Kim and Pete romance alive until season two is finished airing."

It was alleged that producers didn't have enough relationship content between Kardashian and Davidson to use for their upcoming season, so Kardashian made the recent trip to Australia to visit him. But according to the insider, this trip wasn't for the purposes of their relationship - it was purely to get content - something Davidson was allegedly
"annoyed" with.

"[The trip] was assumed to reignite their feelings and get some sexy moments between the two but it was obvious to everyone there's only tension."

Next on the agenda is Davidson's t-shirt. Stick with us.

According to E! News' Ashley Joy Parker, Davidson was spotted over the weekend - in Cairns - wearing a graphic t-shirt with a message. And it was the t-shirt's message that has raised a few eyebrows.

"What ... I feel like shit," his shirt apparently read.

It's the first time Davidson was photographed since he and Kardashian broke up.

Ultimately, most outlets have reported the reason behind the breakup was quite simple - they just weren't suited to one another long term.

Listen to Mamamia's The Spill podcast unpack this Kardashian and Davidson news. Post continues after audio.

"Pete is 28 and Kim is 41 - they are just in very different places at the moment," one insider told Page Six.

"Pete is totally spontaneous and impulsive and wants her to fly to New York, or wherever he is on a moment's notice. But Kim has four kids, and it isn't that easy. She needs to focus on the kids."

The source also said Kardashian was feeling "totally exhausted by this relationship and other things going on in her life".

Recently, Davidson appeared on the Hart to Heart podcast, where he said that his "dream" is to become a dad one day.

"[I'm] definitely a family guy. My favourite thing ever, which I've yet to achieve, is I want to have a kid," he said.

As for whether Kardashian herself was keen on having more kids, it remains unclear. But we'll have to wait for the next season of The Kardashians to get the full rundown on Davidson and Kardashian's relationship. So stay tuned!

Reply
Upvote
2 upvotes
Well, I don't think this will come as a surprise to anyone. Seems like they had fun together though, sometimes relationships don't need to last forever.
M
mamamia-user-482898552 7 days ago

Reply
Upvote
So they decided to not renew the contract.
S
simple simon 6 days ago