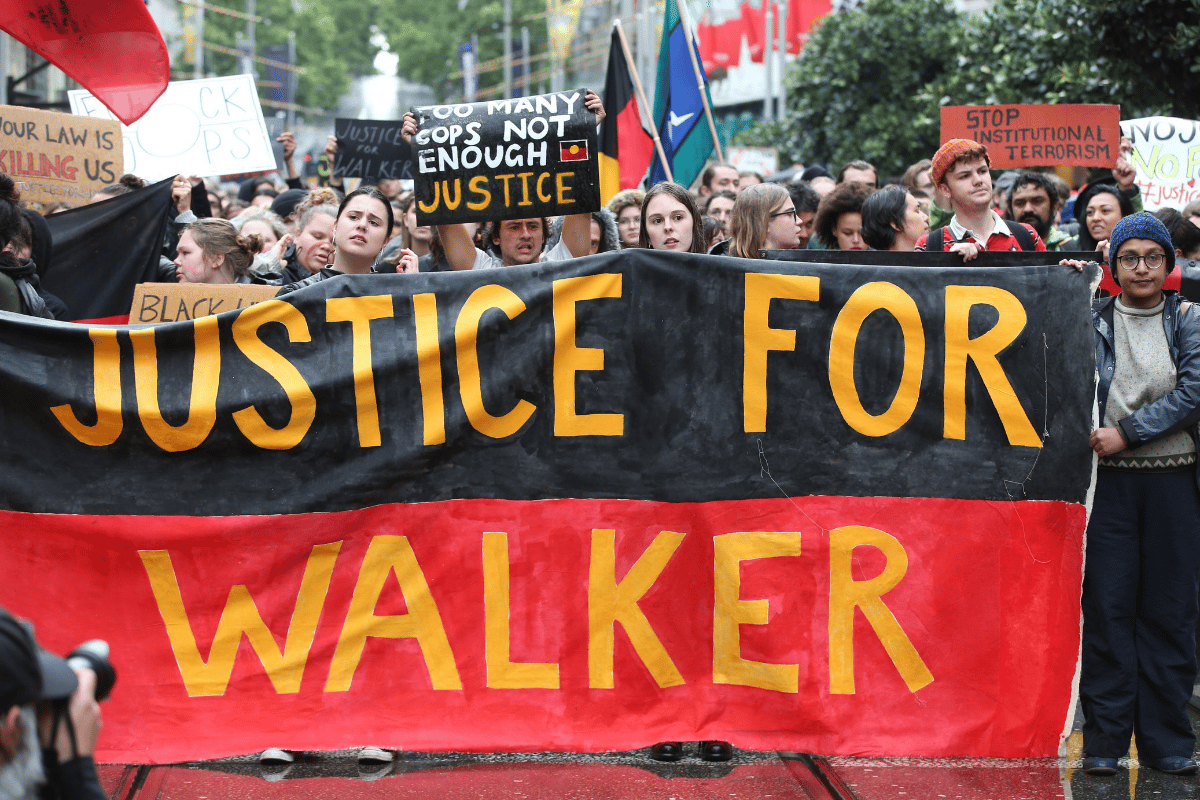 WARNING: Aboriginal and Torres Strait Islander readers are advised that the following article contains names and descriptions of people who have died.

19-year-old Walker died after being shot three times during the attempted arrest, and it's those subsequent second and third shots that saw Rolfe arrested for alleged murder.

More than two years on, a trial has commenced in Darwin, Northern Territory, after lengthy delays due to COVID.

The case is being heavily scrutinised because of the disproportional number of Aboriginal Australians who die while in police custody.

There have been close to 500 fatalities recorded since a 1991 royal commission into preventing Indigenous deaths in custody. And as The Guardian reports First Nations people are six times more likely to die in custody than non-Indigenous people.

The night in question.

Even though some reports suggest police came to Walker's house to resolve a dispute or because police had been called to deal with an emergency, community members stress police "were there to arrest this teenager for breaching parole".

The conviction in question was a suspended sentence for break and enter.

This week, the jury of the murder trial were told that Walker planned to hand himself into police the day after Rolfe allegedly murdered him.

"I asked Kumanjayi if he can come to the police station and give himself in. He nodded his head and said: 'Yep'."

Robertson said he had spoken to the officer-in-charge at the Yuendumu police station, Sergeant Julie Frost, about Walker's plan. The pair had then agreed Walker would be taken into custody after his family member's funeral which was initially planned for November 8 but moved to November 9.

Police however escalated the order to arrest Walker, after he allegedly threatened two other policemen on November 6. Those officers had been trying to execute an arrest warrant, issued after the teenager had escaped from an alcohol rehab facility to attend the funeral.

So on November 9, when a group of Immediate Response Team officers arrived - allegedly with military-style assault weapons - in the remote Aboriginal community to arrest Walker, there are reports Walker lunged at Constable Zachary Rolfe with a pair of scissors.

Walker's grandmother told the court: "He said he was protecting himself from police".

It is then that Rolfe fired his gun once at Walker, and while Walker was laying on the ground after sustaining a bullet wound, Rolfe shot him two more times.

Rolfe has pleaded not guilty to murder and the alternative charges of manslaughter and engaging in a violent act causing death. He claims he was doing his job in "good faith" and defending himself and a colleague against "a violent criminal".

In court and noted on NITV's The Point, it was revealed Rolfe had limited experience working in remote Indigenous communities. Prosecutors have conceded the first shot, which was fired while Walker was standing and resisting arrest, was justified. But they say the fatal second and third shots when Walker was laying on the ground went "too far". The Crown says Rolfe's action to fire his weapon two additional times was not legally justified because Walker was "effectively restrained".

Walker was pronounced dead at 9:28pm. His family were not informed for more than 10 hours.

A long wait for answers.

Sharing their story via Instagram page @justiceforwalker_, loved ones said:

"On the night of the shooting, his family and friends gathered outside the Yuendumu police station begging for answers. However, they did not get any, even after more than four hours of patiently waiting. Family were not informed of his health or circumstances even after pleading for updates."

In Yuendumu, there were no medical staff in the area at the time. A plane did arrive from Alice Springs that night, Walker's family assuming it was to transport the 19-year-old to receive medical assistance. The following morning, however, they were informed that Walker had not been taken to Alice Springs. He had died in Yuendumu.

"Warlpiri people are scared and upset and fearful. They are asking for an independent inquiry into the shooting and policing; they want to ensure that this never happens again," GoFundMe organiser Lisa Watts said.

Gamilaroi woman and activist Amanda Fotheringham previously wrote a piece for Mamamia that highlighted why many First Nations people have very little trust for law enforcement.

"As an Aboriginal woman, I have been conditioned to fear the police… not to feel as though they are the people who are supposed to protect me should I need it," she wrote.

"I know in my family that the police played a role stealing my mother and her siblings as part of the Stolen Generations. There have also been over 437 Aboriginal deaths in custody. That number builds no confidence in Aboriginal people feeling safe should they end up being arrested… more often than not for petty crimes (or things that aren't crimes at all)."

"Rather than immediately stereotyping us, treating us as criminals… stop. Talk to us. We're already scared. We know the power you have and it is intimidating," she continued.

For years, Walker's family and the Indigenous community have been calling for justice, and on February 7, the trial at the Supreme Court in Darwin officially commenced after several delays.

The jury has been shown graphic body cam footage which paints a picture of what happened on November 9, 2019. The court has heard the second shot was fired 2.6 seconds after the first, and there were 0.53 seconds between the second and third shots.

A spokesperson on behalf of the family and representative of the Warlpiri community, Ned Jampijinpa Hargraves, said to reporters outside the court, "the ancestors, the spirit is with us today guarding us and keeping us safe. We are still hurting every day. I am proud of my community because we are standing today and we want to see justice."

In a statement published on @justiceforwalker_, Warlpiri Elder Lindsay Williams said it was a challenging time for the community.

"We have waited two years for this trial to take place. That means we are still grieving the loss of our loved one, Kumanjayi Walker, who was taken away from us. We have travelled a long way, we want justice. We send love to our desert people: stay strong."

The trial is expected to continue for the next three weeks.

If you would like to help Kumanjayi Walker's family and the community at this time, you can provide your support via their GoFundMe page.