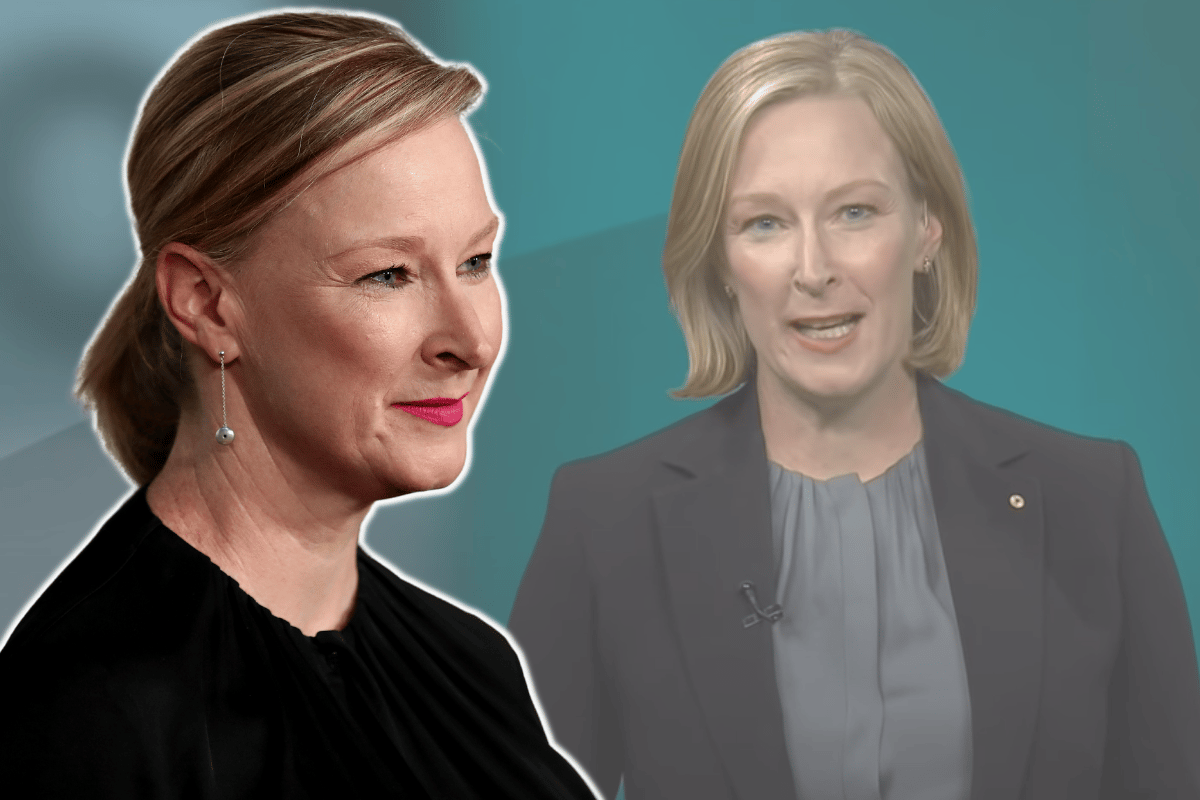 When Leigh Sales announced she was leaving ABC's 7.30 report, her phone lit up with messages.

"My text messages were full of people saying 'oh my God, wow, that's huge'," the journalist told Mia Freedman in the latest episode of the No Filter podcast.

But there was one message that stood out from the others.

It was from Hamish Blake.

"Hamish Blake sent me this really interesting and lovely text message. He said, 'People often have a really hard time understanding when somebody's choosing to leave a great job at the top of their game... they assume that there must be a secret reason.'"

However, the comedian and Logie winner said he feels excited for people in Sales' position, as they have "taken control" of their own situation.

"They've made an empowered decision," he continued. "And now, there are fresh fields ahead and something to do."

And that's exactly how Sales feels.

Watch: Leigh Sales announces she is stepping down from anchoring the 7.30 report. Post continues below.

The 49-year-old author and journalist, who has forged a formidable career asking the tough questions, announced she was stepping down from the top job in February this year.

For Sales, there was no "secret" motive behind her decision to resign. No new job lined up. No hand pushing her out the door.

"I want to have a break," she told Mia Freedman.

"I want to have a rest and see what brews up."

But as she points out, "people have a hard time believing that".

"A lot of people have been casting around looking for the real reason, because who could possibly give up this job in the position she's in now?"

In reality, Sales says now is a "great moment" to leave.

She's just come to the close of yet another election cycle and has spent the last 12 years on our TV screens, in a job she only saw herself doing for 10.

During that time, she's proven herself the most acclaimed political interviewer in the country, praised for grilling Prime Minister Scott Morrison over the years and executing a candid interview with Prime Minister Malcolm Turnbull in 2020.

Outside of politics, she's been trusted to tell the stories of people from all works of life, including everyday Aussies, to his Holiness the 14th Dalai Lama and Paul McCartney.

"I never have wanted to be somebody who waits until they're kind of stale and people want them to go. I wanted to go when I felt like I was at a really good position," said Sales.

But despite being up front about her intentions to leave, the rumours have kept on coming.

"I keep reading this erroneous speculation about what I'm going to do, [like how] I'm going to do a talk show... [But] there's been no discussion about it," she explained.

There's also the running theory that Sales is leaving because of Twitter trolling; something she’s unfortunately been subject to as a woman in the media landscape.

"Journalists are on Twitter all the time, and they would see the level of abuse that I get and think 'oh [she must be leaving] because she's getting abused'."

But in reality, the mother-of-two says trolls "don't have any bearing" on her life.

"I care about the opinions of people who matter to me and who are important."

"So for example, my boys' father is really good at chipping in and doing what's needed to help care for the boys or suddenly being called on to have to change his plans because a major story is broken and I have to go to work."

Listen to Leigh Sales' full interview with Mia Freedman on the No Filter podcast. Post continues below.

While Sales has proven women can have high-paying job and a family, she says she is looking forward to having time for herself after leaving 7.30.

"I wake up in the morning and I immediately have to check what's in the news, because the mornings is when you set up the day."

From 6:30 she's reading through newspapers and making calls while looking after her kids.

After an editorial conference call with her team at 9am to talk about what they are covering in the show, she gets to enjoy a slither of quiet time for herself before 11am.

Then it's more work until around 4pm when she's in the make-up chair for a 5:15pm interview.

"Once I've done that interview, then I have a look at the leads for the other stories... or we talk about any other issues and we might have a quick chat about what's coming up tomorrow. And then you do the show live and then off you go."

Of course, she's also at the whim of the live news cycle, which could upend her plans for the show at a moment's notice.

"It's a rolling, moveable, feast basically."

Sales also has to deal with other pressures that come with live TV, such as feeling unwell when you're on air.

Recalling an incident from years ago, Sales told Freedman she once felt sick during a live interview with our now-Foreign Affairs minister, Penny Wong. At the time, no one knew she was pregnant with her second son.

"I had to do the interview with a bucket in the studio next to me because I felt like I was going to be sick," she explained.

Fortunately, Sales didn't throw up on air but Wong did ring her afterwards to confess that she knew she was pregnant again.

"The perils of live television," she joked.

It's these stories - and that of other Australians she interviewed - that Sales will walk away with after she presents her last show at 7.30 on Thursday.

There are also a number of lessons she's learnt throughout her time on the job.

"There's a lot of truisms that actually aren't true," she explained. "For example, 'hard work pays off.' There's many examples in life where people have worked incredibly hard, and just because of luck, or happenstance or wrong timing, the hard work hasn't paid off."

Another lesson she's learnt is that people will often feel uncomfortable when they push themselves to their limits.

"Many times in my job I feel uncomfortable, like anxious, scared [and] fearful, because I'm operating right at the limits of what I'm capable of doing."

"And so I think you have to be prepared to embrace that and understand that this is going to come with feeling uncomfortable but the feeling at the other side... is great. It's partly relief... and also that sense of accomplishment."