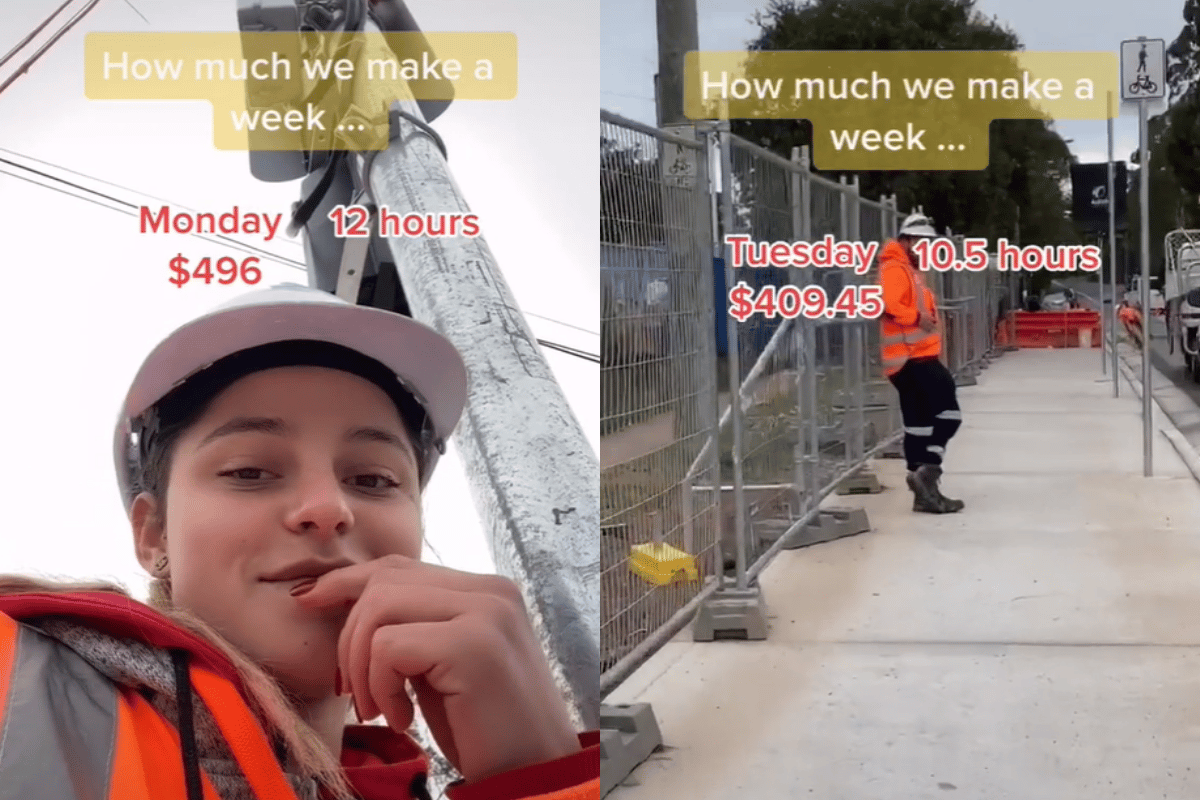 The TikTok user recently shared a video explaining how much she makes a day working as a traffic controller in Sydney. Within a six-day week, Chloe, who's been in this role for over a year, earned herself a whopping $2,949 for 58 hours of work.

Watch: 4 money hacks that don't cut out your daily cup of coffee! Post continues below.

After sharing the video on TikTok, with the caption "we need a pay rise", Chloe received some mixed responses.

"Over paid for doing nothing," one person commented. "Your take home pay on an average day is my whole week... and a lot of people make way less. I’m not against you getting a pay rise, but perspective," said another.

Speaking to Mamamia, Chloe said she knew she'd receive interesting comments thanks to her "controversial" caption but was glad to see others come to her support.

"Traffic control ain’t no easy job. Standing in sun and rain all day ain’t easy. Plus, trying to deal with traffic is hectic," one person commented.

"As good as the pay is, I couldn’t stand there for 12 hours a day doing nothing, that’s a hard job in my books," said another.

Chloe also explained that the TikTok video showed how much she earns during a particularly busy week of work and that she's not always rostered on for the same amount of hours.

"Traffic controlling has positive and negative aspects just like any other job and it can be hard to get rostered on for that many hours every week," she explained.

"The TikTok highlighted one of my busiest weeks as not every week is the same and compared to other weeks where I’ve only had one shift due to weather."

Chloe first got into into traffic controlling to earn money while she was studying at university.

"I thought it would be a good way to both study and make money at the same time as the hours were so flexible and I had heard that it could pay really good."

But despite the earnings, she wouldn't stay in the job forever as there are certain risks that come with working on the road.

"I definitely wouldn’t recommend it as a lifetime career as it can be a dangerous and boring job."

Tahera Raedd is another TikTok user sharing her experience of working as a traffic controller in Sydney. 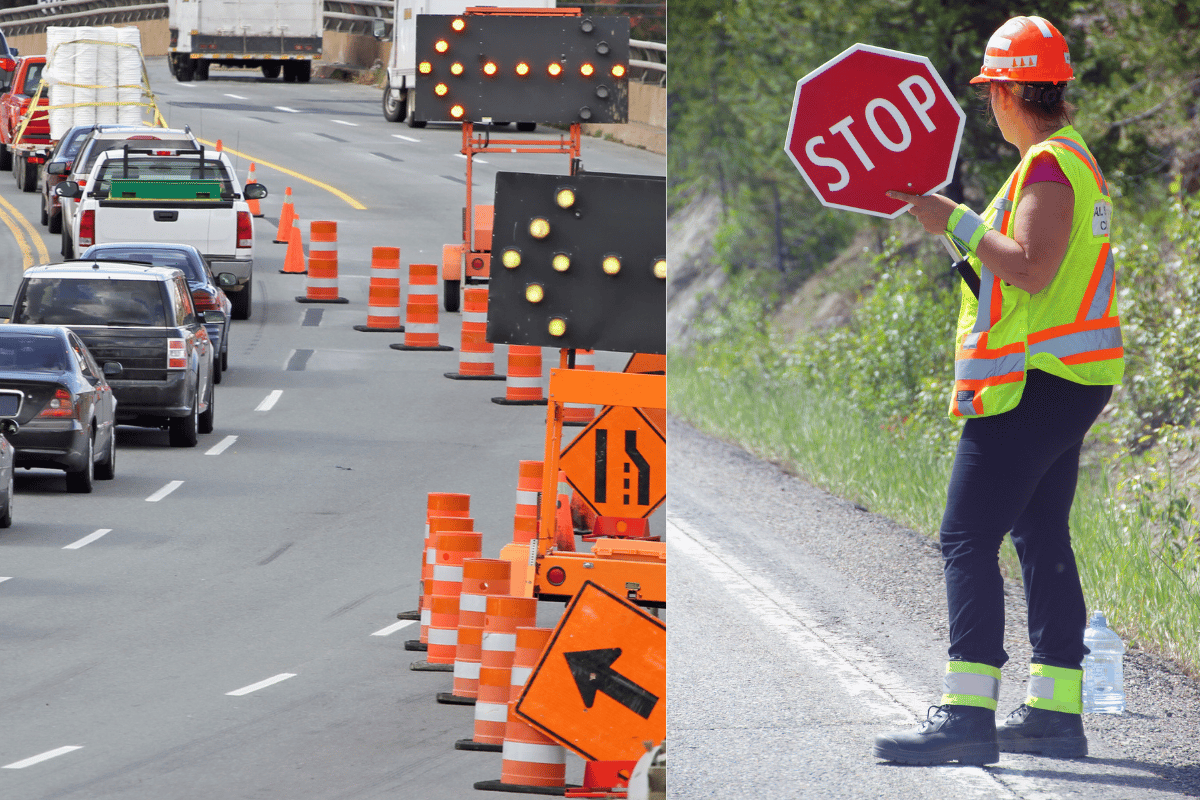 Some in the industry have warned that the job isn't all perfect and lots of money. Maria Kefalas is a traffic controller as well and she has said it's important for people to have a more realistic expectation.

"I've seen lots of TikToks in regards to traffic control and they tell you how much money they make and how many hours they work. What they don't tell you is the weather. Also, it's got to be the most inconsistent job I've ever done in my life. We all have good weeks and then no work for three weeks or a whole month," she said.

"If you want to do it and you're fine with inconsistency, do it. But if you want something consistent and you think you're going to be working Monday to Friday and earning over $2000 - think again. Also try and get into a union company."

Listen to Mamamia's What The Finance: Side hustles and pay rises, how to do it well. Post continues after audio.

As for unions, The Australian Workers' Union (AWU) recently campaigned for traffic controllers to receive better pay, when considering the hours they do and the irregular shift patterns.

"It's a huge win, one that's five years in the making," AWU National Secretary Dan Walton said in a statement.

"The bosses didn't want to pay overtime rates to their workers, by wrongly claiming the workers are shift workers. In what is a hugely casualised workforce, companies have been short-changing their casual workers by treating them as if they were on a regular timetable. If you work irregular, unsociable hours overnight, employers should pay you night rates."

F
fightofyourlife a year ago

Reply
Upvote
1 upvotes
It seems like Chloe is being more than fairly compensated for this job. There are jobs that are much more difficult (physically, mentally or both) that are not paid nearly so well.
L
laura__palmer a year ago

Reply
Upvote
3 upvotes
This job is very well paid. The penalty rates are very good. I do not see why there should be a pay rise for this job, especially seeing that people working in hospo who are also on their feet for long hours and subject to changing rosters do not get near the same rates. It also requires a minimal amount of training, like a couple of days at most.
C
cat a year ago

Reply
Upvote
@laura__palmer its paid better than hospo because of the risk involved- you have to stand in front of vehicles & that only needs to go wrong once for a really bad outcome. And they can be liable if theres an accident.

We should pay hospo workers better than we do currently though.
L
laura__palmer a year ago

Reply
Upvote
@cat I understand why it is better paid than hospo workers, but I think it's pretty well paid already based on the conditions and training needed to do the job.  What I was saying if this job needs a pay rise, then so do hospo workers, which also has it's own dangers and, in many cases, requires much more training.
C
cat a year ago