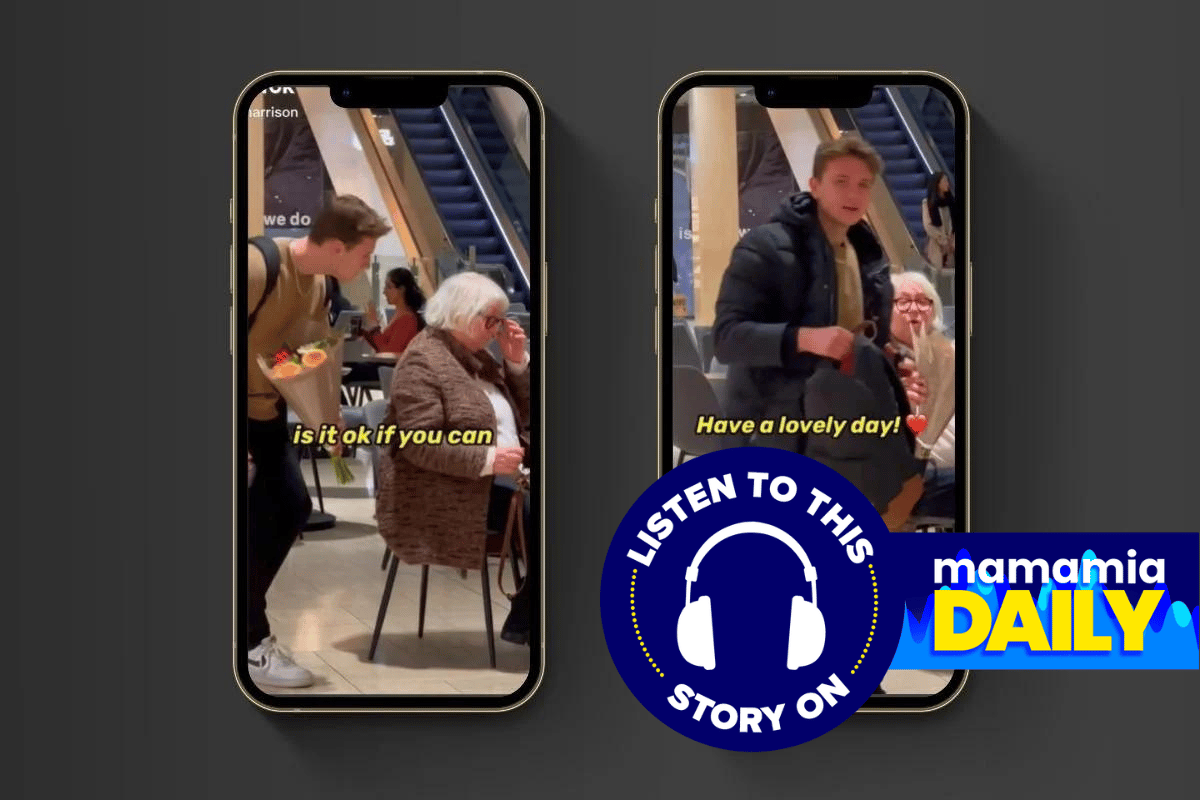 Listen to this story being read by Gemma Bath here.

Last month, a video filmed in a Melbourne shopping centre food court was uploaded to TikTok.

A young man walks up to an older woman minding her own business over a cup of coffee, and asks her to hold a bunch of flowers for him while he rummages around in his backpack.

He pulls out his jacket, zips up his bag and then tells her "have a lovely day," before walking away.

The camera zooms in, and the emotional Sam Smith song playing over the top hits a crescendo as the woman realises they were meant for her.

"Me crying with her," one reads.

"She needed those flowers," says another.

Watch: the video. (Note Mamamia has decided to include the video for context.)

These videos usually feature younger creators (in this instance, 22-year-old Harrison) trying to cheer up or surprise older people. People who they deem - just by looking at them - might need some brightness in their day.

But as Maree pointed out in an interview with ABC Radio, she didn't want any of this; the flowers, the random act of kindness, or her face going viral on a social media platform she's not even a part of.

"He interrupted my quiet time, filmed and uploaded a video without my consent, turning it into something it wasn't, and I feel like he is making quite a lot of money through it.

"It's the patronising assumption that women, especially older women, will be thrilled by some random stranger giving them flowers," she said.

To be quite frank, Maree didn't want the flowers. She didn't want to take them on the tram home, and if the man had actually asked her if she'd wanted them instead of just leaving them with her, she would've politely declined.

Commenters on the video jumped to the conclusion that Maree was crying at the gesture. But she wasn't, that was just a reaction. One she didn't realise was being filmed.

They assumed that her day had been made. That it needed to be made by a young man she didn't know with a bunch of flowers. It didn't. She was perfectly happy.

As Maree told the ABC, she has found the whole ordeal - the TikTok, and the articles written off the back of it, calling her elderly and making note of the 'heartbreaking tale' - dehumanising.

"I feel like clickbait," she said. "These artificial things are not random acts of kindness... I think other women, especially older women, should be aware that if it can happen to me, it can happen to anybody."

I know a lot of women around me who watched this video and Maree's reaction and have felt incensed with anger.

So women of a certain age now have to worry about passersby taking pity on them? Assuming the worst of them and their lives based on, what, their age?

Of course, there are plenty of people I am sure who would've loved to recieve a bunch of flowers from Harrison on a random Tuesday.

But it's the assumption that sucks.

"I hope this made her day better," the video was captioned, as if by way of just existing Maree's day needed to be made better.

It's a dangerous slope TikTok is taking us down, one where younger creators assume that being old is inherently sad.

Because that's what this is really about.

If Harrison had given those flowers to a younger woman, would he have used that caption?

What about that sad, emotional music?

And she really didn't appreciate having to lug a bunch of flowers home she never wanted in the first place.

P
pippa a month ago

Reply
Upvote
1 upvotes
Okay, I’m at least as old as this woman and very probably older. I’m rarely able to go out for coffee, because I’m in a wheelchair now. I’m having so many difficulties with my health that if a random person wanted to give me flowers, I’d be thrilled! Under no circumstances would I see it as being patronising, because I’m a positive person who sees good, not bad.
I find it difficult to understand why everyone’s so prickly now and seemingly looking for opportunities to take offence. If they want to film it, I couldn’t care less. I wouldn’t be interested in watching it, but if that’s what people like to watch, good luck to them. People need to relax and stop getting their knickers in a twist over something that doesn’t affect them.
M
mamamia-user-482898552 a month ago

Reply
Upvote
2 upvotes
@pippa The woman who was filmed did not appreciate the gesture. Many in the same situation wouldn't either. Your own perspective does not invalidate that of others.
P
pippa a month ago

Reply
Upvote
@mamamia-user-482898552, and their perspective doesn’t invalidate mine. The fact that someone’s offended doesn’t make them right.
As we go through life, unpleasant experiences happen to all of us. We have a choice:  do we allow the actions of others to dictate our emotions? In my case, no. I’m in charge of my emotional well-being. Why would I let a thoughtless or nasty person dictate my feelings? The answer is, I wouldn’t.
In the case being written about, the action of the young man was to give the senior lady a bunch of flowers. She CHOSE to allow herself to become offended and to feel patronised. Why? Because in today’s world those feeling offence are pandered to. Those like me that smile and say thank you don’t get articles written about us in Mamamia or anywhere else. We don’t need to be validated by others.
The bottom line is that we always have a choice as to how we react to life’s unpleasant events. If we choose to adopt the negative response, we allow ourselves to become mired in that negativity. That’s not conducive to good mental health.
M
mamamia-user-482898552 a month ago

Reply
Upvote
2 upvotes
@pippa You're invalidating her experience by preaching about the way she should have felt about the situation, suggesting her reaction was "wrong" and presumably, that yours would have been "right" in the same situation. You might be content to let others treat you patronisingly in life and use you as a prop to their narcissism, but if others choose not to, that's their prerogative.
C
cat 25 days ago

Reply
Upvote
1 upvotes
@pippa you're basically trying to say that your reactions are the "right" ones and that everyone else is just negative. Thats called toxic positivity and its actually incredibly bad for the mental health of everyone around you. The old-fashioned term for it is "being judgemental".
Its good that you don't need to be validated by others because you will probably find a lot of people choose not to be around you.
M
myf a month ago