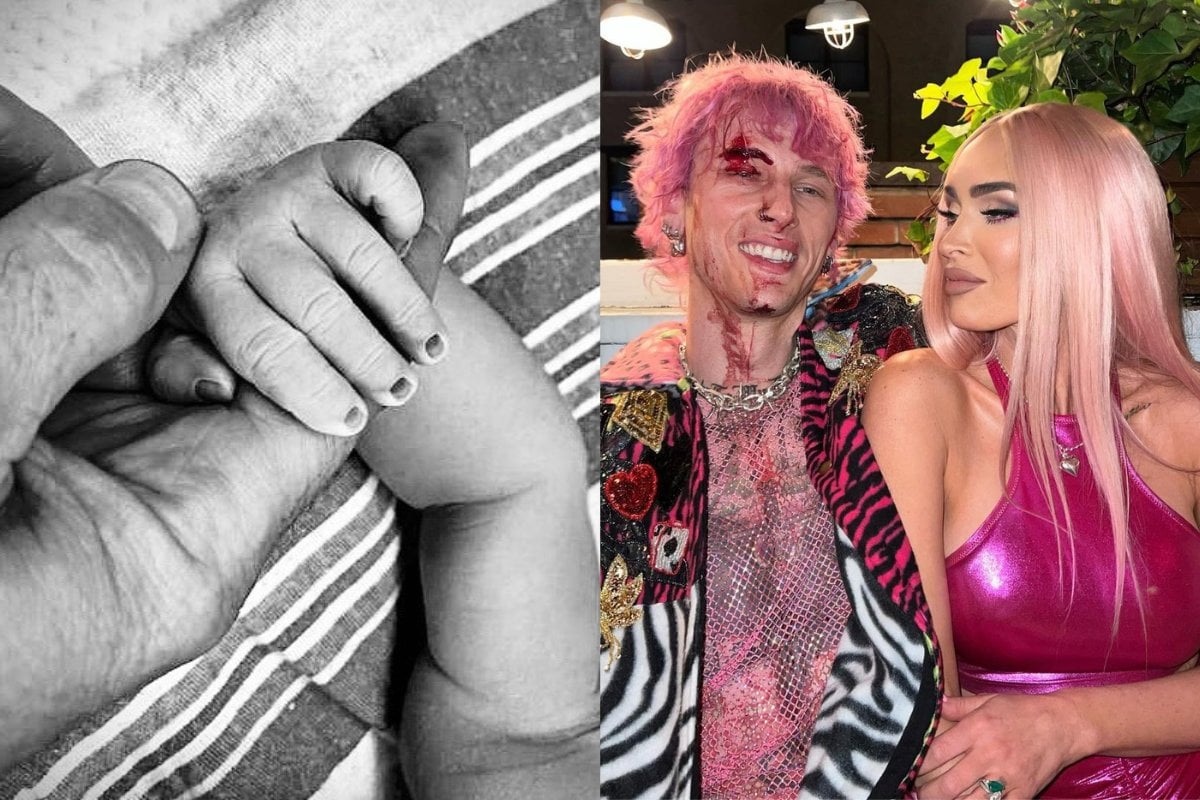 Megan Fox and Brian Austin Green are living quite different lives to what they probably envisioned for each other a few years back.

The former couple were together for 16 years and married for 10, but officially split (for the final time) in 2020.

Both actors have since moved on - Fox had a career resurgence and got engaged to Machine Gun Kelly, while Green fell in love with Australian dancer Sharna Burgess, who just gave birth to their first child.

Here's a look back at Megan Fox and Brian Austin Green's relationship, and what their lives look like now.

But first, watch the celebrity couples we completely forgot about. Post continues below.

Megan Fox and Brian Austin Green met on the set of sitcom Hope and Faith, when Fox was just 18 years old.

The then 30-year-old Green was a father to a two-year-old son, with his former Beverly Hills, 90210 cast mate, Vanessa Marcil.

Speaking to ELLE in 2009, Fox recounted her initial attraction to Green, saying, "I was like, 'Oh my God, I have to be with you. You’re not a threat, you’re not some d-bag that’s going to cause a lot of problems.'"

"I had to convince him that I was slightly more responsible and well-spoken and had other things to bring to the table besides being 18," she said.

The couple formed a relationship, and in 2007, after three years together, Green proposed. 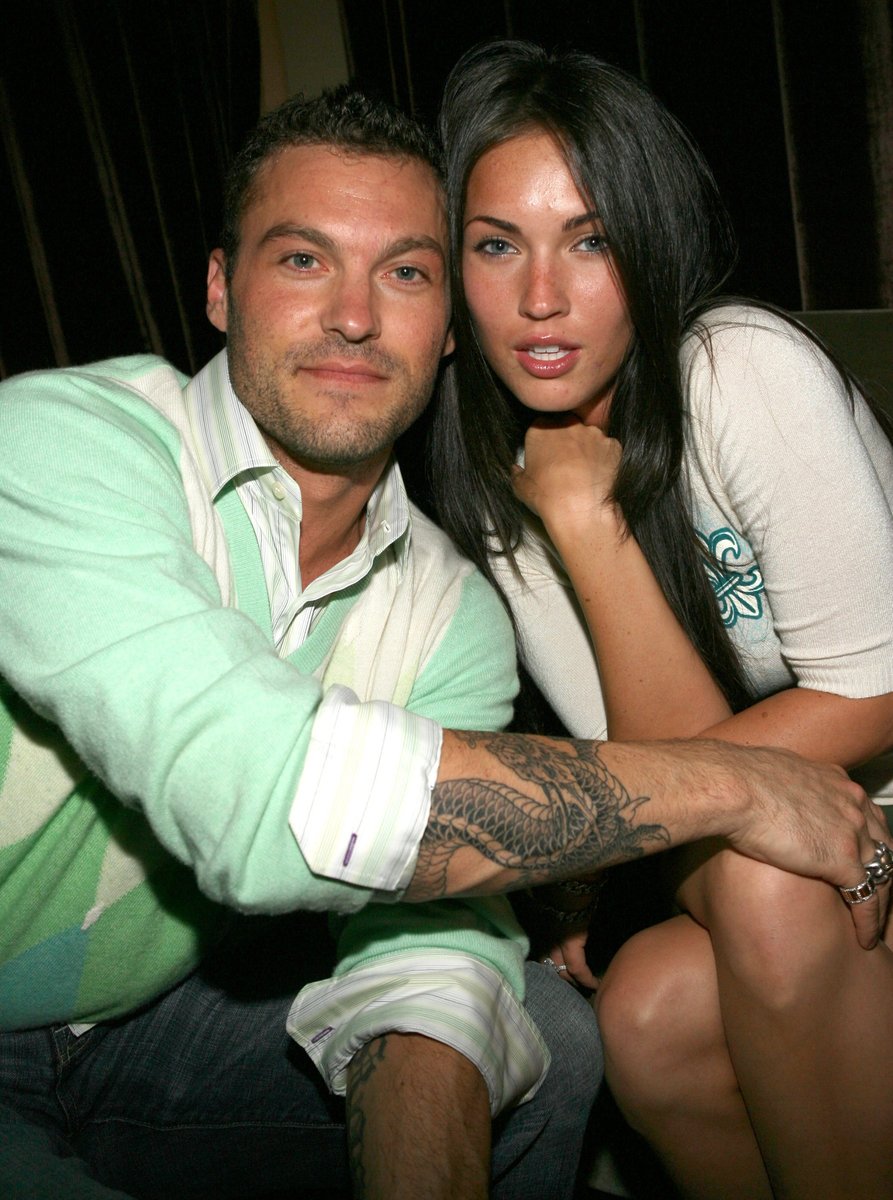 Will “Been Slapping People For A While” Smith

The couple called off their engagement in February 2009, before rekindling just a few months later. In June 2010, they married in Hawaii.

In September 2012, they welcomed their first son, Noah. And their second son, Bodhi, arrived in February 2014.

But less than a year later, in August 2015, Fox filed for divorce, citing irreconcilable differences.

The Transformers actress asked for joint custody of her two sons, and TMZ reported that the divorce was "amicable" and that she and Green were still living together.

In April 2016, Fox then surprised the world with the announcement that she was pregnant with her third baby. Because of their recent split, Fox joked about who was the father was.

“#Notthefather,” Fox wrote on Instagram, alongside a collage of photos of herself with her former costars Shia LaBeouf (Transformers), Will Arnett (Teenage Mutant Ninja Turtles) and Jake Johnson (New Girl).

She later confirmed the father was indeed Green.

In August 2019, Fox gave birth to the couple's third child, Journey, and filed to dismiss their divorce case.

But less than one year later, they broke up again.

During an episode of Green's podcast, the actor said the pair split in mid-2020 after a heartfelt conversation about the state of their marriage, after she had returned from filming the 2021 crime thriller Midnight In The Switchgrass, alongside Machine Gun Kelly.

"She said, 'I realised when I was out of the country working alone that I feel more like myself and I liked myself better during that experience and I think that might be something worth trying for me,'" he recalled Fox telling him at the time.

"I was shocked and I was upset about it, but I can’t be upset at her because she didn’t ask to feel that way. It wasn’t a choice she made, that’s the way she honestly felt. We talked about it a little more and said let’s separate for a bit… and so we did."

A source told People, however, that the pair struggled to get along while co-parenting.

"There’s no rule book to it," the actor said about raising their sons together on his podcast in August 2020.

"There’s no way of doing it right or doing it wrong. We are learning as we go. The important thing for us is just communicating as much as we can."

"Why does Journey have to be in this picture? It's not hard to crop them out. Or choose photos they aren't in. I had a great Halloween with them yesterday, and yet notice how absent they are from my social media. I know you love your kids," the actress commented on her estranged husband's post.

Fox continued: "But I don't know why you can't stop using them to posture via Instagram. You're so intoxicated with feeding the pervasive narrative that I'm an absent mother, and you are the perennial, eternally dedicated dad of the year.

"You have them half of the time. Congratulations, you truly are a remarkable human! Why do you need the internet to echo back to you what should be inexhaustibly evident in the way your children love you?"

Green then deleted the photo, and re-uploaded it with his son cropped out.

Not long after meeting on the set of Midnight In The Switchgrass, Megan Fox and Machine Gun Kelly started dating.

The day after Green announced he and Fox's split in May 2020, the actress appeared in the music video for Kelly's single 'Bloody Valentine' and kissed him.

In June, their relationship was official.

After a year of public outings, red carpet appearances and proclaiming their love for one another, Kelly proposed to Fox on January 11, 2022.

Announcing the news on Instagram, the actress wrote: "In July 2020, we sat under this banyan tree. We asked for magic. We were oblivious to the pain we would face together in such a short, frenetic period of time.

"Unaware of the work and sacrifices the relationship would require from us, but intoxicated off of the love. And the karma," she continued.

"Somehow, a year and a half later, having walked through hell together, and having laughed more than I ever imagined possible, he asked me to marry him.

Appearing at the premiere of Kelly's documentary Machine Gun Kelly's Life in Pink - where the singer says he called Fox while feeling suicidal - this week, the actress shared the lengths she has gone as a partner to help her fiancé with his mental health.

"We’ve done every form of therapy that exists," she told Entertainment Tonight.

"We’ve found a therapist that really works for us, couples and individually, and it’s definitely a process.

"Our therapist said that a relationship is basically the process of breaking each other down, but most people don’t have the tools to build each other back up, to rebuild."

Fox added: "And so, it’s a constant process of, like, suffering and passion and love and the repeat cycles. So, we're just learning that, and navigating that, doing that together."

The following day, the couple attended Kelly's concert at Madison Square Garden and after party, where at the singer gave a speech to the crowd before smashing a champagne glass at his head, leaving a gash which he didn't clean up for the remainder of the evening.

Both Kelly and Fox shared photos on Instagram together, with the singer sporting a bloody forehead.

While now planning their goth-themed wedding (there are no further details about that, just yet), Fox is still co-parenting her three sons.

However, she never posts photos of them and rarely discusses them publically.

In January 2021, Burgess uploaded her first photo of them, kissing on a balcony in Hawaii with the caption "Him".

During their first public appearance together in March 2021, Burgess said she enjoyed keeping their relationship between themselves in the beginning.

"We took our time and we really got to know each other for who we are on the inside. And we really built something beautiful," she told Entertainment Tonight.

"We just sat and had coffee and breakfast and talked, we didn’t kiss, we didn’t try to rush it, we just took our time," she said. "And then I think the fifth date was our first kiss."

In late 2021, the couple competed on Dancing with the Stars together.

"I’ve never done this before; I've never dated anyone that I've danced with, whether it was in my competitions or my DWTS career," Burgess told Page Six.

"So, everything for me is new — learning that balance, every day in how to approach it. I think that's the biggest challenge. It doesn't mean it's bad, either. We haven't had a bad moment for us because our communication is so great in our relationship, so anything that arises, we discuss it."

In February 2022, the couple announced they were expecting a child together. According to a source, Fox is "thrilled for them".

"Megan has congratulated Brian and Sharna and she really couldn’t be more thrilled for them," the source told Hollywood Life. "Megan feels like Sharna is a total blessing."

In June, Burgess shared some maternity photos, ahead of welcoming their baby boy.

"I can’t wait to share this next chapter with you. You are gonna be the best mum," Green said.

And on June 28, Burgess gave birth to their son: Zane Walker Green.

Uploading a photo of their baby's hand holding Green's finger, Burgess captioned the photo "Zane Walker Green. 06/28/2022 at 12.12pm. My heart is now forever outside of my body."

Green uploaded the same photo with their baby's name and time of birth.