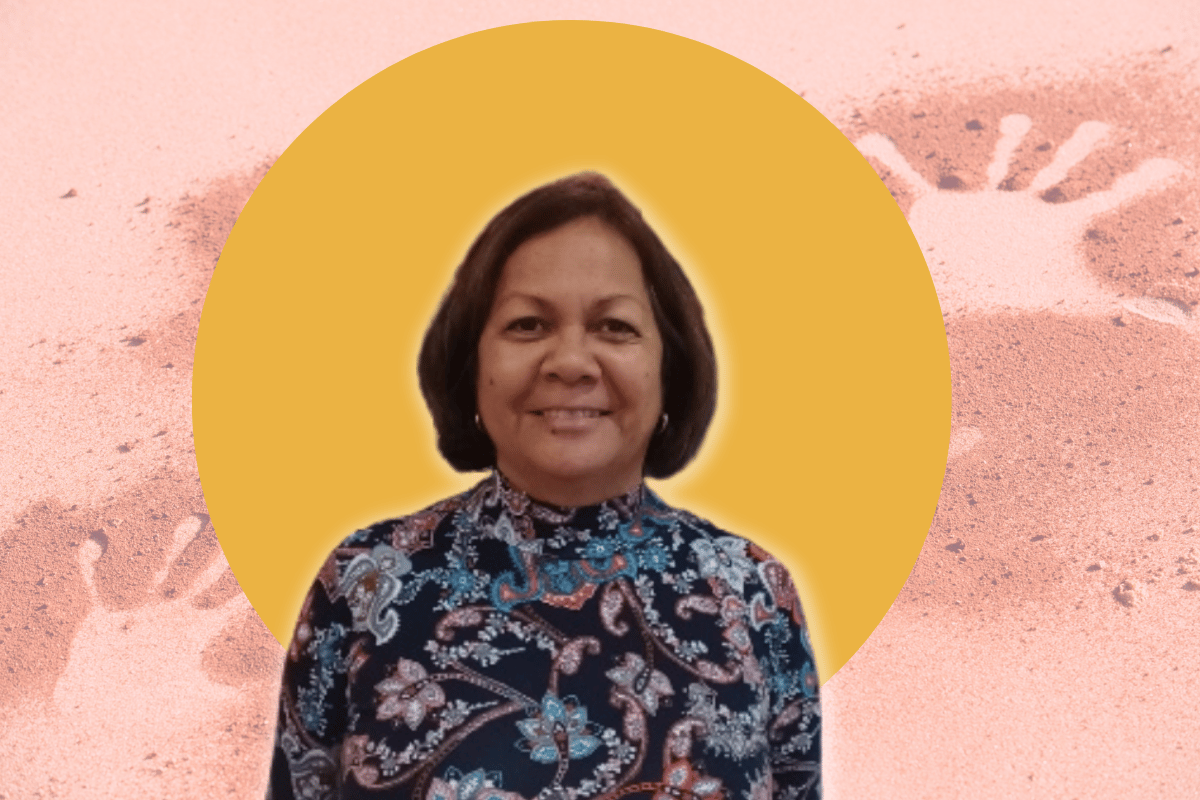 Warning: This post mentions suicide and domestic violence, and may be triggering for some readers.

As proud Waanyi/Kalkadoon woman Sandra Creamer reflects on the hardships she has faced, there is one memory in particular that hangs heavily on her words.

After mustering the courage to leave her violent marriage, she found herself at 33 years old, with four children in tow, and "as poor as a church mouse”.

They ate bread and gravy. Their electricity was regularly disconnected. And her car had been repossessed.

“I remember my son needed a haircut, and I just didn't have any money. So my daughter went ahead and cut his hair really short,” Sandra tells Mamamia, her voice cracking.

“When he walked out, it hit me: Is this how broke we are? That I can't even afford a haircut for him?”

It came after Sandra had also been forced to leave her job after suffering discrimination in the workplace.

“Being a single mother, having bills to pay still gets me upset,” she says, apologising for her tears.

“But I thought, I’ve just got to get up. I have to turn this around.”

Indigenous children of the Kimberley tell Mamamia what they aspire to be when they grow up. Article continues after video.

Sandra, the youngest of 12 children, was born and raised in Mount Isa. Her mother tragically passed away when she was just six months old, and with her father working as camp cook on and off a local station, she mostly was raised by several of her older siblings.

“It really did take a village.

“We were living on rations, tin fat from a blue can,” she says, pausing, “I’ll never forget it for the rest of my life.”

With no access to hot water, she also recalls the cold baths.

“But when you're living it, you don't actually see it until you leave.”

“I also lost a brother to suicide and that was quite hard. I lost a nephew and cousins to suicide too… but we are all always close together.”

Despite life being “tough”, Sandra says her early years gave her “a good life” too. Sundays were spent with her siblings out bush, exploring and swimming in waterholes.

Her father worked hard to make sure his children had “a roof over their head and everything they needed”.

“We were very fortunate that my father was never a drinker, or anything like that,” she adds.

Sandra also credits her father for instilling her work ethic - and the importance of education.

“My father always made sure we read a lot - even if if was just the Phantom comics.” He also made sure Sandra’s brothers got apprenticeships, and her sisters went to school - even though they weren’t able to continue into secondary education. They needed to look after Sandra.

Sandra herself received some high schooling, and was sent to a boarding school. But then it was “suggested” that she and the only other Aboriginal student go elsewhere - for no apparent reason.

She later went on to secretary school, and then worked in the Aboriginal legal service. And then, the government sector.

Eventually, Sandra married and had four children. But over the years, her husband became increasingly abusive.

Her friends and siblings pleaded with her to leave.

“Finally, it was after a big argument, and I thought to myself [after] getting a black eye, and being dragged around the house, and kicked - I was never brought up like this.

"It got to a point where I knew: I just can’t live like this.”

They divorced, and Sandra moved to the Queensland coastal town, Yeppoon.

“I was on the verge of a nervous breakdown… I was in a really dark space.” 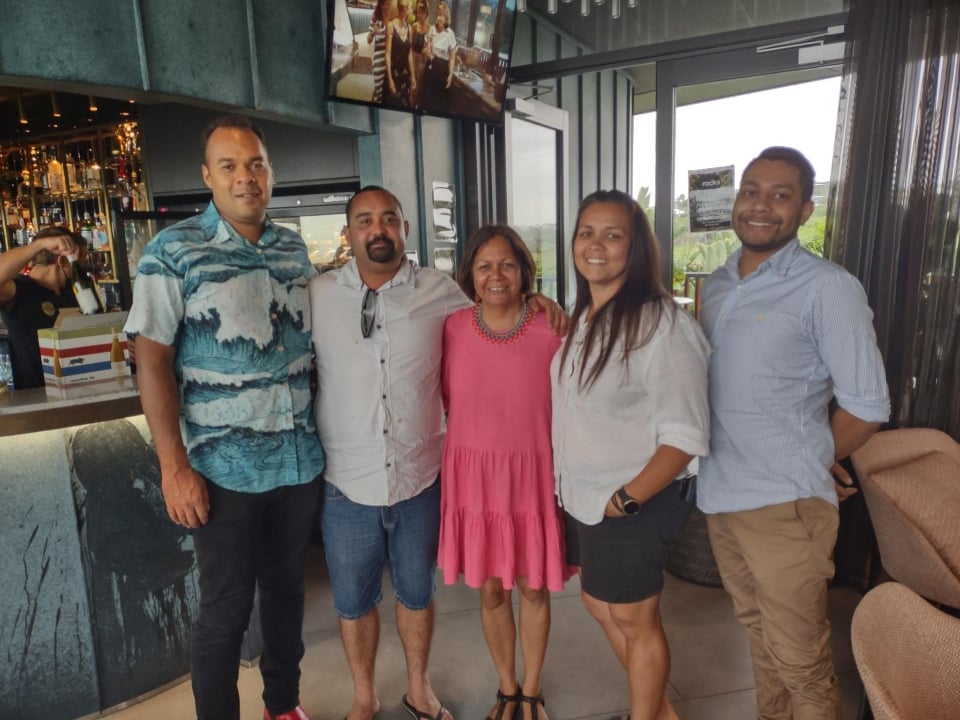 “There were times when I didn’t want to get up, and I’d lay in bed, and then I’d get up the next day and I thought; you know, I missed out on that yesterday, so I’m going to make sure I don’t miss out on that again. You realise how important life is.”

“I remember thinking, I've got to get up every day when the sun rises with these kids. I don't know how I'm going to do it, but we did."

Fortunately, Sandra also had the support of her best friend who lived close-by - and “some very good elders who really took me under their wing”.

But she didn’t want to rely on anyone, and was determined to get out of her situation by herself.

“I think that made me more resilient. And it made my kids resilient to life and understand, okay, well, how do we get out of this poverty?”

Sandra’s eldest child Joshua was around 13 years old at the time.

“He took on the man role,” Sandra reflects, sharing that he and her two other older children took on part-time jobs after school to help contribute. Sandra was determined to ensure the best education for them.

“And I always said to my children to get a degree or a trade. I told them, you know what it's like to live in poverty, and not have anything, and so they understood.”

Two of her children got degrees; two went into a trade.

From starting as an apprentice butcher, Joshua then decided to study law.

It got Sandra thinking about study again; she too, always had an interest in the law. At the age of 38, Sandra decided it was an area that she wanted to pursue - and enrolled at the Institute of Koorie Education at Deakin University.

“I had the worst divorce ever… I think that's what made our life so hard. And when you grow up with such a big family, you see things that just aren’t right. You have to make a stand for them. I’ve got to be able to right some of these wrongs.”

It was hard though. In the early days, Sandra didn’t have access to the internet. It also meant that at times, she would have to leave her children to undertake two-week intensives and placements. While interning with a judge in Melbourne, the judge saw Sandra typing her assignment on the work computer. She bought her a laptop - and thus began a mentoring relationship with Sandra that stretched well beyond her placement.

It was when Sandra began learning about human rights law that passion ignited from within. She attended the United Nations Permanent Forum for Indigenous Peoples in New York - and has continued to do so for the past 14 years.

As the years passed, Joshua graduated from law, and went on to become one of just 19 Indigenous barristers in Australia. He now specialises in human rights and native title - and has won some of the country’s biggest class actions.

By the age of 42, Sandra graduated too, and completed additional Law studies. Since then, she has dedicated her practice to Indigenous rights, human rights and the rights of women.

And then, in 2020 - at the age of 59 - Sandra was admitted into Queensland’s Supreme Court - by Joshua. She made history as the first Queenslander to have her admission moved by her son. 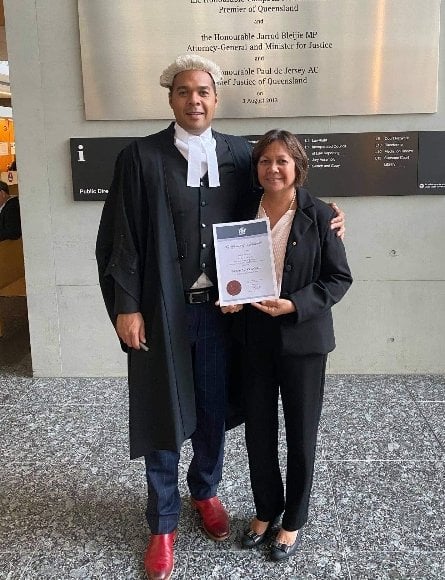 Joshua Creamer admitted his mother Sandra as a solicitor in June 2020. Image: Supplied.

“My son and I were just so proud. It definitely was it was one of the proudest moments that we've had.”

“It hasn’t been an easy road. Some people think, Well, your son's a barrister, you’re a lawyer. No. It was a hardship. And it was all of us overcoming trauma in our lives ourselves, with no handouts, nothing.”

“But it was those hardships and resilience that I guess made me who I am today.”

Sandra Creamer AM is now CEO of the National Aboriginal and Torres Strait Islander Women’s Alliance, is Adjunct Professor at the University of Queensland, and works with the International Indigenous Women’s Forum.

Reflecting on NAIDOC Week, Sandra says the path forward is really about living out this year’s theme of ‘Get Up! Stand Up! Show Up!’.

“And that's what we did. Every day we got up, no matter how hard we felt life could be. When you get up, you can rise up. You can make that change in you. It’s about lifting ourselves - and it’s a heavy weight.”

Listen to a snippet from this story on Mamamia Daily. Post continues below.

Sandra says her faith and dreamtime traditions have also been a source of strength during the darkest days.

“It’s about digging deep into yourself. Our purpose as Indigenous people is to continually care for our land and water, to care for our children and the community environment in which we try to raise our children. And it’s how we have made sure this their mother earth is here for the next generation.”

“It’s not all about money. It’s that deep thing; knowing our upbringing and stories, and to understand our purpose as stewards.” 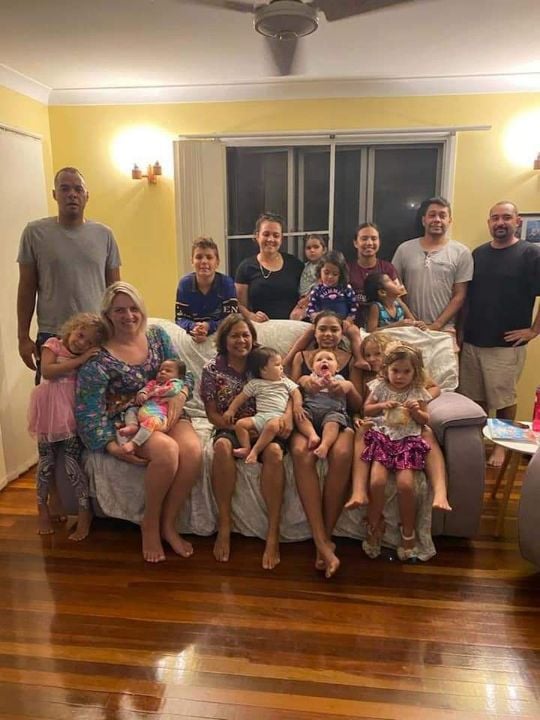 Sandra with her children and grandchildren. Image: Supplied.

“You have to hope. Give yourself hope; give your children hope.”

As for Sandra’s personal hope for what’s next for her, the grandmother of 15 now has the bar set in her sights.

“But here's the thing about getting up, and rising up: If you don't pass, and don’t succeed, you can always get up the next day, rise up with that sun, and go again.”

If you think you may be experiencing depression or another mental health problem, please contact your general practitioner or in Australia, contact Lifeline 13 11 14 for support or beyondblue at 1300 22 4636.

N
nicb a month ago