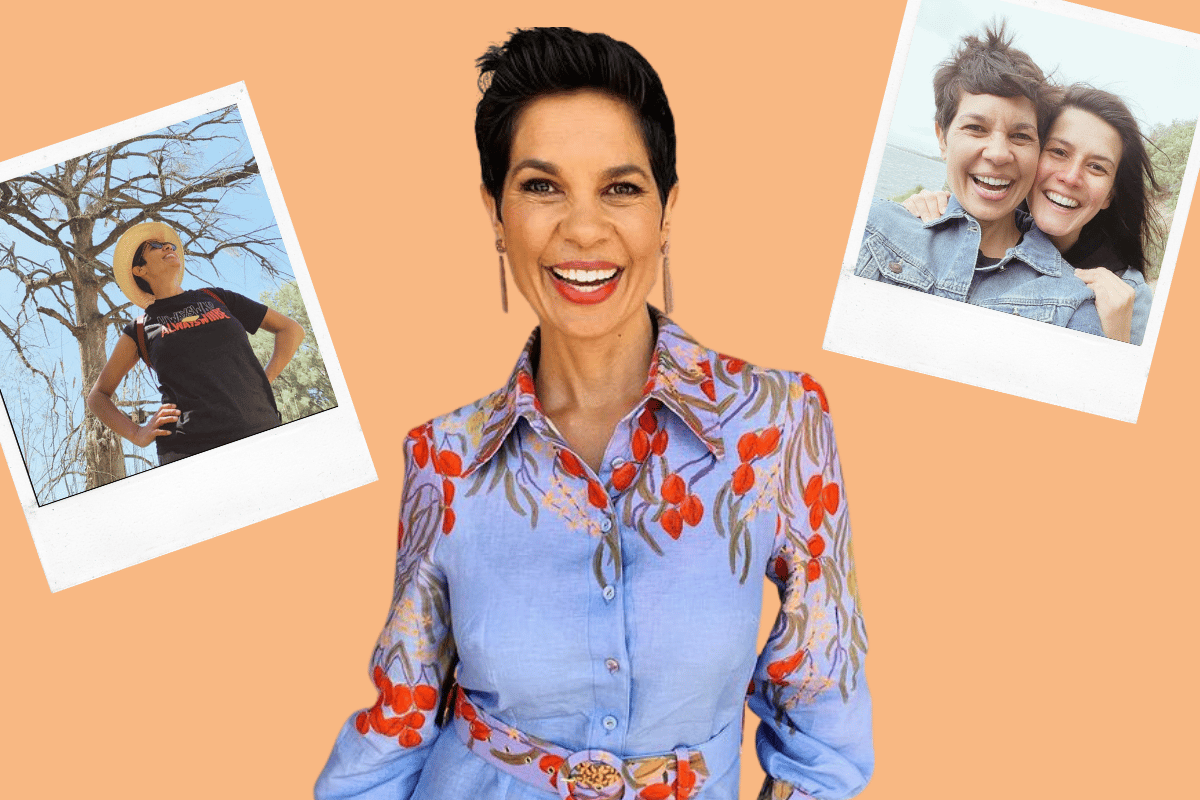 Narelda Jacobs is a journalist and television presenter. She is a proud Whadjuk Noongar woman. And she is the first openly lesbian newsreader in Western Australia.

But she is so much more than any label could encapsulate. Pregnant at 18 and married shortly after, Narelda’s life path looked to be paved. But then, just a couple years later, she found herself divorced, in a relationship with a woman and about to come out to her mum.

Speaking to Mamamia's Restart podcast, Narelda shares a more intimate side, delving deep to reveal her truest self; and how her identity has evolved over the years.

Listen to the full interview below, post continues after podcast.

A Swan River girl and the daughter of two Uniting Church ministers – her father, a member of the Stolen Generations, and her mother, Irish – Narelda is the youngest of five girls. While she discovered confidence and joy in speaking publicly first over grace at the dinner table, “I never thought I’d be speaking to the whole country," she recalls.

"That never entered my mind, ever.”

Narelda’s ambition for a career in the media sparked as a young teen – but there was a minor detour. At 18, she fell pregnant to her boyfriend.

Unable to face Narelda's dad, the young couple told her mum, who first thought they were joking.

“By the end of the conversation, she was actually on the phone, with the Yellow Pages out, finding reception venues for our wedding.”

“But mum was the most trusted person in my life… So when she said, 'You’re getting married', I didn’t question it."

And she didn’t. But on the actual wedding day, Narelda knew something didn’t feel right.

With a face painted with makeup, hair coifed and “the” dress, she recalls waiting to be picked up for the ceremony.

“And I just had this real emptiness. I remember thinking… I’m just going through the motions. And maybe I had a bit of shame for myself that it wasn’t right… Maybe I felt like it was for show.”

Six months later, the marriage was over.

A single working mum to a young daughter, Narelda’s dreams of journalism felt like they were slipping away. With knockbacks from entrance into a broadcast journalism course, she worked at the Native Title Tribunal. It was there she befriended "a group I really loved, and they were lesbians."

“They took me out on a Friday night, and we went to the Court Hotel in Perth, and then my eyes were opened.” tells Narelda.

“That was my first experience at a queer venue, and I just walked in there and was like, ‘Wow!’ …That was probably my first clue, I guess.”

Before long, the friendship between Narelda and one of her female work friend’s began to blossom. They went from sharing lunch daily, to entering into a relationship together.

“That was the next restart.”

It took three years for Narelda to come out. At 21, again, she found herself before her mum with a confession.

When the personal and political collide.

Despite the knockbacks in gaining entrance into broadcast journalism at Western Australian Academy of Performing Arts, Narelda was determined. Finally, she was accepted and an illustrious career in television reporting ensued.

Narelda reflects, “Going back to when I started in the newsroom, I think they had concerns [that] being an Aboriginal lesbian woman, I would bring a level of politics with me. And when I got the job, they said, you can’t be political.”

“Can you imagine: Being an Aboriginal person, [and] you can’t separate the political from the personal?”

The interplay of Narelda’s personal and public self was further tested as the debate around Marriage Equality peaked in 2017; with the frustration of not being commentate, but just report.

“I wanted to be in the media so badly, and there were no other jobs in Perth… But what it meant was, I did actually shut down that [personal] side of myself, and even to the point of never going to a protest… That impacted on my identity, and the perception that people had of me.”

“…Looking back now, there was so much that I could’ve done. So much I could’ve done to lend my voice to campaigns and issues that were happening around me… [Although] I have since been told that the visibility of sitting there [on the news desk] was enough.”

And that is at the heart of what drives Narelda now: Being an advocate for positive progress, for those on the margins who remain unseen.

“My whole life has brought me to this point of, let me have the toughest conversations that we can possibly have, because if I can have some cut through, if I can reach some people in their bubble, then that is my job done.”