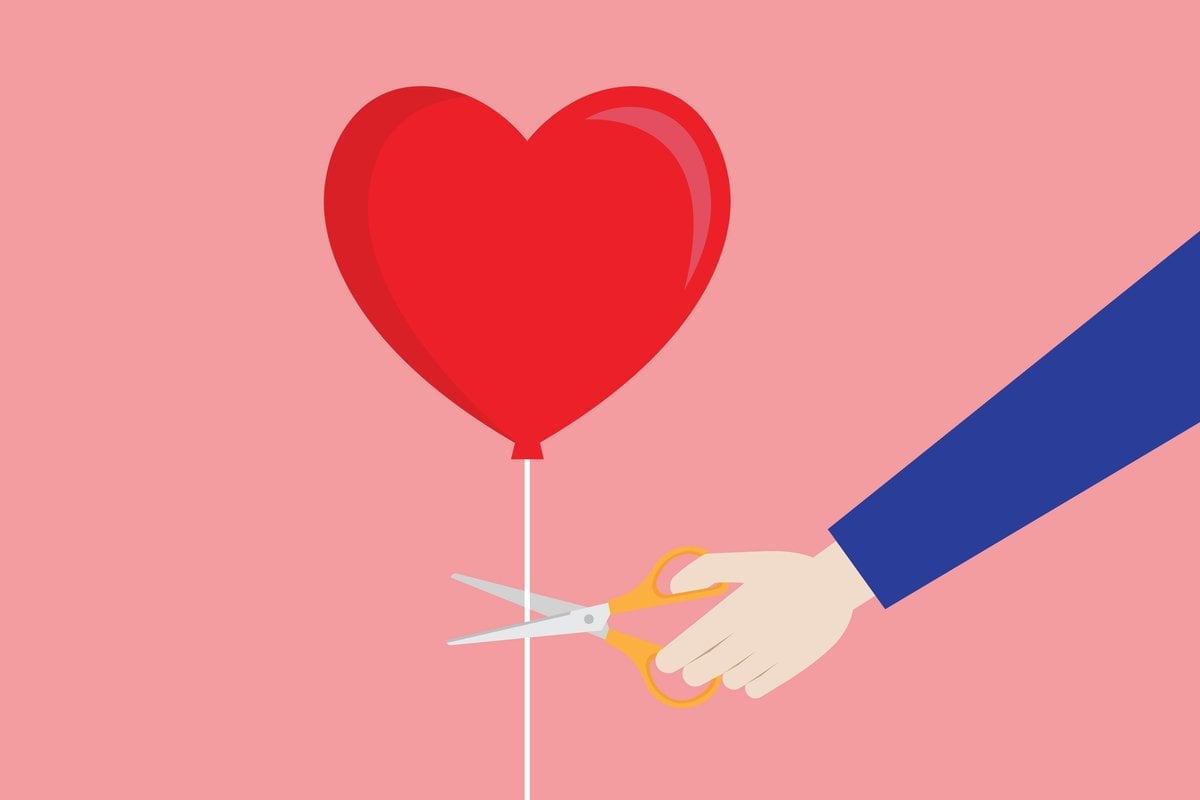 But what about when it's you doing the breaking up and you in fact do not mind being a major a**hole?

It's understandable. It's relatable. And sometimes, we have to be just a little bit petty when it comes to cutting people off.

To show you just how common it is, we decided to share 31 people's petty breakup stories.

From friendships and family to short-term flings and long-term relationships, here's what they had to say.

"My partner wanted to go into an open relationship. I was losing feelings, we hadn't seen each other in about two months and I found intimacy really awkward at that point so we hadn't 'done it' in over three months.

"He'd gauged for my opinion on having sex with others and I said yes, purely because I wanted to dump him the second I found out he actually slept with someone else.

"I probably should have just been honest with him... Sorry not sorry!"

"He had PERFECT skin. And it pissed me off. I couldn't handle it. He didn't even clean his face, he used shampoo as face wash (which he used rarely BTW) and he NEVER moisturised. Mix that in with the fact I found him applying my expensive face wash all over his body in the shower and you get a crazy girlfriend in result. I chucked the biggest fit and then I realised what an idiot I was being and just decided to break it off.

"A few years later when we ran into each other, he still had that perfect skin. Hadn't adopted a new routine either. GRR!"

"We'd been dating for three months and at a birthday dinner with all of my friends, out of nowhere he stood up and did a speech about how much he loved me. We absolutely were not at that point yet - we were still getting to know each other and it was so uncomfortable. For everyone."

"This isn't super petty, but I found out a high school boyfriend was going to break up with me so I did it first. He had told my friend, so I texted him and ended it. Pretty petty TBH, but it was one of those silly high school romances."

"Saw his bedroom for the first time, got enormous and irreversible ick. Ended it the next day."

"He sent me a snapchat selfie with the dog filter over it. Yucky."

"I deleted everyone off my Facebook who voted for Brexit. I don't think that's petty but others might."

"He threw litter out of the car!"

"My first boyfriend and I had been together for way too long (almost four years I'd say) when I decided I wanted to break up with him. I was very scared to be alone, but I couldn't get over the fact that I just found him so unattractive. I hated sex with him and he looked like a child. It gave me such an ick, because he acted like he was so big and macho, but we'd have sex and I would CRINGE at everything he did, because he reminded me of a child. Oh my god, I want to die just thinking about it.

"It's funny because I had so many valid reasons to end it with him, but this was the biggest reason why for me."

"I broke up with my boyfriend of two days in Year 9 because another boy I had a crush on told me I was cute over MSN."

"A while ago I went out with a guy I met on a night out - we had been texting for ages, he was so cute and he seemed to have good vibes. On the first date, he said to me 'you're not like a lot of girls I've met. I can tell you have your s**t together and you have a plan for your life'... I INSTANTLY got the ick.

"All I could think was 'lol NO I do not and are we even on the same date right now because where did you get that idea??'

"Also, don't 'you're not like other girls' me?? And then he sent me a meme the next day that was absolutely not funny and I had to cut it off instantly."

"We were at a restaurant and he was telling me about this rollercoaster he went on in Japan and mimicked the sounds he made during it. Called it off that night."

"I had a guy who I was talking to for months and I really got along with him but I couldn't get over the way he said, on several occasions, 'I can't wait to flirt with you.' 'be prepared for some below average flirting.' 'what are you doing on Thursday? I want to flirt with you'.

"We went on a date, even though that was turning me off, and it wasn't for me. He still replies to my stories saying 'I want you' and it DOES NOT HELP HIS CASE. I HATE IT. Don't talk to me like that."

"Absolutely petty, but he was a very intense mouth breather and I literally just couldn't get past it."

"He lied about his age and I only found out that he was FOUR years younger than me (19!!) because he had stalked me on LinkedIn with his full name and I was able to find his high school graduation pictures on Facebook. They were dated 2020. I literally almost died."

"He became extremely upset when I declared I wanted to lose weight. He liked me with the extra fat, and he made that clear. It made me feel so upset and broken inside. I had to block him on everything once and for all after a few minutes of listening to his bulls**t."

"My friend broke up with me because I ate one of her Malteser bunnies."

"I went on a few dates with who I thought was some hot Irish man. He dressed well and spoke well. I finally went back to his, and he had a mattress on the floor and milk crates for tables. He was 35!!!"

Listen to this absolutely petty breakup story from Overshare. Post continues after podcast.

"Years ago I went out with a guy a few times and then called it off because he had a long torso and really little legs. His height was normal overall, he was perfectly healthy, but the proportions were…. off.

"I couldn’t deal. He was lovely but I every time I saw him I was eyeing off the teeny legs. I felt as shallow as hell even caring about it but... oh well."

"They did not put the Tim Tams back in the right section of Woolies when we decided we didn't want them. Just wrong!"

"My first boyfriend wrote me a poem, writing: 'Lisa Harry, you're the one I want to marry.' I broke up with him on the spot."

"I didn’t like his name. He was a handsome, kind and fun farmer but I couldn’t take him seriously with his 'old person' name. Irony is about a decade after that I married someone with that same name..."

"I broke up with my boyfriend in Year 8 because I had just seen Harry Potter and the Goblet of Fire and thought Viktor Krum was my soul mate."

"My best friend all through school didn't get me a present for my 13th birthday... Never spoke to her again."

"In my younger, more shallow days, I broke up with a guy because his big toe was much shorter than his second toe. And another one who had a weird name. No, I’m not proud."

"On a date the guy responded 'what kind of name is that?' after asking me what my dog’s name was. I never went on a second date…. It’s Pepper by the way! It’s the name he came with and I love it!"

"We were at Deans in the 90s. It was a late night cool cafe in Darlinghurst the 1990s, and I’d taken him there - then he started eating his nachos with a knife and fork!!! Mortifying."

"They didn't own any shoes."

"He had little hands. I tried to ignore it, but I just couldn't. Little hands freak me out."

Have your own petty breakup story? Let us know in the comments below!