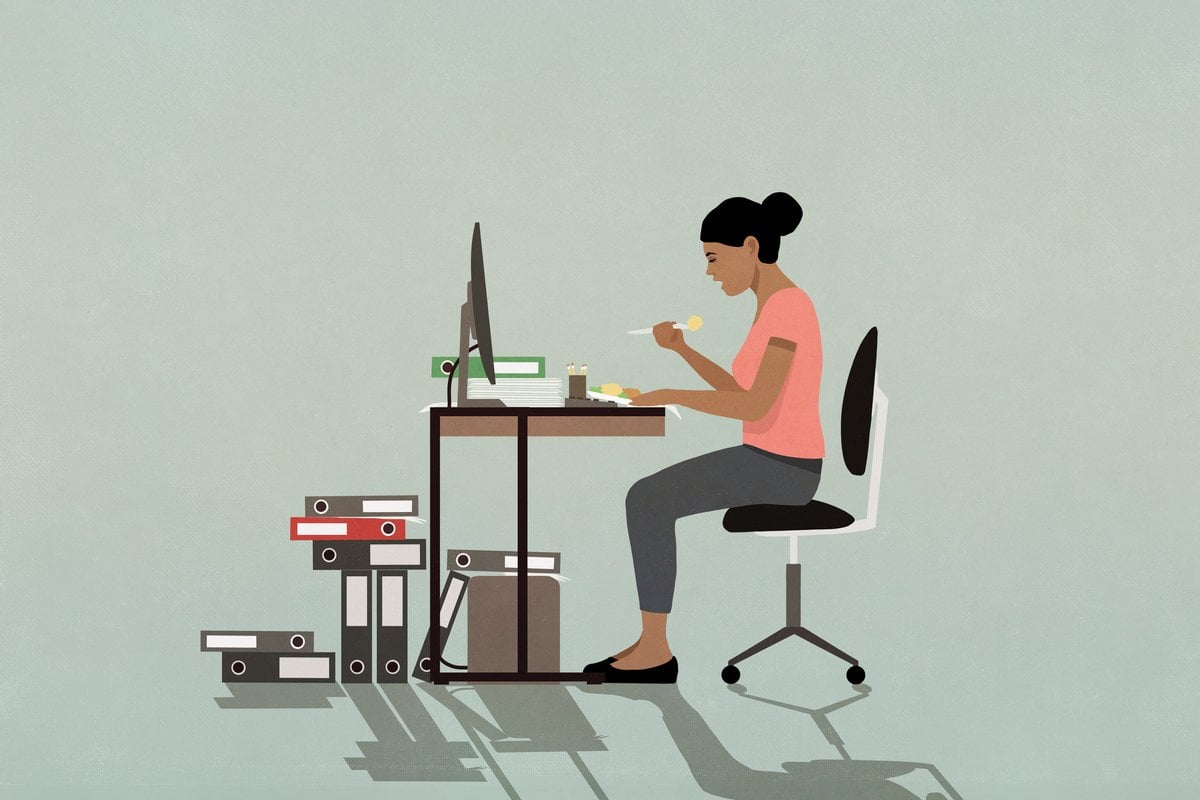 We put a lot of pressure on ourselves to get things done. No matter the cost.

If you're working a 9-5, chances are, you've stayed behind to get that report finished at least once. You've skipped a lunch break, or mentally kicked yourself for losing focus when you really should've been replying to an email.

But believe it or not, your workday doesn't have to be a guilt-filled, burnout-inducing drag.

Watch: The things successful women do on the daily. Post continues below.

Donna McGeorge is a best-selling author and an overall effective woman who knows how to get sh*t done. And she's also an expert on all things productivity.

So, we thought we'd get her to break down a few misconceptions you probably have about "hard work".

If you're anything like me, you'll be very relieved to hear that you shouldn't be doing your hardest task first thing on a Monday morning.

As McGeorge explains, the age-old 'eat the frog' productivity myth might just be more counterproductive than we've been told.

"The neuroscience has shown us that creating momentum is more important," she says.

"So, do a few things that are easy, doable, and that you can tick off early, as it creates a feeling of momentum throughout the day."

Author, Charles Duhigg agrees. In his studies on habit, he shares that the most important thing to do everyday is making your bed "because it creates a precedence of achievement."

"So creating a pattern of completion or achievement sets off neurotransmitters that will make you feel more motivated to continue, regardless of the difficulty or level of desire."

You have our permission: choose the path of least resistance.

2. 'Working hard will make you successful.'

We've said it before and we'll say it again: productivity is all about working smarter, not harder. And McGeorge agrees.

"Instead of working hard, we want to talk about being in flow," she says.

"If you reflect on your most productive days, they were usually when you were doing things in flow, doing the right things, and it didn't feel hard. So, identify the two or three things that will make a real difference in your day and do those."

Alana Built An After School Program That's Now In 40 Schools

Once your 'flow tasks' are up, take your foot off the accelerator.

"It's about identifying what's most important doing those things, and having a state of flow throughout the day rather than feeling like you're working hard."

You need to stop giving 100 per cent of your energy to your workday.

According to Donna, working at full capacity is a recipe for burnout and missed opportunities. But there's a very easy way to cut back on your workload.

"Studies have shown that people operate more consistently at about 85 per cent capacity. So they're not using 100 per cent of their energy," she says.

"If you think about your calendar, you should be leaving at least 1-2 hours free from meetings. Create that buffer for yourself to catch up on work, or to take advantage of an opportunity."

By allowing for a 15 per cent buffer in your day you'll work at a more consistent, lower pace throughout the day instead of a frantic rush.

According to McGeorge, we should all be scheduling time in our days to stare into space, and yes, we're as excited to hear that news as you are.

"We need to be daydreaming to access our alpha brainwaves, and this is where our creativity lives.

"I always pay attention to the first thoughts that happen in my head, first thing in the morning, because that's usually coming via alpha brainwaves.

"The only way you can get access to those alpha brainwaves is a single point of focus - so things like meditation, yoga, and daydreaming. Just sit and stare into space for five or 10 minutes, and you'll get solutions that you hadn't really thought possible."

It turns out, long to-do lists "usually leads to feelings of overwhelm and inadequacy"... And this makes a lot of sense.

"If you're going to create a list, you should write your tasks down and carve them up according to the best time of day.

"The mornings are better for mental alertness, so things that require a little more mental intensity should happen in the morning.

"The afternoon is better for routine work."

Throw the to-do list out the window and line your tasks up to your circadian rhythms.

Donna McGeorge is a best-selling author and global authority on productivity. Her book series, It’s About Time covers meetings, structuring your day, and doing more with less. It is available in bookstores around Australia or can be ordered online via  Donna’s website.