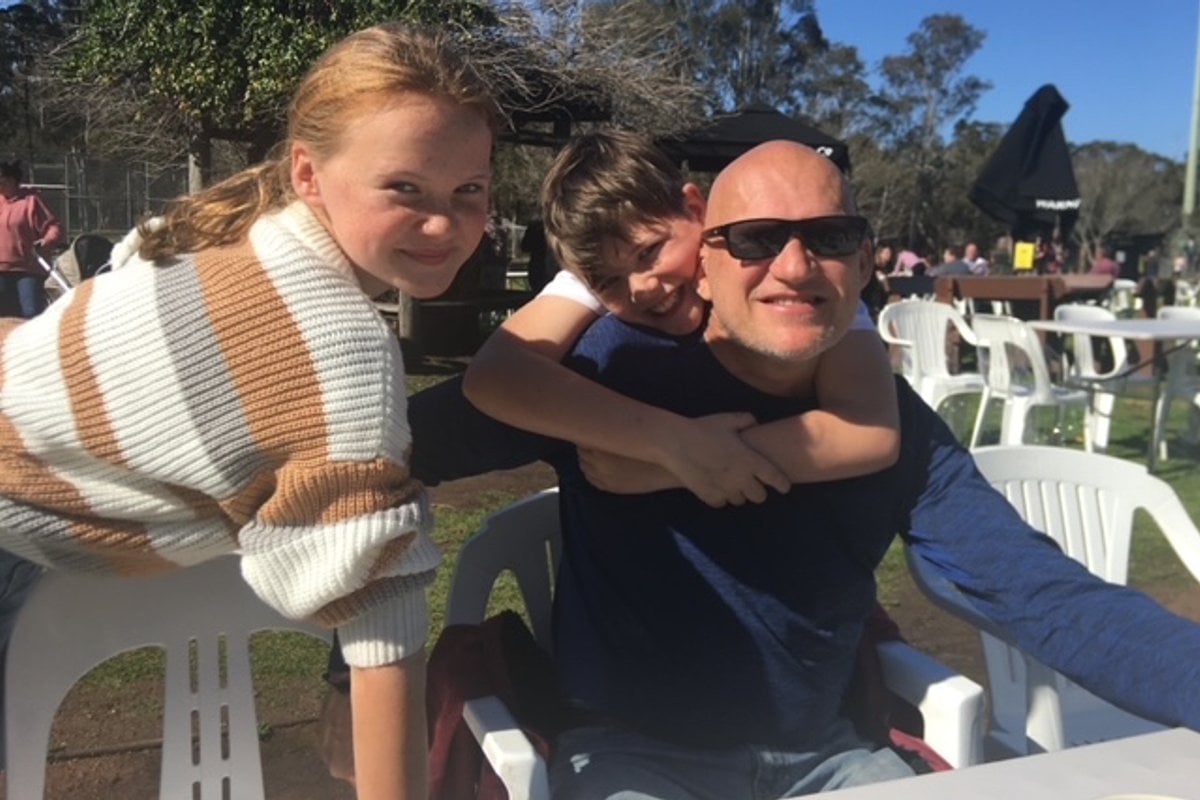 We are about to embark on our first overseas trip as a family of three. We need it.

It’s time to try and emerge from our grief cocoon.

My young teenage children and I are trying to navigate our new life without their dad and my husband. He was fit and healthy until prostate cancer stole his life right from underneath us.

He was only 53 when he died. We never saw it coming. 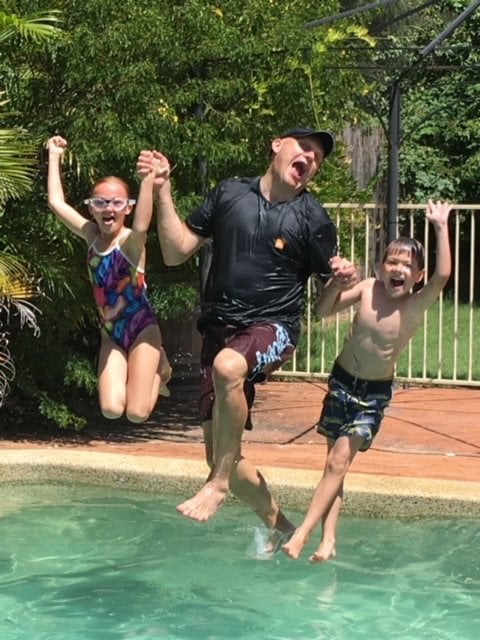 What we witnessed in his final months can only be described as the stuff of nightmares.

Our kids saw a strong and confident man become a prisoner in his bed, screaming through the night in pain as the cancer spread through his bones.

We were on a holiday to Hamilton Island when Mike first commented he was getting too old to drink alcohol - it was making him pee frequently.

I told him that was nonsense and when we got home I sent him off to the GP for what we joked would be a grease and oil change. We had no idea what lay ahead.

He was 51. With no history of prostate cancer in Mike’s family, it wasn’t something we’d ever worried about. Mike’s GP ordered a PSA blood test - a simple blood test that he would have had sooner if he’d known it was available. We weren’t ready for the results that he got back.

Mike had a Gleeson score of nine out of 10 - which is about as bad as it gets. When he had a PET scan his body lit up like a Christmas tree. There were small green spots on his kidneys and on his bones. The cancer had already spread outside the prostate - there was nothing we could do, apart from trying to slow it down.

We spent months going between specialists. The 22 months of treatment before he died were hell. In one of many bad episodes, Mike developed a really sore arm. Scans discovered it was broken - the treatment had wrecked his bones and they were so fragile that he broke his arm without falling.

Then we thought he had a pinched nerve in his back, and it got to the point where he couldn’t even sit down. It turned out to be a tumour in his spine. He was in agony.

How would we tell our kids that he was dying? Mike was stubborn and ever the optimist - completely changing his diet, trying to get listed in clinical trials and refusing to concede that it was terminal.

'Eventually' came too quickly. From start to finish, it was 22 months. One minute my kids had a fit, healthy and fun-loving dad... and then he was gone. 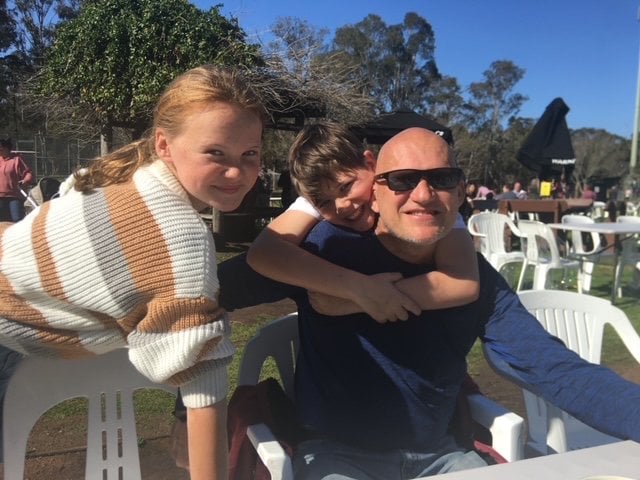 I’ll never forget when reality hit him. He broke down privately and really cried. He just kept saying, "Oh my God, it’s all happened so fast." Towards the end, I gave up work to help care for him. He could barely leave his bed.

He didn’t want to go into palliative care, so we engaged services to ensure he could be at home. He was terrified of dying in a strange place, but in the end it was the only thing to do… he was in so much pain. I think he knew that if he went, he’d never see home again.

His last day at home was a Sunday. Our family visited and took turns sitting with him. He was in terrible pain, even the painkillers weren’t working. By 4am he was screaming. I’ve seen this man break his collarbone and not make a sound. That night will be seared into my brain forever. Our kids will never be able to forget it either.

We called him an ambulance. His body was disintegrating from the inside. When we got to the hospital, all the doctor could say was, “I’m sorry". We knew then he didn’t have long to go.

Even the best specialists couldn’t get his pain under control. He needed morphine just so we could touch him. He stopped eating and drinking. All he had was pain meds. It took 10 days - he wanted to hang on.

He closed his eyes for the last time in the middle of the night. I’d gone home to check on the kids, after nine days straight in palliative care with him. I’ll always feel guilty that I wasn’t there, even though I know he wouldn’t want me to feel that way.

On one hand, the kids want their dad. They miss him. But on the other hand, they know he couldn’t have gone on in so much pain. 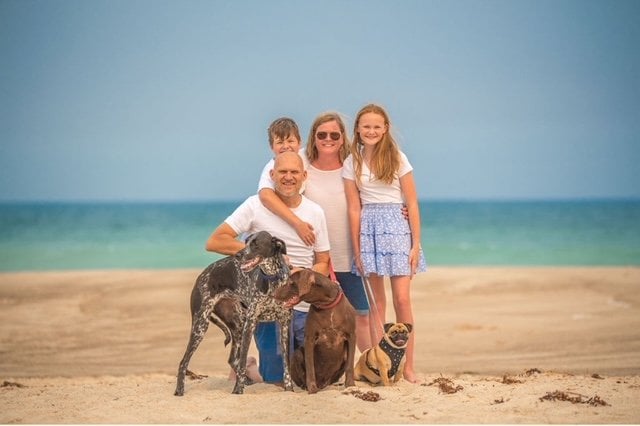 Prostate cancer is just never fair. I guess everyone grieves differently. My daughter Beth is more accepting and more logical. But our son Kai finds it hard to speak about his dad and shuts down. For me, nights are the hardest. You just miss your mate. It’s a feeling I don’t want any other partners and families to face.

Mike loved keeping fit, so in his honour I’ll be walking 49,000 steps in support of the Prostate Cancer Foundation of Australia’s Walk for Him campaign this Men’s health week from Monday 13th June, to help raise awareness and funds.

I’ll have to find my shoes first. And I know I can relax and reflect as we jet off on our holiday the very next day.

You can register for Walk for Him at www.walkforhim.org.au.

Reply
Upvote
It is unfortunate that palliative care was not accepted in this case, and that hiring private care was seen as the only option. Good palliative care is centred around alleviating symptoms and optimising qualify of life, and can facilitate an empowered death which doesn't necessarily need to occur in a hospital setting. It sounds like the dying process here was really traumatic and that must have been awful for all involved. It is important, however, to underline for readers who may be frightened by this article, that palliative care is a valuable option that is all about living and dying well.
BTW, a PSA doesn't give a Gleason Grade - the latter is obtained via a biopsy of the cancer itself. A PSA result is measured from a simple blood test.
News
General
Opinion
True Crime
Politics
Sport
Explainer
Entertainment
Celebrity
Reality TV
Movies
TV
Books
Rogue
Royal
Lifestyle
Beauty
Fashion
Weddings
Home
Wellness
Health
Fitness
Travel
Food
Family
Before The Bump
Pregnancy
Baby
Kids
Teens
School
Parent Opinion
Work & Money
Money
Finance
Career
Lady Startup
Relationships
Sex
Dating
Separation
Friendship
Family
Real Life
Couples