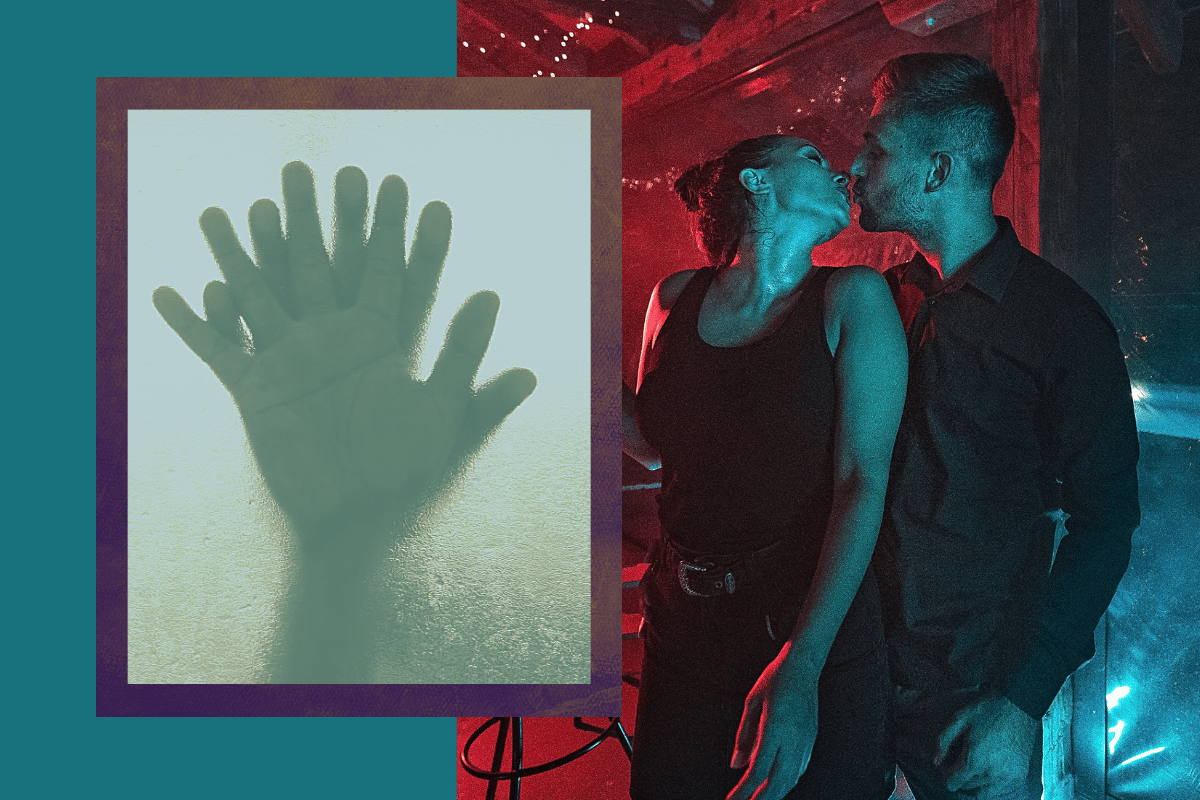 To be honest, I was looking for trouble from the moment I stepped through the nightclub's front doors. Creeping down into its underground, I felt the beat of the music pulse through my body, as between my thighs tingled.

It was Europe. Anything goes here, I smiled to myself, passing dancefloors of men and women pressed up against each other. As the crowd around us swelled, I darted to the right, turning away from my friends and disappearing into the throng.

I felt like losing myself that night. And giving in to all temptation.

As I moved through bars and rooms with more people than the last, I found myself walking across a dancefloor when suddenly someone tugged at my hand.

"Hi," a deep voice out of nowhere cut through the DJ, as lips brushed passed my ear.

I pulled back, looking up into blue eyes that gleamed with something more.

"Want to dance?" he asked in a Swiss accent, his body towering over mine, blonde hair mopped on top. He was tall and broad, and incredibly sexy.

Inside I grinned, this was it, as I let myself get swept into his arms, moving against the tide of music.

As he pulled me close, our conversation petered out, lost to the noise of the night. But with hands that slipped down my waist, he let me know what he was thinking. Tilting my chin up, his lips covered mine, and I matched him tongue for tongue.

Edging his face back, he held me tight, looking down into my eyes, before slipping his hand around mine and leading me off the dancefloor. Pushing through the crowd, we came across lounge suites at the back of the room.

Falling into one, he drew me down until my legs were over his. As I looked up in surprise, he moved towards my neck, kissing down my skin while his fingers slid over my dress.

Under the darkness of dim lights, I arched backwards as his hand slipped under the flimsy hem, giving in to the moment I hoped no one could see. As his palm pushed up my thigh, I clenched with baited anticipation, before his warm fingers pressed inside. Under his touch, I squirmed, trying to hold myself together.

Beneath my legs, I let him harden, as I moistened his hand. It was becoming too much for either of us to bear. Leaning forward, his voice toppled over the music.

"Come with me," it urged, with a desperate inflection.

I felt myself nodding. I’d never wanted anyone more.

As he guided me through the club, I floated through an alternate universe, where I bent to every whim.

By the time we reached the bathroom door, there was no going back. Despite how lewd I predicted the inside would be.

Quietly slipping into the stall with barely a glance from other guests, I closed the door behind me to find it had no lock. Oh, I thought frankly, this will just have to do.

Dropping the toilet lid, he sat down in front of me, his eyes burning with desire. Reaching out, he grabbed my waist and pulled me in, while I lifted one leg and then the other until I was straddling him.

With my arms encircled around his neck, I drew myself forward, grinding against his rough jeans and hard-on beneath me.

I was suddenly living a fantasy I’d only ever imagined. It felt bad and dirty and so, so naughty. But I was loving every second of it.

As he worked his fingers into my panties, I fumbled with his belt, before he hauled his fly down and sprung free. Lifting me up so I could slide onto his gleaming skin, he brought me down hard while I held on firmly to his shoulders.

Bouncing off my tippy toes as he gripped my bare bum, I worked my way up and down, taking the lead yet utterly under this thumb.

Listen to this episode of Sealed Section. Post continues after audio.

Suddenly, I heard people enter the bathroom, and slapped a hand over my mouth to stifle any noise that might escape. But they didn’t deter our movements, and we kept going, faster and faster.

All at once, I felt the toilet door tip open behind me, and shoved a spare hand backwards to stop anyone come in.

The pressure was mounting. We were about to get caught at any moment. But we kept on going.

With fingers hooked around the hole in the door where the lock should be, I used the ledge as leverage to anchor my body and grind my clitoris.

Drawing him closer and closer, as his face muffled into my chest, I gave one last bounce as he thrust into me. Climaxing higher than I'd ever had before, I groaned loudly into my palm, praying the music outside would drown out my pleasure.

As my body responded, perched on his lap and quivering, he held me tight, just as security burst through the door and kicked us out.