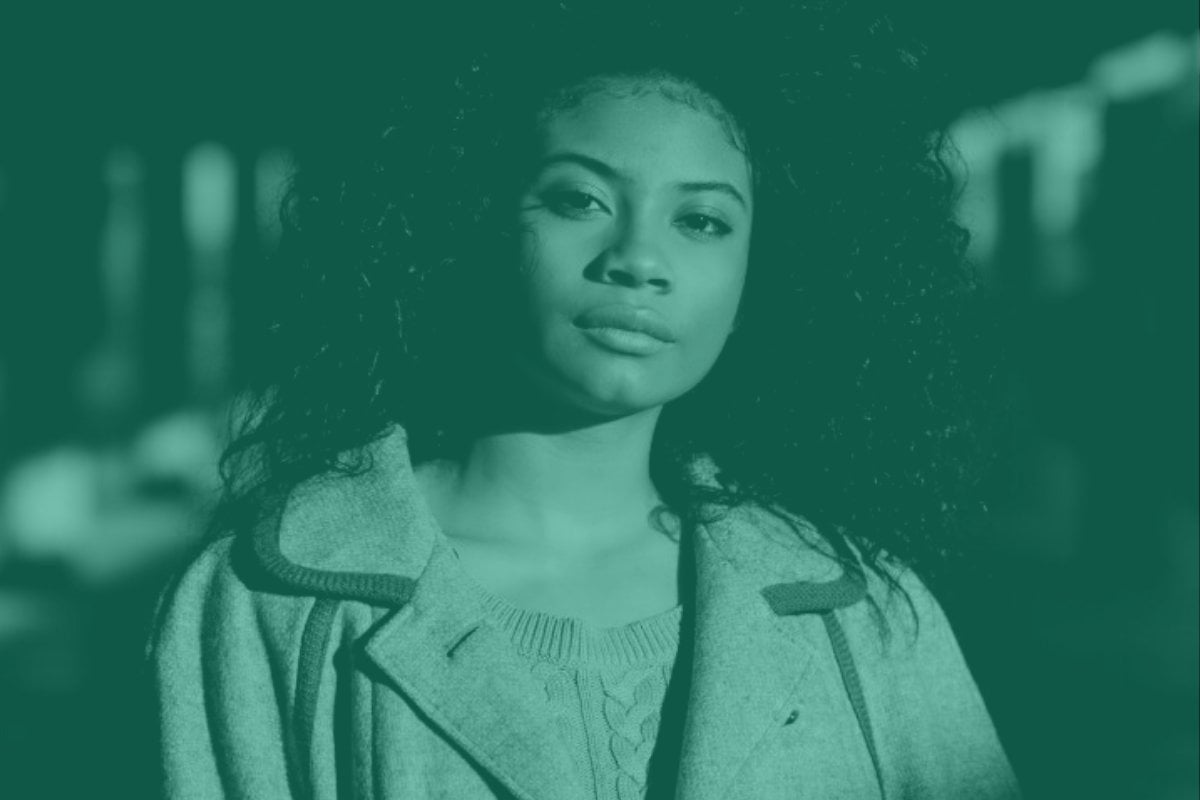 In two steps, he had me up against the information sign, my back pressing into its hard metal edge.

With his mouth wrapped around mine, his tongue pushed inside. Impatient, hungry and desperate for more.

His hands moved quickly down my waist until they wrapped around the back of my thighs. Then, in one swift movement, he lifted me until I lay flat across the sign. My back obscuring details about the state’s tallest tree.

While you're here, watch Mamamia's sex survey on Australian women about the intimate details of their sex lives. Post continues after video.

As his fingers made their way up the bottom of my shorts, I clutched at the aluminium, frantically holding on, and gasping for more. A need like I’d never felt before.

By the time he pushed my bikini bottom out of the way, I was wet with desire. I needed him at that very moment.

With expertise I didn’t know existed, he dropped his own shorts in a second while holding my body up. Then, just 100 metres from the bush carpark, he took me. Hard, passionately, up against the sign as I stretched out, calling up into the wild. It was carnal and animalistic. A compulsion neither of us could control.

Nor recognise. Because, despite our three-year long relationship, it had never been like this before. Ever.

My ex was, mostly, great in bed. Incredibly sexy, in a way that made others tell me he looked like Zac Efron, and with a strong sex drive to boot. We had fun, and I always came to the party, but between the sheets, the ice cream was straight-up vanilla soft serve.

There was no passion, no excitement, and definitely no spice. We had our routine down pat. The same three positions were on constant rotation. Missionary, doggy, cowgirl. Without fail. It was all wham, bam, and straight to the point.

Yet inside, it always left me wanting so much more.

I dreamed of him just grabbing me and taking me, then and there. Of trying different positions, and anything outside of the box. I wanted him to be rough. I wanted some naughty, dirty talk. I wanted anything out of our ordinary.

And mostly, I really wanted him to go down on me. Something he never did once in three years.

Amongst a myriad of reasons, we eventually broke up, and I never saw him again. Until three months ago.

Almost six years to the day since we’d ended things.

We started with a dinner, and then the following week we saw a movie. Later on, it was a hike and then one day, as he dropped me home, he kissed me.

It was nothing spectacular – slow, soft, gentle – but all the emotions came flooding back and I was left feeling things I hadn’t felt in years.

After that, we went camping. With one tent. And one sleeping bag. After weeks of acting like we were dating, sex felt inevitable, and I was so excited to spend the night together.

Maybe sex in a tent never is, I told myself. But it was like all the old parts of us came flooding back. And it was nothing to write home about.

We didn’t even make it past a missionary.

After that, we became just friends again, drifting off into a kind of balance where we both didn’t want to get involved and hurt again. And for months we stuck with that, just enjoying each other’s company and friendship.

But then I was about to move interstate and we decided to take a road trip just before I left. A few hours down south. Just for the night.

Maybe it was that relaxed holiday atmosphere, or maybe it was lying side-by-side in a bikini and boardshorts for hours by the lake. But by the afternoon, the sexual tension was palpable. And by the time we made it back to the car, we couldn’t keep our mouths off each other.

Fumbling in the front seat, he pulled me into his lap as he slipped his palms inside my little blue bikini.

Breathlessly, I grabbed at the ceiling of his four-wheel drive as his mouth came down hard on my bare nipples. With the steering wheel digging into my back, I pushed down hard, feeling his fingers deep inside me as I shut my eyes to the risk of getting caught.

Within moments, the pleasure had radiated across my body, with a rising heat I hadn’t felt before. His fingers, once so familiar I knew each print, now felt foreign. The hands of a stranger I’d never met.

Giving into the sensation, my back arched, by neck stretched up, I let go. Coming undone in his reshaped palms like putty.

Panting, I pushed myself off him and into my own seat, before turning to undo his shorts. As I slid my lips over his skin, the adrenaline continued to pulse through me.

In a carpark in broad daylight. We’d never done this before.

Groaning, he placed his hand on top of my head, as I pushed myself deeper.

"I can’t," he moaned after a few minutes, pulling me up.

"Come with me," he ordered.

Spilling out of the car, we straightened up our clothes as we walked across the gravel and into the bush, following a walkaway out to this big old tree.

I assumed we’d come to see it.

Oh, how wrong I was.

By the time he had slipped out of his shorts, I needed him like I’d needed no one before. And, suddenly, he was like no one I’d ever met.

In a crazed and frenzied heat of passion, he unleashed, finally letting go, breathing down on me as he came.

After that, we checked in to our cottage on a farm, where we barely left the room. And for the first time, not just with him, but in my entire life, I came through oral sex.

It was everything I’d always dreamed of.

The author of this story is known to Mamamia but has chosen to remain anonymous for privacy reasons.