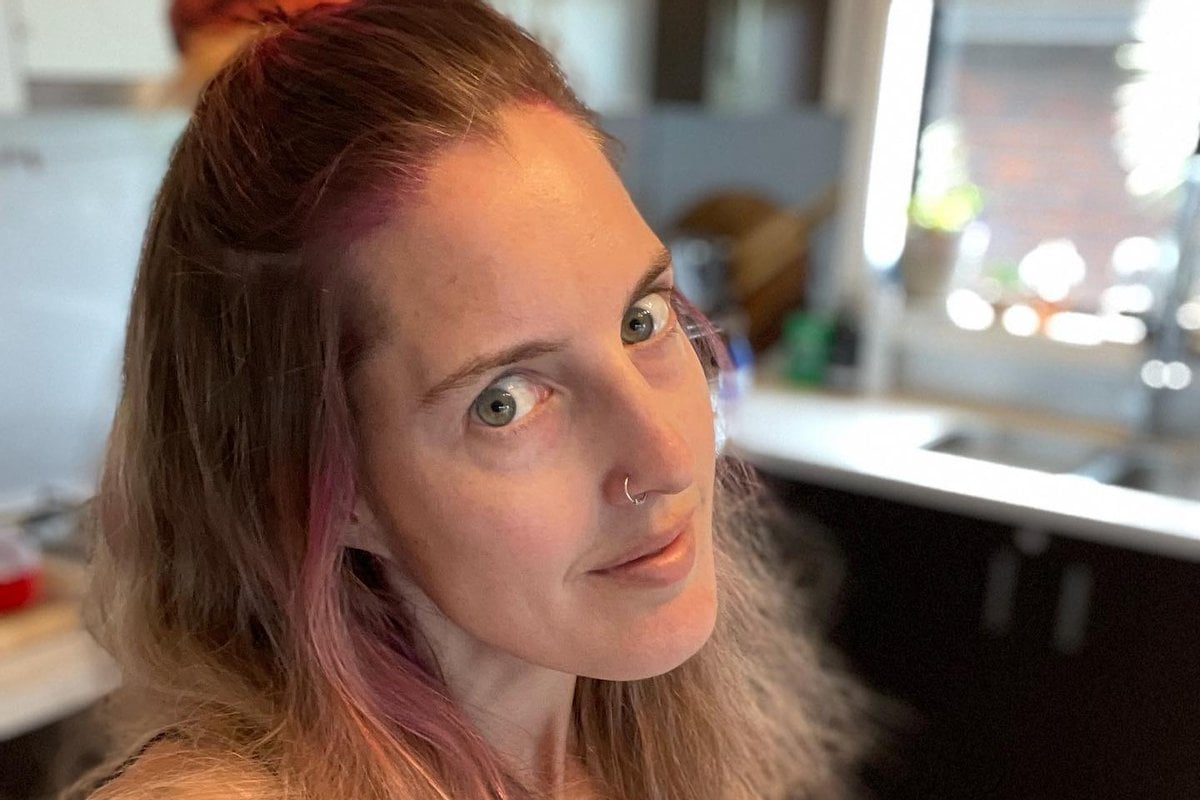 This post deals with eating disorders and sexual coercion and may be triggering for some readers.

I couldn’t believe I’d found myself in this situation: seven months pregnant, crouched on my bedroom floor, as my partner desperately tried to remove a sex toy, which was temporarily ‘lost’ inside my body.

It could almost be laughable, except I was hysterical.

After a few minutes of fumbling, which felt like a few hours, my husband yelled: “I’ve got it!” Yet, even our lucky escape didn’t soothe me. As I stood in the shower, shaking, all I could think was; imagine if I’d had to go to hospital. Imagine if the vibrations had, somehow, hurt my unborn baby.

Watch: How to have better sex. Post continues below.

At that moment, I realised I wasn’t coping as well as I thought - not with the pressure of juggling a career and my children, but the inner pressure of ‘bouncing back’ in the bedroom.

Like all millennials, I was raised on a cultural diet of sexual empowerment. Sex and the City taught me how to be single and own my desires. I got sex tips from magazines. Sexual fluidity became trendier than monogamy.

In my early twenties, I wrote a tell-all memoir about how I used sex as therapy after the death of my first husband. I have been a poster woman for promiscuity, writing about my sex-capades and road-testing vibrators for articles.

But, none of it prepared me for sex after motherhood.

I’m not about to say having children ruined my sex life - that belief is outdated and the data doesn’t support it. It can, however, put it under pressure.

More than 40 per cent of mothers are having less sex as a result of the pandemic, according to the Mother.ly State of Motherhood Survey.

The inability to spend time one-on-one with partners ranks as the number one overall relationship tension for mothers.

Motherhood coach Amy Taylor Kabbaz, author of the book Mama Rising, is an expert on ‘matrescence’ - the physical, emotional, hormonal and social transition to becoming a mother. She says the pandemic has increased the ‘inner split’ we feel as mothers - the pull between your children’s needs and your own desires.

Nowhere has this been more obvious than my sexual identity.

The problem is, when we warn mothers-to-be about the changes they’ll go through after childbirth, it’s on a very basic level. You might feel differently about your body. You might need more lubricant. Your nipple might be sensitive (or numb).

For me, these were true, but it wasn’t really the core issue.

The changes in your sexuality are far more complex and nuanced, and it isn’t all negative. In fact, since having children I’ve connected with my body in a whole new way - and that has some sexual side effects of its own.

When my first child was born, five years ago, our sex life remained very ‘Samantha Jones’ in the short term.

Sleep deprivation didn’t hit for a while. During paternity leave we had a lot of free time and I’d had an ‘easy’ labour, so by 12 weeks postpartum, I was eager to get reacquainted.

In my teens and early twenties, I had struggled with an eating disorder.

In contrast, pregnancy, for me, was a very positive experience. I liked my extra curves and found peace in my body. However, I started to question my own sexual narrative.

Motherhood is a very introspective time, especially when you have a daughter - a tiny, innocent version of yourself.

In the last five years, I’ve had three children in total (currently, 1, 3 and 5-years-old) and, with each baby, I’ve gained a new perspective on my past.

I’ve had sex for a lot of reasons in my life; for pleasure, as a distraction, for power, to please someone else, to please myself, out of grief and out of guilt (during my eating disorder, I would have sex after drinking to try and burn calories.)

Listen to Mamamia's podcast for parents, This Glorious Mess. Post continues below.

After motherhood, certain memories started to come up. As a teenager, saying “yes” to my then-boyfriend after saying “no” five times because the car doors were locked.

In my twenties, sobbing on my wedding night, because my husband couldn’t perform due to his terminal illness.

In the months afterwards, sleeping with anyone rather than sleep alone.

Suddenly, I found myself triggered by sex or, worse, saddened by it.

My husband, the father of my children, was confused when my libido took a dip - and who can blame him?

It wasn’t as simple as explaining, ‘I need sleep and a good lubricant’. How can you explain that twenty years of sexual education are unravelling in real time?

I’m not the only mother to find myself in this space. With my closest mum friends, sex is a hot topic of conversation, discussed like first-timers rather than adults who’ve birthed humans.

Our honesty bonds us, but it also breaks my heart to hear how ‘not enoughness’ is entering our sex lives.

We know we’re having less sex than our childless selves. Our partners are feeling neglected and we want to make them happy. We also, however, want to honour ourselves - perhaps for the first time in our sex life since puberty.

Looking back on my sex life, it feels like watching a movie made in the seventies.

I still have a lot of amazing memories in my ‘sexual movie’, but there are scenes I wouldn’t like to repeat.

I also want to be a good role model to my children (both my two daughters and my son).

I was educated in the Catholic School system with a lot of shame around sex, so I never want my children to feel that way. But, my desire to be seen as sexually empowered came with its own trappings - sometimes, the inability to say no.

Recently, a female colleague of mine, who’d had a son six months earlier, found out her partner was active on an app where you can become part of a ‘throuple.’

When she confronted him, he acted shocked that she felt betrayed. He thought she wouldn’t mind, because ‘you always say you’re sexually enlightened.’

Initially, she felt guilty for not being open enough, then she felt angry. “I felt like my sexuality had been thrown back in my face,” she said. “I do like to experiment, but I also want to be able to have boundaries, even if it means I’m not as wild as I used to be.”

I’m lucky that in my friendship group we talk about these topics, which helps us to navigate the speedbumps.

I wonder how many marriages break down, because sex is only discussed in terms of choosing a position or not waking the children.

For me, the starting point is more honest conversations between both parents, not just mothers.

A post shared by AMY • Storytelling for Healing (@amy_molloy)

We need to explore sex as if it’s our first time; set new boundaries and get honest about our preferences. It’s okay to grieve a sexual trauma, which happened decades earlier, because you didn’t realise it was a trauma until now.

In my relationship, sex after children is an experiment in progress.

It’s easy to blame time-poverty for the weeks we don’t connect sexually, but there’s usually a deeper, emotional trigger.

I refuse to believe that children ruin your sex life, but we do need to acknowledge the shifts and emotional triggers. The truth is, I am more sexually ‘sensitive’ now — I can be easily turned on, but easily turned off too.

I want my daughters to grow up knowing that sexual empowerment is fluid.

We need to stop talking about sex after children and, instead, talk about ‘sexuality’ - the capacity to feel sexual. Then we can stop seeing our changing desires as a failure, tune into our turn-ons and really respect this body which birthed life.