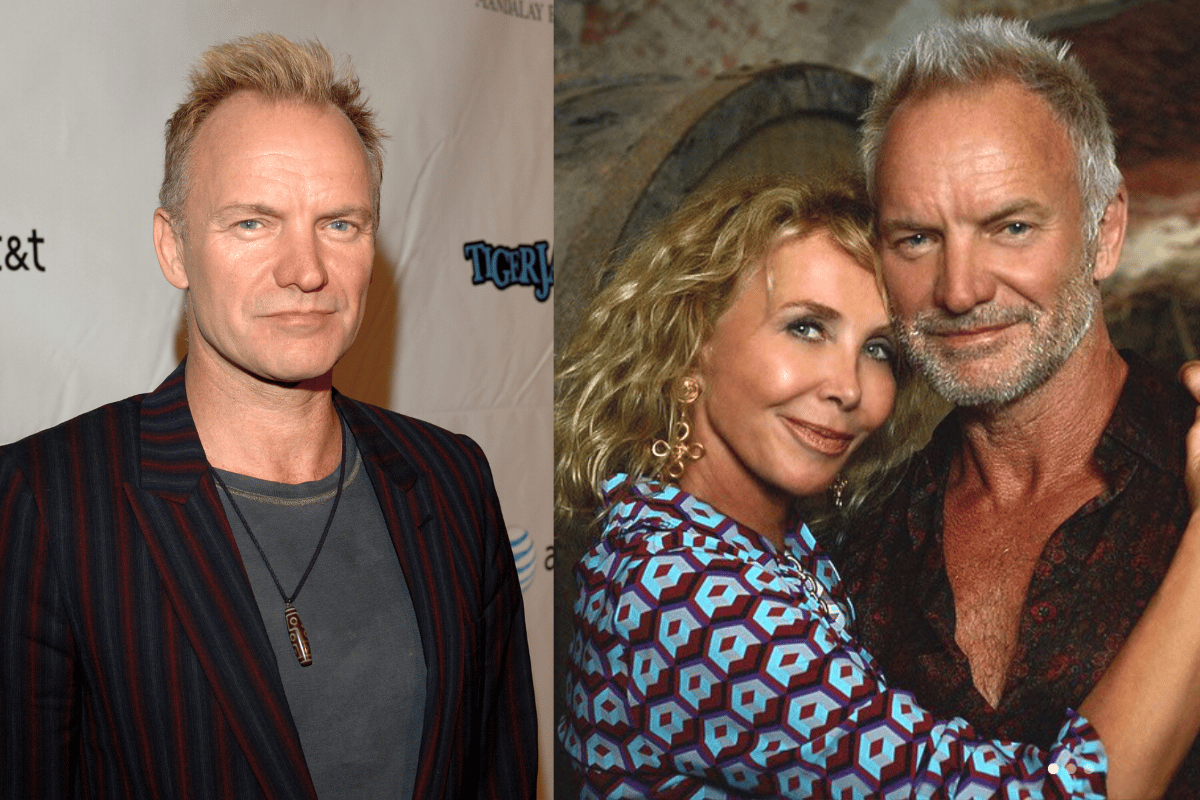 Sting was undoubtedly a rock (and sex) icon throughout the '80s and '90s.

But the lead singer of British rock band, The Police, is also known for his complicated relationship with Trudie Styler. Why? Well, because of how they met.

And with that messy introduction comes a particularly bright spotlight on the couple. So let's see how their relationship unfolded, and where the two stand today, 45 years after they first met.

In the early days, Sting was known by his birth name - Gordon Matthew Thomas Sumner.

Growing up in a strict Catholic family, Sting was a music enthusiast from a young age.

His mum, a hairdresser, and his dad, a dairy shop owner - according to Sting himself, money was tight. Although he says that if he could go back and change it, he wouldn't.

"Childhood made me who I am, and I'm quite happy with who I am. Without my childhood, something else would've happened," he later reflected. "But as soon as I saw that guitar I realised I'd found my route out, my best friend. I just played the guitar, and I saved up for other strings."

After a brief stint at university, he decided to work and make some money for himself.

He performed a bunch of odd jobs - a bus conductor, a tax officer and a building labourer. Sting then decided to study education and was a qualified teacher for two years, while performing jazz in the evenings and weekends.

It was during his early musician days that he got the nickname 'Sting' - it was given to him by one of his bandmates because he used to wear a black-and-yellow-stripped sweater while performing.

Around this time, Sting had met, fallen in love and wed his first wife Frances Tomelty, who is an Irish actor. Over the following years they had two children - Joe in 1976 and Fuchsia in 1982.

At the time Sting said about Tomelty: "She transformed my life and was a catalyst in my becoming something completely different."

Then in the summer of 1977, Sting met someone new. Her name was Trudie Styler.

She was a neighbour to both Sting and his wife - and was her best friend. Tomelty and Styler had earlier met while acting in a play together and hit it off.

The first time Styler saw Sting, he was walking down their street and had green hair. "I thought 'I fancy that guy with green hair'," she told The Guardian.

It was also around this time that Sting had formed English rock band The Police, where Sting was the bass guitarist and lead singer. Only a year later would The Police sign a record deal, leading the band to become a global phenomenon. 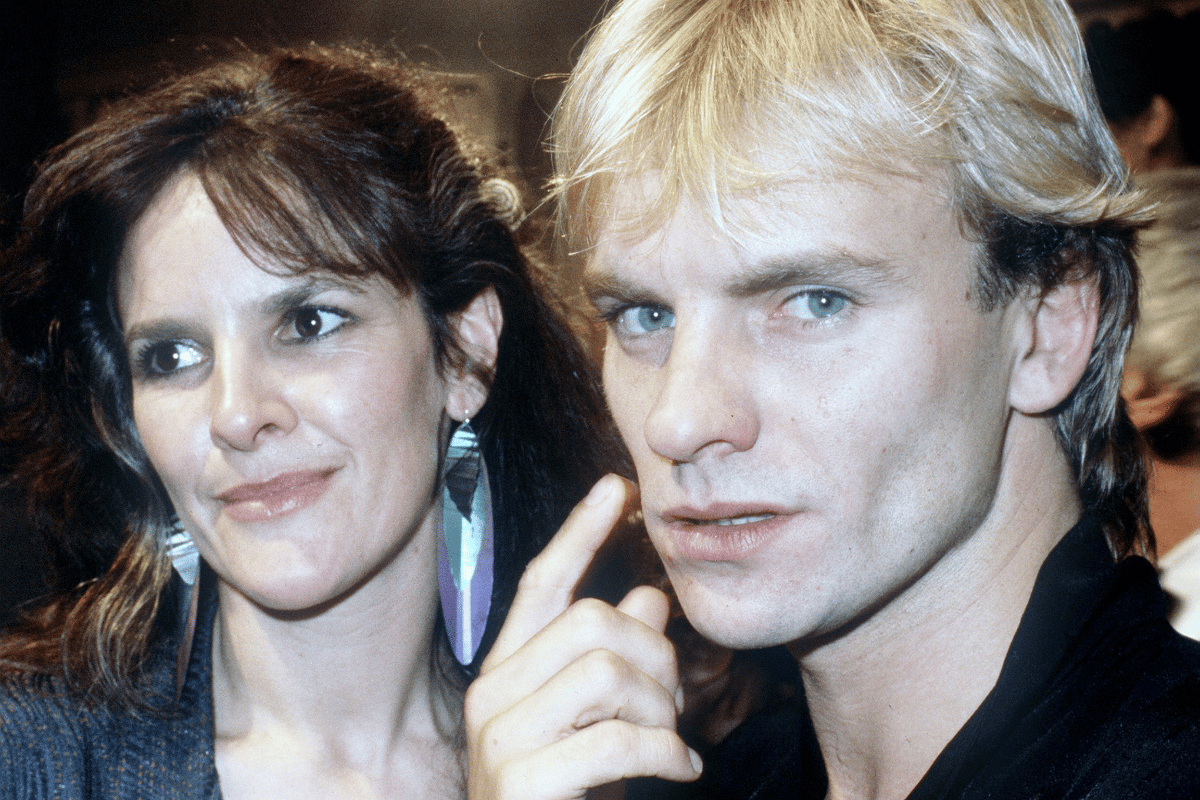 Sting and Frances Tomelty. Image: Getty. In 1981, things got murky.

Styler and Sting had begun an affair. By 1983, Styler was pregnant with Sting's child.

In the same year, things were going very well for The Police, with hits like 'Roxanne', 'Every Breath You Take', 'Every Little Thing She Does Is Magic', and 'Don't Stand So Close To Me'.

With this in mind, the band was about to embark on a world tour. But Tomelty wasn't going on the road with her still-husband Sting. Instead, Styler went on the road with The Police up until she was eight months pregnant.

Neither Styler or Sting have spoken much about what happened during the period of their affair or Sting's divorce.

It wasn't until 1984 that Sting and Tomelty divorced.

"It was the least ideal situation you can imagine. Neither of us are proud of a situation that happened - it just happened. We loved each other, and we lived together and then we got married and we had more kids. And that's our life story."

Styler gave birth to the couple's daughter Bridgette Michael 'Mickey' in 1984, and the pair went on to welcome three other children - Eliot, Jake and Giacomo.

In his autobiography Broken Music, Sting said that it was when he first met Styler back in 1977 that he fell in love.

"Her eyes are a pale, pale green and across her left cheek is a whitened strip of scar tissue that curls like the violent memory of an animal claw around the socket of her left eye. Strangely the scar in no way detracts from her beauty, because she looks to me like a kind of damaged angel."

As the years went on, so did the rising success of The Police.

The group eventually disbanded in 1986, but has reunited for special occasions. Globally, they were one of the best-selling bands of all time and sold over 75 million records.

Sting continued recording and touring as a solo performer to great success too. And throughout his career, he has also been a major activist for human rights and the environmentalism movement. He has taken part in Amnesty's human rights concerts over the years, joined Band Aid, founded the Rainforest Foundation Fund and is a patron of the Elton John AIDS Foundation - just to name a few.

And recently, he re-wrote his song 'Russians'.

The song was released in 1985 as part of his first solo album and was a piece of social commentary that criticised the Cold War, the foreign policy associated with it and the doctrine of mutual assured destruction.

Two months ago Sting wrote on Instagram: "I've only rarely sung this song in the many years since it was written because I never thought it would be relevant again. But, in the light of one man's bloody and woefully misguided decision to invade a peaceful, unthreatening neighbour, the song is once again a plea for our common humanity.

"For the brave Ukrainians fighting against this brutal tyranny and also the many Russians who are protesting this outrage despite the threat of arrest and imprisonment - we, all of us, love our children. Stop the war."

It's something that Styler is passionate about too, standing up for issues she feels strongly about.

"My mum was very vocal about justice and what she thought was the right thing to do," she said. "I'm lucky enough to have some celebrity light around me. I can go on a platform and say what I think to represent these voices that can't be heard."

As for what life looks like now for the couple, Styler is 68 and Sting is 70.

Their kids are all grown up too, but they won't be expecting any inheritance from their well-off dad.

"I told them there won't be much money left because we are spending it! I certainly don't want to leave them trust funds that are albatrosses around their necks. They have to work. All my kids know that and they rarely ask me for anything, which I really respect and appreciate. Obviously, if they were in trouble I would help them, but I've never really had to do that. They have the work ethic that makes them want to succeed on their own merit."

So with that in mind, Sting has continued to make music, tour, travel with his wife and he and Styler are now winemakers too.

The couple have been married for over 30 years now, and when asked about what has kept them together for so long, Sting said a lot of it comes down to fate.

"I know something about marriage. I've been married to Trudie for years now. People say to me, 'How has it lasted this long?' I say, ‘'Well, it's kind of a miracle, but we don't take it for granted'," he said to PEOPLE.

"We're friends, too. We love each other, but we actually like each other - and that's an important distinction there. Love is passion and all of that stuff, but actually liking somebody and enjoying someone’s company is something slightly different, and it lasts longer. So you can have both, and I think that's important. Be married to your best friend."

Reply
Upvote
2 upvotes
Justifying cheating-- as opposed to honesty and a respectful split-- on the "true love" excuse is tantamount to using betrayal as a means to promote one's own super special capacity for "wuv." It's like robbing a bank and demanding to be made chief financial officer because of your super special fiscal acumen.