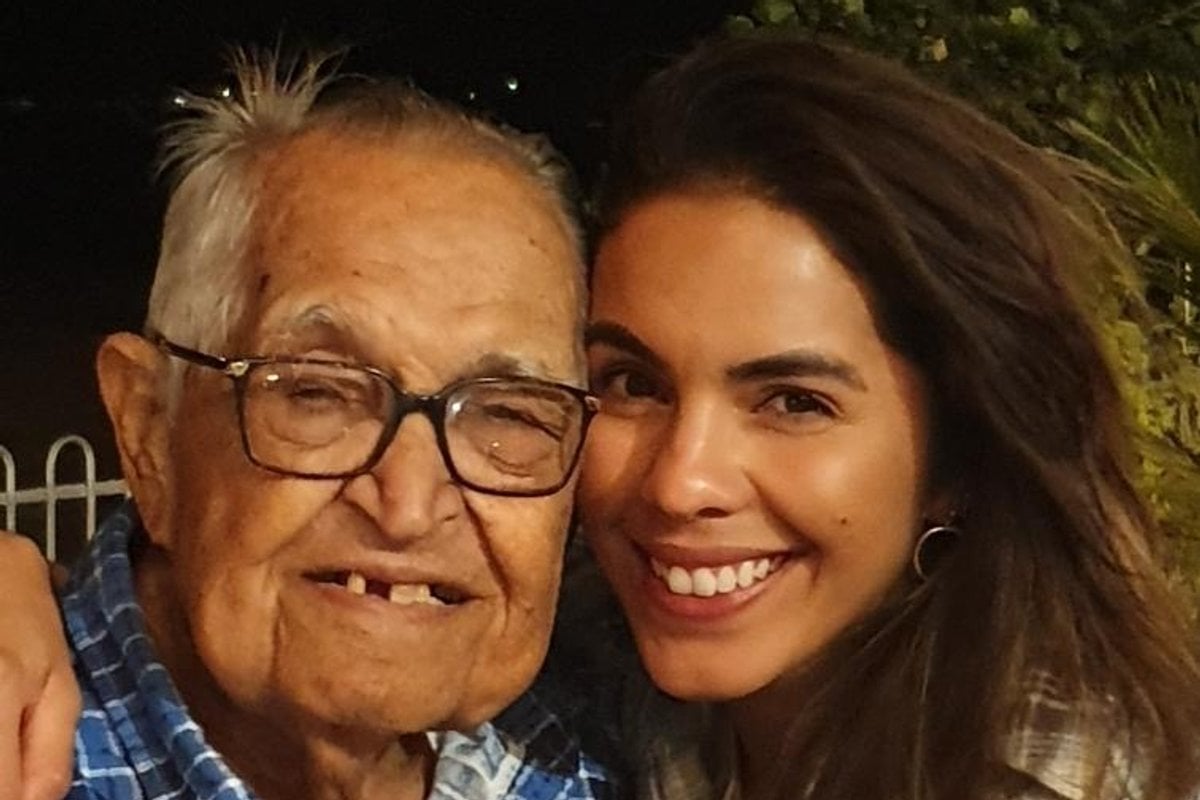 Like many people, television host and fitness instructor Megan Waters has a love-hate relationship with the effects of the pandemic. On one hand, she was stuck in a seemingly endless loop of lockdowns in Melbourne last year and missed out on several key experiences in her first year as co-host of NITV’s AFL show Yokayi Footy.

On the other hand, she had time to recalibrate and focus on her goals. Most importantly, she was able to spend four months in 2020 and another two months at the end of last year in her home city of Darwin, in Larrakia Country in the Northern Territory. She got to have quality time with friends and family, including her favourite person in the world - her grandfather.

The 33-year-old becomes emotional as she speaks about her grandad, who is from the Stolen Generation. “He’s really unwell. It's pretty raw at the moment. He’s the king of our family. He is an extraordinary human. And he’s lived such a full, humongous life,” she tells Mamamia.

“He's 92. Well, he likes to think he’s 92 and we let him have that,” she continues with a watery laugh. “But he was taken away from his mum around the age of four from the Tennant Creek region. They were never reunited. I can’t even fathom what it would have been like for him growing up without love, removed from his culture, traditions and family. I think about how painful it would have been for his mum. So much trauma.”

Listen to The Quicky podcast "Where Are The Stolen Generation Now?" Post continues below.

Waters is glad to see that education around what happened to her grandfather and others like him is slowly being taught in schools, something she never got to experience. “I didn't learn about this in school, I had to go out of my way to learn about this. And I mean, obviously, it's in my family, which is why there's an awareness for me. But if you're a white person growing up in Australia, there's going to be this confusion and limited understanding and lack of awareness about the issues Indigenous people are still faced with.”

The Stolen Generation is a stain in history that has barely begun to heal.

“When you hear words like "intergenerational trauma”, [the Stolen Generation] is exactly where that stems from. It’s such a painful part of our history,” she says. “My grandpa is my connection to culture and family and history. My favourite part about being home is him, so it will definitely be very different without him around. I'm so fortunate that I have been able to be by his side, holding his hand and listening to his stories.”

[Just days after this interview, Waters’ grandfather passed away.]

Not only is Waters determined for her life to be as full as her grandfather’s, she’s also committed to advancing the rights of Indigenous Australians. It’s one of the reasons her role on Yokayi Footy means so much to her and why she's looking forward to her upcoming second year as co-host.

“I'm so grateful to work on a show like Yokayi, where it's all about celebrating us, our culture, our mob, our stories,” she says. “To have a show that, of course, the basis of it is about football, but it's got so much more heart. I'm proud to work for a show that amplifies us.”

Waters’ love of footy comes from her father, who died in 2014. “When I was a kid, he took me to a game down at one of our local stadiums. It was the first time I've ever really been in that sporting environment. And I just remember being in love with it from that point on.”

Throughout her teen years, she watched friends and cousins play the game and even though she “dabbled” in the sport herself, she never took it more seriously because there wasn’t an emphasis on AFL for women at that time. “Sometimes I look back and think it's such a shame because had AFLW had the kind of drive that it does now, I would say I'd probably still be either playing footy or I would have been in the footy environment much earlier on,” Waters admits. “But it's so good to see that there is so much more of an emphasis with women footy now over the last five years.” 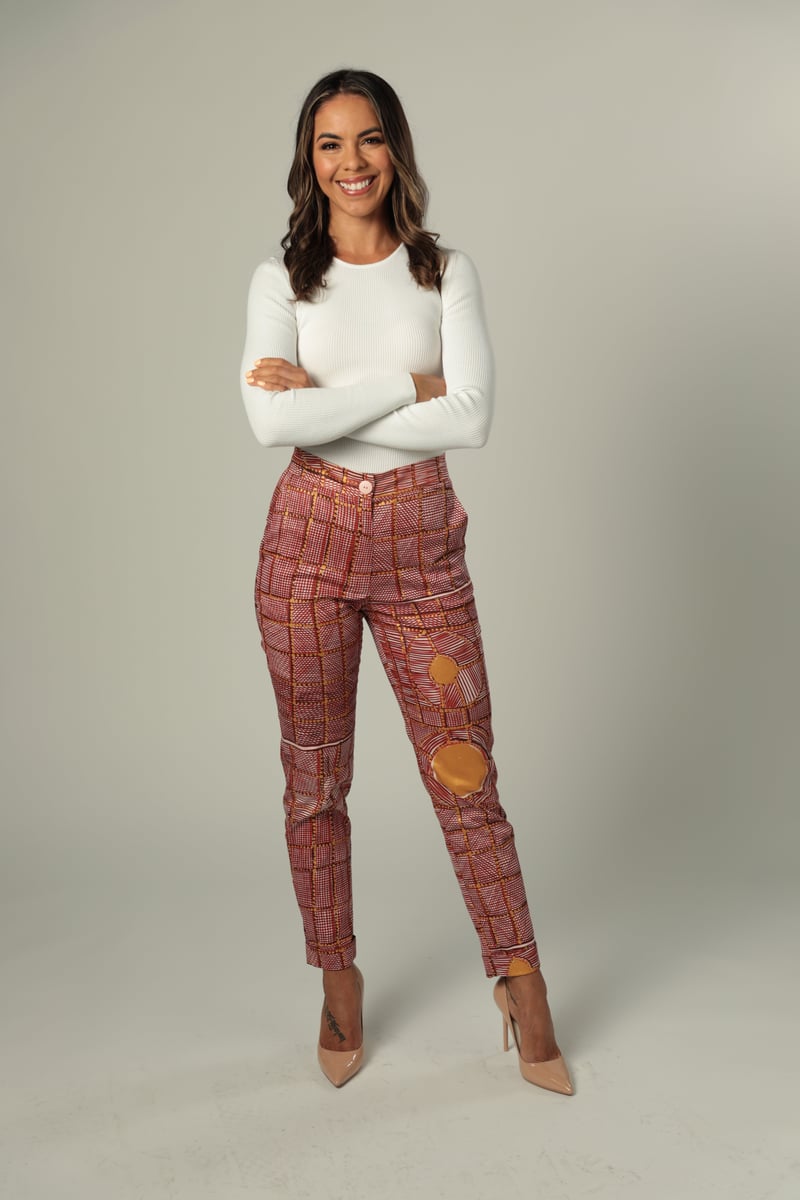 Yet there is still so much more work to be done. “There's a lot of talk around the word 'representation' at the moment. And I think it's just so important that we see women, Indigenous women particularly, in the media space,” she tells Mamamia. “Growing up, I don't remember seeing Black women in media. I just remember admiring Indigenous athletes like Cathy Freeman and Nova Peris. It was seeing women like that on screens that inspired me. That’s a huge part of the reason that I grew up so sport-obsessed.”

Coming from a blended family - her mum is Indigenous and her father was white - Waters grew up in the 'middle ground'. She didn’t understand her place or where she really fit in. “I had predominantly white friends at school and there was a lot of casual racism and stuff - there still is - but I just didn't really know how to fully embrace myself as a whole person, Black and white.”

It was the 2012 The Sapphires movie, which is about four Indigenous women who form a singing group, that inspired her to embrace her heritage and identity. “It was the first time I really saw Indigenous women represented on the big screen. I remember going to the opening night for the show, and I was just so proud. I saw a part of me reflected in them,” Waters says. “Seeing them up there looking like me, I thought, why can’t I do that too?” 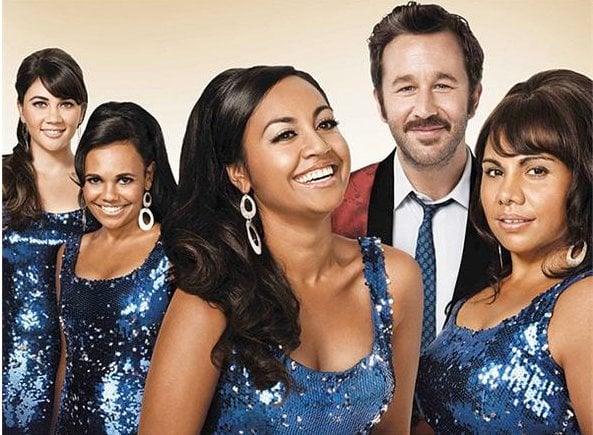 That doesn’t mean things have been easy for her or those who came before her. “As a woman of colour, you’re always fighting to be up on the same level as everyone else. You have to do more and be better and push harder, because you're not only a woman - you’re a black woman. There’s that discourse between those who are Indigenous versus non-Indigenous. But the narrative is shifting. We are progressing very slowly.”

It is Waters’ hope that she inspires her nieces and nephews to look up to her so they can see the world is full of opportunity. Yes, it may be harder because they’re Indigenous but the opportunities are still there. “A big goal for me is to mentor young Indigenous women and men in the wellness space because I think when you can harness the power of your mind and control it, good things come about,” she says. “I’m a great example of that.”

Yokayi Footy airs on NITV on Tuesday March 15 at 9pm before moving to an ongoing time-slot on Wednesdays at 8.30pm for the remainder of the season.

Want to have your voice heard? Plus have the chance to win $100? Take our survey now.

A
anonymous 2 months ago