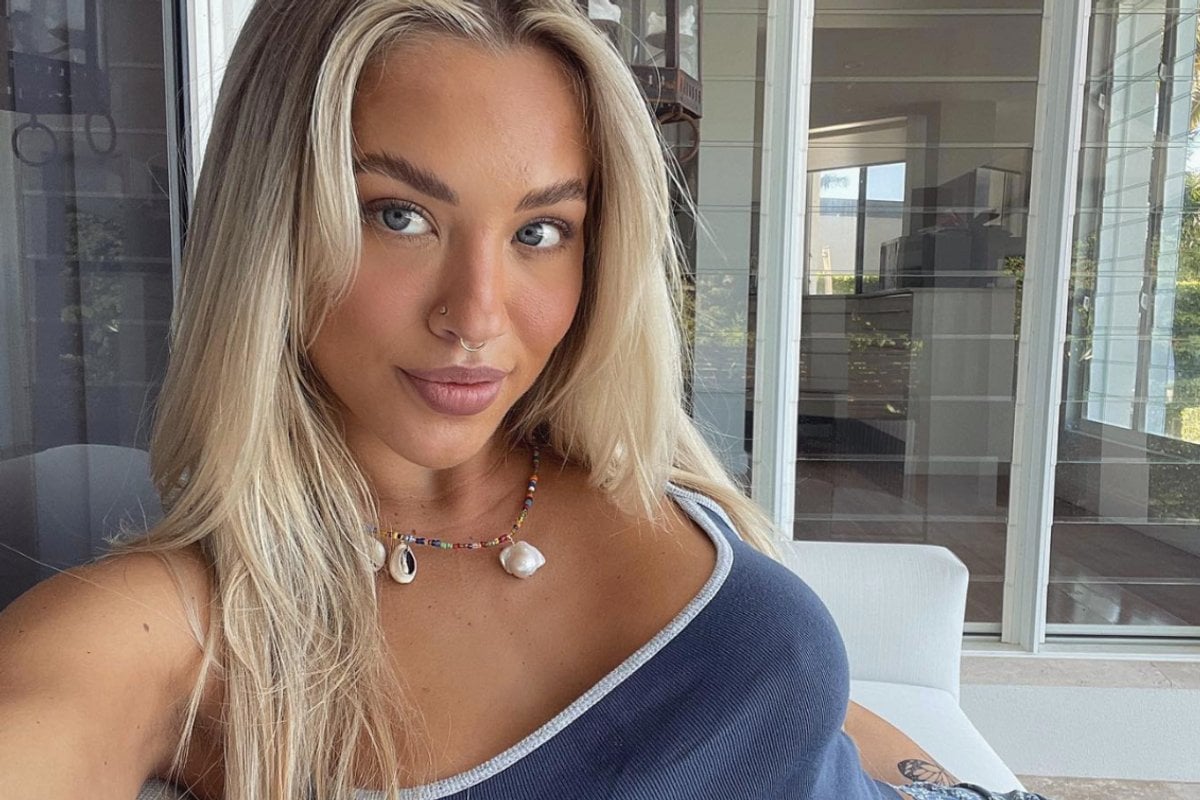 The majority of Aussie Instagram users would have heard the name 'Tammy Hembrow'. And there's a good reason why.

Hembrow is considered one of Australia's most successful influencers. The 28-year-old has over 15 million Instagram followers and has a strong legion of fans who go nuts over her workout content, her fashion, and her children.

But she's also a business owner too - founding an online fitness app Tammy Fit and a clothing brand Saski Collection - all of which combined have given her an estimated $38 million fortune.

But according to Hembrow herself, she wasn't always this financially successful.

This week, she shared how she came from "humble beginnings" in rural Queensland - and that it was $400 in her pocket that gave her the push to start something new.

Watch Social Squad: Behind the lives of influencers. Post continues below.

Tammy Hembrow grew up in Currumbin Valley near the Gold Coast and went to primary school with no more than 80 students in total.

"We did not have a lot of money. We didn't live in a house, we lived in an old wedding reception facility. We made the walls out of tables and blankets. The bath was outside too. My dad called it 'an adventure'," she shared on the How I Made It podcast.

In high school, Hembrow decided to live with her mum - Hembrow's parents separated during her childhood - who was living in Singapore.

"It was the complete opposite to how I had been living. My mum's partner, my stepdad, was extremely successful and was living a big life of luxury. I had never seen it up close, only ever in movies. It was the first thing that inspired me to be successful in whatever I was going to do."

Hembrow later returned to Australia where she did a Bachelor of Business on the Gold Coast. But from the very start of her first lecture, Hembrow hated it. She knew it wasn't right for her.

"I was good at doing the work, but I didn't feel like I was actually learning anything. It wasn't until the end of the degree and I had a unit on entrepreneurship that I knew that was what I wanted to do. It was the only class that made sense to me," she said. "I decided I would be my own boss, do it myself, and I left uni."

At this point, Hembrow was already slowly starting to build a following on social media.

But when she started to document her pregnancy and motherhood journey at 20 years old on Instagram, her following increased dramatically. It was a far cry away from the people who had once told Hembrow that falling pregnant was the worst thing she could do for her career.

"People said to me, 'Oh, your life is ruined now'. All these negative things were being said. But I wanted to make people see the opposite of that and prove them all wrong. I wanted to show that I could still do everything I wanted to do while being a young mum," she said.

The 28-year-old is now a mum to three kids - son Wolf, seven, daughter Saskia, six, and baby Posy, who is a few months old.

Hembrow knew that marketing was an incredibly important tool when building a business - and what better way to self-promote a business and profile than by creating an engaged audience on Instagram.

"I had so many different ideas. I was in the gym training all the time and I wanted to share that with people and make this into a profitable business," she shared on How I Made It.

She started out by offering fitness programs that she designed herself to her Instagram and YouTube followers.

"My initial investment was about $400, which I spent with someone to illustrate the exercises on the programs I was making. So the illustrator drew up the professional shots, and it eventually evolved into Tammy Fit the app."

She then used all the money she had accrued from selling the programs as well as her influencer promotional posts to design the app, which was a large initial investment. But Hembrow knew it would pay off.

The Tammy Fit app charges users around $100 a year for a subscription - and given the fanbase it has, it's had a great uptake with millions of users around the world.

When her daughter Saskia was born, Hembrow and her sister Amy decided to create their own activewear label - Saski Collection.

"I was promoting and wearing other people's activewear on Instagram and I thought I should be wearing my own activewear brand - I thought it could marry my two passions, fitness and fashion."

Of course, there have been some bumps along the way. And as Hembrow said, every mistake has been a great learning curve.

When she and her sister accidentally over-sold their first activewear collection drop for Saski Collection, Hembrow jumped on the phone and called as many people as she could on the hundreds-strong purchaser list. It wasn't a great start, but she knew that if she directly spoke to the customers, and offered them a choice of a refund or to wait for an order, it would build a level of trust.

"I didn't want people to be upset. This is the first impression people get of my business, and I wanted it to go well. Everyone was so nice about it, fortunately."

With the businesses growing consistently, Hembrow has said it's all about having a great team around her to lift everyone up. As she noted in a profile interview with Afterpay, being able to let go of the reins and delegate has been a lifesaver.

"I have a great team at Saski Collection and Tammy Fit. I couldn't keep track of what was happening with the businesses without having good people in place. And I love to see what people can achieve when they're given the chance," she said.

Reflecting on all that she has built for herself and her family, Hembrow said that she has always dreamt of being 'successful'. It was just about putting it into action.

"With my brand and career I focus on so many different aspects, whether it's fitness, fashion or family," she said.

"These passions are something I've always wanted to drive my career early with, and I think making that decision early on has allowed me to pursue different avenues in my professional career, which is so fulfilling."