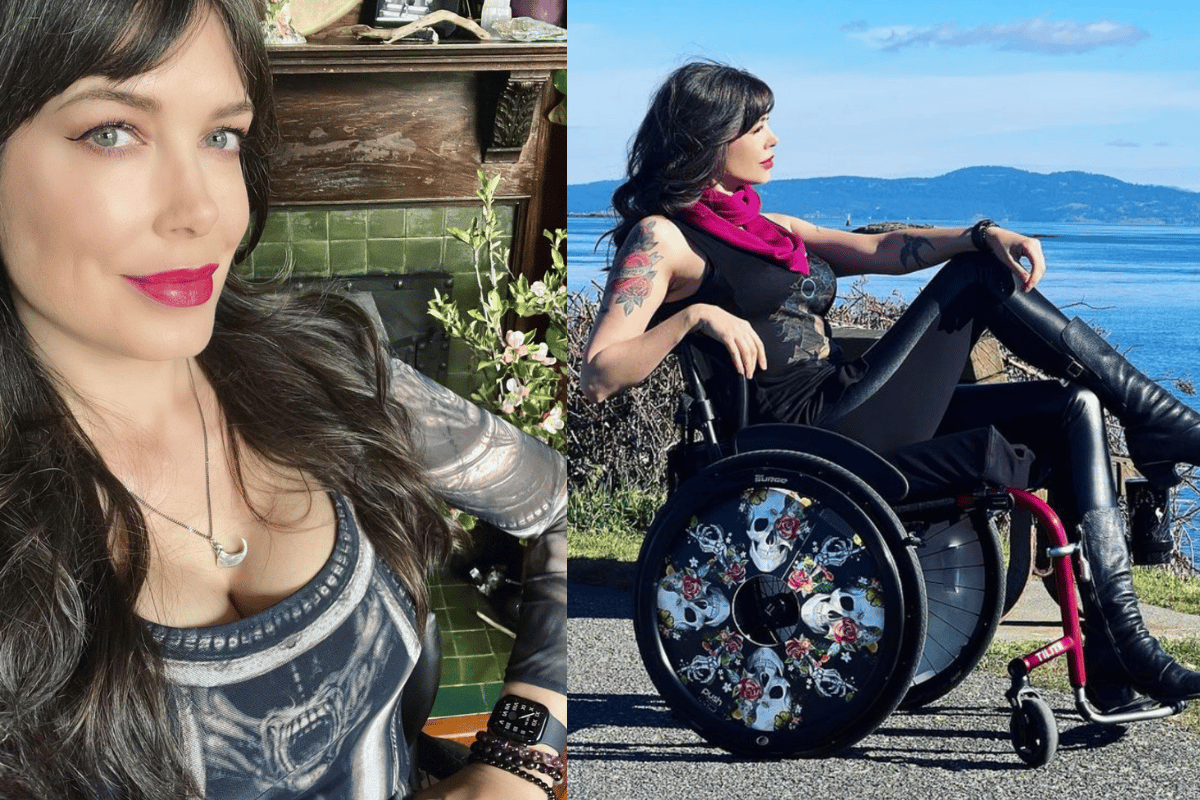 Author and disability advocate Tara Moss has been living with one of the world's most painful conditions for six years now.

Moss has been through countless transitions in her life. It includes her modelling and catwalk life, her pivot to writing novels and becoming a highly respected author, becoming a mum, her trauma of sexual assault and being diagnosed with a serious pain condition. Simply put, Moss has experienced a lot.

As she said to Mia Freedman on Mamamia's No Filter podcast: "I've had many lives within this lifetime. It sounds strange, but I really have had big changes - some changes I've wanted, sometimes really not. Life throws stuff at us."

And it completely changed her life as she once knew it.

"It's complex in name, because it's complex in nature," she explained. "It generally involves a lot of different systems in the body, but the characteristic that defines it the most is pain. It's generally given the title as being the most painful disease that is known. I don't know if we can really put labels on things and it is problematic to compare pain, but it is extremely painful."

For Moss, she feels the effects throughout her body, describing it "like a cold fire". It began in her right hip, spread up her right leg and has now spread up the right side of her body, including her face and right arm.

"It's like having your body in a bucket of ice that you can't get out of. But it changes all the time and varies in intensity, so every day I'm just managing the pain as well as possible," Moss said on No Filter.

Listen to Mia Freedman's full interview with Tara Moss on the No Filter podcast below. Post continues after audio.

There isn't a great deal known about the condition, especially considering it can't be physically seen. The only real physical thing about it is that Moss uses mobility aids like a wheelchair and a walking stick, as weight-bearing can be a trigger for pain.

As she said, a really good day for her could equate to a "five out of ten level of pain". And that's something so many chronic pain sufferers live with.

Given Moss' disability crept up on her - with the medical community thus far having very little understanding as to how CRPS forms - it wasn't until years into CRPS that she realised her new normal wasn't going to change.

"I am very much a disabled woman and part of the disability community, but it took me a long time to recognise that was the case," Moss said.

"Lots of people have 'invisible' disabilities and they might recognise right away they have a disability - I didn't. I thought, 'my focus is on recovery, this is going to stop'. My focus is still on a type of recovery, but now it's about remission. I know that CRPS is not something that just goes away, but it is something you can get into remission with. But it's not easy to reverse."

For Moss, she wants to talk about this aspect of living with a disability and being diagnosed with one later in life - the feelings of denial and how to manage it all.

"[Denial] actually does more damage than accepting, seeing what's happening and working with it," she said.

As Moss said on No Filter, she shouldn't have to feel uncomfortable talking about her mobility aids or her access needs. And in the early stages sometimes she did - and that was a stage of grief that she had to process.

"After a while you have to accept, well it's been a few years now. This is what's happening - I'm going to listen to that and see what is possible within the body I now live with. I'm through some of it [the grieving process] but not all of it. I still have days where I just want to go hiking like I used to," she said.

"Becoming injured and becoming disabled and having to grieve the previous me - that's like a type of death. I'm very much alive and loving life, but I just can't do the things I used to do and my life has completely changed."

But it's not just the example of hiking that fits. Sometimes, it's the desire to simply get in her car, drive somewhere and walk across the parking lot and get something from the shops. Or when she's wheeling through town on her wheelchair and hits a big set of stairs, realising the place she wants to get to is at the very top of the staircase she cannot access.

"You wonder, how did I get here? How did I get to this moment where I'm facing this obstacle that used to not be an obstacle before?"

For Moss, she said her way to deal with the enormous change has been to adapt - because it's all you can do.

"I can love all those previous selves that are maybe not so present anymore but were with me at one stage. I think we all go through those transitions in life. I just think for me, it's been certainly more outwardly obvious and extreme. I don't shy away from that - the worse thing you can do is not accept what's happening when your life changes."

"I also look at it as a renewal and embracing what is now and accepting that it is not what it was then."

The Ghosts of Paris by Tara Moss is published by Harper Collins and is available now.

Listen to the bonus episode of No Filter where Mia Freedman speaks with Tara Moss about being a romantic, how she met her now-husband, and how she found herself kicked off a dating website.   Exclusive to Mamamia subscribers, listen here.