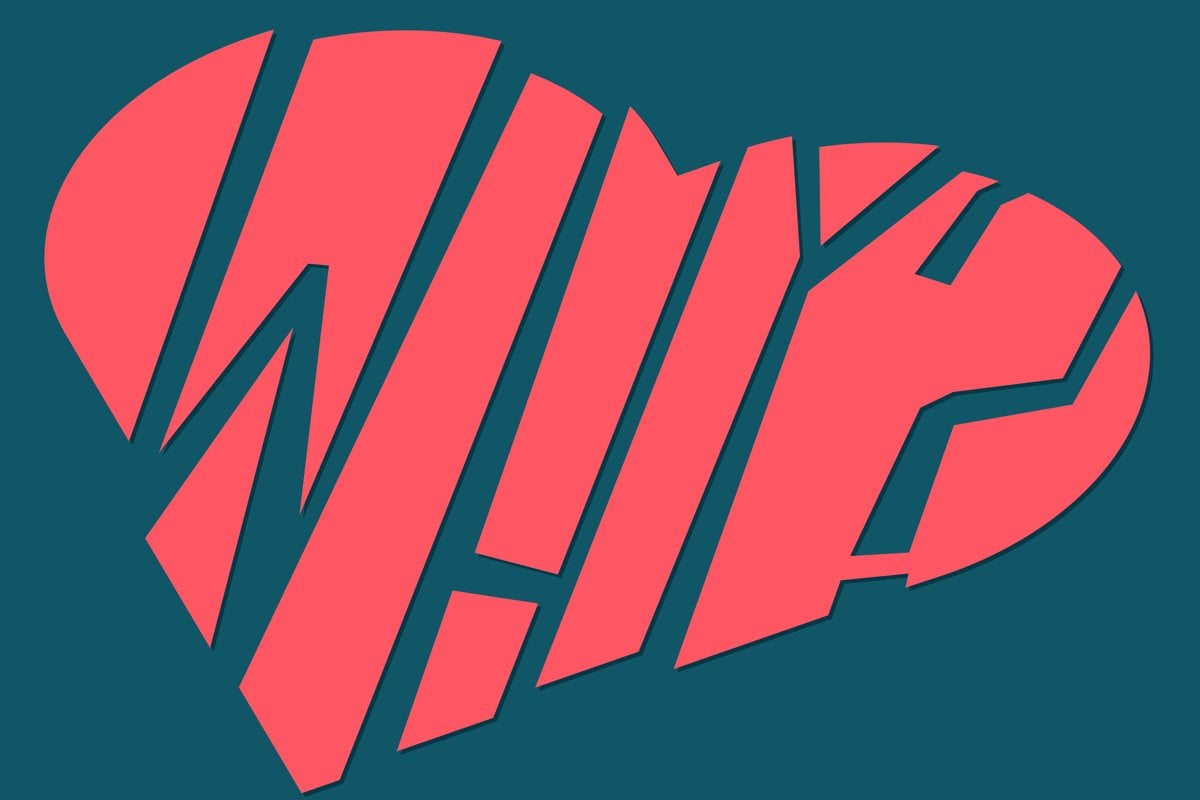 Listen to this story being read by Mia Freedman, here.

Have you ever loved someone who was toxic? Maybe a friend. Maybe a lover. Maybe a spouse. Maybe even a parent. You love them because you have history. You’ve experienced so much together and have so many shared memories. They have some great qualities.

But then, the love begins to curdle. You become aware that your values have become different. Maybe they always were, and you’d just glossed over it.

What’s clear now is that you no longer hold the same things sacred and you don’t agree with the choices that this person is making or the way they are living their life.

For a long time, you think you can work around it. You certainly try. You believe in your heart that this person you loved will see sense and make better choices, and your divergent paths will once again come together.

Instead, they diverge further. You start to see how loving them hurts you. And compromises you. How destructive it is when you love someone more than they seem to love themselves.

And you notice your devastation again and again as they behave in ways you find horrifying. But you forgive them again and again because there is goodwill there. And affection. And an utter disbelief each time they have a chance to turn things around that they can’t seem to stop hurting themselves and everyone who loves them.

Ultimately, though, you have to choose yourself. You must draw a line and say enough. I cannot keep investing more of my emotional energy into this person when they are so intent on self-harm and self destruction. You have to walk away to preserve your mental health.

This is how I feel about America.

I feel like I need to break up with America and I know that sounds absurd. America gives no sh*ts about me and how do you end a relationship with a whole country?

How ridiculous to even suggest it. I just don’t know how else to express my utter despair this week as I look at the distressed faces of American women who just had their rights taken away in an instant.

How can I stop feeling so devastated by what is happening in America when I live so far away?

The feeling has grown ever since the Sandy Hook Massacre, the mass shooting where tiny children were murdered with a machine gun in their classroom and not a single thing happened afterwards.

Sure, there were people who wanted changes to gun laws, including the then President Barack Obama and millions of other Americans. But they weren’t powerful enough to defeat the gun lobby and the craven politicians who sought their support. 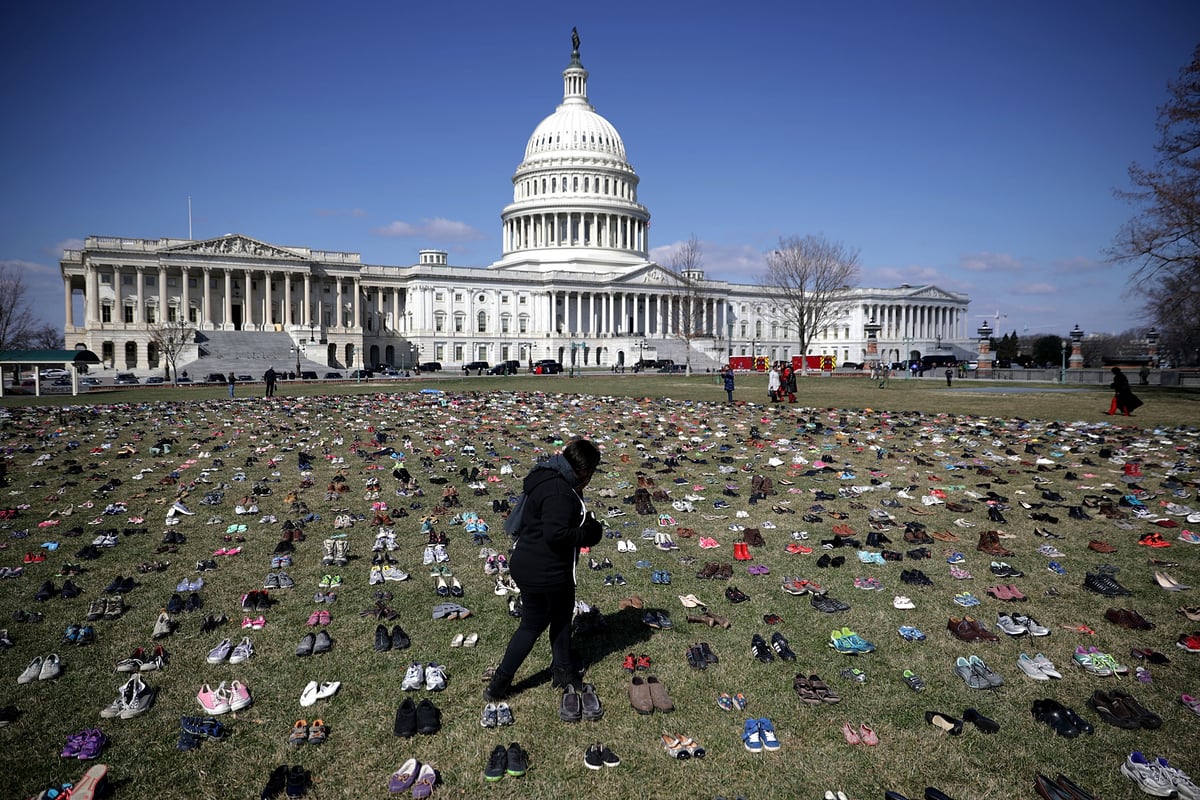 In March 2018, 7,000 pairs of children's shoes were laid in front of the US Capitol to represent the number of American children killed by gun violence since Sandy Hook. Image: Getty.

Next came Trump. And a country who could have elected their first female President, an individual who was accomplished and smart and epically qualified after a lifetime of public and political service.

Instead, they chose to elect a morally bankrupt, narcissistic reality star who bragged about grabbing women 'by the p***y' and then had a d**k swinging contest with North Korea over who had the 'biggest button' and nearly triggered a nuclear war.

When Trump was President, I feel like I lived in a constant state of terror and outrage that lasted four years. I couldn’t look away because it didn’t feel safe to.

The right to buy a machine gun without background checks at age 18 remained more sacred than the lives of children. Again.

And then this week, American women lost all rights over their own bodies. As expected, we have now seen the abolition of abortion rights by the Supreme Court in a 6-3 majority vote.

This verdict was determined by the three extremely religious, conservative judges appointed by Trump - who promised to do exactly this and for exactly this outcome if he was elected.

And America said yes to that. And now it’s happened, and it’s not something that can be overturned by some new judges because a Supreme Court appointment is for life and Trump’s appointees were deliberately young and will be there for up to four or even five decades, making rulings just like this one.

The reality show president has impacted the lives of millions of American women for generations. Next, they are likely to overturn the legal rights of gay people, ban same sex marriage and, very possibly, contraception.

The decision to ban abortion now puts America in the same category as North Korea, Russia and Iran when it comes to the rights of women to choose when and if they have children in 2022.

And I think I’m done.

I’m done caring more about America than America seems to care about itself.

There is so much to love about America. Like so many Australians, I was raised on American pop culture - my movies, my TV shows, my books, my music... most of it came from America. Still does. They have been strong military allies to us during times of war, and we have needed them. Still do.

And yet here we are. The system is rigged. It’s maddening.

Sometimes, I have to remind myself that I don’t actually live in America. That in my country, it’s not a crime for women to access healthcare and it is not possible for an 18-year-old kid - or anyone - to buy a machine gun.

But I’m exhausted. I’m exhausted at the way America drags the world through its relentless news cycle of dead children and mass shootings and now the complete subjugation of women in a way that takes them back to the 50s in terms of equality for women.

Maybe I’m late to this idea of detaching myself from America.

Over the weekend, my group chats were blowing up with anguish about Roe, but when I went to Australian news sites or watched news programs, this story was waaaay down in the mix, signifying that not many people here were engaging with it.

Is that because they are better at reminding themselves that sometimes, what happens in America is unique to America?

It’s almost like when you’re little, you think your parents are perfect and omnipotent and as you grow older, you realise they’re actually flawed and human. There’s a disbelief for a while before the acceptance comes and they move from the centre of your life where they once held pride of place in your heart.

I have close friends who do live in America and I don’t know what to say to them. I cannot imagine the anguish of your country turning against you like this.

I’m aware what a privilege it is to be able to write about breaking up with a country when it’s not yours. Americans who are as appalled as I am by the gun laws and the abortion ruling and Trump don’t have the luxury of walking away or even looking away.

They are American and it must cut even deeper to have the country you love so egregiously represented by laws and Presidents you are so opposed to.

I’m also aware that America doesn’t give two sh*ts about me, so this whole exercise is ridiculously self-indulgent.
But my anguish is real. And maybe yours is too.

So what to do? Gloria Steinem has reminded us this week that even though she lives in a state where abortion is not illegal, 'Until all women are free, none of us are free'.

I guess this means that as incensed and exhausted by America as I feel; I owe my sisters more.

From the safety of a country where my rights aren’t currently under threat, I will continue to fight for the rights of all the women who just lost them.

While at the same time, I will try to distance myself emotionally from a country that has moved so far from the values I thought we shared.

G
goldy a month ago

Reply
Upvote
1 upvotes
Just as women in America never thought this could happen we should not take freedoms and rights  for granted anywhere. As history has shown if we disengage especially in times of hardship things can flip to the worst right before our disbelieving eyes. Lets hope for a safe, free, stable and kind world as one would only hope we would have found ourselves in by now.
B
bowerbird a month ago

Reply
Upvote
2 upvotes
Remember America is as diverse as the 300 million people that live there. Don’t give up on them. We can now lead by example and we extend our support to women and men everywhere in the world who are oppressed. I’m tired and hurt too.
And a timely reminder to Australians to never vote religious extremists into our parliament. Even when they think they’re not extreme. A villain never doubts their own agenda.
Resources
Very Peri
News
General
Opinion
True Crime
Politics
Sport
Explainer
Entertainment
Celebrity
Reality TV
Movies
TV
Books
Rogue
Royal
Lifestyle
Beauty
Fashion
Weddings
Home
Wellness
Health
Fitness
Travel
Food
Family
Before The Bump
Pregnancy
Baby
Kids
Teens
School
Parent Opinion
Work & Money
Money
Finance
Career
Lady Startup