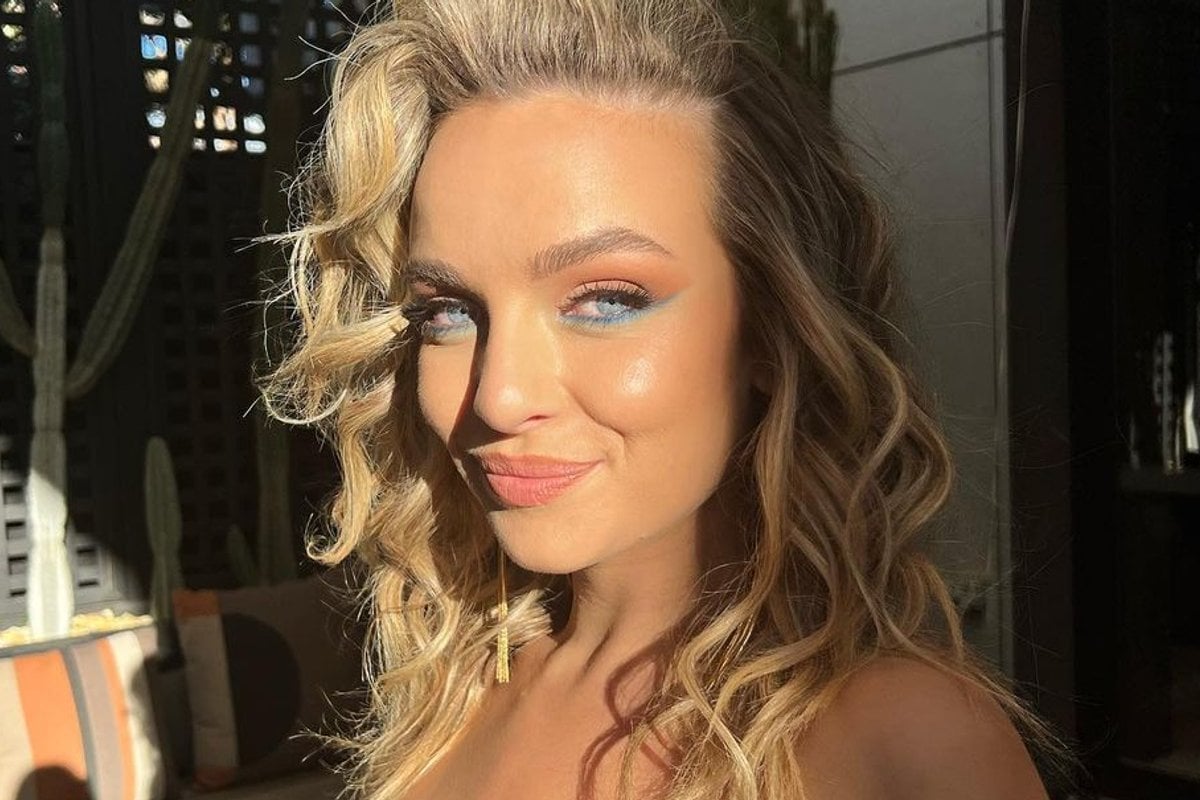 2022 has been Abbie Chatfield's biggest year yet.

In this year alone, the former Bachelor contestant has landed her own weeknight radio show, started a size-inclusive fashion brand, pitched a TV show for Channel 10's pilot week, and will now appear as a judge on The Masked Singer Australia.

Yep, quite a lot of success for someone who was once labelled a reality TV villain.

"It was definitely a shock [to get The Masked Singer gig] but I don't really allow myself to get excited about things until the contract is signed or we're on set," Abbie told Mamamia's daily entertainment podcast, The Spill.

The role, alongside Mel B, Chrissie Swan and Dave Hughes, was only confirmed just before the Logies, making the night - which was also Abbie's first Logies - extra special.

As you'd expect, there's a lot of prep that goes into getting ready for an awards show - there's choosing an outfit, shoes and accessories, followed by hours of hair and makeup.

After the mad rush of getting ready, Abbie realised she had not one decent photo of herself.

"I had a borderline tantrum because I'd spent five hours getting ready and I [didn't] have a photo of myself," she told Laura Brodnik, co-host of The Spill.

"I was so anxious about being at the Logies and what my brain does is focus on one thing," she said, before explaining how that works.

"If you feel anxious, you'll focus on one thing and you'll think 'if just this one thing was right I'll feel better,'" she said. "So I honestly had a little teary in the bathroom."

"Not because of the photo, but [because] I was very anxious," she added.

(Thankfully, Abbie saw our team post a photo of her on the red carpet which she too later uploaded.)

The Logies was a big night for more than one reason - it was the first time Abbie met fellow The Masked Singer panelist, Spice Girl Mel B.

"Just immediately, she's such a lovely, warm, nice person and not intimidating at all," Abbie said of their introduction.

Ever since meeting, the two have gotten along like a house on fire. Abbie puts that down to something they have in common.

"I think because she also has ADHD and has spoken about it, and we spoke about it a lot together, I think we are just quite similar in that way," she said.

Earlier this year, Abbie was diagnosed with ADHD, something she's been openly talking about with her 400,000 Instagram followers.

"I don't think there is any reason for there to be any stigma around mental health or neurodivergencies," she said, before sharing how and when she got diagnosed.

"[During our No Filter interview] she gave me a little fidgety thing and I could speak properly, and I had a clear thought process.

"I was already looking for a diagnosis but she gave me an extra push."

Listen to the full interview with Abbie on The Spill here. Post continues below.

Abbie explained that talking about her diagnosis publicly wasn't scary, but the response to her going on medication has been taken "weirdly".

"Because I'm on dexamphetamine - which people obviously use as a party drug - people are accusing me of glamorising dexies," she said.

The 27-year-old has been told she shouldn't talk about it "because it could trigger someone into addiction."

"That's the weird reaction I'm shocked [about]," she said.

A post shared by IT’S A LOT PODCAST (@itsalotpod)

With all that's going on in her life, Abbie didn't have a day off to start the medication and see how she reacted to it.

So, she took it on set with Mel B beside her.

"I had Mel there to speak to about how I was feeling and Osher [Gunsberg] who is very well-versed is psychiatry and understanding of things like that. I was very lucky to be in an environment like that," she said, before opening up about her friendship with the Spice Girl.

"I honestly at some point forgot she was a Spice Girl," Abbie said while laughing.

"She's just so normal in the most fabulous way. But she's also glamourous and gorgeous in a Spice Girl way," she said.

Abbie also spilled on whether the panelists really don't know which celebrities are under the masks.

"[The Masked Singer] is very intense and everything is very secretive," she confirmed.

"You hear how secretive it is... how it's the best kept secret in Australian media but you don't realise that even behind-the-scenes only some producers know who are the masks.

"Producers who deal with us more often don't even know because they might slip," she added.

"So we truly have no idea who they are."