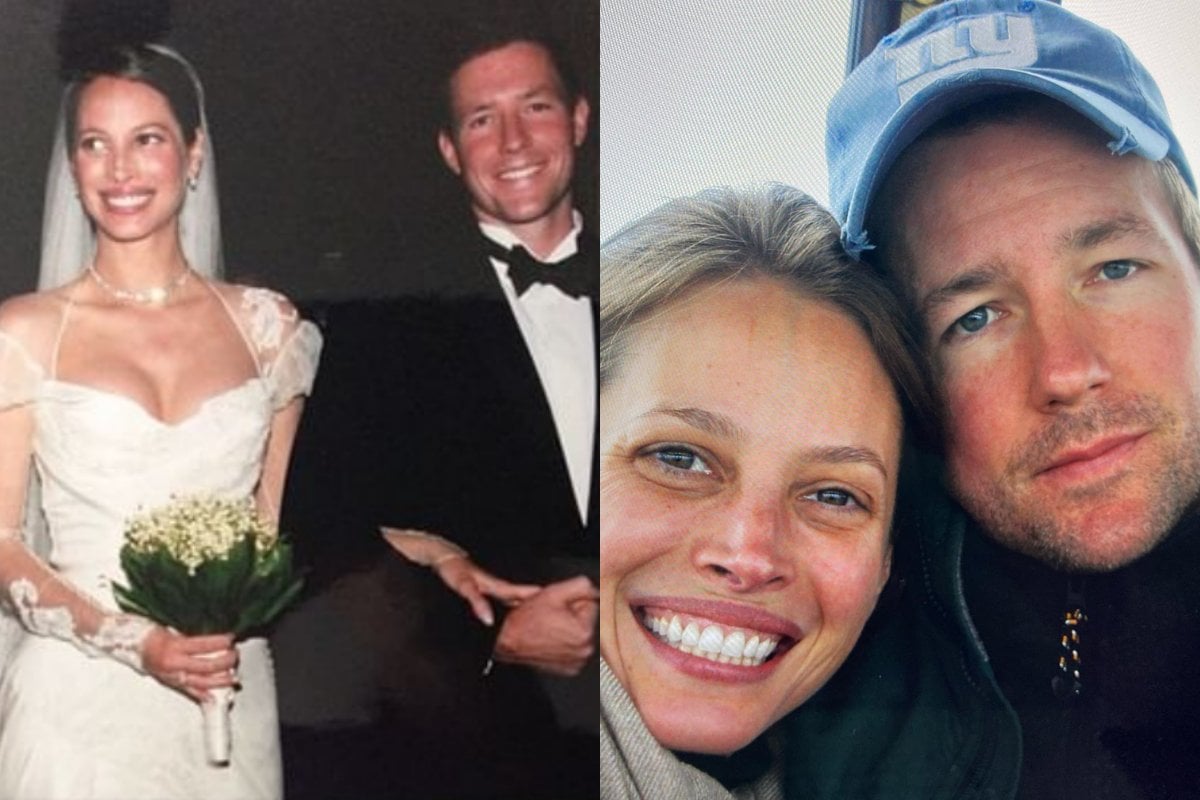 Christy Turlington was one of the original supermodels.

Known as the 'Big Six', Turlington, Linda Evangelista, Claudia Schiffer, Cindy Crawford and Kate Moss graced the cover of almost every high-fashion magazine and walked the top runways in the 90s.

When Turlington first met her now-husband, actor and director Ed Burns, she was world famous. Burns, on the other hand, was a production assistant.

"I was [working] at a television show [Entertainment Tonight], and we interviewed Christy back when I was just a lowly PA," Burns told Huffington Post. "I had to get her a cup of coffee. Fortunately, she was very nice."

"She has no memory of it, but of course, [as] the PA who gets to meet Christy Turlington, I remember it very well."

Turlington and Burns later formally met in 2000 at a charity event.

The couple got engaged six months later, but postponed their wedding, set for October 2001, in the wake of the September 11 attacks.

In fact, the couple postponed their wedding for so long that they broke up, before getting back together a few months later.

Looking back on the breakup, Burns admitted it was "stupid on my part".

"We went our separate ways. I don't really know why," The Holiday actor told Entertainment Tonight, according to Female First.

"We were getting along great, but it was as if that special moment for marriage had just come and gone."

Guests included Sting, Vin Diesel and U2's Bono, who reportedly walked the bride down the aisle, filling in for Turlington's late dad, who passed away from cancer two years prior.

Pregnant with their first child at the time, the model wore an embroidered silk dress with lace by John Galliano.

Turlington recalled Burns becoming a hands-on father from the moment she fell pregnant.

"From the moment I became pregnant, Eddie supported all of my maternal instincts in pursuing our birth options," the model wrote for Today Parents.

"He was as involved as I needed him to be and then when our children were infants, he took on as much of the burden as I was willing to relinquish.

"These were not always harmonious periods of time for us as a couple; let’s face it, as joyous as becoming a parent is, it is challenging for every one of us on some level. But we have come out as great friends and true partners and our kids will hopefully grow up remembering their parents as a team."

Turlington became famous for her 1988 campaign for Calvin Klein's Eternity fragrance, and in 2014, she modelled for it again; this time, alongside her husband.

"The first [time we appeared together for Calvin Klein] was super memorable because we hadn't worked together before," the model told Harper's Bazaar in 2020.

"The second time was in some ways so much easier because we could look at it as a kind of escape from our normal lives.

"It was really nice to go away as a couple and be forced to spend 24/7 together for several days. It's not easy to do these days. Although we were working, it still felt like really good quality time. It was special."

These days, Turlington focuses most of her energy on Every Mother Counts, a non-profit organisation she founded in 2010 that works to make pregnancy and childbirth safer for women worldwide.

"My campaigning for EMC is my main work, and I love it," she told Town and Country in 2016.

Before founding EMC, Turlington began a master's in public health at Columbia University and made a documentary, No Woman, No Cry, to shed light on the issue of maternal mortality.

In the 2010 documentary, Turlington shared footage from her own birth with her first child, where she suffered a near fatal hemorrhage.

Writing for Today Parents, Turlington shared how she and Burns balance parenting as a team.

"The bigger the kids get, the more equal our parenting roles have become, and this is quite an accomplishment," she wrote.

"When I'm on the road, Eddie takes excellent care of them, waking them up, getting them fed and to school (nearly on time) and even managing their extracurricular activities (with a little backup).

"This gives me great peace of mind, because there is nothing to feel bad about when they get their dad to themselves. He has never failed to step up when needed and is happy to fall back when I return to the helm."

The couple's children are now 18 and 16. Their eldest, Grace, has started modelling like her mum.

Speaking to Grazia in 2020, Turlington said how her role as a mum has changed.

"I feel like, yet again, my role as a mum is very different," she told the publication.

"Now my daughter will make me something to eat and bring it to me if she sees that I’m on the phone for too long, you know what I mean? There’s a sort of role reversal."

In June 2021, Turlington and Burns celebrated 18 years of marriage.

"We are older, wiser, softer, stronger, greyer and still, laughing, loving, tolerating, forgiving, championing, and all the other good, hard stuff that makes life worth living together. Thank you for being my partner through it all."

In 2015, Turlington shared the secret to their long-lasting marriage.

"Years ago I put one of my Calvin underwear posters on the back of my husband’s bathroom door," she told Editorialist. "It’s still there and I tease him about it."

When asked to clarify what she meant by his bathroom, she replied: "He has his own bathroom. It’s the key to a successful marriage."