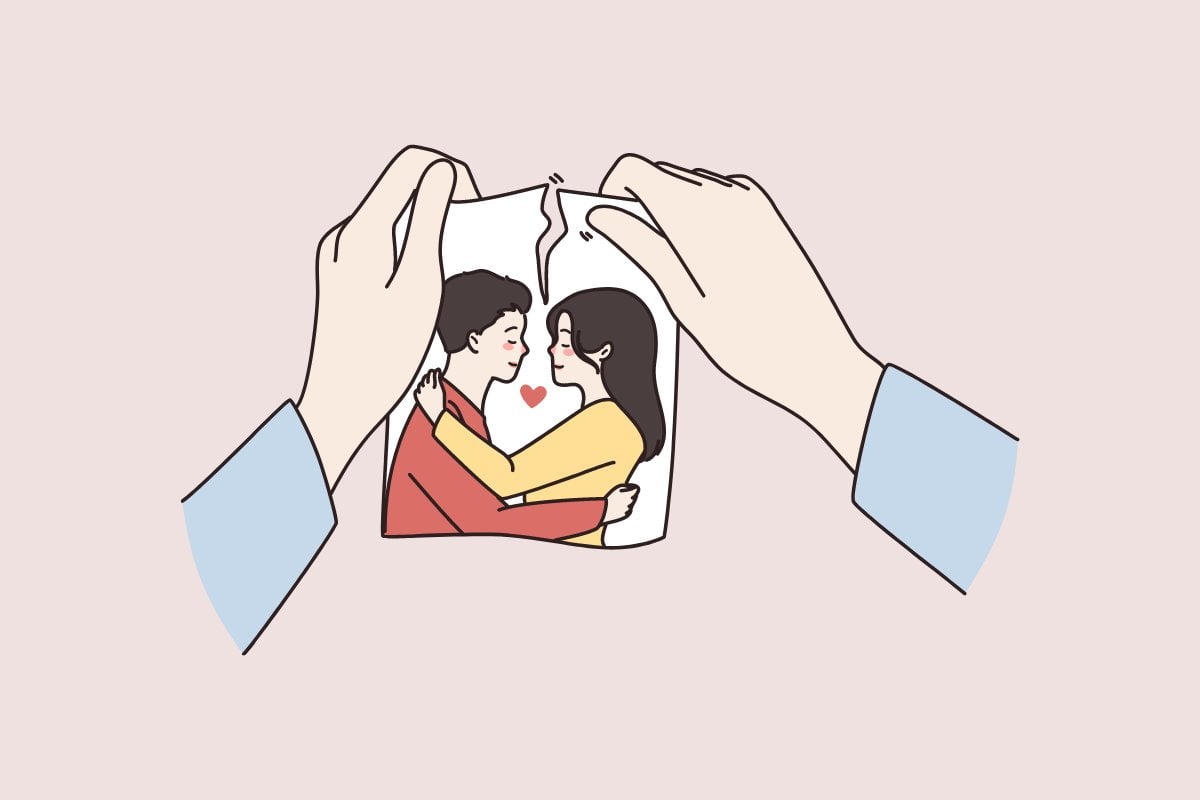 They say the course of true love never runs smooth... but in some cases, it runs downright messy.

That's one of the main takeaways from our new TV obsession, Conversations with Friends – based on the best-selling novel of the same name by Normal People author Sally Rooney.

The series, which is set in Dublin, centres on college students and former girlfriends Frances (Alison Oliver) and Bobbi (Sasha Lane) who are befriended by a successful writer named Melissa (Jemima Kirke) and her moderately successful actor husband Nick (Joe Alwyn).

The romantic lives of these four characters become increasingly complicated and intertwined as Frances begins spending more time with the handsome Nick and Bobbi and Melissa begin to grow closer.

So, in honour of our new Conversations with Friends obsession, we thought we'd take a look at 13 of the messiest, most complicated love stories, and how they ended.

Here's what the Mamamia community had to say.

"I met my last long-term boyfriend at my leaving drinks in London the day before I moved to Sydney.

"He ended up flying 10,000 miles for our first date... which was six weeks long. Then we had a very long-distance relationship for a year before we eventually began living in the same country." - Polly

"Then, in the early days of our relationship he was meeting my grandma for the first time and one of his songs went off as my ringtone. I hastily changed it after that." - Emmeline

"I met my husband when we were dating each other friends."

"I met my husband when we were dating each other friends.He and I got close because our partners were friends, and it was purely platonic. We didn’t realise we had a thing for each other at first.

"Then we both ended up single within the same month and drove past each other randomly. We then wound our windows down and arranged to catch up on Friday. By Sunday we had said 'I love you', we were then engaged three months later and married one year to the day of that catch-up.

"We had our first baby a few months later. Now, it's been ten years and we are still married with four kids." - Sascha

"I matched with his friend on Tinder by mistake."

"I matched with my boyfriend's best friend on Tinder thinking it was him. As soon as I figured out it wasn't, I ignored his friend and added my now-boyfriend on Facebook.

"My now-boyfriend asked me out and his best friend who I matched with on Tinder dropped him at the date. We are still together but sadly those two aren't friends anymore. Nothing to do with me though!" - Charlie

"We had a one-night stand on Christmas Eve, then didn't speak again."

"I first officially met my husband at the local pub on a wild Christmas Eve. That night, we had a one-night stand and didn't really speak to each other again.

"I actually got back with an ex-boyfriend, and it was only years down the track that we met each other again at the same pub.

"He spent the next year trying to convince me to go on a date with him before I gave him a shot.

"We have now been together for 10 years and have 2 kids. He's since told me that he lived three doors up from my best friend during school and he watched me go to her house and manifested that we would get married one day.

"I didn't really notice him, as I was in and out of a high school relationship." - Megan

Watch the trailer for Prime Video's Conversations with Friends. Post continues below.

"I evicted a tenant and moved her into my house that night."

"I was 20-years-old and worked as a real estate agent to pay my way through uni. One day I evicted three tenants.

"One guy followed me around like a little puppy and ask me for my number. Then two days later he was homeless (because of me) and he moved into my house THAT NIGHT!

"We dated and lived together for one and a half years." - Linda

"He interviewed me for a job."

"I was having a job interview at a marketing agency in Sydney's Neutral Bay, and I didn't understand Australian buses yet, so I got the train to North Sydney station and walked all the way there. In a skirt suit and heels, all because I was trying to be #corporate.

"I took the heels off for the last 1.5kms cos my foot was literally bleeding.

"He came down so quickly I had only managed to put one shoe on. Great first impression... I had the interview and got the sense the entire time that he thought I was an idiot (maybe because of the navigational flaws and one-shoe situation), but I got the job!

"We started dating after he left the business a year or two later, and have been together for 7 years." - Katie

"I met my husband while I was having a casual fling with his mate."

"I met my husband while I was having a casual fling with his mate. We started dating, but the casual fling tried to woo me back while he was also seeing another girl.

"We all lived in a small country town so everyone knew each other's business.

"Then I got a job in Melbourne and had only made it official with my now-husband two days before I left.

"We were long distance for about a year and then moved in together in a completely different city on Valentine's Day. We are still really good friends with the casual fling guy and I consider his now-wife one of my best friends.

"My husband and I were even in their bridal party!" - Claire

"I swiped left on my now-husband four or five times."

"I swiped left on my now husband on Tinder four or five times before eventually swiping right... I'm not sure how that's even possible - he says his phone kept forcing him to reinstall tinder.

"I could see he looked like a family-oriented nice guy- but I was in my newly single 'live it up' phase!

"But after a few times of him popping up I distinctly remember thinking 'Fine, universe! For some reason you apparently want me to talk to this guy!'" - Ashleigh

"I fell in love with him and he had a girlfriend."

"My husband and I worked for an international hotel company. He was in Spain and I was in Australia.

"We both got a transfer to the same hotel in Mexico and he walked in with a girlfriend, but I fell in love with him immediately.

"Fast forward a few months to when he was single, and we got together. We've been married now for 17 years and we live in Spain running a hotel." - Debra

"I was in an open marriage when I met my now-husband."

"I was in an open marriage. I left my husband for someone I met on Tinder and now we have a baby together." - Patricia

"A week before I left the country, we hooked up."

"My boyfriend and I had worked together for about three years. We were always great mates, but it was never anything more than that (although I thought he was cute). We both were in long-term relationships which ended around the same time.

"I decided to go travelling overseas to get over the breakup and about a week before I left we hooked up after a (rather drunken) night out with colleagues.

"It started with a kiss on the dance floor and ended with what I thought was a fun one-night fling. Four months later, I got back from my trip and he knocked on my door. We just picked up where we left off.

"Here we are 16 years and two kids later and still madly in love." - Bree

"He was my boss, and I was engaged with a kid."

"The year was 2002. My boss was a pretty awesome guy, we acknowledged that our friendship was developing into something more - but he was married with kids and I was engaged with a kid.

"I told him I refused to start a relationship with a married man. He left his wife that night and I kicked my fiancé out the next day.

"We celebrate 20 years together this month. Our oldest child together is 16 today, and she has two younger sisters.

"We also told our bosses early on, so we were moved into different areas at work. Our jobs often involved working in similar roles, which has been… interesting…

"He is still in a higher position than me at work, but he admits I outrank him at home!" - Kylie

Conversations with Friends is now streaming on Prime Video. You can sign up for a 30-day free trial here.