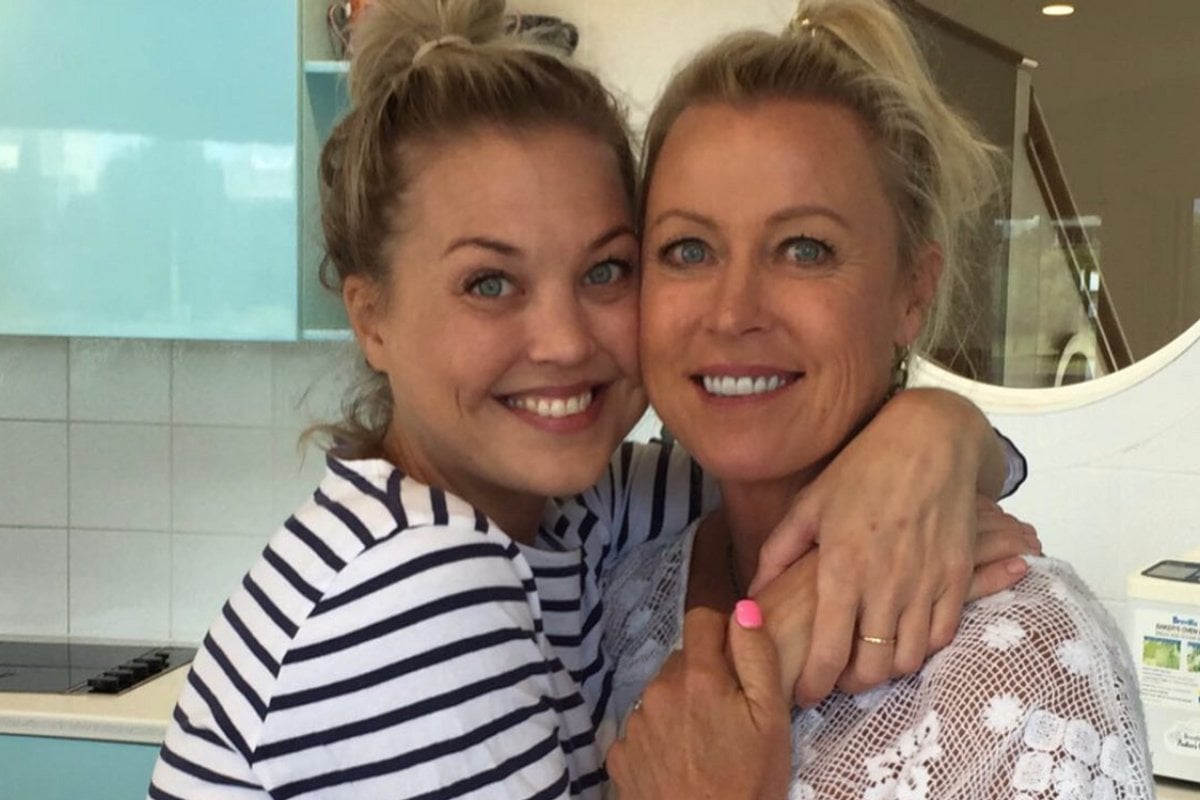 Content warning: this article deals with disordered eating, alcoholism and mental health, and may be triggering for some readers.

Before Lisa Curry's daughter Jaimi died from complications with disordered eating and alcoholism in September 2020, she would ask her mother the same question over and over.

"Jaimi kept saying, 'Mum, I just want to know why I'm like this. What happened to me?' I'd say, 'I don't know. I don't know what happened to you. You were a happy child. I can't think of anything'," Curry tells No Filter podcast host Mia Freedman.

"I mean, there was one incident. I've never said this to anyone but our family. There was one incident when she was four - one of our neighbours down the road had to look after her for one hour because Grant [Kenny] and I were away. [Grant's dad] had to pick her up. When he picked her up, she was crying.

"And she said she had been locked in the cupboard. Now, that's when she was four. We didn't know if it was true. We didn't say anything. We didn’t want to upset anyone else. Nowadays if Flynn [her grandson] said to me, 'Someone locked me in the cupboard', I'd be straight down there banging on their door."

Listen to Mia Freedman's full interview with Lisa Curry on the No Filter podcast below. Post continues after audio.

More than most, Curry understands just how insidious addictions can be.

"I know this sounds awful, but [people with addictions] are quite manipulative. They will find a way. There's a lot of deceit in there. Addiction is so powerful," she says.

"My good friend Mark Forbes [the founder of EndED and father of two daughters with eating disorders] was talking about addictions. And it was really interesting hearing it from someone else because he said addictions are like a beast that's inside of you.

"This toxic beast. And you hear that and you think that's an awful way of saying it but it's true. It's so true. I've seen it. I've seen it in Jamie. And he's seen it in his kids.

"It's really hard to explain unless you've seen it yourself... You see this other person that's not your child. And it comes out in their personality, their mannerisms, their speech, their aggression, their attitude.

"This thing, it's not them. It's the addiction. It's the beast. It's the toxic beast that's taking over their body. And it's horrible. It's horrible to see and to feel."

Even though talking about Jaimi's addiction and death is painful for Curry, she knows it is important.

"Many years ago, I said to myself, in my gut, in my brain, my sleep at nighttime, 'I know I can make it to the Olympics again. I know I can.' There's that thing inside of me now that says, 'You know what, I'm gonna fix this. I can find a way, someone has to, someone will, why shouldn't it be me?'

"But I have to get through that point where I can talk about it openly without being a bawling mess. But maybe one day in the next five or 10 years, something will click and we will say, 'Now we know what's going on. This is where it starts. These are the red flags. This is what you can do. These are the people that you can see, let's knock it on the head before it gets too bad.'"

Many people might not know that disordered eating or alcoholism can actually be fatal.

"I think people can talk themselves into or out of anything. What they don't understand is it's damaging your organs, slowly. If you decide to take an overdose of pills and you die, you're gone straightaway. But you might take three quarters of those pills, and it won't kill you now, it’ll kill you over time, slowly. Same with eating disorders. Same with alcohol," Curry says.

"We know that at some point, people have a chance to turn things around. And people have... But once your organs are going into failure, slowly breaking down, your liver’s not working. Therefore, everything stops working, because everything affects everything else. It affects your heart, brain, kidneys, digestive system, everything starts to spiral down."

When Jaimi was 28, the doctor gave her an analogy about her disease. He told her she was on an escalator and when she got to the top of it, there was no coming back. But he couldn't say how far up the escalator she already was.

"He said that he would be surprised if she’d make her 30th birthday," Curry says.

"But see, this is the thing about your organs. Your organs are always trying to keep you alive. They will do everything they can to keep the body going. But as time goes on, they just can't keep up with it.

"And so for people who drink a lot, or are abusing their system by not eating or being bulimic, it starts to affect organs over time. But people don't understand that."

Despite her illness, Jaimi would always maintain an upbeat attitude.

"She would be sitting up in hospital, as sick as she was, laughing with the nurses, thumbs up, taking photos of all sorts of things. She sent me every photo every time she was in hospital. It was like she had 1000 lives. And she always came home," Curry says.

"Part of her wanted to [stay alive] but part of her couldn't. She said, 'Mum, if I could kill myself I would'. But she said, 'I can't do it'. And I would say to her, 'But you're doing it every single day'. So we never knew where she was on that escalator.

"People listening to this [podcast] who have addictions, if you don't seek help, you are getting to the top of the escalator and you don't know when your last day will be."

After going through such heartbreak, Curry wants people suffering from addiction to know that they are loved and that their life matters.

"Be careful who you follow on Instagram. Be careful who you aspire to be. Because not everything is as it seems on social media. The world at the moment is a funny place. Humans are ruining humankind. We need to be kind to people, we need to know that every second person is struggling in some way. I know that from the amount of people that have reached out to me...

Curry, who has recently lost her mother, knows that this Mother's Day will be hard.

"I did an interview yesterday and they are running it on Mother's Day and they said, 'Oh, what are you doing for Mother's Day?' And I went 'Well, last Mother's Day was shit because I'd lost my daughter and this Mother's Day, I don't have a mum," Curry says, crying.

"It feels different because you expect to lose your parents... there is an acceptance that at one point, as hard as it is, you will lose your parents. Mum was 86. And of course it was hard. But you should never have to bury your kid."

So how does Curry find the strength to carry on?

"That's a hard question. Because I don't feel like I can," she breaks down into tears.

"I struggle every day. And I know that I have a wonderful husband. He's always with me. But Grant doesn't have anyone with him. That saddens me. So that's why [daughter] Morgan, [son] Jett and I are looking after him...

"You change as a person. I was an athlete, now I've done nothing for a couple of years. I've cried and ate. And I just feel shit. I feel horrible in myself but I can't even take myself to the gym, which is something I loved. I'm navigating the next 30 years of my life.

"I turn 60 on May 15. I've got to keep reminding myself that Jaimi would want me to stay happy... She's everywhere around me.

Lisa by Lisa Curry is published by Harper Collins and is available now.

Listen to the bonus episode of No Filter where Mia Freedman and Lisa Curry talk about why Lisa decided to share her story. Exclusive to Mamamia subscribers, listen here.

For help and support for eating disorders, contact the Butterfly Foundation‘s National Support line and online service on 1800 ED HOPE (1800 33 4673) or email [email protected] You can also visit their website, here.

Reply
Upvote
Such a beautiful and incredibly painful interview. Thank you so much for sharing this with us all, your strength and honesty has floored me and also inspired me to face the hard stuff life throws at us. I just hope I do it with as much honesty and grace as you have xx
M
mamamia-user-876714449 11 days ago

Reply
Upvote
Beautiful Lisa. I have admired you since your swimming days and I was once lucky enough to see you speak at Fernwood. I am so sad to see you go through this pain. Thankyou for sharing it with us, you show us the messy pit of grief and also the hope. Much love and strength to you 💔❤️‍🩹
News
General
Opinion
True Crime
Politics
Sport
Explainer
Entertainment
Celebrity
Reality TV
Movies
TV
Books
Rogue
Royal
Lifestyle
Beauty
Fashion
Weddings
Home
Wellness
Health
Fitness
Travel
Food
Parents
Before The Bump
Pregnancy
Baby
Kids
Teens
School
Parent Opinion
Work & Money
Money
Finance
Career
Lady Startup
Relationships
Sex
Dating
Separation
Friendship
Family
Real Life
Couples