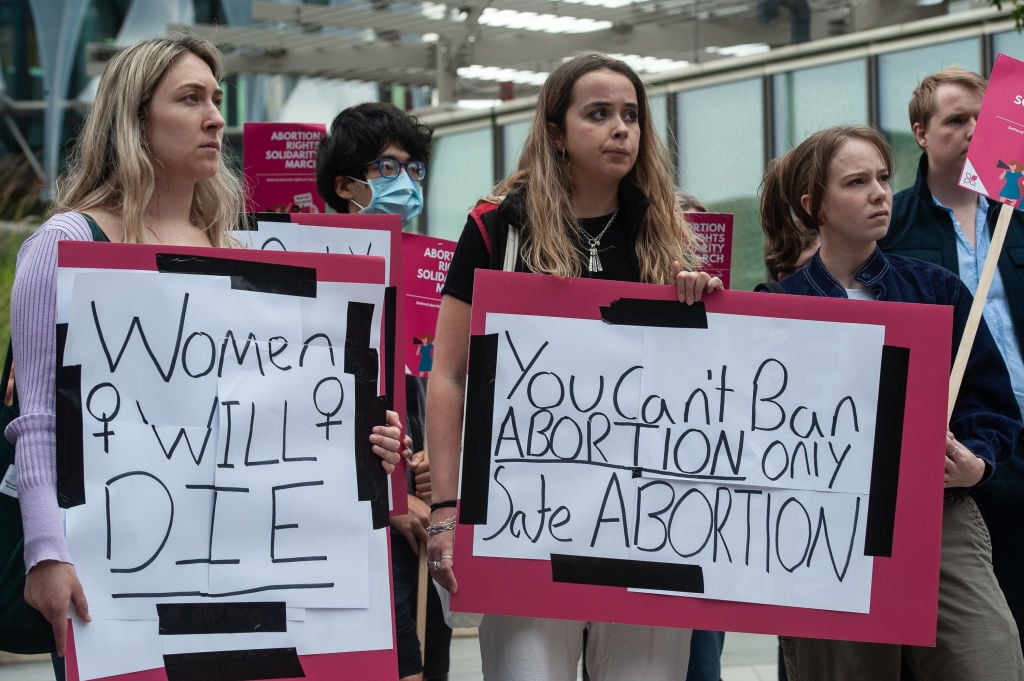 This morning, Australians woke to the news that overnight the US Supreme Court had overturned the Roe v. Wade ruling; the 1973 law that recognised a woman's constitutional right to abortion.

And just like that, the abortion rights of US women have been set back by 50 years.

So, how did this all begin?

In May, a draft ruling indicating the US Supreme Court might overturn their famous Roe V Wade decision, which saw abortion legalised in the country, was leaked by news site Politico.

The news ignited widespread outrage across America, with hundreds taking to the streets outside the Supreme Court calling for the protection of women's abortion rights.

Watch: Is Abortion illegal in Australia? Post continues after video.

However, voices on the other side of the debate were just as loud, with anti-abortion activists calling for further restrictions around the medical procedure.

Here's everything you need to know about the Roe V Wade decision.

What is Roe v. Wade?

Roe v. Wade is a landmark decision made by the Supreme Court in 1973 that legalised abortion in the US.

At the time, the judges ruled by seven to two majority, finding that a women's right to an abortion falls within the right to privacy protected under America's Fourteenth Amendment.

However, there was a catch.

While the Roe decision legalised abortion during the first trimester of pregnancy, it stipulated that different states could decide whether abortions were allowed during the second and third trimesters.

Fast forward nearly 50 years and abortion has remained one of the most divisive issues in US politics. Democrats tend to support abortion rights while Republicans tend to oppose them.

According to Gallup Polls, more than 80 per cent of Americans support abortion rights.

So wait, who exactly are Roe and Wade?

Wade refers to the defendant, Henry Wade, who was the district attorney at the time.

Roe, however, was the pseudonym that pregnant Texan mother Norma McCorvey used when she filed the case challenging criminal abortion laws in 1970.

Three years later, the court handed down its decision in 1973, legalising abortion in the US.

But by that time, Norma had already given birth to her baby and given her up for adoption.

Interestingly, years later in 1994, Norma changed her tune and announced she had become an advocate for an anti-abortion campaign, calling for the medical procedure illegal once again.

Throughout the rest of her life, she attempted to overturn Roe v Wade but was unsuccessful.

However, when Norma knew she was dying, she revealed in the documentary AKA Jane Roe that she only joined the anti-abortion side because she’d been paid to do it, saying she was “a good actress”.

With the decision overturned, abortion rights are no longer be under federal protection, meaning it is up to states to ban or allow the procedure.

Already, eight states have legislated to ban abortion in all circumstances, including rape and incest. An additional 13 states are likely to adopt the ban, while a further nine states are uncertain.

Reply
Upvote
1 upvotes
You can buy a gun and shoot someone in America with little chance of being prosecuted, but can't control your own medical care. Welcome to Gilead.
B
bowerbird 3 months ago

Reply
Upvote
3 upvotes
This is so worrying, for so many reasons. To regress 50 years at the behest of fundamentalists is terrifying. I’ll never take my freedoms for granted again.
Ps: make sure you check which camp your local candidates are in before voting this election. US might feel far away, but their ideologies are not!

Reply
Upvote
1 upvotes
@bowerbird I think the scariest part for me that something like 70% of Americans are actually pro-choice. To have so many people's rights taken by a powerful minority is worrying.
S
snorks 3 months ago