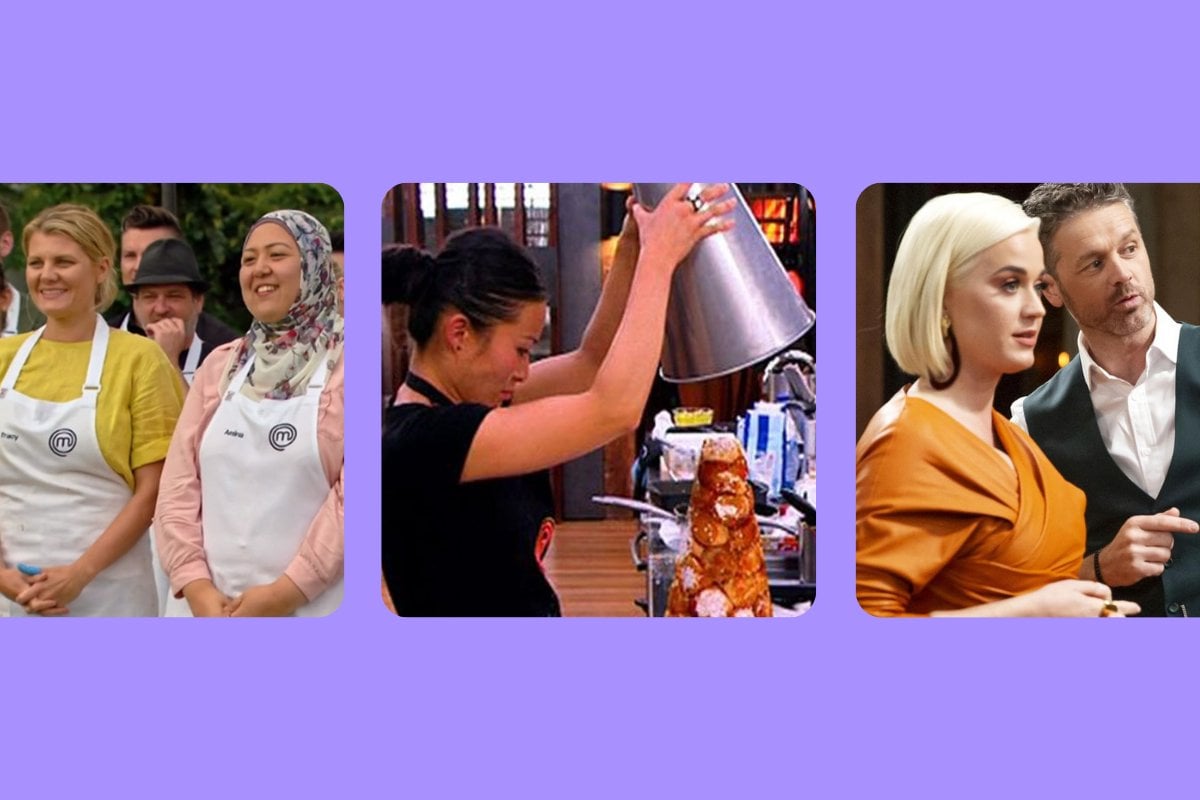 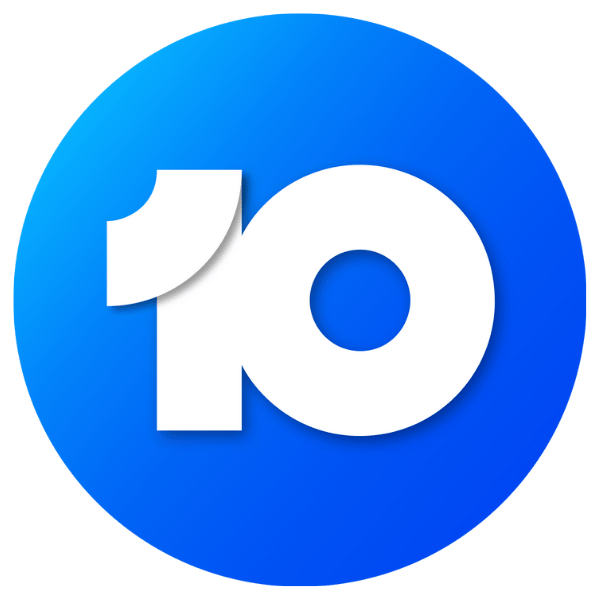 Thanks to our brand partner, Network 10

You never ever fail to reel me in, and tug on those heart strings. You’d think after 13 seasons, one would have cooking fatigue, but HECK NO with this series.

The delicious food, recipe inspiration, engaging judges, and honestly such inspiring contestants that share so much heart with us viewers, keeps me coming back for more season after season.

With the new fourteenth season having kicked off for 2022, MasterChef Australia: Fans & Favourites, I’m absolutely here for the much-needed hit of nostalgia, fun, and heartwarming telly.

I’m admittedly a I-can’t-make-that-because-MasterChef-is-on kind of fan. Plans Sunday to Thursday? Sorry, we’ll have to shift those. MasterChef is on! I’ve also gotten my kids hooked too.

Some of my all-time fave MasterChef contestants are returning (Julie, Sashi and Tommy, woot!), and the gorgeous judges, who really, really have the best chemistry of any hosting trio on our screens!

From all the excitement of this new season, it got me thinking about which MasterChef moments from all 13 seasons (since 2009! A different world!) have been the most memorable and wholesome IMO.

I tell you, it’s hard to choose just 10, but I took on the challenge. Here’s my definitive list.

1. Callum and Adam’s final battle in season 2 to create the Snow Egg.

This was just a ripper moment. IYKYK.

Both these men were such kind, hardworking, talented individuals that I would have been happy for either to win, and they really took TV in 2010 to new limits when creating this incredible dessert before our eyes.

It was wonderful watching them support and encourage each other as they worked (a value that’s baked into the MasterChef franchise), and they both reached a wonderful ending – Adam was the winner, but (at the time) 20-year-old Callum was essentially awarded his debut into an incredible career of food: the best! 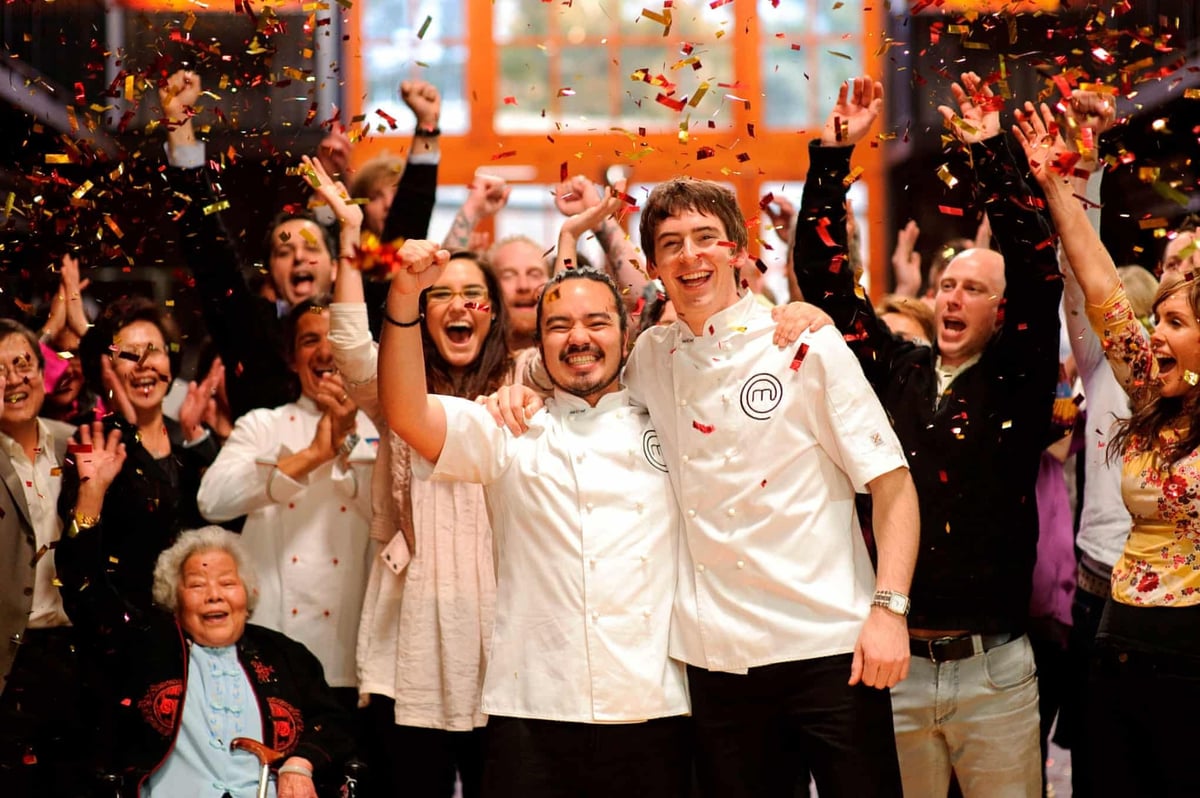 Look, we will always appreciate the original MasterChef Australia judges. Matt’s cravats were a trademark we came to expect gracing our screens.

But the arrival of the new judging trio in season 12 – Melissa Leong, Andy Allen and Jock Zonfrillo – were also an iconic marker of a new era for the show. It was also such a win to welcome the first female onto the judging panel, Singaporean-Australian Melissa (a freelance travel writer, host and cookbook author). 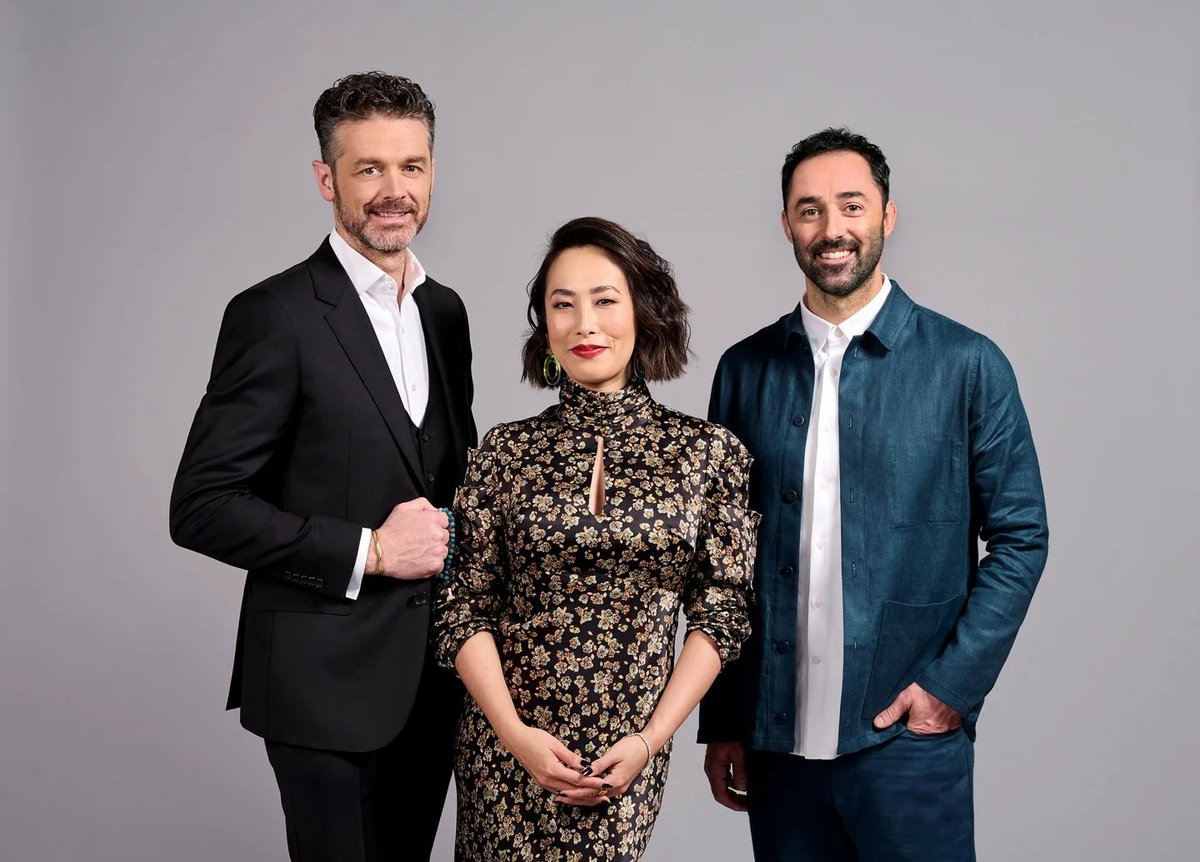 Melissa, Andy and Jock complement each other so perfectly, and are so encouraging and supportive of all contestants; each bringing their own nuanced perspectives, lived experiences and philosophies of food to every tasting.

Extra bonus for me (read: everyone) is Melissa’s amazing style – every outfit inspires admiration and awe from me! No wonder her clothes have their own Instagram.

Sashi from season 10 (returning to Fans & Favourites! Rejoice!) is one of my fave contestants ever.

When the infamous Sherried Marron dish (with 50 ingredients and 90 steps) was the set challenge, he did have a teeny bit of a freak out… made worse when he accidentally burnt the recipe by putting it too close to the stove! Sure, it was stressful for Sashi but THE REST OF US. A real nail-biter.

One of the reasons I will forever love MasterChef is the kindness contestants shower each other in. In Sashi’s difficult moment, the kind Jess Liemantara loaned him the recipe so he could survive the challenge (and go on to win the season!).

About +100 wholesome points there if we’re keeping score.

4. Poh vs the croquembouche.

One of the biggest, most wholesome feats I can remember on Aussie television.

This was way back in the day, in season 1 (2009!), and when we as the audience knew little about cooking (not like the armchair experts we are now after 13 years of this gold!). 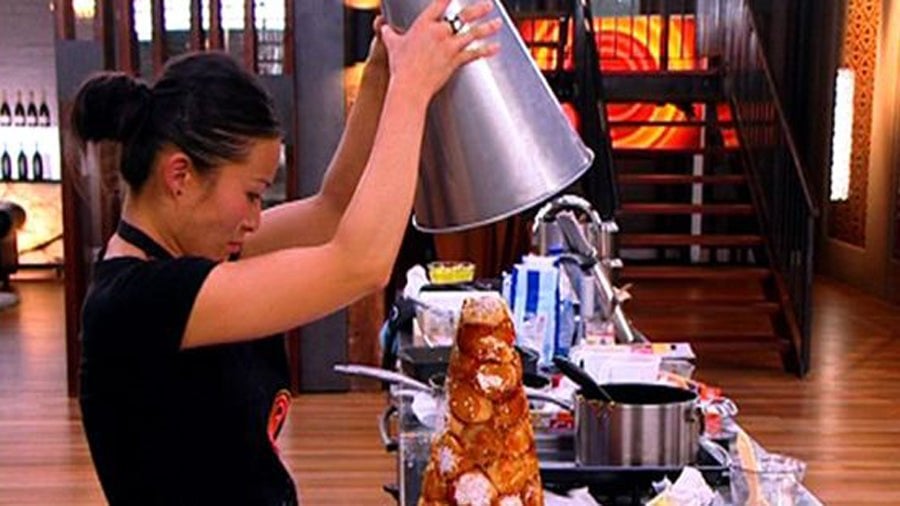 Everything the contestants did was impressive, but this was SO incredibly impressive: Poh tamed the croquembouche of all croquembouches. It was ALL of the steps and many things went wrong (of course, in Poh’s fast and loose cooking style), but she kept her signature smile and triumphed.

Go Poh! Why do I think about this wholesome moment so often?

Billie McKay from season 7 was so relatable and lovely for us viewers to watch, except for her love of all that molecular gastronomy stuff – sure, it’s impressive, but just… how? Us everyday cooks don’t quite… get it. We’re in awe, but heck, we’re confused.

But Billie loved it, and it was such a special moment when she won season 7 and Heston Blumenthal offered her a dream job at The Fat Duck in London: which she took (!!!).

Oh the joy, oh the tears! 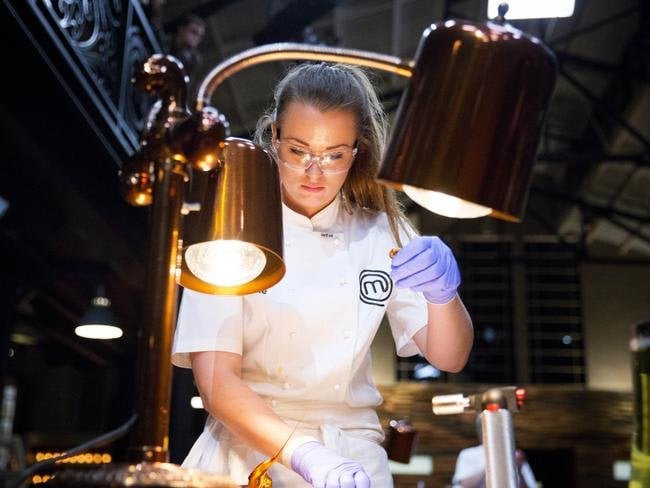 Oh my goodness, I love Reece always, and his reactions were everybody’s reactions. But truly in this moment, he was ME. 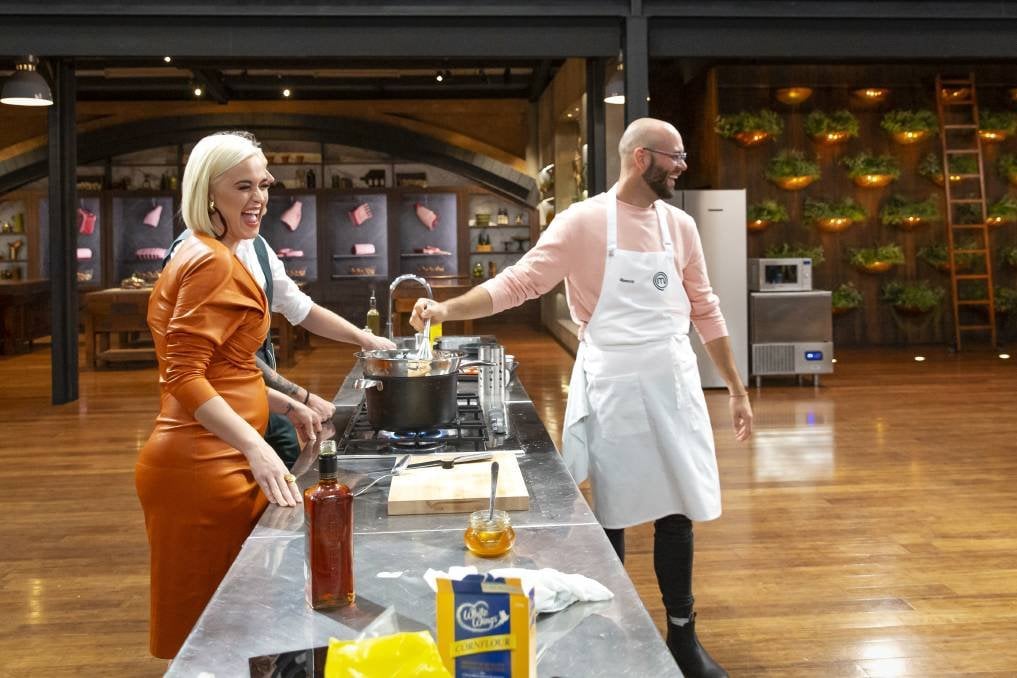 I could not have been cool, calm and collected in the face of THE Katy Perry coming into the kitchen to watch me cook and taste my food, and Reece certainly wasn’t. He giggled and cried and felt all of the things. Tingles. I see you Reece, I feel you.

7. Julie winning it for all mums, everywhere.

I didn’t understand at the time (pre-children), but leaving your kids to go on a reality TV show and really pursue your dreams is kind of a ~massive deal~. Julie Goodwin was the trailblazer with this, season 1 of MasterChef; this warm, loving, humble home cook left her family to pursue her dreams.

AND SHE WON. Even at the time I thought she was super great, but now, two kids under my belt, I think she’s bloody incredible. Cheering she’s back on our screens again for Fans & Favourites.

Like most of Australia I fell in love with Minoli last year on season 13. 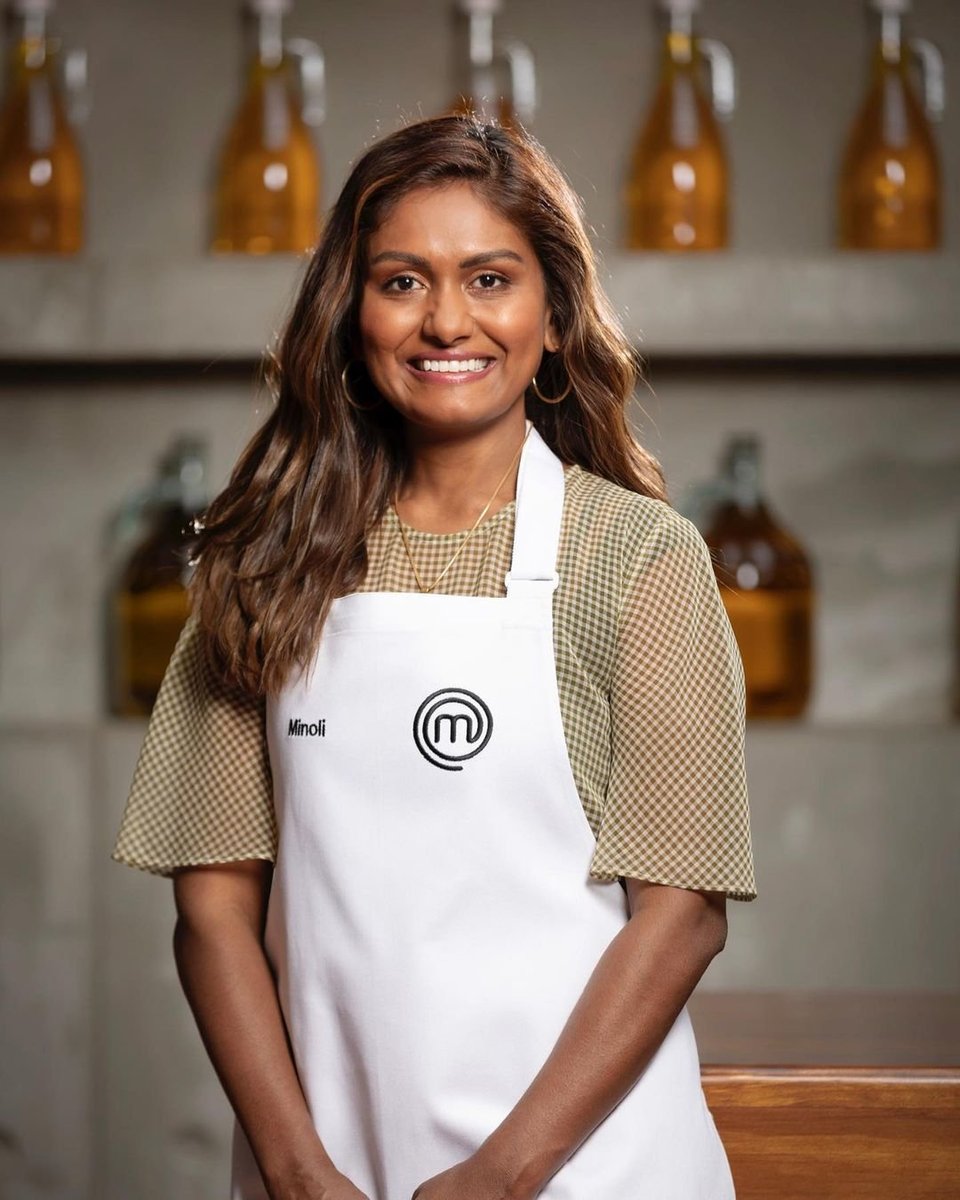 What an inspiring person: she lost her tastebuds due to a battle with breast cancer and still pursued her cooking dreams. I was totally gutted when she had a dish fail and was eliminated quite early in the season.

But you can’t keep a good woman down, and this resilient gal returned for Second Chance Week and created a Chocolate Oasis that brought her back into the competition where she belonged! She came 10th in her season, and I’m over the moon to see how far she goes in Fans & Favourites.

It wasn’t really a moment as such, but my gosh, watching two men fall in platonic love with each other on national television is a joy!

This happened with Ben Milbourne and (now judge) Andy Allen all the way back in season 4. It was so beautiful and wholesome to watch these two young blokes develop a friendship and champion each other throughout the season. After Andy won season 4 the two continued to work together on other food projects and shows, and still talk about each other fondly in interviews almost 10 years after meeting. 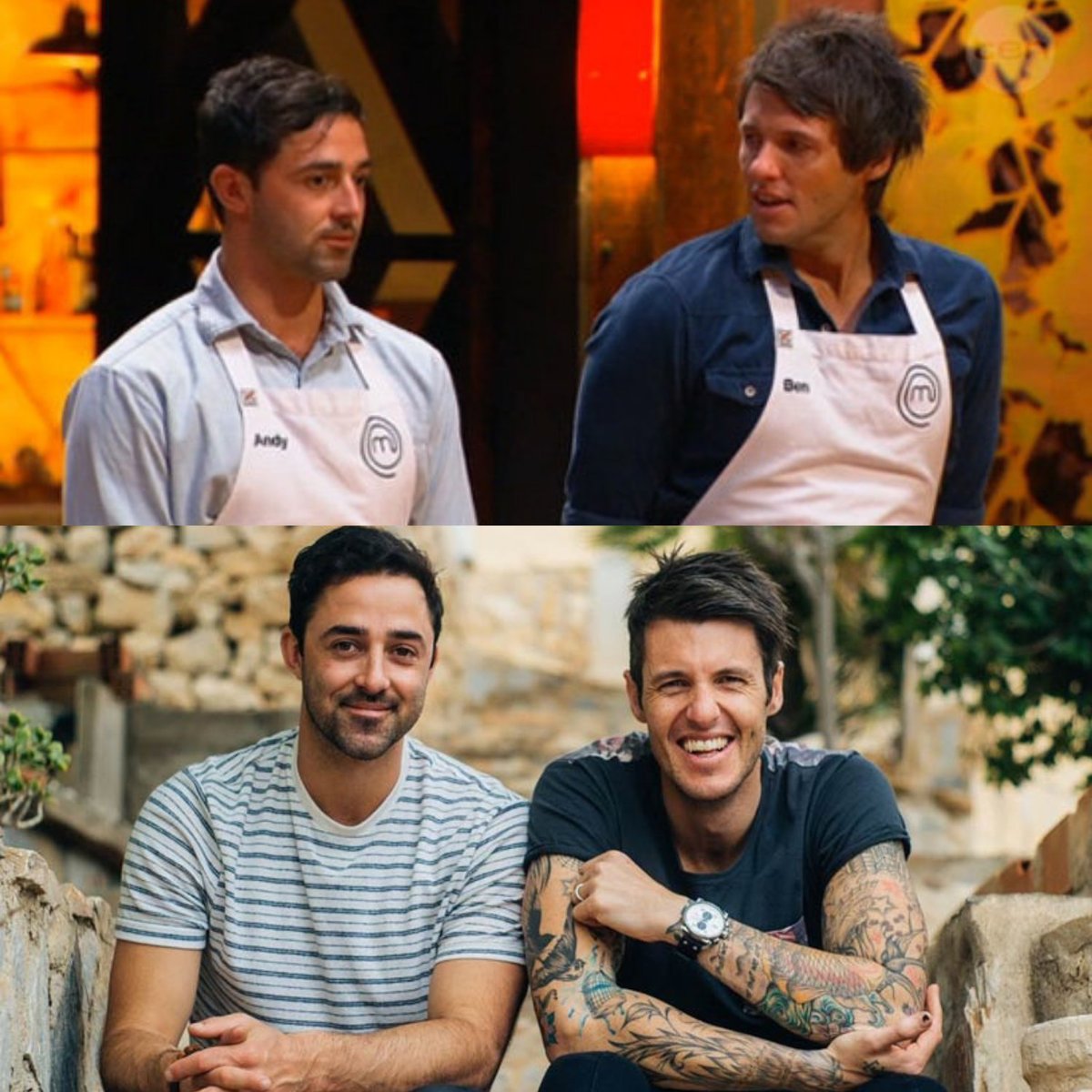 I can’t mention the bromance without mentioning the sisterhood. This has to be my absolute top, fave MasterChef moment surely – Amina, Tracy and Emelia helping each other to ace the all-women immunity challenge. Emelia tasting Amina’s beef for her as it wasn’t halal, Amina singing to keep them motivated, Emelia wiping Tracy’s plates because she’d finished her own. This is reality TV at its absolute finest and makes me tear up. 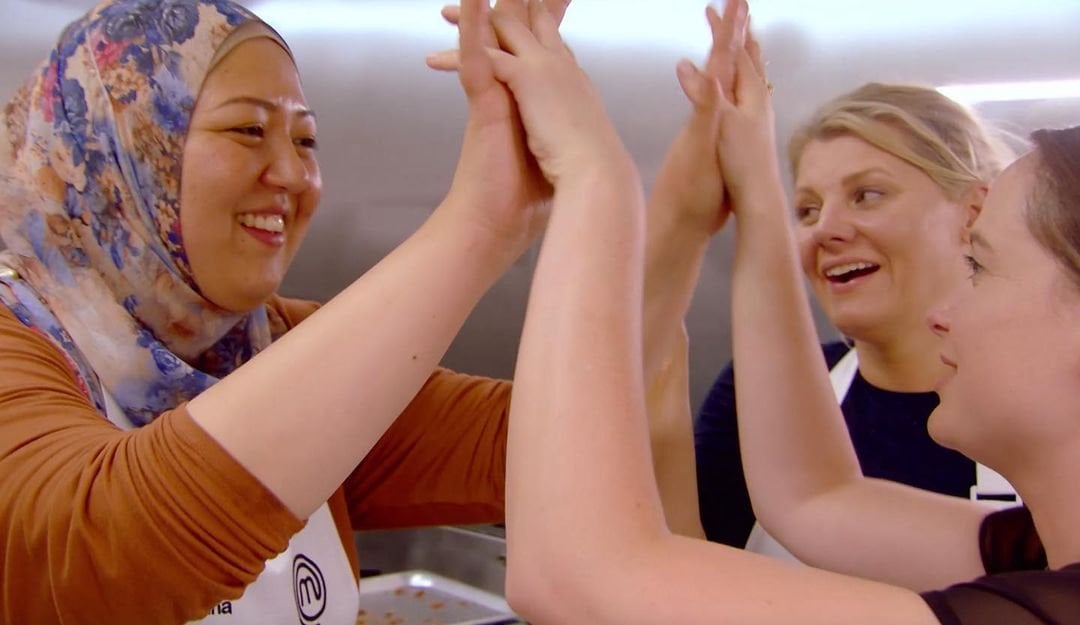 So that’s it! My ultimate top 10 wholesome moments we’ve ever seen on MasterChef, the crème de la crème of reality TV.

Do you remember some of those winning moments? I clearly do, and I am so excited to enjoy more MasterChef gold as MasterChef: Fans & Favourites unfolds. Please never end!

There are some amazing new faces joining the lineup, plus fan faves like Sashi Cheliah, Mindy Woods and Michael Wheldon. Plus I’m totally pumped to see Melissa’s outfits for another season.

MasterChef Australia: Fans & Favourites airs Sunday to Thursday at 7.30pm on 10 and 10 Play on demand.

Catch MasterChef Australia: Fans & Favourites Sunday to Thursday at 7.30pm on 10 and 10 Play on demand.