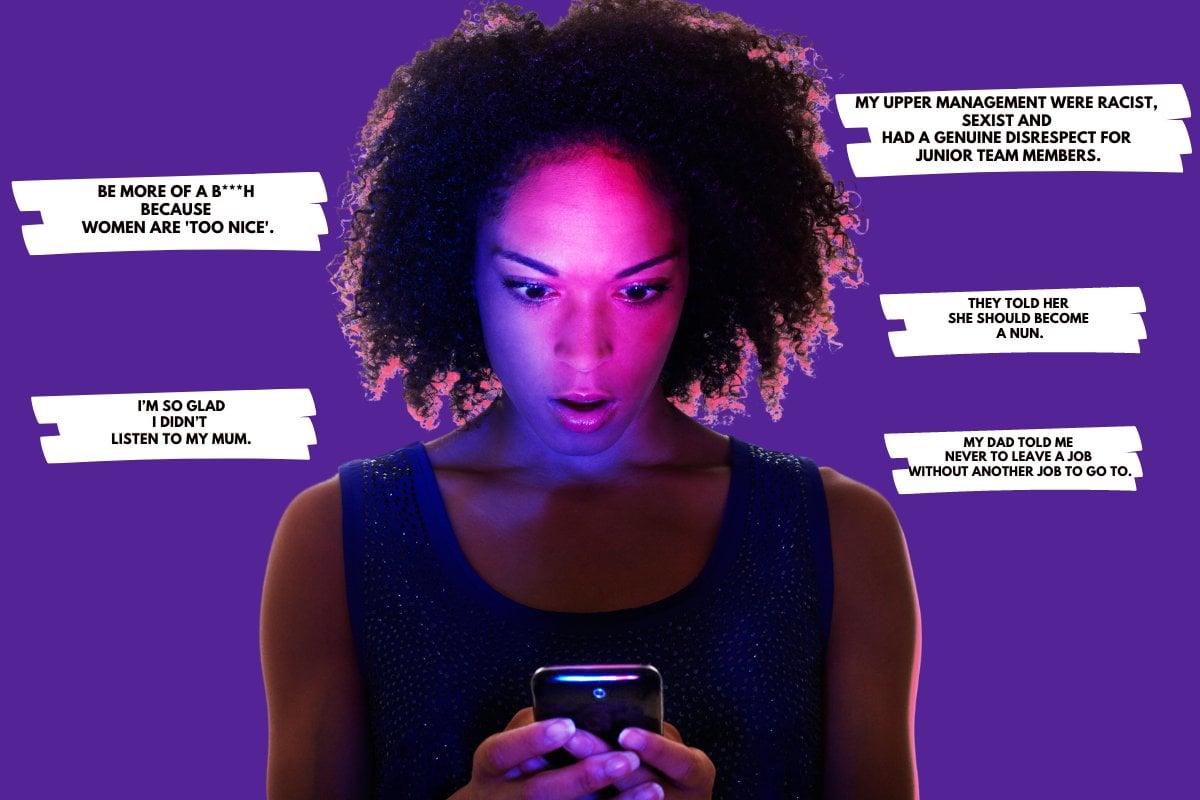 Every time I told anyone about my career aspirations as a teenager, I was met with handfuls of "work wisdom" and "helpful anecdotes".

Some of it was indeed helpful career advice, while others.. not so much.

While we value the nuggets of wisdom from those who may or may have not gone through the same career journey as us, there are some pieces of advice that we definitely should not be implementing into our own lives.

Watch When I grow up I want to be... Post continues after video.

So, we asked 13 women on the worst career advice they've ever received. Here is what they had to say.

"I thought that because pretty much everyone in my family was in the army, that I had to join the army too. It wasn't until I was like 14 or 15 years old when I was talking to my dad about my mate's career plans and I said, 'It's pretty cool that they get to choose different jobs, but all of us have to just do the army' and he was like, 'what?' ... 'please don't join the army chuck, you would be really, really bad at it'."

"My dad told me never to leave a job without another job to go to. Although I greatly respect his advice and understand his position on that, he's a product of his generation and their work culture, and I think its outdated advice. The best thing I ever did for my career was to quit a job I hated, take some time to sit back and reassess my goals, as well as a much needed break in general. When I was ready, I was able to really lean back in to job searching and put myself out there."

"We had a career advisor at high school and in year 10 she would give fortnightly talks. In the first week she said to us 'I personally think that every person in this room and at this school should go to university, everyone should go to university'. At the time I remember being really put off by it and in hindsight, I completely disagree. I loved uni, it was great for me. But I had so many friends start, change or drop out of uni because they felt they had to go. Uni isn't right for everyone, not every job needs a degree. And after working at a uni for over three years I saw so many people stay in courses, failing units, going into lots of debt just because they were told to go to uni - not because they wanted to be there. There should be more value placed on finding what you love to do and not on getting a degree."

Psst! Want some good work advice for a change? Listen to this episode of 8 Minutes To Change Your Work Life. Post continues after podcast.

"A friend I went to catholic high school with was told during their year 10 career aptitude tests that she should become a nun."

"A man told me to get a teaching degree, because he was assuming that a woman of my age (I.e. late 20s and recently married) would benefit from the hours that teaching would give me with a young family. This was after telling me that I had missed out on a job promotion leading a team. Guess I know why I missed out..."

"I was told to become a manager in fast food as it would look good on my resume. I understand how great it would have been in some ways, but thank god I didn’t listen or else I wouldn’t have had the determination to finish university as strong as I did."

"My father may have instilled a very strong work ethic in me, but he didn’t believe in treating women with respect and that’s how he got fired from his last job. He genuinely told me I should be as hard and tough as he is in order to get far. Thank God I didn’t listen, because I’m yet to be fired for sexism in the workplace!!!"

"My mum moved overseas whilst I was in university. It was hard, and I struggled without having her near me. She told me to move overseas with her, and continue on my studying and career there. I’m so glad I didn’t listen to my mum, because if I did, I would not be as happy or as independent as I am today."

"To get a degree in order to compete against others. Waste of time and money for me."

"Mum told me to be pushy, even a b***h, to get what I want out of my career. It’s not in my nature, and I think that advice was a result of having to fight ten times harder than men during her time in the workforce to get even an ounce of respect or career progression."

Listen to The Quicky, Mamamia's daily podcast that gets you up to speed on the top stories, then deep dives on one topic you want to know more about. Post continues after audio.

"My boss told me to basically worship my upper management, as they were the people who would going to push me further into my career. I regret listening to that, because my upper management were racist, sexist and had a genuine disrespect for junior team members. They didn’t help me in the slightest. It was terrible career advice and now I follow the rule that people get my respect when they show respect."

"I was told not to take a gap year to travel, work or save money, and instead go straight into University. Listening to them was my biggest regret."

What is the worst career advice you've ever received? Let us know in the comments below.

Like a $50 gift voucher for your thoughts? For your chance, take our survey!