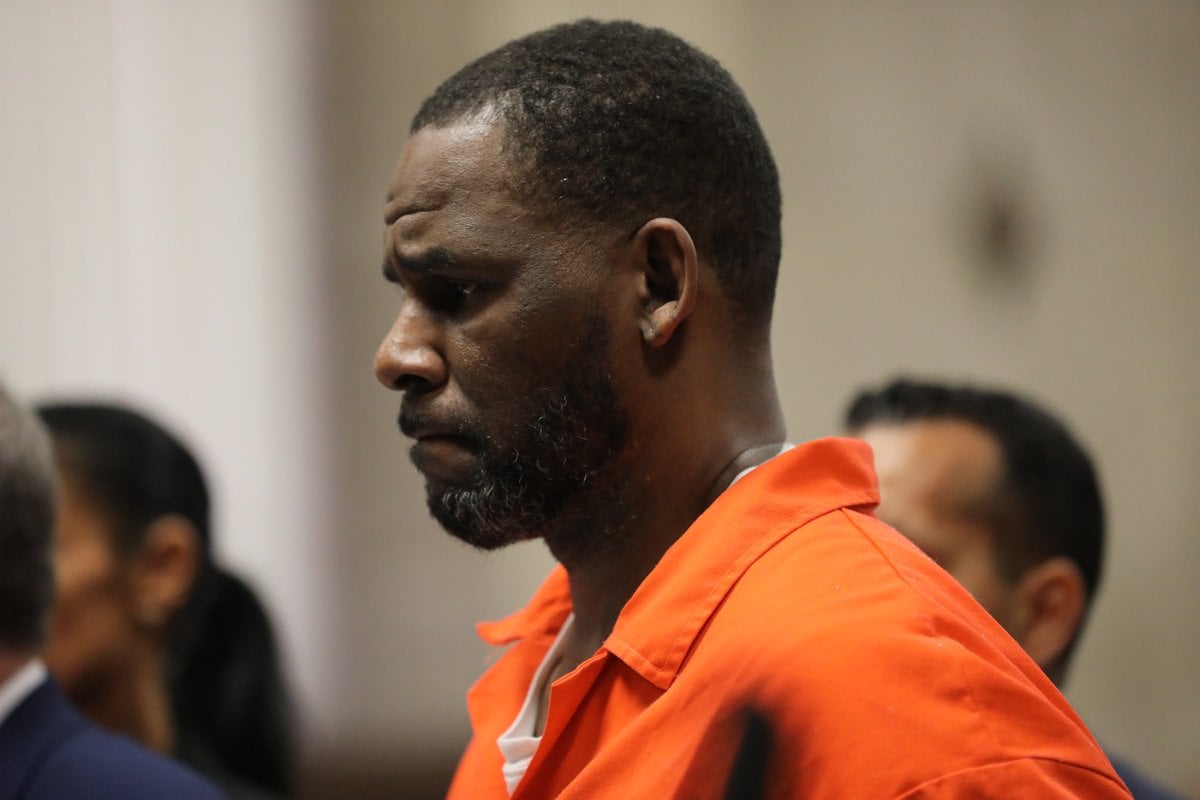 This post contains mentions of sexual assault and child sexual abuse and may be triggering for some readers.

R. Kelly has been sentenced to 30 years in prison for using his R&B fame to subject young fans to systematic sexual abuse.

The 55-year-old Grammy-winning singer-songwriter, whose full name is Robert Sylvester Kelly, was convicted nine months ago on one count of racketeering and eight counts of violating the Mann Act, which bars transporting people across state lines for prostitution.

"This case is not about sex. It's about violence and cruelty and control," Donnelly told Kelly.

"You left in your wake a trail of broken lives."

Kelly did not speak during Wednesday's hearing but has repeatedly denied sexual abuse accusations.

Watch a clip from documentary Surviving R. Kelly below. Post continues after video.

The singer is one of the most prominent people tried on sex charges during the #MeToo movement, which amplified accusations that had dogged him since the early 2000s.

The sentencing came after several accusers, some of whom were tearful, told the judge about how Kelly promised to mentor them and help them attain stardom, only to subject them to degrading sexual treatment and physical harm.

"As a teenager, I didn't know how to say no to R. Kelly when he asked me to perform oral sex on him," said a woman identified as Jane Doe No. 2.

She then paused, looked at Kelly, and asked, "Do you remember that?".

Jurors also previously heard how Kelly would compel victims to follow "Rob's rules", including that they call him "Daddy" and get permission to eat or go to the bathroom.

Kelly has been in jail since July 2019. He will likely be transported to a jail in Chicago, where he faces an August trial in federal court on child pornography and obstruction charges. He also faces various state charges in Illinois and Minnesota.

Here is a complete timeline of the allegations:

The DJ told Dr. Oz she was "starved excessively," often "slapped, kicked" and beaten and had to ask permission from "a runner" to use the bathroom.

During their two-year relationship from 2011 to 2013, Jones said Kelly told her he was "sexually abused" as a child by "a man in the neighbourhood".

"Later in the relationship, there were things that he would ask me to do to him, sexually, that I connected to the abuse," she said.

"And that’s when I would feel really ill doing it to him because I knew where it was coming from. It was some pretty graphic things." 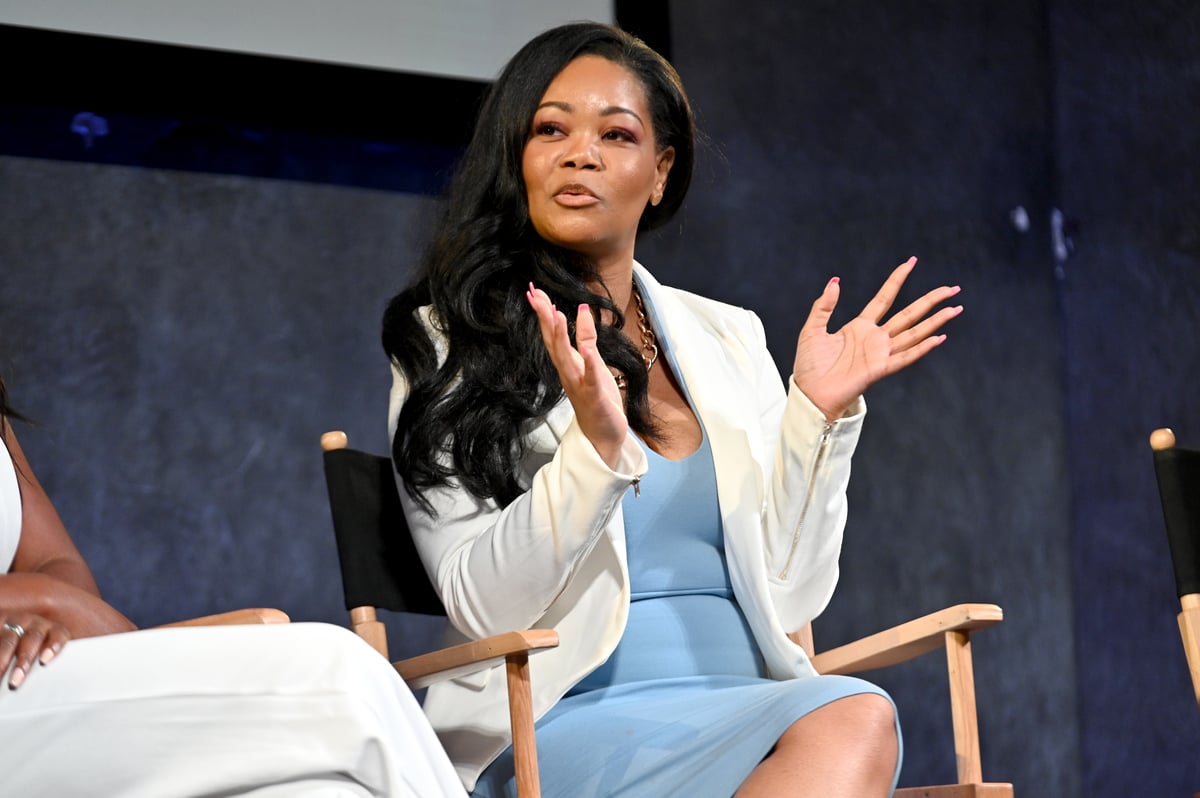 In January 2020, Kelly’s ex-girlfriend and former victim, Azriel Clary, spoke to The Sun about the ways Kelly allegedly abused his victims.

Clary moved in with Kelly when she was just 17. She became one of Kelly’s many live-in girlfriends and said she was forced to have group sex up to five times a day.

"I think that there’s hundreds of victims out there," she told the publication.

Clary alleged that she was often abused by Kelly, detailing one incident where he beat her with a shoe until she was "covered in welts". 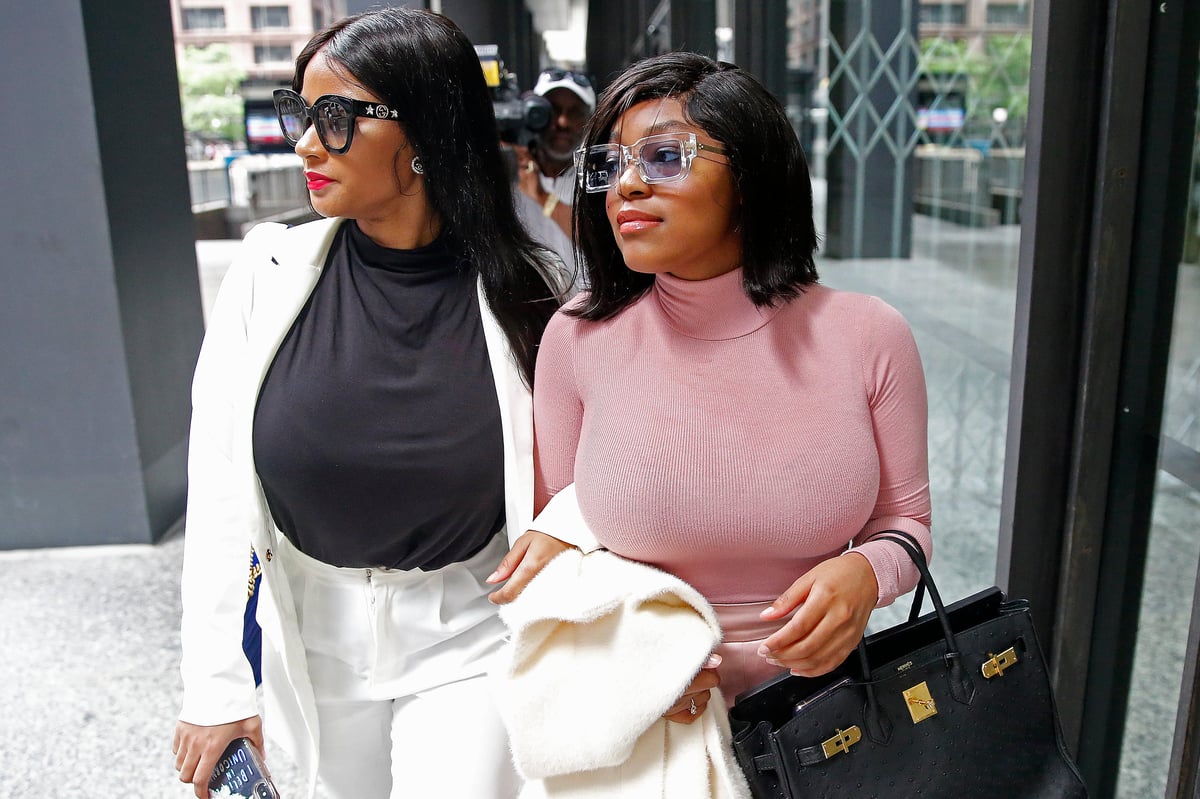 Prior to this interview, Clary had always maintained Kelly's innocence. In March 2019 she, and Kelly's other girlfriend Joycelyn Savage, told Gayle King on CBS This Morning that they were in a loving relationship with the singer. Looking back, she admitted she was "very naïve and very brainwashed".

"I definitely do believe that I was very naïve and very brainwashed and manipulated by him," she said. "And as much as I hate to say it, I'm woman enough and I'm grown enough to admit that yes, I was brainwashed and yes, I was manipulated. And yes, this man did have me wrapped around his finger. If he would have told me to jump, I would have said, 'How high?'"

In August 2020, three of his associates were charged with attempting to intimidate, harass or pay off alleged victims in the racketeering case against the singer.

The documentary series saw multiple women accuse the singer of sexual abuse, physical abuse and even starving them.

Brie Bryant on how “Surviving R. Kelly” was a moment that contributed to a movement, “We will carry the story of these survivors forever" #PowerOfWomenNY presented by @lifetimetv pic.twitter.com/ISjSAdaJQu

On January 18, 2019, Kelly's record company RCA dropped him as an artist following the release of the documentary.

In February that year, R. Kelly was charged with 10 counts of sexual abuse. Authorities confirmed the charges were in relation to four victims, with at least three of them being minors.

In March, R. Kelly denied sexual assault charges against him in a heated interview with CBS This Morning co-host Gayle King

In his first interview since the indictment, Gayle King asked Kelly about allegations that he had sex with women under 18 and that he was physically and verbally abusive.

"Not true," the Grammy-winning singer responded in a clip of the interview played on the CBS Evening News

In an exclusive interview with @CBSThisMorning, R. Kelly breaks his silence on sexual abuse claims from multiple women: "Their fathers and mothers told me, 'We're going to destroy your career.'" https://t.co/CZwcdFy7zB pic.twitter.com/iWqlw5fXHA

The singer grew angry and emotional as the interview went on, turning to make his argument directly to the camera. "That's stupid. Use your common sense," he said.

On the same day the interview aired, Kelly was arrested once again for failing to pay his ex-wife Andrea Kelly more than $160,000 in child support. He was later released when an unidentified person paid this sum for him.

In May 2019, the singer was charged with an additional 11 new counts of sexual assault against a teenage victim. Kelly was then arrested and placed in custody on further charges of sex trafficking two months later in July.

In 2018, the #MuteRKelly campaign was launched in an effort to encourage record label RCA to cut ties with Kelly.

The campaign also called on streaming services including Spotify, Pandora and Apple Music to remove his music from their playlists.

In the same year, the singer was also sued by a former partner who claimed he infected her with an STD intentionally.

In 2017, Buzzfeed published a report accusing the singer of trapping young women in a 'sex cult'.

The allegations came from the parents of several women and three former employees of Kelly. 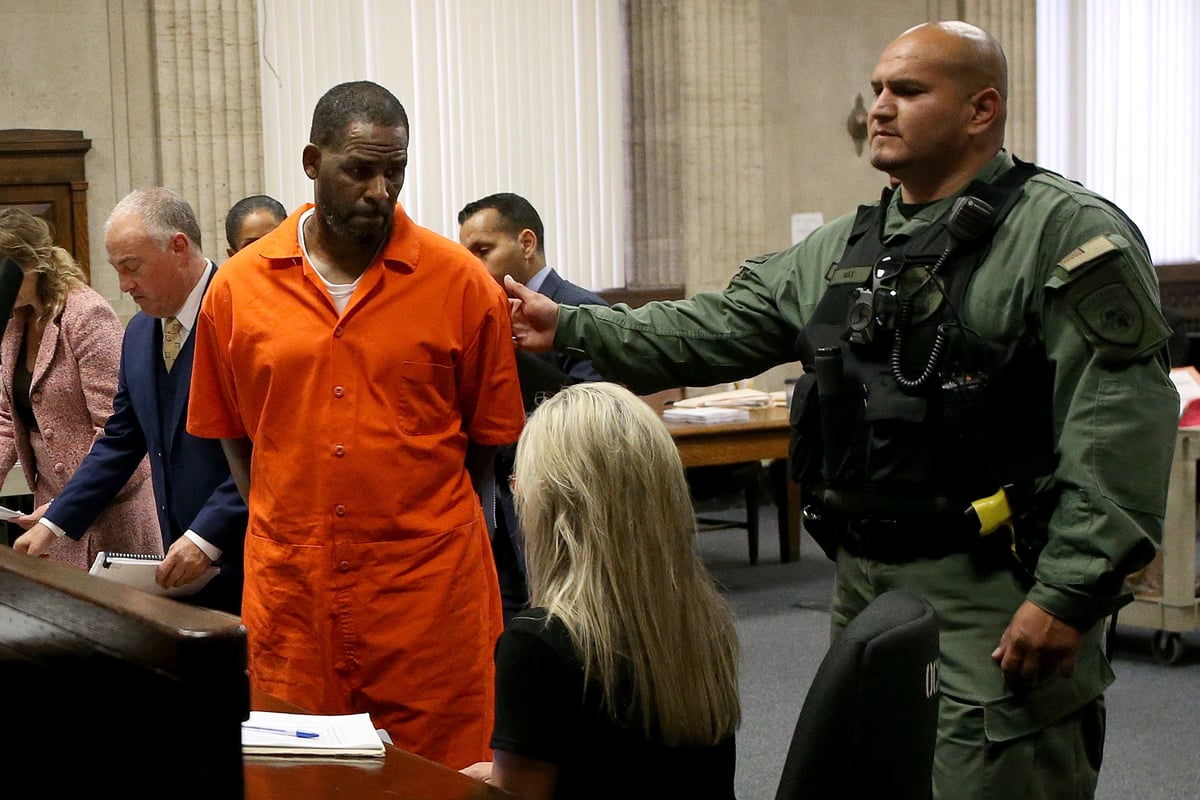 Kelly vehemently denied the allegations in the article.

Following the release of BuzzFeed's report, Jerhona Pace spoke out about having sex with Kelly when she was underage.

Another woman, Kittie Jones, also alleged the star had physically abused her and coerced her into a sexual relationship.

In 2005, Kelly's second wife Andrea Kelly was granted an emergency protective order against Kelly after she alleged he physically abused, harassed and stalked her.

Andrea, who has three kids with the singer, married the star in 1996.

The pair separated in 2005 as Andrea filed for a restraining order.

Chicago woman Patrice Jones claimed the singer impregnated her when she was underage. She was later forced to have an abortion.

Another woman, Montina Woods, alleged Kelly had videotaped them having sex without her knowledge or consent.

Both cases were settled out of court and non-disclosure agreements were issued to both women.

Later on in the year, Kelly was charged with 21 counts of making child pornography when he was accused of filming a minor participating in a number of sex acts – including one scene where a woman was reportedly urinated on.

The jury eventually found the singer not guilty, as they were unable to prove whether the girl videoed was underage.

Not long after, he was charged with another further 12 counts of making child exploitation material when police seized a camera at Kelly's property which reportedly showed him having sex with a minor.

The charges were later dropped as Kelly's defence team argued that police didn't have enough evidence to justify searching his property.

Listen to Mamamia's daily news podcast, The Quicky, below. Post continues after podcast.

In 2001, R. Kelly was sued by Tracy Sampson, an intern at Epic Records, who claimed he induced her into a sexual relationship with him when she was underage.

"He often tried to control every aspect of my life including who I could see and where I would go," Sampson said, according to court documents.

In 1996, Tiffany Hawkins sued R. Kelly for "emotional distress" during a lengthy relationship with the performer.

According to court documents, Hawkins began having sex with R. Kelly in 1991, when she was just 15. Kelly was 24 at the time.

A spokesperson for Kelly later claimed that she had "no knowledge" of Hawkins' allegations against the singer.

The illicit relationship was first exposed when Vibe magazine published a copy of a marriage certificate, which showed the pair had wed in Illinois on August 31, 1994. The document stated that Aaliyah was 18 years old at the time, when she was in fact just 15. 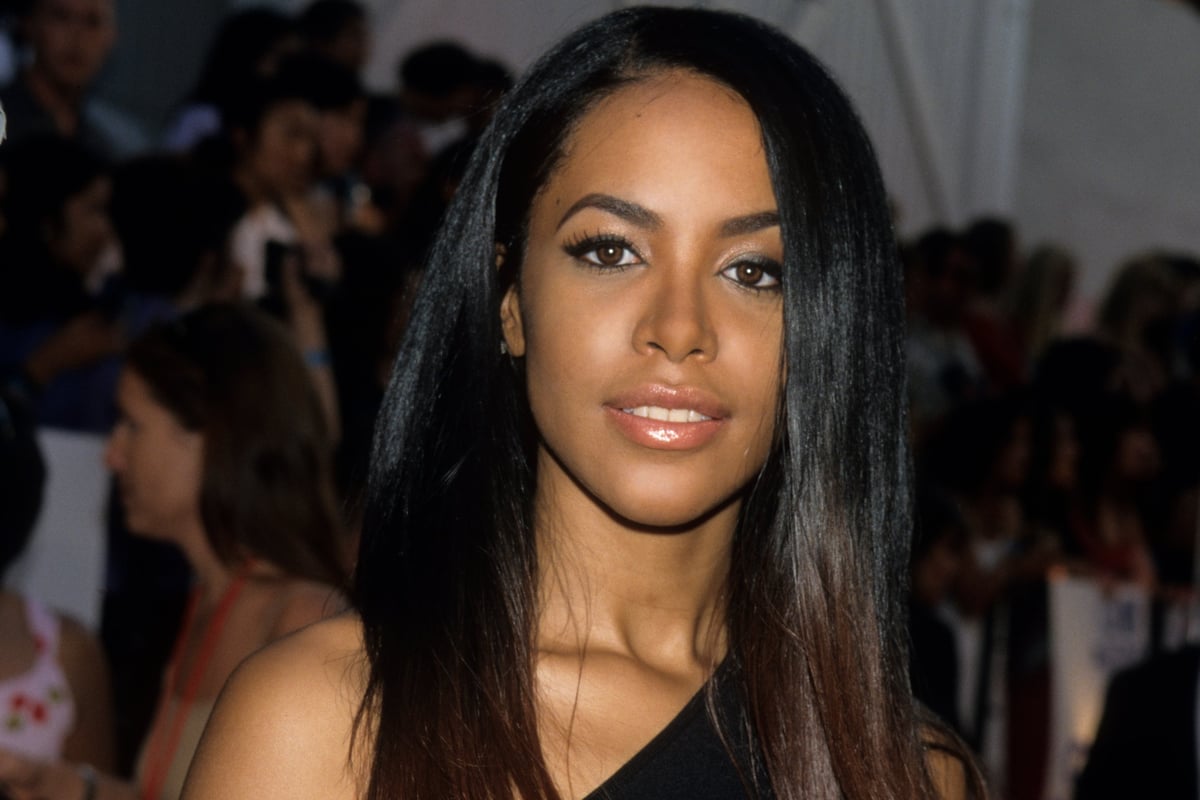 Speaking on the documentary, R. Kelly’s former personal assistant, Demetrius Smith, claimed to be present for the ceremony: "I’m not proud of that. I had papers forged for them when Aaliyah was underage. It was just a quick little ceremony. She didn’t have on a white dress. He didn’t have on a tux. Just everyday wear. She looked worried and scared."

Smith claimed the marriage was annulled by her parents the following year.

It's believed Aaliyah cut personal and professional ties with R. Kelly after the annulment. She refused to speak publicly about the relationship in the years that followed.

Reply
Upvote
1 upvotes
Some people forfeit their right to live in society.
C
cat a year ago