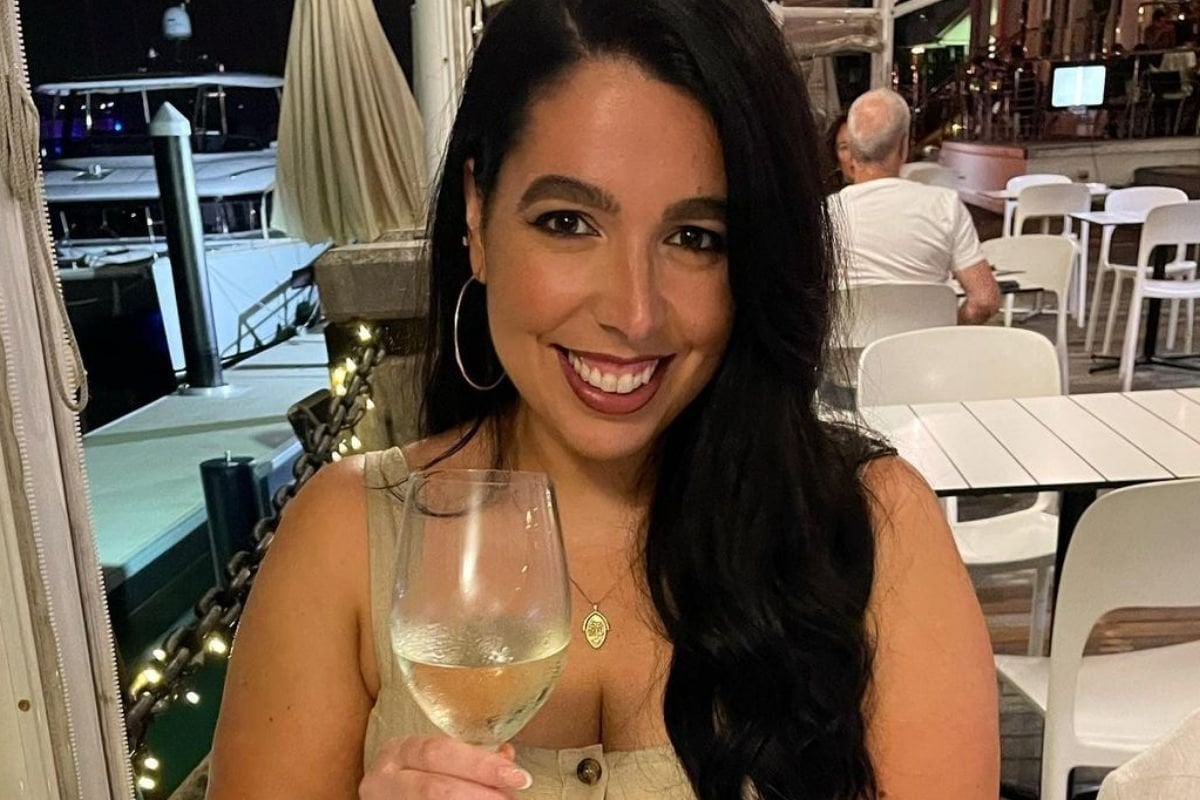 I was 21 years old and three bites into my bagel – extra pickles, of course – when I noticed a woman sitting at the next table, looking my way.

She was middle-aged, bustling with joy, and eager to start a conversation. I was… eating my bagel… and as anyone who has frequented the Melbourne institution of Glick's will know, bagels are a near religious experience and one’s full attention is required. Please.

Alas, she seemed pleasant, and so I smiled and chatted along. But before long, I could feel the conversation veering into different territory, and oh okay, yes, it’s time for the interrogation now.

“Are you married?,” she enquired with a smile, her eyes quizzing my face.

Mia shares about her wedding day. Post continues after video.

I chortled on my mouthful, “Nooo!”.

“Oh, but you have a boyfriend?,” she nodded, eyes brimming with hope.

Pause. Her brow furrowed with concern.

I detected a faint whiff of pity. And then, she found the most hopeful words she could muster:

“That’s okay, dear. Even though time is getting on for you, you still might find someone yet.”

“Who cares!,” I hear you say. “Laugh it off!”. “She’s a stranger! It doesn’t matter”. And yes, it’s true, and I did… but also, I never forgot it too. Because that moment jolted me. It was the very first moment, I felt the pressure of ‘next’. The pressure of what ‘should’ be: The pressure to find someone. To settle down.

That despite everything that I was and the things I’d achieved, I was being perceived through a lens of lack; of what I didn’t have, or rather, who I didn’t have… yet.

I’ve been fortunate. I was raised by a mother who is open-minded and supportive. Who has never put pressure on me to be something other than who I truly am, or the life that I want.

But I can’t always say the same for my community; my dear Jewish community that I adore, but can push my buttons in the way only a beloved but annoying family member can… You know?

I’ve been set up on a blind date with someone purely because he had a PhD, and convinced to give another guy a second date just because he is a lawyer.

I’ve had well-meaning parents of friends raise a glass to me, publicly declaring their hopes that I “find someone soon”.

So then, you might think that when my partner and I got together three years ago, finally everyone would breathe a collective sigh of relief.

But then, almost instantly, the pressure of ‘next’:

“That’s very nice… So, when is the engagement?”

Look, I’ve had friends – Argentinian, Greek, Vietnamese, Russian, Indian and Lebanese – with not dissimilar experiences. Next level pressure of 'next'. Every culture has their own narratives that define and bind identity, and for my community, persecuted and threatened for thousands of years, Jewish dating means Jewish marriage and Jewish continuity. Another generation assured. Tradition continues for a marginalised minority.

But, when are the expectations of ‘next’ ever enough?

Because I’ve had girlfriends – of all backgrounds – slip a ring on their finger, and immediately, be fired with, “When is the wedding?”

No sooner after they’ve cut the wedding cake, they’ve been charged with, “When is the baby?”

And still bearing the stitchers from giving birth, “When is the next baby?”

Since when was life reduced to a series of checked milestones? Are we just racing to an invisible finish line? And what about when there is nothing… 'next'?

Because even I know, a checklist of ticks, does not necessarily equate to a life well lived.

Instead, it sets us up against a generic set of measurables. If not attained – by choice or circumstance – we feel ‘less than’, and others feel entitled to an explanation.

And why are the life choices of women deemed public knowledge, open to discussion? And yes, I say women because, even my guy friends admit – they seldom receive the same incessant questioning as we do.

It’s not a zero-sum game. But perhaps that’s why so many of us – accomplished, successful, beautiful women – often feel like we’re failing on some front. If we don’t “have it all”, then we have nothing?

My life feels full. At 33, I am grateful and proud with all I have achieved in my career, the travels I've had, and the very special people (and pets!) with whom I share my days.

Yet after three years of happily dating, I’m asked almost weekly, when will I get engaged…

And so I lend you some wisdom from my Jewish mother – one of the best retorts she’s coined, perfectly accompanied with a wry smile.

“You don’t neeeeed to know!”

B
bondi girl 4 months ago

Reply
Upvote
I'm frequently having this conversation with friends - married vs singles and we've come to the conclusion that people who marry early didn't have other ambitions or got scared of being alone and settled. That's fine if people want to get married but it isn't actually compulsory. Personally I'm loving being single at 36. I'm doing the things that I wanted to and honestly, if I didn't I would never be happy in a marriage if I didn't follow my passions. I also wouldn't be comfortable bringing kids into a world if I was only going to resent them.
My point is, don't get married and have kids just because that's what "society" says you should do. It's a big commitment so only do it when you are 100% ready and want to.
E
em 4 months ago

Reply
Upvote
2 upvotes
I feel this so hard. I'm not Jewish, but I think most women will have some experience with the pressure for 'next'.
In 2017 I met my now-husband. His parents were over the moon, and immediately the grandchildren comments started. We got engaged in 2019, and married in 2020. Since then, we've struggled with infertility. But of course the baby comments continue to come thick and fast. Christmas just gone I was asked by three relatives when I would be giving my in-laws a baby - at that point, we were starting the IVF process. Last month I underwent my first round of IVF, which ended in an early miscarriage. Yesterday on a work call, I had someone tell me "you don't want to wait too long" when it came to children, and "you're not getting any younger" (I'm 32). My heart broke. But really, one of my fears is being "too old" by society's standards.
The pressure for 'next' needs to stop. From family, from friends, from society in general. Women are not just baby-making machines.
C
cat 4 months ago

Reply
Upvote
2 upvotes
@em the whole concept of "giving grandchildren" is so gross, its such a hangover from when women were literally bought based on their potential to breed heirs. Surely in the 21st century we can all agree no one is required to "give" anyone else children.
S
simple simon 4 months ago

Reply
Upvote
3 upvotes
@em a media publication made a public announcement that when they were interviewing women who'd recently married, they were not going to ask them if/when they were having kids, for this very reason. I believe society needs to follow this stance.
E
em 4 months ago

Reply
Upvote
1 upvotes
@simple simon I did see that! And it’s definitely a step in the right direction. Influencers calling it out on social media too (Laura Henshaw and Nadia Fairfax are two I can think of who recently got married and have been inundated with baby questions). I’m hopeful the next generation will be a whole lot more respectful.
E
em 4 months ago

Reply
Upvote
2 upvotes
@cat it is so gross. And it really minimises your value as a person. I feel like my twenties were spent working for the career I now have, yet my worth now feels tied to my ability to procreate. It’s so messed up. I want children, but I still hate how society makes women feel as though that is all they’re meant for.
News
General
Opinion
True Crime
Politics
Sport
Explainer
Entertainment
Celebrity
Reality TV
Movies
TV
Books
Rogue
Royal
Lifestyle
Beauty
Fashion
Weddings
Home
Wellness
Health
Fitness
Travel
Food
Family
Before The Bump
Pregnancy
Baby
Kids
Teens
School
Parent Opinion
Work & Money
Money
Finance
Career
Lady Startup
Relationships
Sex
Dating
Separation
Friendship
Family
Real Life
Couples